For some, steel may be nothing more than an alloy of iron used as a structural and fabricating material. But when steel is combined with compassion and collaboration, it can turn into something greater and more powerful. The POSCO 1% Foundation and their “POSCO Steel Village” project are just one example.

The POSCO 1% Sharing Foundation was created in 2013 to mobilize support from POSCO Group employees and subcontractors. Volunteers donate 1% of their monthly salary to the foundation, which then goes to fund projects for communities that need support the most.

The Foundation has completed a number of meaningful projects under this venture utilizing the company’s advanced steel products, such as PosMAC and PosCozy. From Korea to Myanmar and Vietnam, POSCO employees have helped with the construction of numerous houses, playgrounds, and villages.

In Hmawbi, a village outside of Yangon, Myanmar, villagers were struggling to cross the wooden bridge they had used for years. The wooden planks were rotting with holes making it unsafe and difficult to cross. During the rainy season, it was near impossible to use. In order to help the residents of Hmawbi commute safely, the POSCO 1% Sharing Foundation decided to replace the old bridge with a new one made of steel. 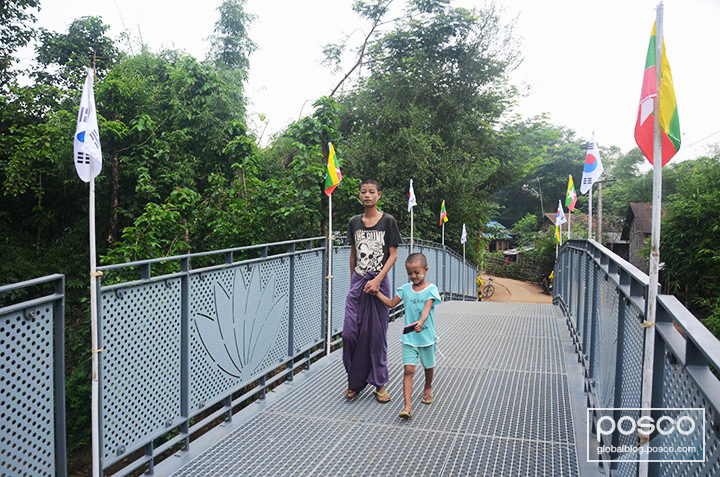 The newly built bridge, 3 meters wide and 20 meters long, utilized POSCO steel plates and PosMAC, a World Premium Product known for its unique strength, lightweight, and durable properties. On May 24, the foundation completed the construction of the steel bridge with the help and collaboration of the POSCO 1% Sharing Foundation. Over 150 people including POSCO employees, residents of Hmawbi, and other partners in Myanmar gathered to celebrate the completion of the project.

On June 13, POSCO Group holds a ceremony for completing the construction of 104 steel houses in Ba Ria-Vung Tau Province.

In response to the request of Vietnam’s government to build a residential complex for the underprivileged in the Ba Ria–Vung Tau Province, POSCO Group began building houses in Vietnam’s largest business clusters near Ho Chi Minh City in 2014. Over the course of three years, over 1,500 POSCO Group employees and student volunteers have participated in various construction work, including a steel framing job, building walls, and painting, to help build houses for low-income families.

With donations from the POSCO 1% Foundation and using POSCO’s advanced steel solutions, the project was completed on June 13. Together with Habitat for Humanity, the POSCO 1% Sharing Foundation built a total of 104 steel houses in Ba Ria-Vung Tau Province for 500 low-income families. While POSCO SS-VINA provided H Beams for building the house frames, POSCO A&C was in charge of supplying insulation materials that can absorb rain impact noise and block direct sunlight as well as designing the natural ventilation system.

In Korea, the POSCO 1% Foundation built Donggurang Steel Land, an indoor playground for children, and donated it to the local government in Incheon. Previously in 2013, the foundation established an agreement with the Incheon Government Office to build public facilities for children of dual-income families and began the construction. The playground includes an artificial rock climbing wall, a smart gym board, and other facilities that provide children with a safe environment in which to play. 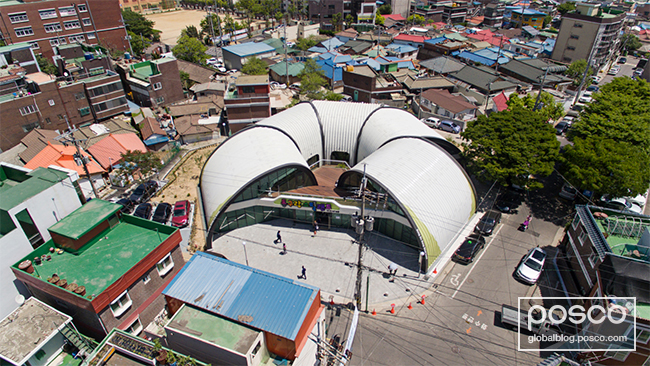 The two-story facility was designed and constructed using POSCO’s own materials and technology. While the roof was built with corrugated steel plates with corrosion-resistant steel, the outer wall was constructed by applying a steel curtain wall system. In order to reduce noise between floors, POSCO’s flooring system, PosCozy, was also applied.

POSCO hopes that the newly built bridge and facilities can represent POSCO’s strong desire to connect community goals with the company’s resources and expertise to accomplish healthy and sustainable neighborhoods. Building on years of successful contributions to local communities around the world, POSCO will continue to strive to become an exemplary case of sustainable growth.