On January 16th, President Geun-hye Park, who is visiting India as a national guest, held a summit conference with India’s Prime Minister Manmohan Singh and received approval for Korean enterprise to support the Indian government in constructing a steelworks in the State of Orissa.

Accordingly, POSCO expects to speed up the administrative approval processes, including mining rights approval, and construction site securement which has been in progress since a local subsidiary was established in August 2005.

POSCO signed an MOU with the State Government of Orissa in June 2005 regarding steelworks sites, mining rights, and the provision of exclusive ports, and implemented a 12 million ton steelworks construction project with a 12 billion USD investment.

However, lawsuits concerning iron ore exploration rights arose as well as delays in securing sites owned by the state, creating difficulty in fully implementing the project.

With President Park’s assistance, POSCO was able to re-acquire environmental authorization and approval for steelworks construction, the first of which expired in 2012, 5 years after approval in 2007.

Accordingly, POSCO secured the legal ownership of 11,239,669㎡ of land on which it plans to construct a 8 million ton steelworks, and can continue the process to receive approval from the India Central Government for iron ore exploration rights in areas approximately 300㎞ inland from the steelworks, raising expectations for smooth steelworks project implementation.

POSCO plans to focus on securing mining rights timed in relation to steelworks completion, considering the time needed to complete mine development after receiving iron ore exploration rights approval, and will continue to prepare the basis for steelworks construction including site securement and infrastructure connection.

The steelworks to be built in the state of Orissa is competitive, with plans to apply environmentally-friendly FINEX technology for which POSCO holds patents, and will have a direct employment effect of approximately 18,000 hires, with another 870,000 jobs likely to be created in related industries. Once the Orissa steelworks is completed, quality steel materials can be provided, ultimately contributing to steel demand industry development and the regional economy and that of India overall.

Steel processing centers have also been established in Delhi, Pune, and Chennai to provide quality services for automobile and home appliance demand, while a logistics subsidiary is in operation at Diggi Harbor near Mumbai.

In addition to the steel project, POSCO Family companies including POSCO E&C, Daewoo International, POSCO PLANTEC, and POSCO ICT are making efforts to strengthen cooperation in various industries essential to the growth of India’s economy, with a total of 14 local subsidiaries, approximately 100 dispatched employees, and 1,540 local hires, contributing to regional growth and job creation. 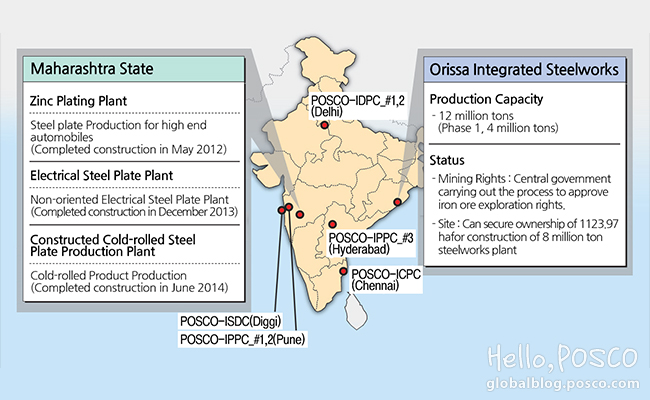