Glienicke Bridge is a bridge like no other. Walking across the steel structure, on the far western outskirts of Berlin, was a complicated procedure from 1961 until 1989. The Glienicke Bridge, or Glienicker Brücke as it’s called in German, connects the cities of Potsdam and Berlin. It was one of the most renowned monuments of the Cold War. Crossing it involved negotiations between the two superpowers of the time, the United States of America and the Soviet Union. The bridge is featured in the Oscar nominated movie “Bridge of Spies”. Oscar season is upon us, so what better time to highlight this extraordinary bridge. To appreciate the uniqueness of Glienicke Bridge we should start at the very beginning.

The History of Glienicke Bridge 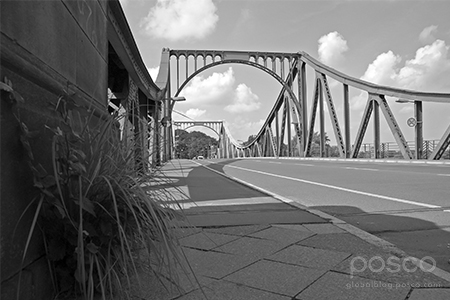 The first bridge built across the Havel River was wooden, it was constructed in 1660, but by the early 1800s, a new bridge was needed to accommodate the massive increase in traffic between Berlin and Potsdam.

The architect Karl Friedrich Schinkel designed a brick and wood bascule bridge, which was finished in 1834. In the year 1900, tens of thousands of vehicles crossed the cumbersome movable wooden bridge. The narrow structure was not capable of handling such an increase and it caused heavy traffic.

The Johann Caspar Harkort Company of Duisburg submitted the winning design, a modern, iron bridge with the outer appearance of a suspension bridge. The new steel bridge was officially opened in November 1907. This bridge is still standing today and has many stories of division and unification to tell.

In April 1945, during the Second World War, an unexploded shell detonated near the Glienicke Bridge, leaving it badly damaged. After the War, a makeshift wooden bridge was built parallel to the damaged steel structure in order to restore the important road link between Berlin and Potsdam.

The reconstruction of the steel bridge was completed in 1949, after the division of Germany. The East German government called it the Bridge of Unity because it straddled the border between East and West Germany and, right in the middle of the bridge, a white border line was drawn. The thin white line of paint is still visible today.

In May 1952, East German authorities officially closed the bridge to citizens of West Berlin and West Germany. In August 1961, after the construction of the Berlin Wall, the bridge was also closed to East German citizens. From that moment on, only allied personnel were allowed to access the bridge, crossing it became next to impossible.

Around the same time, the bridge lost its name Bridge of Unity and instead became the Glienicke Bridge named after the nearby Palace of the same name. 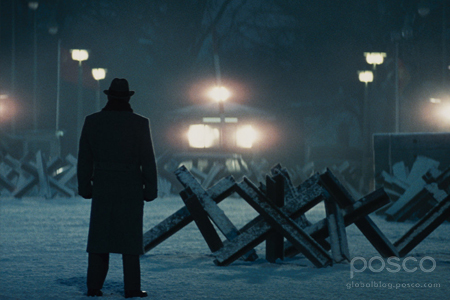 During the Cold War, Americans and Soviets used the Glienicke Bridge as a meeting spot for the exchange of captured spies. The bridge gained the nickname the Bridge of Spies.

The first exchange took place in February 1962. The Soviet spy, Colonel Rudolf Abel, was exchanged for U.S. spy-plane pilot, Francis Gary Powers, who was shot down in his U2 spy plane while crossing over the USSR in 1960.

A total of 40 prisoners were exchanged between Western and Eastern powers on the Glienicke Bridge. It’s no surprise then that the bridge has frequently appeared as a venue for prisoner exchange. Today, Glienicke Bridge is a popular backdrop for television commercials and movies.

One of the most successful movies to use the Glienicke Bridge as a shooting location was the 2015 film “Bridge of Spies.” The blockbuster directed by Steven Spielberg and starring Tom Hanks features a prisoner exchange on the famous steel bridge as a major plot element. It has been nominated for Best Movie at the 2016 Oscar Academy Awards, due to kick off on Sunday, February 28 in Hollywood, U.S.A. The simple elegance and pleasing symmetry of this historic steel bridge, as shown in “Bridge of Spies,” captures the viewer and brings them back to Cold War Germany. For this reason, many steel lovers are hoping it can win the top prize.

A Steel Structure to Remember 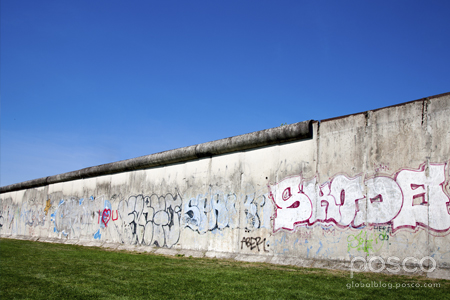 But the most iconic memory of this bridge is its reopening to the public. At 6 p.m. on November 10, 1989, one day after the opening of the Berlin Wall, the Glienicke Bridge was reopened to pedestrians. The border fortifications and barricades were later dismantled following the unification of Germany on October 3, 1990. Since then Glienicke Bridge has reunited loved ones and become a focal point of unification. To this day, the strong steel structure it’s remembered as bridge like no other.