So how is the hydrogen put to use once it is produced and transported? A simple application would be for automotive fuel. A fuel cell electric vehicle runs on electricity fueled by automotive hydrogen fuel cells. Likewise, with fuel cells for power generators or hydrogen gas turbines, it becomes possible to generate electricity for industrial and domestic use from hydrogen. But did you also know that you can make steel with hydrogen? Though it might sound a bit unfamiliar, this technology, “hydrogen-based steelmaking technology,” is an innovative technology that produces iron with hydrogen instead of coal. Since coal, which is a fossil fuel, is not used, carbon dioxide (CO2) generation is close to zero.

Last year, Goldman Sachs forecasted that by 2050, industrial hydrogen, including hydrogen-based steelmaking, will account for 18% of global hydrogen demand. Considering that demand for hydrogen for power generators is expected to be 42%, the proportion is higher than anticipated. Of course, various tasks should be preceded for hydrogen-based steel to be commercialized, such as R&D and demonstration of related technologies, adjusting the price of hydrogen for industrial use, and establishing a hydrogen supply chain. However, the future is bright for those endlessly challenging.

With the last article of the [Exploring Hydrogen with POSCO] series, Let’s go on a journey to the future hydrogen steelworks of 2050, constructed with POSCO’s unceasing strives and innovations. POSCO Newsroom introduces carbon-neutral steelworks where steel is produced without generating any CO2 generation and the technology that makes this possible — Hydrogen-based Steelmaking.

So what reducing agents are being used as of now? It is carbon monoxide — gas generated from coal. When iron ore and coal are put into the blast furnace and melted at 1500°C or higher, the generated carbon monoxide (CO) triggers a reduction reaction (Fe2O3 + 3CO → 2Fe + 3CO2) that separates oxygen from iron ore (Fe2O3), and CO2 is generated at this stage.

Replacing the reducing agent coal with hydrogen might seem like a simple change, but it marks the beginning of a huge transformation. Needless to say, the steelworks will no longer generate any CO2, a greenhouse gas, and great changes will be made to the conventional steel production process as well. So, what will the steelworks look like in 2050 once the hydrogen-based steelmaking technology is applied?

The first change is that the blast furnaces will disappear at the steelworks. Since the process of melting coal and iron ore in a single blast furnace is no longer needed, other attached facilities, such as the sintering plant and coke plant, will be eliminated along with the blast furnace. But, imagine a steelwork without a blast furnace. Where would the reduction reaction between hydrogen and iron ore take place then? This is where “Fluidized Reduction Furnace” steps in.

The fluidized reduction furnace, a facility that reduces iron ore to produce DRI, already exists in POSCO and can be found in its own FINEX (Fine Iron ore Reduction) process. In FINEX, iron ore fine and coal aren’t put into the blast furnace, but instead, they go through the fluidized reduction furnace and the melter gasifier to be processed into molten iron. This technology is the core technology in realizing hydrogen-based steelmaking. However, there is a difference between the two: FINEX uses 25% hydrogen and 75% carbon monoxide generated during the process as reducing agents, whereas hydrogen-based steelmaking (HyREX: Hydrogen Reduction) uses 100% hydrogen.

However, the blast furnace isn’t the only facility to disappear. Previously, molten iron produced in the blast furnace was converted into refined molten iron through a converter. However, in the case of hydrogen-based steelmaking, the DRI produced in the fluidized reduction furnace goes through an “electric furnace,” not a “converter,” hence the converter is expected to disappear as well. So it can be said that in hydrogen-based steelmaking, the fluidized reduction furnace and the electric furnace take the place of the conventional blast furnace and converter. 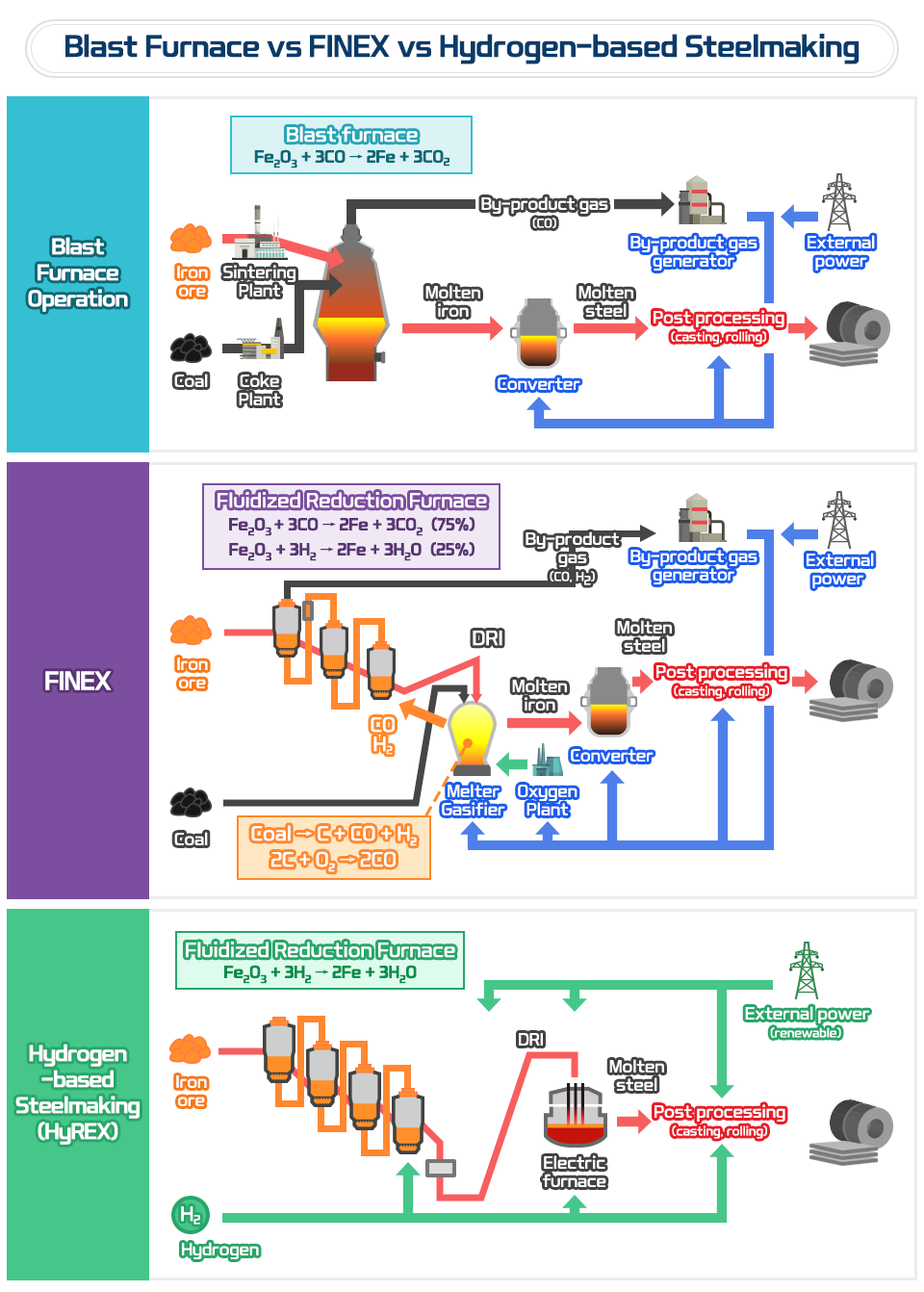 Q. Blast furnace operation, FINEX, and Hydrogen-based Steelmaking. How are they different?

A. In the blast furnace operation, iron ore and coal are first processed at the sintering plant and coke plant into appropriate states, respectively, and then go into the blast furnace. The blast furnace produces molten iron, which is then put back into the converter to make them into molten steel. Carbon monoxide is used as the reducing agent here.

In FINEX, where no blast furnace is in use, the iron ore fine is put into the fluidized reduction furnace to produce DRI. The DRI then goes into a melter gasifier, where it changes into molten iron. The molten iron goes through a converter and becomes molten steel, with which various products are created. The reducing agent in this processing case is 75% carbon monoxide and 25% hydrogen — all generated in the melter gasifier with coal input.

Hydrogen-based steelmaking neither requires a blast furnace nor a converter. The raw materials — iron ore and hydrogen — go into the fluidized reduction furnace and come out as DRI, which is then made into molten steel through an electric furnace to create steel products. The reducing agent utilized here is 100% hydrogen.

The second change at the steelworks is the increased dependency on renewable energy. “Green hydrogen” is a prerequisite for the basic concept of hydrogen-based steelmaking. This means that neither the hydrogen inserted into the fluidized reduction furnace nor the electricity production process that drives the facility should cause any carbon emission. However, as seen in [Exploring Hydrogen with POSCO #1], renewable energy, such as solar and wind power, is essential to produce green hydrogen. Therefore, those countries that cannot produce green hydrogen on their own will have to rely on imports in the future.

Solar and wind power are heavily influenced by geopolitical factors that determine sunlight and wind speed. As of 2019, the cost to generate solar energy in Korea is 163 KRW per kWh, which is 10 times more expensive than that of the Middle East. That is why Australia and the Middle East are expected to be areas to mass produce green hydrogen. According to data released by global research company Bloomberg NEF in March 2020, the global demand and supply outlook for green hydrogen in 2050 showed clear division by region. In particular, the dependence of Asian regions, including Korea, on Australia and the Middle East, which are relatively close geographically, is likely to increase. Thus, the importance of participating in green hydrogen production projects and finding partners with these regions will gradually grow more in the future.

▲ The forecast for green hydrogen trade in 2050 according to countries (Source: Bloomberg NEF, Hydrogen Economy Outlook, 2020.3.30)

In Europe, the proportion of low-carbon power generation, such as renewable energy, hydropower, and nuclear power, is already large. Germany, which announced its national hydrogen strategy last year, already covers more than 50% of its total power consumption with renewable energy, including solar and wind power. In January 2021, the European Union also announced that the proportion of renewable energy (38%) exceeded fossil fuels (37%) for the first time. European steelworks have a history of over 150 years, thus possessing many blast furnaces and related equipment that have already reached the end of their lives. Also, small-sized facilities with an annual production of fewer than 1 million tons account for a large quantity, making the transition to hydrogen-based steelmaking more active than others. On the contrary, most of the blast furnaces in Asian steelworks, including those in Korea and Japan, are of large scale with an annual production of 5 million tons, and their history is shorter, so there are many cases where the lifespan of the blast furnace remains to be several decades or more.

Currently, POSCO is participating in the government-led development of the CO2 reduction hybrid steelmaking technology based on blast furnaces, which has been underway since December 2017, and seeking various ways to reduce CO2, such as partially replacing coal with hydrogen-containing resources or carbon-neutral reducing agents such as biomass*, and partially reducing iron ore before putting them into the blast furnace. By applying this technology to blast furnaces, it becomes possible to reduce CO2 emissions by about 10% compared to conventional blast furnaces. POSCO Newsroom will cover this CO2 reduction hybrid steelmaking technology next time.

*Biomass: living organisms in general, including plants that synthesize organic matter by receiving solar energy, and animals & microorganisms that feed on these plants

POSCO has declared to achieve carbon neutrality by 2050 last year. Accordingly, in the short term, it plans to develop technology to reduce CO2 emission and expand its low-carbon product portfolio while, in the long term, achieve carbon neutrality by realizing hydrogen-based steelmaking. Since hydrogen-based steelmaking technology requires a long time and enormous cost, POSCO is promoting joint R&D for hydrogen-based steelmaking technology with domestic and foreign steelmakers. In his speech at the World Steel Dynamics (WSD) conference last October, POSCO CEO Jeong-Woo Choi called for joint action of the steel industry, such as promoting the Green Steel Initiative and sharing information & collaborative technologies regarding carbon reduction.

Hydrogen society is fast approaching. And at the center of this is POSCO, which continues to pioneer and innovate towards carbon-free steelworks with its world-class steel technology.