“We must beat Asian countries.”

In June 2020, Germany’s Minister of Economic Affairs and Energy, Peter Altmaier, said the above when briefing the national strategy. According to the National Hydrogen Strategy, Germany is to develop all technologies for producing, transporting, storing, and utilizing hydrogen in Germany. Investment in hydrogen power generation alone reaches 12 trillion KRW. How far are Asian countries leading in this area then? Korea established an eco-friendly hydrogen economy master plan in 2004 and announced a hydrogen economy roadmap in 2019. Japan fabricated a hydrogen fuel cell strategy roadmap in 2014, while China announced the China Hydrogen Initiative in 2017. Additionally, in July 2020, Korea announced the “Korean New Deal” and plans to invest about 73 trillion KRW (43 trillion KRW at government expenditure) for the Green New Deal, out of a total investment of 160 trillion KRW. And 24 trillion KRW will be invested at government expense for new renewable energy.

The announcement of Germany to develop all hydrogen technologies from production to utilization has two implications. One is that the hydrogen business model is considered as an entire process that works as a value chain rather than viewed as in individual phases of production, transport, storage, and utilization. The other is that the success of the hydrogen business ultimately depends on the technology that deals with hydrogen.

In December 2020, POSCO announced plans to achieve “Carbon Neutrality” by 2050 and a green hydrogen business model. By 2030, POSCO will focalize on equipping itself with hydrogen production capabilities and core technologies and nurture the hydrogen business as the group’s growth engine. And for this, strengthening its technological capacities for hydrogen is essential, which includes developing steel products for producing, transporting, storing, and applying hydrogen, increasing byproduct hydrogen production facilities, developing core technologies for hydrogen, and also hydrogen-based steelmaking technology.

Then what are some of the technologies related to hydrogen? In the first part of “Exploring Hydrogen with POSCO,” we looked at the relationship between hydrogen production and steel. In the second part today, we will look at steel products for hydrogen transport applied according to the different states of hydrogen and the key material in hydrogen production and application technology — the stainless steel separator.

First, the most crucial factor when dealing with hydrogen in a gas state is “pressure”. When the pressure rises, hydrogen penetrates and degrades the metal, causing “hydrogen embrittlement,” which eventually breaks the metal. Molecular hydrogen (H2) cannot penetrate metal, but atomic hydrogen (H) is so fine that it can penetrate metal. Thus, when the pressure increases, the number of these atoms increases, resulting in hydrogen embrittlement.

However, as the pressure of hydrogen increases, its volume decreases and results in better transport efficiency. So the technology is evolving to enable materials to endure the increasingly high pressure of hydrogen better. For example, the simple pipeline for hydrogen transport can currently withstand around 20 bar but extends to 100 bar to increase transport efficiency. In general, fuel cell electric vehicles should be able to withstand 700bar and hydrogen stations 99 bar. Then, what does 700bar mean? “Bar” is one of the units to measure pressure, and it refers to the air pressure 100m above sea level. For instance, if your waterproof wristwatch reads 10bar, it means that it can withstand a depth of about 100m. So, 700bar is an unimaginable amount of pressure — the pressure you experience at 7,000m. Converting 700bar into weight is 713.8kg/㎠, so in other words, it is similar to the pressure received when ten adults weighing 71kg stands on a small area the size of 1㎠. 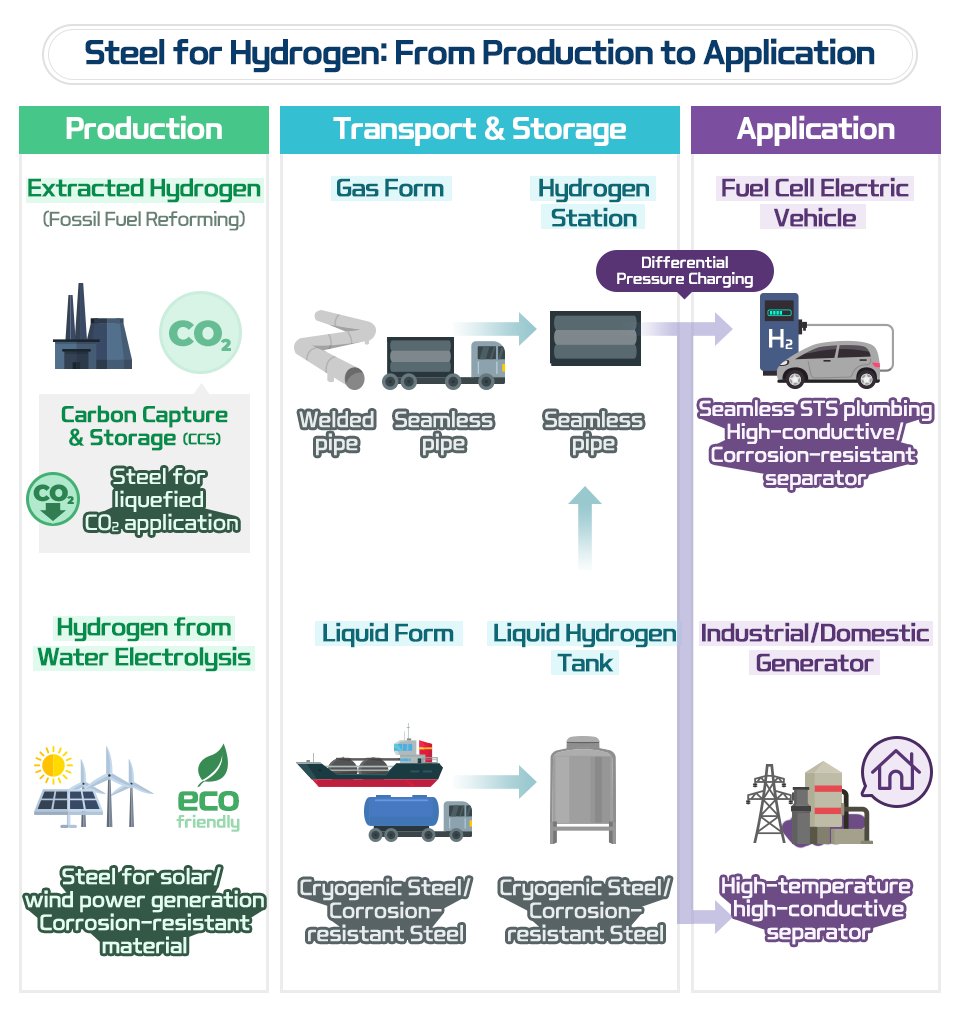 Unlike hydrogen vehicles that require weight reduction, the transport pipes and storage containers of hydrogen stations can withstand 990 bar pressure even with carbon steel, and the steel pipes used here are seamless pipes. Seamless pipes withstand pressure better than conventional welded pipes. The reason for this is because seamless pipes are made with round hollow steel pipes without welding, so they have no seams. High-pressure hydrogen storage containers are manufactured by expanding the diameter of seamless pipes, and the 990 bar containers use large-diameter seamless pipes that are currently not manufactured in Korea and depend entirely on imports. It shows that the localization of materials, parts, and equipment is paramount. Accordingly, POSCO plans to cooperate with seamless pipe manufacturers not only in Korea but overseas as well to prepare for the expanded steel demand of hydrogen pipes and containers.

The most important factor when dealing with liquid hydrogen is “temperature”. When hydrogen is cooled to -253°C, its volume is reduced to 1/800 compared to its gaseous state, so transporting it in large quantities becomes possible. This also means that the tank containing liquefied hydrogen must be fabricated with cryogenic steel that can withstand -253°C. Liquefied hydrogen transport vessels have not yet been demonstrated worldwide, and Japan has built the only 116m long demonstration small ship.

Green Hydrogen is the ideal energy source for a “Zero CO2” society. The most important part when producing this Green Hydrogen is the “Water Electrolytic Separator”. A separator is a metal that plays a crucial role when producing and utilizing hydrogen as a fuel. The separator is a passage for hydrogen and oxygen, and it should be highly conductive and corrosion-resistant. Hence, outstanding technology is required. There are two types of separators: “Fuel Cell Separator,” which is used to utilize hydrogen as fuel, like in fuel cell electric vehicles, and “Water Electrolytic Separator,” which is used to produce hydrogen. 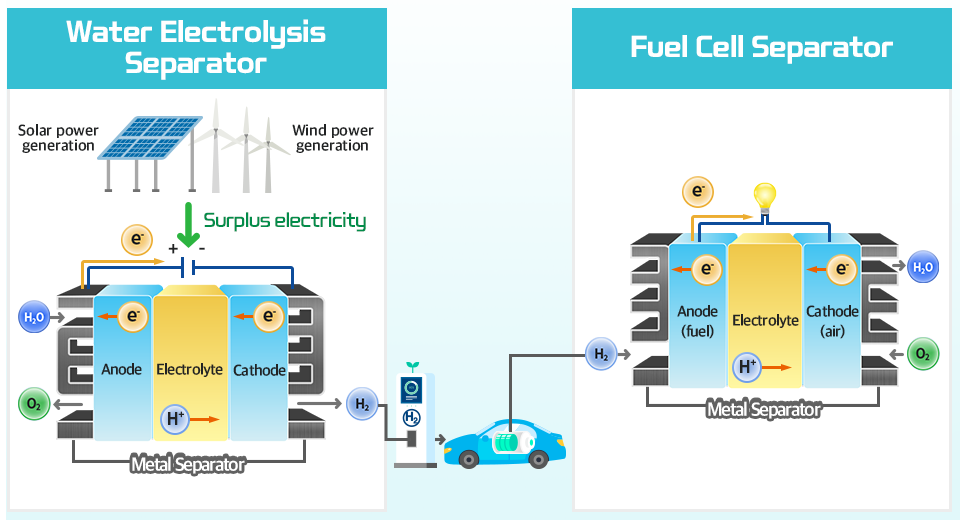 Since the Water Electrolysis Separator is in charge of producing hydrogen from water (2H2O → 2H2 + O2), it operates in a reverse reaction (2H2 + O2 → 2H2O) from the Fuel Cell Separator of a fuel cell electric vehicle or generator. Since the applied environment has higher temperature and humidity and is overall harsher than in the fuel cell, the Water Electrolysis Separator requires better corrosion resistance and conductivity than the Fuel Cell Separator.

The “Fuel Cell Separator” is a separator put on the fuel cell of a vehicle and is equivalent to an engine of conventional engine vehicles. The fuel cell converts hydrogen injected into the car into electric energy. POSCO began developing fuel cell separators in 2006 and succeeded in developing and commercializing the world’s first ultra-high corrosion-resistant stainless steel separator material, Poss470FC, which was applied to the fuel cell electric vehicle Nexo in 2018.

In the past, the separator was coated with gold or carbon material to prevent corrosion, but Poss470FC, which is evaluated as an innovative material, shows better corrosion resistance and conductivity, lowers manufacturing cost, and reduces product size without such coating. Poss470FC was awarded the Gold Prize in the 2018 New Technology Award category by the International Stainless Steel Forum (ISSF) and was selected as one of the “15 Industrial Technology Achievements Leading the Korean Industry” by the National Academy of Engineering in Korea in 2019.

▲ A Fuel Cell Separator made with POSCO stainless steel, Poss470FC, on display at POSCO’s booth at the North American International Auto Show in 2016

On the other hand, unlike the case for fuel cell electric vehicles, which operate under 100°C, the Fuel Cell Separator for power generators operates at 600 to 800 °C for a long period of time. So it requires high oxidation resistance and conductivity accordingly. As of present, stainless steel produced in Germany and Japan adopting pricey rare-earth elements is being applied. Accordingly, POSCO is striving to activate the domestic industry of fuel cells for generators with source materials by developing the low-cost, high-conductive steel, Poss460FC, that can replace expensive import materials.

• [Exploring Hydrogen with POSCO #1] Hydrogen: The Partner of Steel