[Exploring Hydrogen with POSCO #1] Hydrogen: The Partner of Steel

“I believe that one day, water will be employed as fuel. Hydrogen and oxygen, the constituents of water, whether used singly or together, will be energy sources that provide unlimited heat and light. Water will be the coal of the future.” 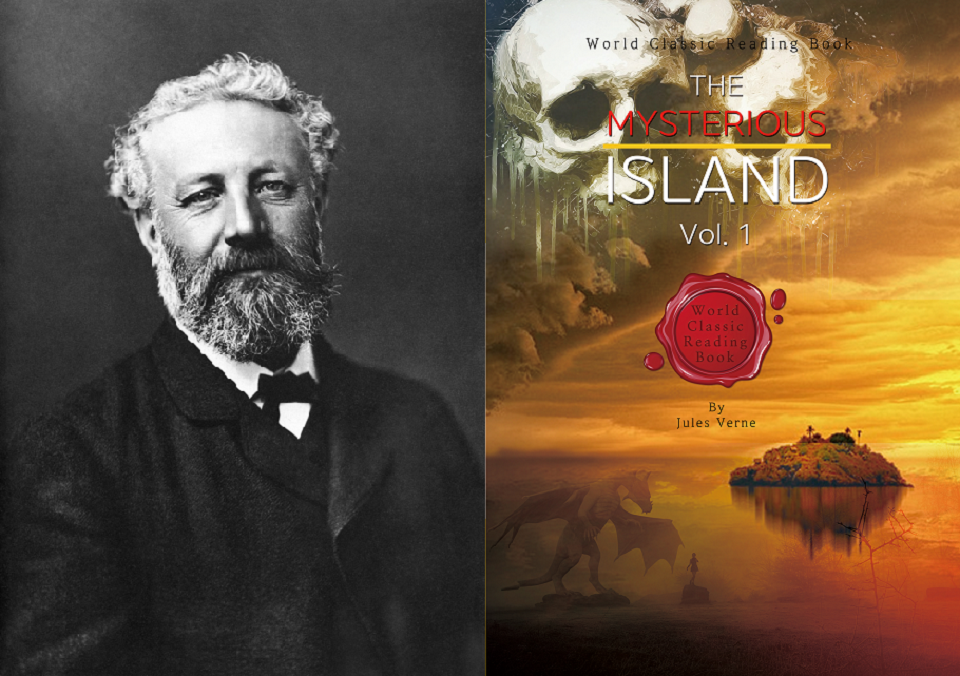 Jules Verne (1828-1905) is a French science-fiction novelist who achieved fame for his books “20,000 Leagues Under the Sea” and “Around the World in 80 Days”. The passage above is from his book, “The Mysterious Island,” published in 1874. The Mysterious Island is where Captain Nemo of “20,000 Leagues Under the Sea” spent the rest of his life after being caught up in the vortex of the Arctic Ocean. “The Mysterious Island” is about how five prisoners captured in the American Civil War steal a hot air balloon and flee to a desert island. Thanks to the main character, who is a master of all things, the escaped survivors live in abundance by making daily necessities such as bombs, wind power plants, and electricity on the uninhabited island. Using water as an energy source must have been what Jules Verne had imagined. However, 150 years later, his imagination is about to become reality. The era of the hydrogen economy is approaching before us.

l Steel, the Partner of Hydrogen (Sensitive to Pressure & Temperature)

Hydrogen is element number 1 on the periodic table and is also the first element to be created in the Big Bang about 14 billion years ago. It is abundant enough to account for 75% of the universe and 90% of the elements. Water (H2O) is a combination of *hydrogen, a word meaning “making water,” and oxygen, and occupies 3/4 of the earth. Since it is possible to decompose and combine hydrogen and oxygen through electrochemical reactions, hydrogen, when used as an energy source, can indeed become a near-infinite energy source, just as Jules Verne imagined.

However, utilizing hydrogen as a raw material is not as easy as it sounds. This is because hydrogen is very sensitive and difficult to handle. In a gaseous state, the pressure of hydrogen is high, and when hydrogen is mixed into the air at a certain percentage, it explodes due to various external stimuli such as heat, flame, or sunlight. Therefore, materials used to transport and store gaseous hydrogen must be pressure-resistant and safe.

If gases are difficult to handle, what about liquids? Hydrogen in liquid form is cold enough to cause frostbite even in brief contact. The boiling point of hydrogen is -252.88°C, so the material used to transport and store liquid hydrogen must withstand -253°C.

A material that can withstand high pressure, reduce the risk of explosion, and endure cryogenic temperatures. The invisible force to develop a hydrogen society lies in the technology to make high-performance hydrogen materials. In the center of all this stands POSCO, the steelmaker that continues to challenge and innovate in new sectors.

To find out about steel for hydrogen application, it is first necessary to understand “hydrogens” produced in various ways. 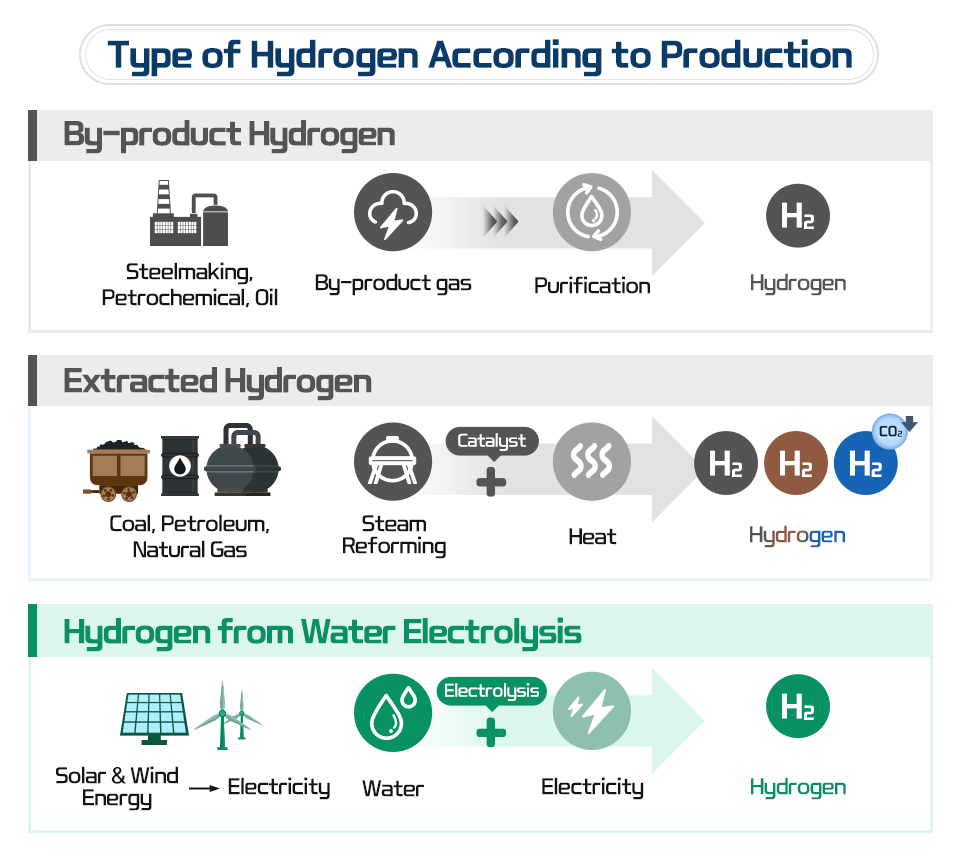 The first is “By-product Hydrogen,” which is made by purifying hydrogen from by-product gases generated on industrial sites, like steelmaking, petrochemical, and oil. The manufacturing cost is lower than half compared to other production methods. However, the purity of the produced hydrogen is not high, so high refining costs are required to produce hydrogen with a purity of 99.999% for hydrogen-electric vehicles. Currently, POSCO possesses an annual hydrogen production capacity of 7,000 tons, utilizing the Cokes Oven Gas generated during the steelmaking process and natural gas (LNG). Among them, around 3,500 tons of by-product hydrogen are extracted and used to control temperature and prevent oxidation while steelmaking.

The second is “Extracted Hydrogen,” which is made with fossil fuels. It accounts for more than 90% of the hydrogen currently produced. In general, the extracted hydrogen is called Grey Hydrogen (H2). The steam reforming method (CH4 + 2H2O → CO2 + 4H2), where hydrogen is extracted with a high-temperature reactor using methane (CH4) — a major component of natural gas — is the most common production method of extracted hydrogen. However, during this process, a large amount of carbon dioxide (CO2) is inevitably generated. It brings about an ironic situation where CO2, a greenhouse gas, should be reduced, but rather increases due to hydrogen production. Therefore, a new technology, which is Carbon Capture & Storage (CCS) technology, is becoming more important. CCS Technology enables the capture, compression, transport, and storage of CO2 underground. Extracted hydrogen can be classified into two. Hydrogen that utilizes coal and lignite is called Brown Hydrogen (H2), and hydrogen applied with CCS technology is called Blue Hydrogen (H2).

To efficiently transport large amounts of CO2 extracted in the process of blue hydrogen production, liquefaction is required, and steel for liquefied CO2 application must be of high-strength, thick, and able to withstand -60°C. Also, the storage tank will have to become larger to increase the efficiency of long-distance transportation. Last year, POSCO has already developed a steel product of 500MPa with a tank capacity of 51,000m3, a steel thickness of 80mmt, and the ability to withstand -60°C, in preparation for the demand for liquefied CO2 steel. 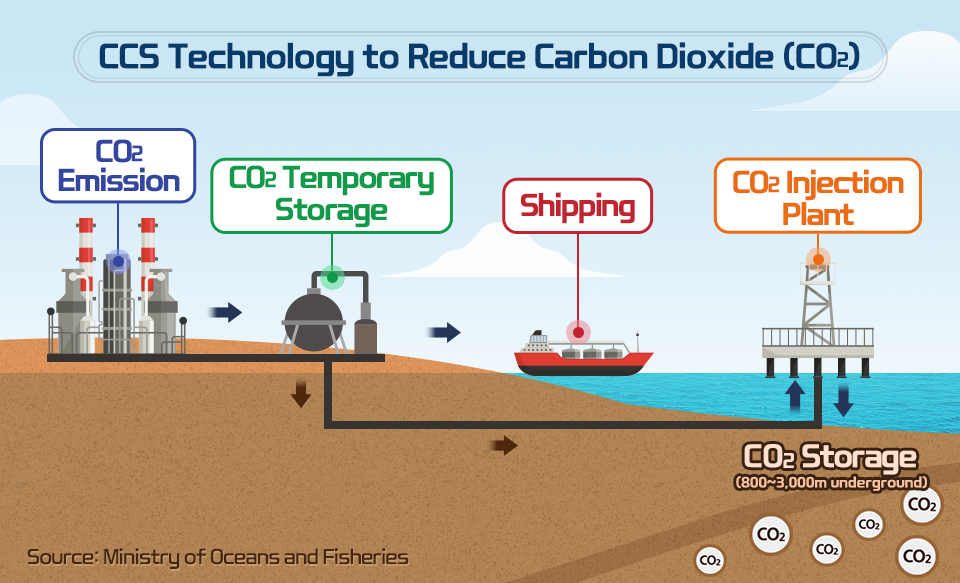 The third is “Hydrogen from Water Electrolysis,” aka Green Hydrogen (H2), which uses water as fuel, just as imagined by Jules Verne. It produces hydrogen by electrolyzing water (2H2O → 2H2 + O2) and does not emit any CO2. However, it cannot be said to be CO2 free entirely, since electricity is required in the first place to electrolyze water. Therefore, when discussing green hydrogen production, the production of renewable energy, like solar and wind power generation, is inevitable.

l Steel for Solar & Wind Power Generation: A Must for Green Hydrogen

POSCO is also actively responding to market demand for steel products applied to solar and wind power generation. In the case of solar power structures, condensate corrosion caused by daily temperature difference influences the life of the structure. POSCO expanded into the market by applying its own PosMAC (POSCO Magnesium Aluminium alloy Coating Product) that has a tensile strength of 540MPa, stronger than conventional materials, and is up to 10 times more corrosion resistant. POSCO is also making continuous efforts to make more durable structures by increasing the strength of the material. As for steel products for wind power generation, POSCO already developed a full range of steel grades as of October 2019. Currently, one out of 10 wind turbines worldwide is made of POSCO steel. Also, POSCO is accelerating its response to the trend of large scale wind power generation and revised standards.

Hydrogen is produced in a variety of ways, from gray hydrogen, brown hydrogen, blue hydrogen, to green hydrogen! In December last year, POSCO supported the Korean government’s 2050 Carbon Neutrality Declaration, and began establishment for its own hydrogen production system. The plan is to boost the production capacity of by-product hydrogen to 70,000 tons by 2025, and produce up to 500,000 tons of Blue Hydrogen by 2030 and 2 million tons of Green Hydrogen by 2040. The ultimate goal is to lead the decarbonization era by completing a hydrogen production capacity of 5 million tons by 2050 and achieving 30 trillion KRW in hydrogen sales.

Did you know that “Green Hydrogen,” the most ideal energy source for the CO2 Zero society, is created through stainless steel? The most important component when producing green hydrogen is the “water electrolysis separator,” and it is this metal called the “separator” that plays a very important role when decomposing water to produce hydrogen and using it as fuel. The separator is a passage for hydrogen and oxygen, and since it must have high electrical conductivity and highly resistant to corrosion, producing a separator requires high-end technology. The key material of this separator is none other than stainless steel!