2021/06/15
An eco-friendly wave has also been sweeping the automotive industry. In preparation for the upcoming green mobility era, POSCO introduced ‘e Autopos,’ an integrated brand of eco-friendly vehicles. And POSCO Newsroom presents to you the story of POSCO’s technology and solutions behind “e Autopos”.

The final round of e Autopos Unboxing is about ‘Hydrogen Fuel Cell’, a finale of the long journey! I feel like I’m an e Autopos expert after passing a journey of e Autopos’ ‘Body & Chassis ⇒ Traction Motor Solution ⇒ Battery Pack Steel’!

This time, we are going to learn about the ‘Hydrogen Fuel Cell’ that continuously produces electricity by reacting hydrogen and oxygen supplied from the outside. So, the final unboxing of e Autopos! Shall we start now? 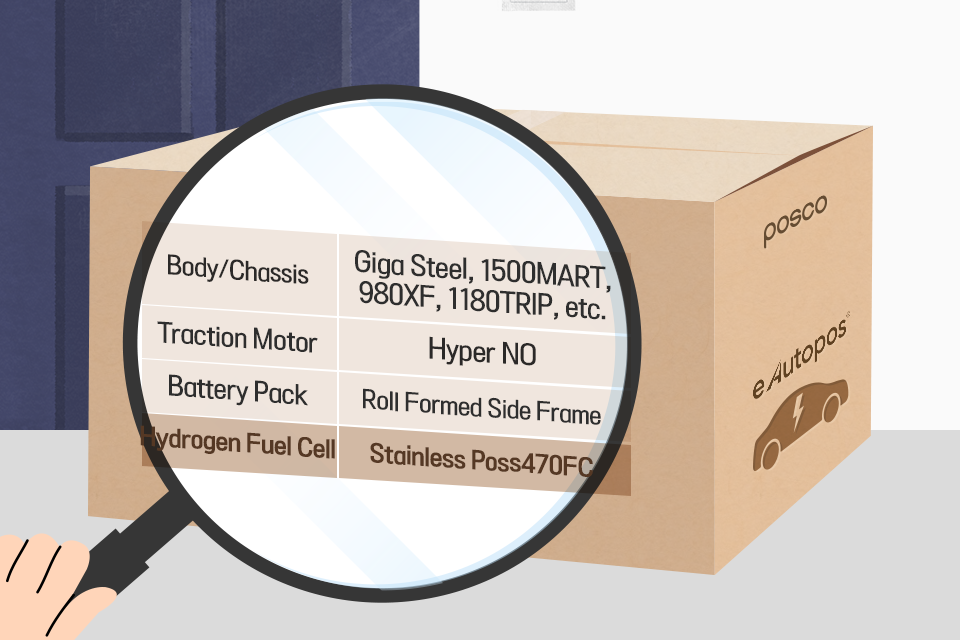 A high-efficiency hydrogen fuel cell that generates electricity and thermal energy through an electrochemical reaction of hydrogen and oxygen in the air. A fuel cell(PEMFC, Proton-exchange membrane fuel cell) applied to hydrogen electric vehicles through an eco-friendly future development system plays the role of an ‘engine’ for internal combustion engine vehicles.

l Poss470FC, the first stainless steel to be used for the non-coated bipolar plate materials! 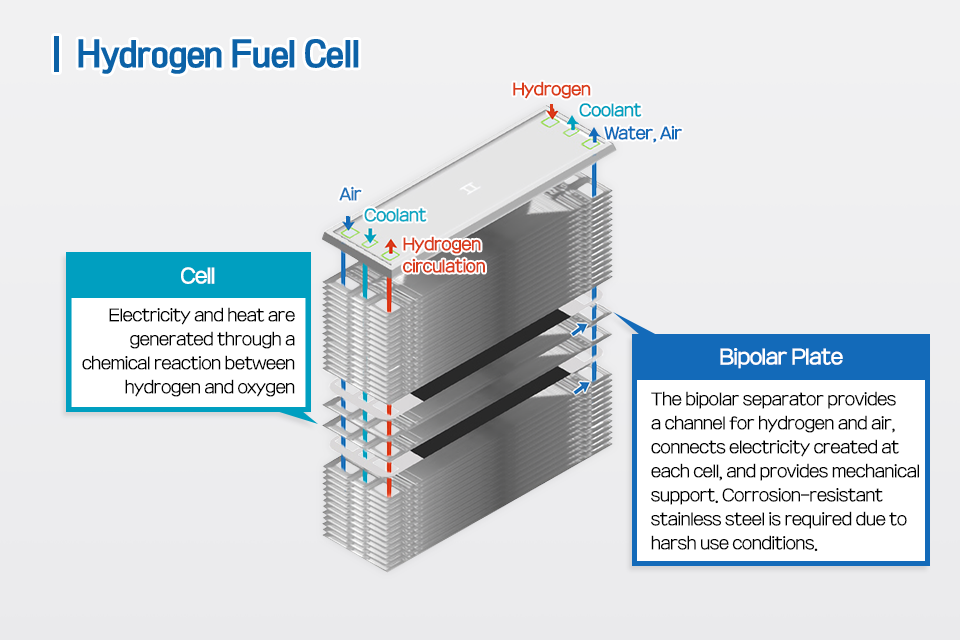 The inside of the hydrogen fuel cell consists of a stack of cells and a bipolar plate. Let’s take a closer look at the Bipolar Plate, which connects the electricity generated by the cell and serves as a support for the machine. A bipolar plate, which provides a channel for hydrogen and air, can be seen to be applied with stainless steel that is resistant to corrosion even in external harsh use environments.

An alloy steel that contains 10.5-12wt% of chromium(Cr) and defies rust. Such an anti-rust capability is thanks to Cr2O3, a 2nm thick passive film, that can block oxygen from penetrating into the substrate. 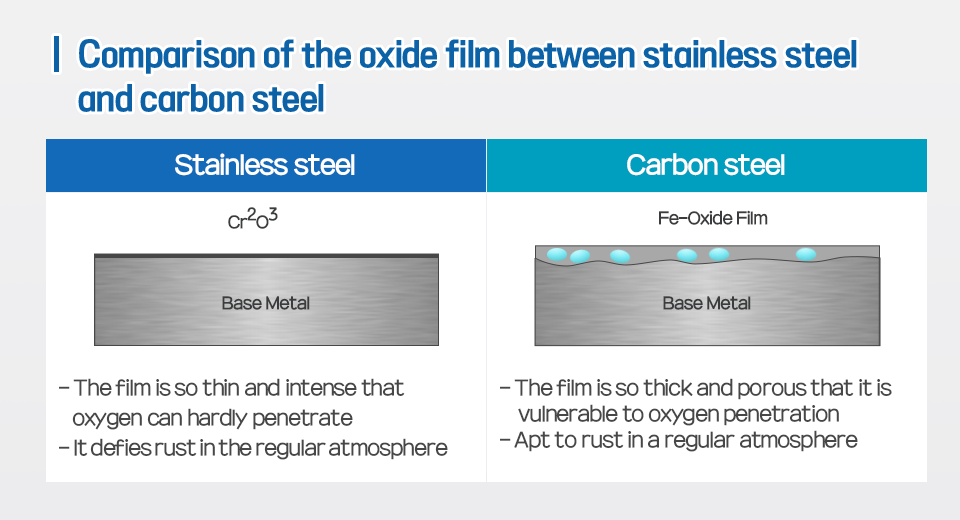 Let’s dig deeper into the Poss470FC, which made a great contribution to the creation of the e Autopos hydrogen fuel cell separator. POSCO began developing fuel cell separators in 2006 and succeeded in developing and commercializing the world’s first ultra-high corrosion-resistant stainless steel separator material, ‘Poss470FC’, which was applied to the fuel cell electric vehicle ‘Nexo’ in 2018.

The biggest key to the success of Poss470FC is the omission of the coating process through POSCO’s unique post-processing technology. At this point, it is necessary to look at the changes in the fuel cell separator material.

In the past, graphite which was expensive and vulnerable to shock was used a lot, but now it is coated to give surface electrical conductivity to a metal material with secured corrosion resistance. However, as precious metals are used a lot as coating materials, the price of the material itself is high, and the processing cost has also increased as an additional coating process is required.

On the other hand, Poss470FC has the strength to omit the coating process by securing surface electrical conductivity with POSCO’s unique post-processing technology. Although it has excellent corrosion resistance and great performance, the cost is only half that of gold-coated 316L and 40% of carbon-coated titanium, which increased price competitiveness.

Poss470FC, which is considered an innovative material while reducing the size of the product, was awarded the Gold Prize in the 2018 New Technology Award category by the International Stainless Steel Forum(ISSF) and was selected as one of the ‘15 Industrial Technology Achievements Leading the Korean Industry’ by the National Academy of Engineering in Korea in 2019.

▲ A Fuel Cell Separator made with POSCO stainless steel, Poss470FC, on display at POSCO’s booth at the North American International Auto Show(NAIAS) in 2016

l Mechanism by which a fuel cell generates an electric current

The mechanism of fuel cell development proceeds in the reverse direction of water electrolysis. That is, when electricity flows through water, hydrogen and oxygen are generated, but the fuel cell generates electricity by reacting hydrogen and oxygen. The polymer membrane of the electrolyte allows only hydrogen ions to pass through, leaving electrons at the cathode inside the membrane. Hydrogen ions combine with oxygen at the cathode to become water, and electric current is generated by the potential difference between the anodes. 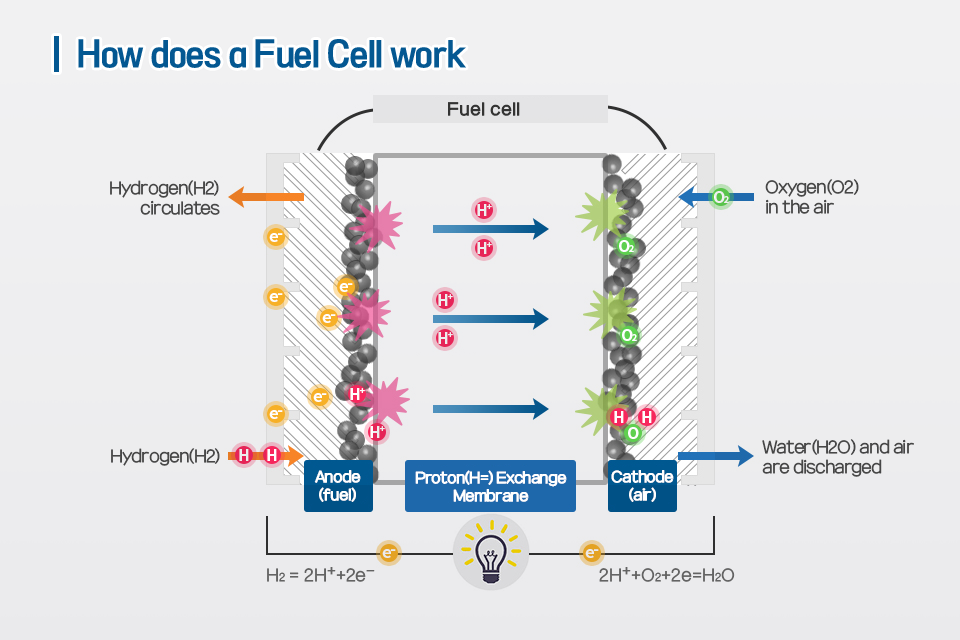 ▲How does a Fuel Cell work

Unfortunately, this is the end of a total of 4 serials including e Autopos hydrogen fuel cells episode! In the meantime, looking through the newsroom, including body/chassis steel plate, energy-efficient steel plate for traction motor, battery pack steel and battery materials, and hydrogen fuel cell separator, I am also confident in the success of ‘e Autopos’! The future of eco-friendly cars is with green mobility market leader ‘e Autopos’ and POSCO.