Close UP! Community With POSCO [episode 6] 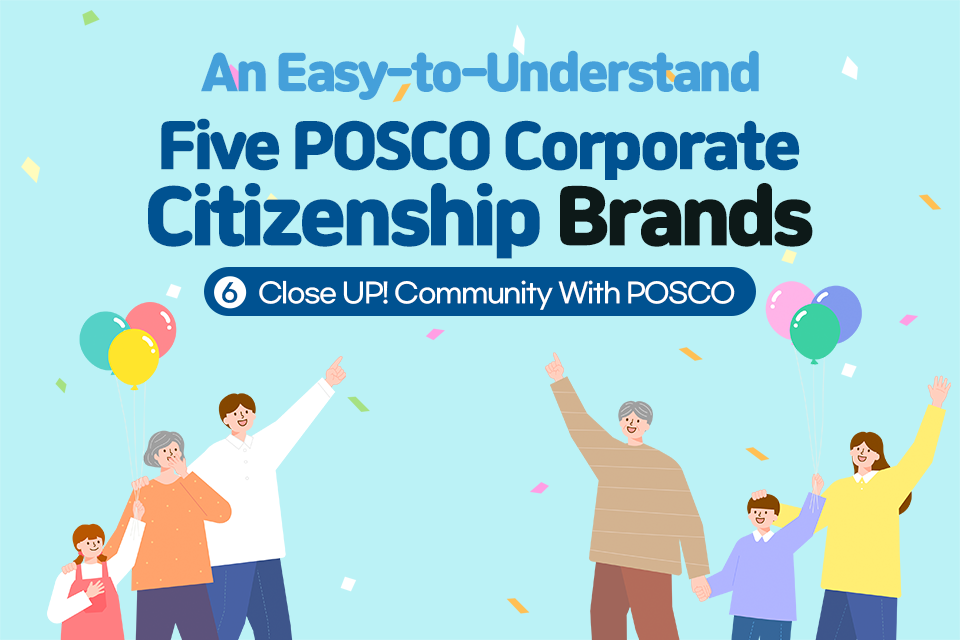 “The Five POSCO Corporate Citizenship Brands” represent the company that POSCO Group is aiming for. Green With POSCO, a signature brand that leads the hydrogen industry and practices ‘2050 Carbon Neutrality’, Together With POSCO, which grows together with small and medium-sized enterprises(SMEs), Challenge With POSCO, which activates venture ecosystem and fosters new growth industry, Life With POSCO, which takes the lead in resolving social problems such as low birth rates and employment and strives for a safe and happy life for employees, and Community With POSCO, which presents a model in which company and society develop together to coexist with the local community.

Let’s solve the curiosity about Community With POSCO, the last of the Five POSCO Corporate Citizenship Brands in this episode!

From the beginning of its foundation, POSCO considered growing with the local community as corporate social responsibility, solving various social problems with residents mainly in Pohang and Gwangyang where POSCO Group’s business sites are located, and Seoul and Incheon, and presenting a model in which companies and society develop together.

POSCO established Korea’s first integrated steelworks in Pohang on April 1, 1968, establishing a relationship with Pohang City. In addition, POSCO has been together with Gwangyang City since November 1981 when Gwangyang was confirmed as the site of the second steelworks, and the employees of both steelworks and partner companies have also been steadily carrying out sharing activities as members of the local community.

Pohang Works, which has been practicing Community With POSCO, is carrying out various win-win cooperative activities in the community. The employees are expressing their hearts through various activities, including sisterhood village sharing activities in which villages and departments set up sisterhood relationships and practice sharing, operation of the soup kitchen, talent donation groups that utilize the talents of employees, and welfare projects in cooperation with local social welfare organizations.

Let’s take a closer look at each of the representative activities of Pohang Works that practice Community With POSCO.

Sharing activities in sisterhood villages(region)
Pohang Works has been affiliated with 122 villages and 6 organizations and has been maintaining ties with 194 villages, including 18 group companies and 48 partner companies.

This year, in particular, many neighbors were suffering from difficulties in the region due to COVID-19, and POSCO first provided tablet PCs and other learning kits to local children’s centers to minimize the educational deviations caused by the increase in online classes so that students can use them in actual classes.

In addition, the soup kitchen, which has been operated as part of community contributions since 2004, has been continuing to provide steady support by delivering meal kits so that people can eat at home in consideration of the difficulty of visiting meals due to COVID-19.

Executive and Employee Talent volunteer activities
POSCO executives and employees’ representative sharing activities are the ‘Talent Volunteer Group’, which combines their talents with volunteer work. In Pohang, there are about 40 talent volunteer groups including the Clean Ocean Volunteer Group, bicycle repair, and foot massage, and about 2,000 volunteers are active. Executives and employees are sharing their talents in various fields and helping their neighbors.

▲ Underwater purifying activities at Yeongilman Port (left) and replacing the wallpaper and the floor mat for senior citizens living alone.

This year, the Pohang Talent Volunteer Group has made special achievements. In the meantime, there have been many difficulties as each volunteer group had to operate a meeting place and storage for volunteer activities individually but the Nanum School, which will serve as a hub center for the talent volunteer group, is about to be completed in September this year.

The reason why Pohang Nanum School is even more special is that it will be built with a modular construction method that has all of the stability, convenience, and economic feasibility. Thanks to this, many volunteers have high expectations as it is expected to be used sooner than the building itself.

▲ A bird’s eye view of Pohang Nanum School, which maximizes aesthetics and efficiency through the application of the modular construction method,

In particular, the 1% Sharing Foundation with the warm hands of its executives and employees is engaged in various local win-win activities and is collaborating with various local cooperative organizations to practice more professional and efficient support.

▲ Sharing side dishes for the underprivileged in the region (left) and sharing desks for children from North Korean refugee families.

▲ Making a table of love during Global Good Citizenship Week (left) and taking pictures of the senior citizens living alone.

Marking its 12th anniversary this year, Global Good Citizenship Week was a great opportunity to deliver a helping hand to neighbors who have become more difficult due to COVID-19, carry out eco-friendly activities to practice carbon neutrality in terms of ESG management, and establish roles and ownership as a member of corporate citizenship. 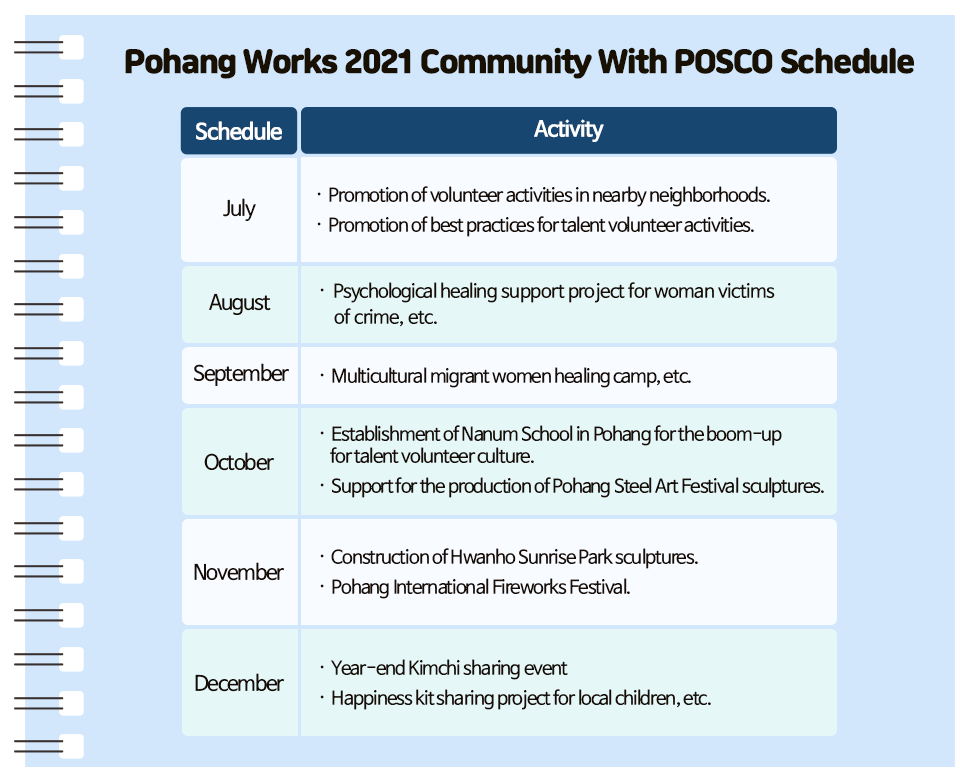 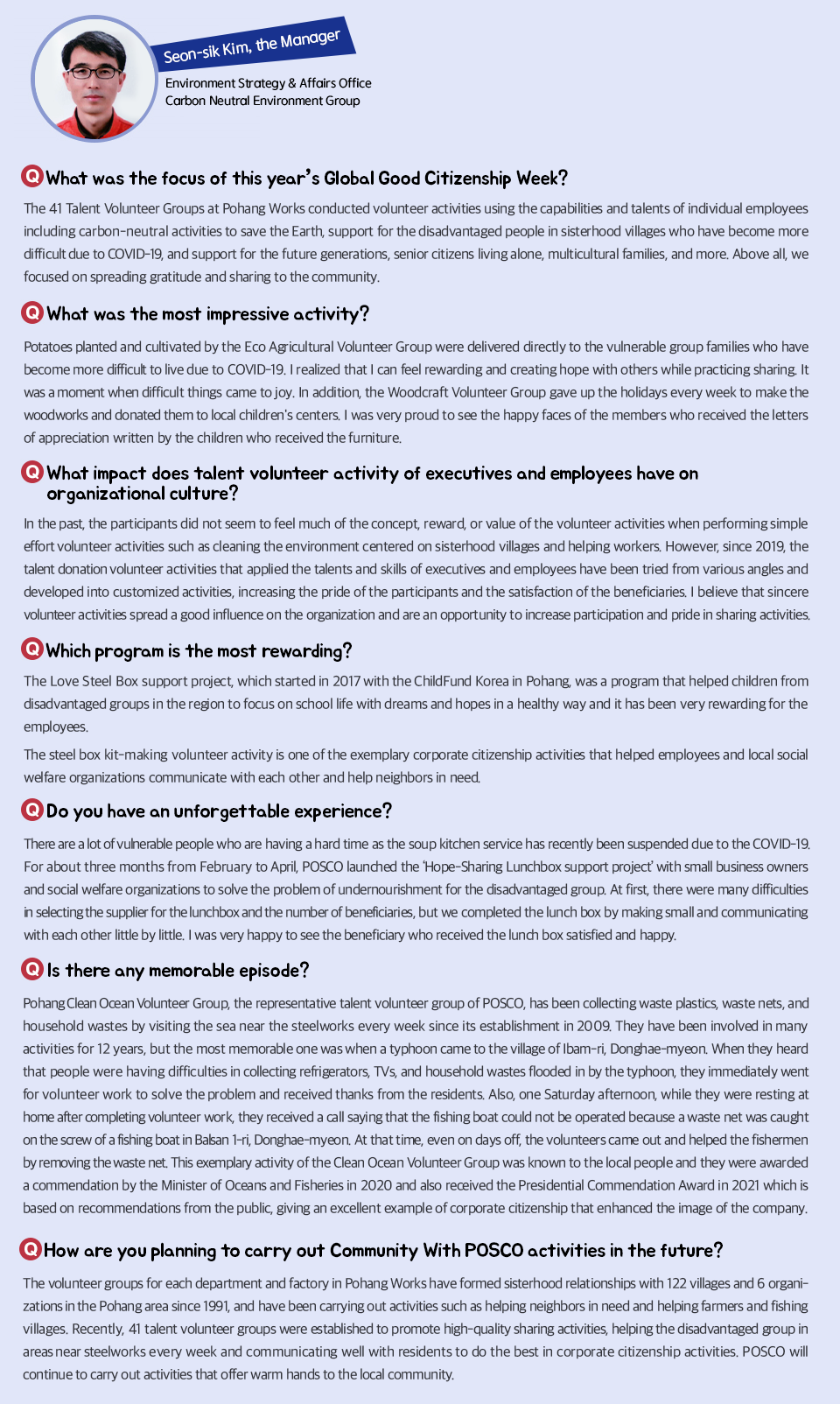 Gwangyang Works, which is practicing Community With POSCO, is carrying out various win-win cooperative activities. The executives and employees practice sharing in a variety of ways, including sister village sharing activities in which villages and departments form sisterhood relationships and practice sharing, talent volunteer group activities of the executives and employees which exceeded more than 40 in 2021, Nanum school that spreads volunteer culture, welfare projects in cooperation with local social welfare organizations, and Gwangyang University Gugak Festival which expands opportunities to enjoy local cultural performances.

Let’s take a closer look at each of the representative activities of Gwangyang Works that practice Community With POSCO.

▲ Helping the harvest of plums, a specialty of Gwangyang (left), and support activities for remodeling the village welfare center in Myodo-dong, Yeosu.

Sisterhood Villages volunteer activity is the oldest and most historic social contribution activity among sharing activities of POSCO. Each department of the steelworks communicates with sisterhood villages in nearby areas to help workers in rural areas or provide various support and help at the request of the village.

Gwangyang Works has been maintaining a deep relationship with 82 villages and a total of 127 villages if including the partner companies and affiliates, and POSCO’s sharing culture is spreading over a wide range of areas, including Gwangyang as well as nearby Yeosu and Hadong.

▲ The leaders of the 2021 new Talent Volunteer Groups held a launching ceremony at Nanum School.

▲ The panoramic view of Nanum School at Gwangyang Works (left) and the beauty volunteer group laboratory inside the Nanum School.

From August 1, 2021, Gwangyang Works will use its in-house blog system to operate ‘Talk Talk’, an online communication space where employees who have completed their volunteer work can share the joy and reward of volunteering. In the future, more than 230 volunteer groups, including department and group volunteer activities, talent volunteer groups, and general volunteer groups, plan to create an encouraging community culture in which they share and encourage each other’s activities.

Community social contribution project
Gwangyang Works is carrying out social contribution projects to help the caring group with various social welfare organizations in the region. The beneficiaries are the future generation, senior citizens, multicultural families, and disabled people, and in particular, some of the projects being promoted are expected to achieve good results by linking job creation for the disabled people and the senior citizens. Gwangyang Works plans to promote 17 projects with local social welfare organizations such as the 1% Sharing Foundation and the Jeonnam Community Chest of Korea this year.

▲ Kimchi making event at the launching ceremony of the lunch box delivery project (left) and signing a business agreement between Gwangyang City and POSCO to promote volunteer work.

Expansion of opportunities to enjoy local cultural performances
Gwangyang Works has sponsored and operated the Korean University Gugak Festival since 2008 to expand opportunities to enjoy local cultural content, securing the popularity of Korean traditional music, and inheriting and developing traditional culture. Following these efforts, the University Gugak Festival has established itself as a representative local festival. 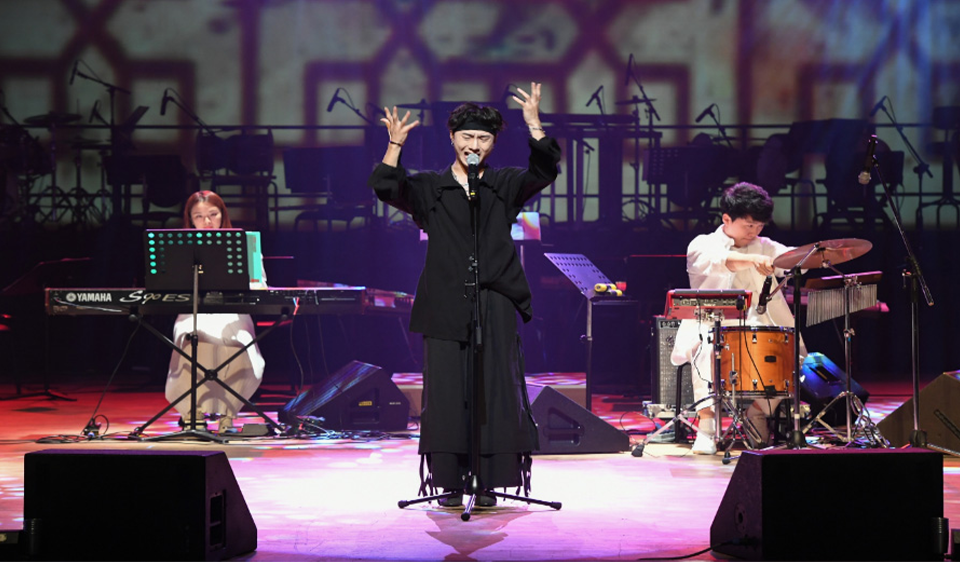 ▲ Performance of the winning team at the 11th University Gugak Festival in 2019.

The University Gugak Festival is the only Korean traditional music contest that discovers and supports young Korean traditional musicians targeting university students and graduate students and since 2014, the Minister prize by the Ministry of Culture, Sports and Tourism has been newly established and operated by raising the level of rewards. Unfortunately, various cultural performances including the University Gugak Festival are not currently held in the aftermath of COVID-19, but it plans to continue as a representative cultural performance in the region.

How was the scenery of Gwangyang Works during this year’s Global Good Citizenship Week? About 7,500 executives and employees of Gwangyang Works and partner companies and 40 talent volunteer groups participated in the volunteer work and this year, they carried out public interest activities focusing on environmental protection in line with the promotion direction. There were local river purification activities and Seomjingang River marine purification activities by throwing EM(microorganism) soil balls performed by labor and management, and the moving-in ceremony of Zero Energy Hope House No. 240. This project plans to remodel a total of 10 households this year, considering environmental aspects such as wall insulation construction, replacement of windows, and old boilers for low-income families. 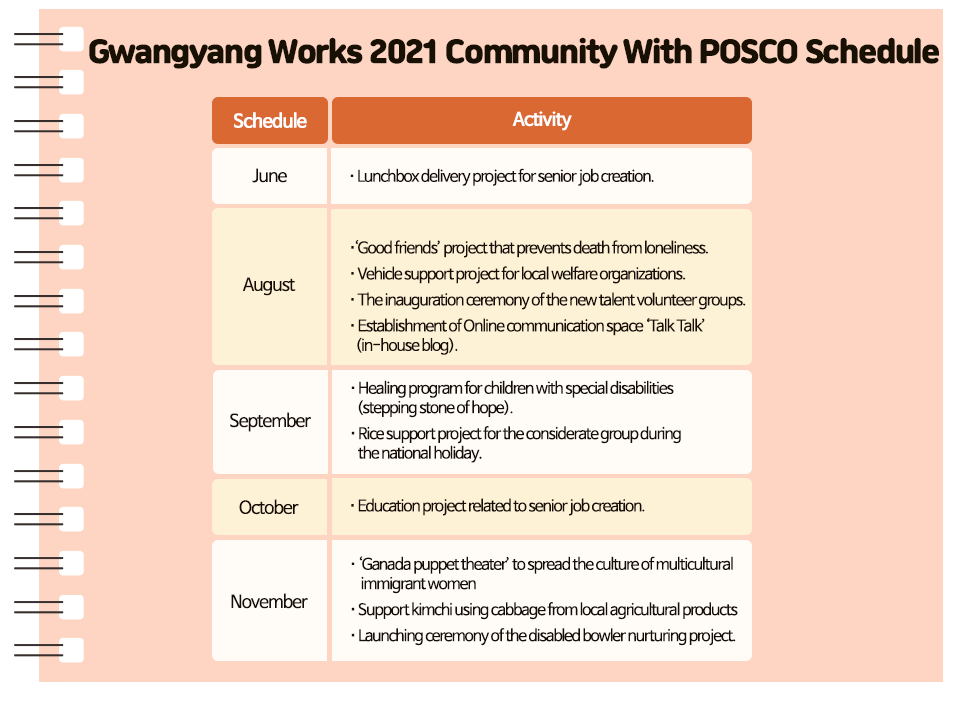 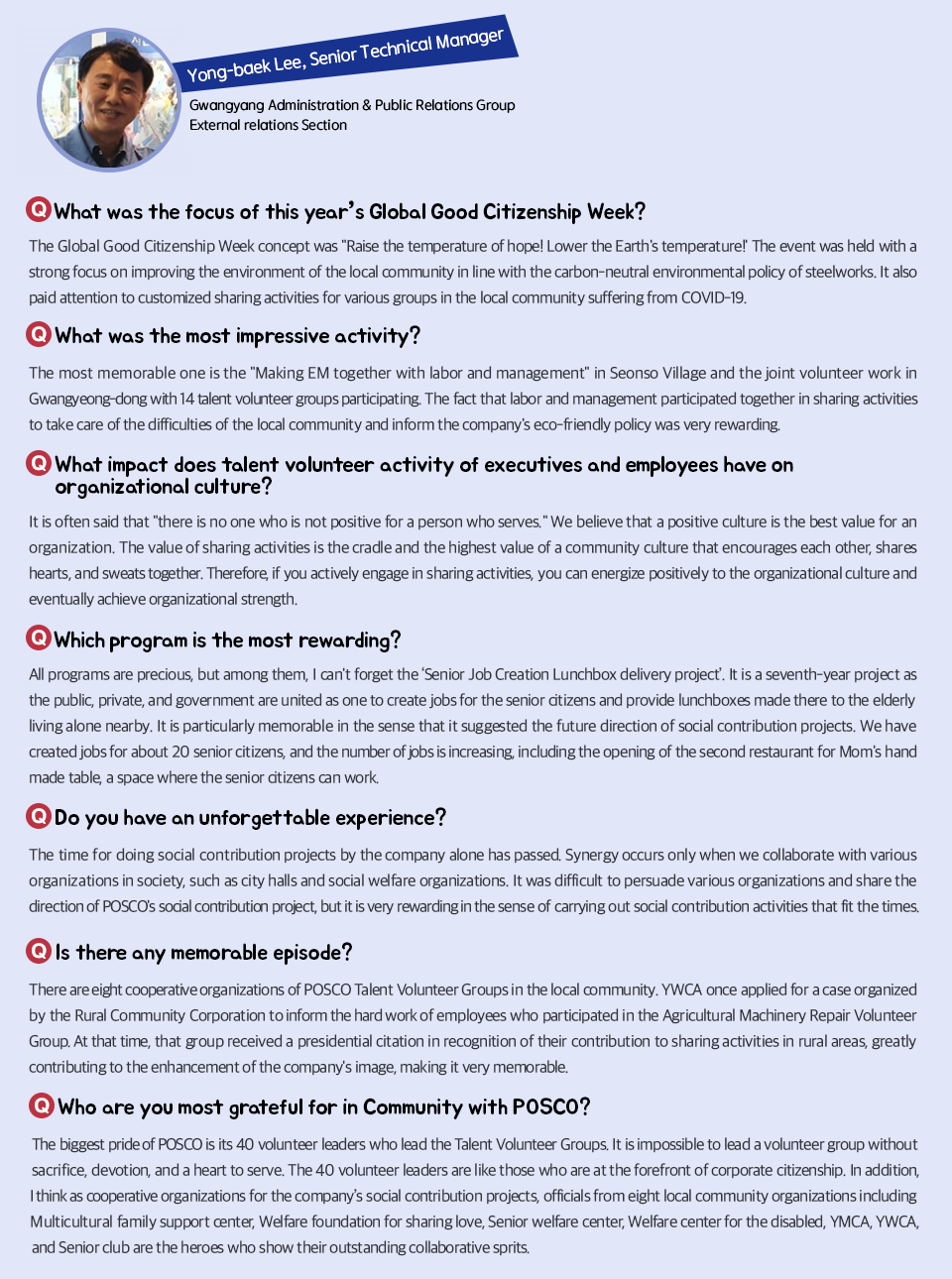 A brand of POSCO Corporate Citizenship, which solves problems in the local community and develops together with local citizens, Community With POSCO! POSCO plans to continue to make the world a better place by practicing sincere sharing activities.