POSCO Masters: 40 Years in the Making

Nam Tae-Gyu has been with POSCO for over 40 years as a systems and maintenance technician. Starting from an early age, Nam had a special knack for fixing broken machinery. One of his earliest memories of accomplishment is reviving his friend’s broken radio and proudly watching his mother sway to its music. That was just the beginning for Nam, and since joining POSCO’s Steel Maintenance Department on January 20, 1978, he has not only fixed essential equipment but also incorporated new technology to existing systems to improve the overall production process of steel. 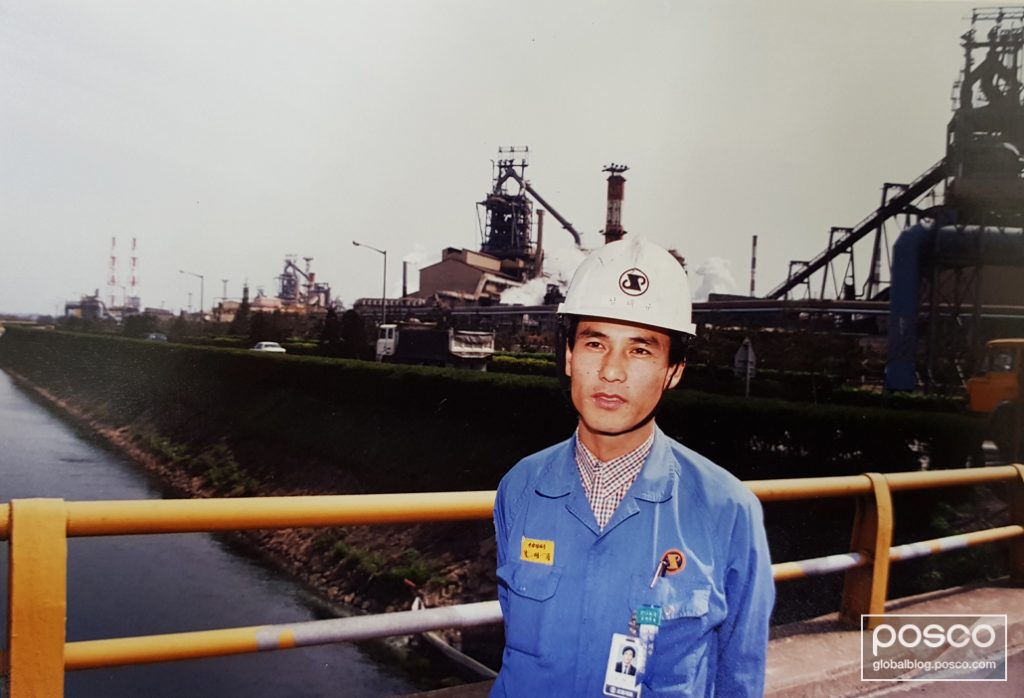 Nam Tae-Gyu in his early days on site at a POSCO steel mill.

Nam’s Battle with the Sublance

Five years into his first job ever, Nam hit his first hurdle. The sublance used for detecting temperature and carbon levels of ingot iron in the converters kept breaking down. The brutal process for replacing the sublance probe took a physical toll on the workers and Nam remembers frequent nosebleeds and extreme fatigue vividly.

Nam explained, “Pure iron is converted into steel in a smelting process that requires 1700 °C of heat and oxygen incorporated into the ingot iron. When the process is 80 percent done, a sublance goes into the ingot iron inside the converter to take temperature and carbon measurements. Then, it sends the data to the operating room. With that data, the operator decides if the process should be continued or stopped. Afterwards, a sublance goes into the post-steelmaking converter again, measures the temperature and the amount of carbon, and then sends that data to the operator one last time. The data is used for the slab and bloom making processes as well. In a way, the sublance acts as an important key that decides the final quality of the steel. So if the sublance doesn’t work properly and sends the wrong data to the operator, there will be a tremendous loss.”

A sublance, which has to be inserted about 1 meter deep into the ingot iron, has a 2-meter probe with a sensor measuring the temperature and carbon and oxygen components. This disposable probe stays in the 1700 °C converter for 5 seconds and transmits the data to the monitor of the operating room through a cable inside the sublance pipe. The problem is that the travel distance of the sublance changes whenever a new probe is equipped. For that reason, facility managers must check the accurate position and adjust the length on every occasion. The sublance had to be adjusted at the top of a 7-story steel mill that is 20 meters higher than the top of the converter. To make it worse, technicians had to physically climb up and down dozens of times for 3 hours to alter the length manually if the lift didn’t work.

Liquid ingot iron in a steel mill during the smelting process

Nam knew there had to be an easier way. After studying the sublance diagram and its instruction manual, he finally had an “aha moment.” He installed a digital location detector in an encoder form that could receive data to determine the travel distance of the sublance from a cambox instead of a touchbar that bred most of the errors in the previous system.

This allowed digital information on the travel distance of the sublance to be sent directly to the operator who in turn could locate the probe accordingly. This alone reduced errors in the data for every probe change. Furthermore, Nam even installed a detection system to eliminate all errors of the previous touch bar.

In the end, the improved sublance allowed 2 people to finish in 10 minutes what 3 people had to work on for 3 hours previously. The measurement success rate increased from 87 to 95 percent and lead to cost reductions and a shorter operation time overall for the smelting process.

Another Hurdle, Another Masterpiece

In 1997, Nam met his second and biggest challenge of his time at POSCO. A converter tilting device that could tilt and rotate a 1300-ton converter broke down. No one expected this machine to malfunction, as it was made with certified parts with advanced technology brought in from Japan. The Japanese supervisors kept the device’s technology a secret for copyright reasons, so the Korean technicians didn’t know the inner workings of the machine.

The complex device was composed of four motors, reducers, inverters and other parts. In order to run the motors, they had to use a magnetic contactor and high-voltage circuit breaker, both imported from Japan and extremely expensive since they had a short lifespan.

“One time, a large amount of electric current spilled on the converter tilting device. A severe arc was generated and melted the magnetic contactor, causing equipment failure and a KRW 200 million loss. I tried to replace the contactor with a domestic model to improve it, but in the process, the electric current flowed to the field motor, and the electric arc leaned causing molten steel to leak. We had to stop all operations for 14 hours and ended up with 15 tons of leaked steel.” Nam recalls.

It was a dark moment for Nam and POSCO, but it only prompted him to work harder towards a solution. After much research, trials and failures, he developed a vacuum magnetic contactor made of domestic parts and applied a vacuum breaker to the tilting device, thus localizing the core parts of the converter tilting device. Also with the new technology, temperatures could be monitored at the bend, cable crossing point and cable access point for a real-time monitoring system for accident prevention. Nam not only raised POSCO’s production quality to global standards, he helped reduce quality deviation and eliminate waste.

Looking over his achievements at POSCO, it is easy to see why Nam was named a 2017 POSCO Master. In the past 40 years, he accomplished 15 patents, 32 outstanding proposals, 1830 general proposals and 156 knowledge records. Nam received the highest award of job competence, the Steel Mill Proposal King award, this year’s Person of Pocheon award, Korea’s Quality Manager award and was named a POSCO Master in 2014. 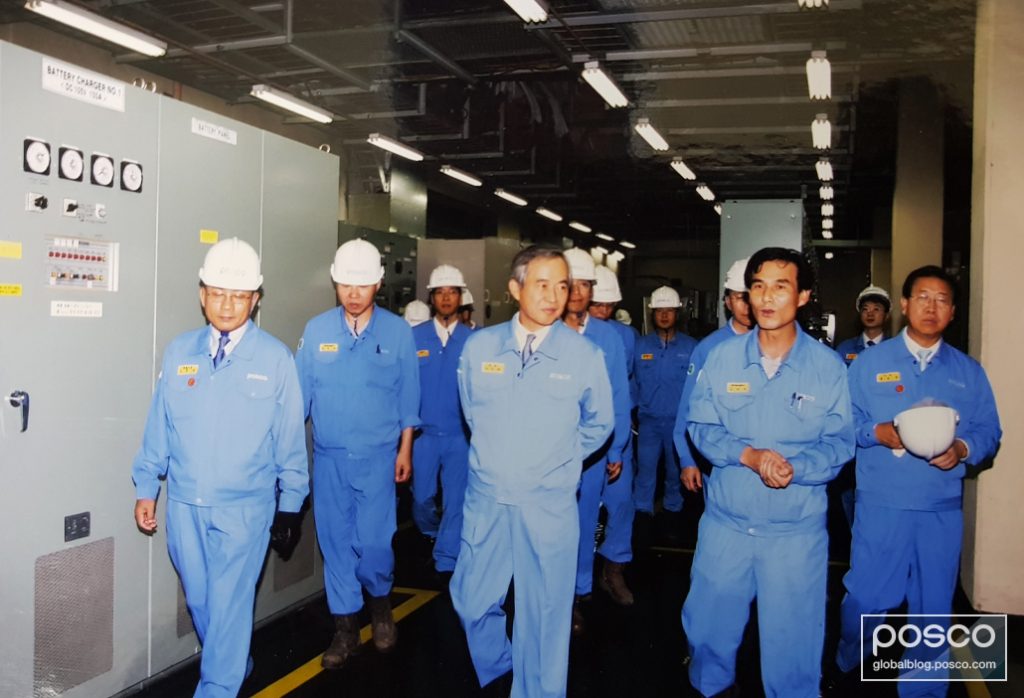 Nam Tae-Gyu walks through the fire prevention system at POSCO’s Steel Mill 1 with executives and employees.

Nam’s working philosophy is simple. Achieving the best results in steelmaking and maintenance requires hard work and passion, much like how a good harvest requires the sweat and blood of the farmer. With this in mind, Nam’s curiosity is unending as he continues to look for improvements and leave behind a legacy of hard work and dedication.