POSCO has successfully provided COVID-19 quarantine supplies to its overseas subsidiaries whose countries heavily suffer from the outbreak of COVID-19. POSCO delivered quarantine supplies, including masks, from South Korea to different parts of the world such as China, India, South-east Asia, Middle-east, Americas and even Africa. This task was to secure workplace health and safety not only for POSCO employees and their family members but also for partners and local contractors. 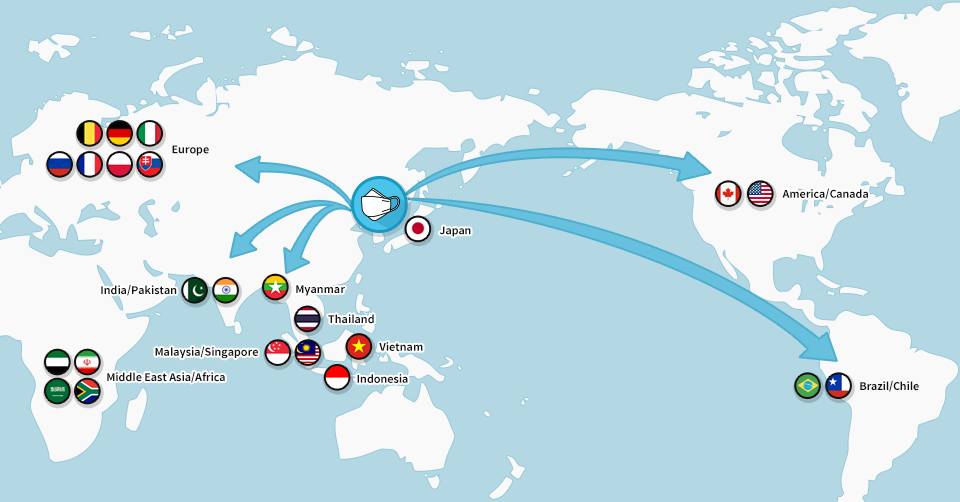 ▲ Click the image and find out more about POSCO overseas affiliates.

However, with closed borders and flights canceled, how could POSCO deliver face masks to its overseas subsidiaries? POSCO Newsroom looked into the details of this seemingly impossible mission.

CASE1. Indonesia
POSCO Group shipped 100,000 USD worth of COVID-19 test kits and relief supplies as well as 900,000 USD worth of face masks to Indonesia where PT.Krakatau POSCO (PT.KP) is located. The supplies helped in quarantine activities carried out by local communities and governments. The employees at PT.KP joined forces and took preventive measures against the COVID-19. As a result, PT.KP was able to continuously operate its plant without closing its facilities at all.

Irfan Afandi, the chairman of the labor union of PT.KP, expressed his thanks to POSCO CEO Jeong-Woo Choi through a letter describing how the face masks from the headquarter were well-distributed to all PT.KP employees and also to partner companies. He on behalf of all employees at PT.KP, also mentioned that all employees were deeply moved because the company supplied masks for their family members as well. 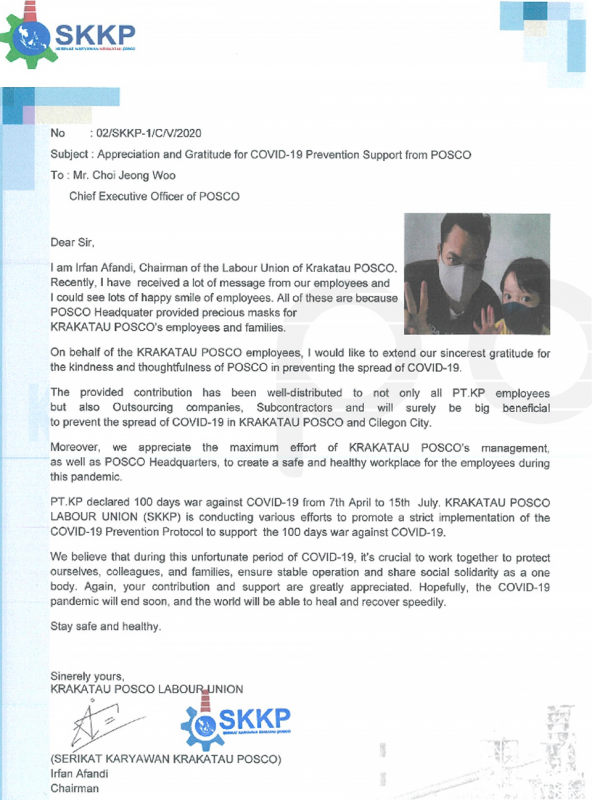 ▲ The letter from Irfan Afandi (the chairman of the labor union of PT.KP)

Other than PT.KP, there are a total of nine POSCO Group companies expanding their businesses in Indonesia, including POSCO International’s PT. Bio Inti Agrindo (Palm oil farm) and PT.POSCO-Indonesia Inti (PT.PII), a Jakarta-based trading company.

The first death from COVID-19 in Brazil occurred in March. At that time, POSCO headquarters in Korea had already decided to provide face masks to all employees working at local business entities, business partners, and contractors, as well as all of their family members, and was striving to secure the supplies.

CASE2. Brazil
Must reach faster than the virus!
The first death from COVID-19 in Brazil occurred in March. At that time, POSCO headquarters in Korea had already decided to provide face masks to all employees and families, including group companies, partners, and joint ventures, as well as overseas subsidiaries, and was focusing on securing the supplies.

It was a race against time. With COVID-19 spreading rapidly since the beginning of April, acquiring new face masks was a difficult task, and employees in Brazil were using disposable masks for a week. While POSCO and POSCO ICT run offices in Rio de Janeiro and Sao Paulo respectively, many employees from POSCO, POSCO E&C, and POSCO ICT are working at CSP(Companhia Siderúrgica do Pecém), a joint steel company in Brazil. POSCO secured more than 10,000 face masks for all employees and their family members including those from Dongkuk Steel, a business partner in CSP, and shipped them via air on April 14.

The masks arrived at Miami Airport, U.S. on April 15, but faced another challenge. All flights to Brazil had been canceled. POSCO decided to deliver them by land transport — traveling 14.887 km from Miami to Fortaleza, Brazil.

Transporting 14,887 km: from Miami to Fortaleza
To safely transport the mask, POSCO quickly contacted the most reliable company in the region. The specially packed face masks traveled through Miami, Panama, and Colombia, and reached its final destination, Fortaleza. After going through three days of the complicated customs clearance process, they were finally handed over to CSP on April 25. Three days after the arrival of the masks, the number of deaths in Brazil reached 5,000 and exceeded 10,000 on May 9. As of June 2, the toll stands at 30,000.

A CSP employee, who received the mask, expressed his gratitude on PBN, POSCO’s internal broadcasting station. “We appreciate all the efforts POSCO has put into providing the face masks — not just for the employees but also for the whole family.”, he said.

CASE3. India
New confirmed case occurs at airport customs, delivery delayed for 15 days.
In India, strong preventive measures were being taken due to the spread of COVID-19, including the closure of the country. In fact economic activity was paralyzed across the country. The number of airline flights decreased dramatically, including road closures, making it difficult to secure flights. POSCO managed to secure a flight but faced another challenge — customs. The multi-use face masks needed a guarantee from the local government, stating that they were relief goods. POSCO resolved the issue by closely cooperating with the customs and local government. Just when all seemed to go fine, a new COVID-19 confirmed case occurred in the airport customs. The entire airport was shut down, and the face masks were retained there for 15 days. After overcoming these series of challenges, the airport was reopened, and delivery resumed. The face masks arrived safely to the Indian subsidiary on May 8.

CASE4. Europe
Drilling through closed borders, into Europe.
The virus is on a rapid spread in Europe, especially in Italy and Spain. In the case of Italy, all borders of the country were closed, and all businesses faced temporary closure, except for essential industries. In this situation, POSCO-ITPC, a local processing center, urgently requested face masks. Although all borders were closed, fortunately, cargo planes from Korea were operated once a week. After several requests, POSCO succeeded in shipping the goods to Italy.

“Getting certification is nearly impossible if there’s no record of export to Europe.”
For other European countries, getting certification required for customs clearance was a major issue. The face masks were already exported to the U.S. and Hong Kong, but it had no record of exports to Europe, making it difficult to get a certification. It seemed that the procedure would take several months, However, acknowledging the urgent matter, the local customs finally accepted POSCO’s request in the end. At last, the face masks were delivered to various parts of Europe, including Germany, Belgium, France, Poland, and Slovakia.

What kind of face masks were delivered to POSCO Overseas employees? 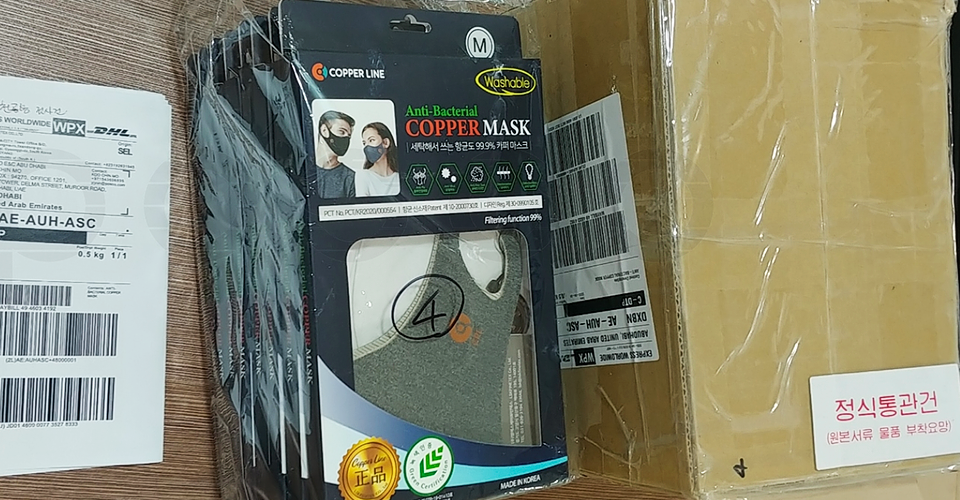 ▲ Multi-use face masks that were shipped to the POSCO E&C office in Abu Dhabi, UAE

Under the pharmaceutical law, face masks are designated as non-medical products and thus approved by the Ministry of Food and Drug Safety (MFDS). There are two types of face masks: a surgical mask is one and respirators (anti-dust masks) the other. The MFDS restricted exports of two types of masks that have a KF certification (respirators), so POSCO secured multi-use masks that are as efficient as KF94 masks and distributed them to all employees both in Korea and abroad. The multi-use masks made with new copper materials have an antibacterial effect. They can be reused up to three months, and are able to retain its effectiveness.

CASE5. America
The confirmed case of a dispatched employee & the rapid spread of COVID-19
In March, POSCO-America, POSCO’s business office in the U.S., requested for multi-use masks. It reported that a dispatched employee working at POSCO-AAPC, a local processing center, was confirmed of the virus, and two more employees at POSCO-America and POSCO-Mexico were being tested. There was a great deal of difficulty in securing a flight to the United States, but POSCO accomplished the task once again. On March 29, the masks were sent on a night flight and arrived at Atlanta airport the next day. After going through customs clearance, the masks were distributed to Atlanta, Washington, Houston, Detroit, and Mexico City.