“There’s no substitute for experience,” says Sungnam Kim, an electrical engineer who works at the Gwangyang Steelworks. Kim should know: his 38 years of experience have made him one of the top electrical equipment maintenance experts at POSCO.

Having been certified in such fields as electrical engineering, firefighting equipment and engineering, Master Kim’s expertise is both broad and deep. That experience and technical know-how, along with his tireless dedication to mentoring the other members of the electrical maintenance team, were what led to Kim being named one of this year’s three new POSCO Masters of Korea.

The title POSCO Master of Korea is reserved for the best of the best field technicians, those with not only incredible skills, but who also lead their co-workers by example and help contribute to the competitiveness of the company.

Let’s take a look at Master Sungnam Kim, and how four decades of dedication have made him a legend on the electrical maintenance team.

Dreaming of POSCO While Still in School

Sungnam Kim had grown fascinated with POSCO, even before he finished high school. Having grown up in a 12-person family in a small home, he was always a tinkerer, often taking apart radios or other electronic devices. With such a large family, he had to go to a vocational high school, where he first learned about electronics and machinery, and thanks to his inquisitive nature he excelled in his studies.

Back in the 1970s in Korea, there was a popular TV series titled Blooming Corners of Korea, which featured the wife of a POSCO employee who played a significant character. The drama even had scenes that were filmed in front of POSCO’s main gate. Because of that, Kim says he grew more aware of POSCO and began thinking about one day working there. More importantly, with his interest in electricity and machines, he thought the company made a great fit.

His dreams soon came true. On January 20, 1978, he started work at POSCO, just two days after graduating high school. At first he found the transition very difficult. Even though he had studied mechanical and electrical subjects in high school, the real-world field conditions at POSCO were very challenging.

POSCO was a very different company back then, just starting its dramatic growth into one of the world’s leading steel companies, and working conditions could be difficult. However, Kim was fortunate to work under Huicheol Choi, the manager of equipment repairs and a legendary mentor from that period. Choi would teach workers mathematics in the mornings, as well as electrical engineering and practical subjects.

“I remember that first day, he took out his electrical engineering book, and in his thick southern accent he said ‘I still study every day. I want you to study every day’,” Kim recalls. He says he took that advice to heart and vowed to always keep learning.

Sometimes learning came from terrible circumstances. In December 1980, POSCO suffered an infamous accident in one of its old ironworks. There was a major fire, but Kim discovered that his team was unprepared to deal with it properly. It took around-the-clock work for 20 days before the ironworks was able to restart.

“When the sooty, silent plant finally restarted, the noise of the equipment resuming operations was genuinely touching,” he says. “The sound of working equipment for a repair technician is the most pleasing sound there is.”

Following that accident, he grew obsessed with gaining field experience and real-world know-how. “I followed my seniors everywhere, learning all I could. Electrical fires, transformer damage, main motor breakdowns—I wanted to know everything,” he says. “I wanted experience solving all types of problems, big and small.”

Since then, safety has been a major concern for Master Kim, in particular preventative maintenance. Fixing broken equipment is important, but it is even more vital to ensure everything is working properly to avoid accidents and dangerous situations from beginning.

“I feel that POSCO’s maintenance and restoration processes are the best in the world,” Kim says. “Technicians should always feel a duty to give 100 percent, to ensure everything is well maintained.”

Awarded ‘Master’ in Recognition of a Lifetime of Service

Kim’s lifetime of dedication to safety and maintenance of electrical equipment at POSCO led to his being honored at a POSCO Master of Korea. In addition to his many technical certifications, Master Kim has also been awarded for seven outstanding proposals and three registered patents over the years, along with honors by the president and head of ironworks. In fact, his co-workers like to say, “Sungnam Kim exists wherever there is equipment.” 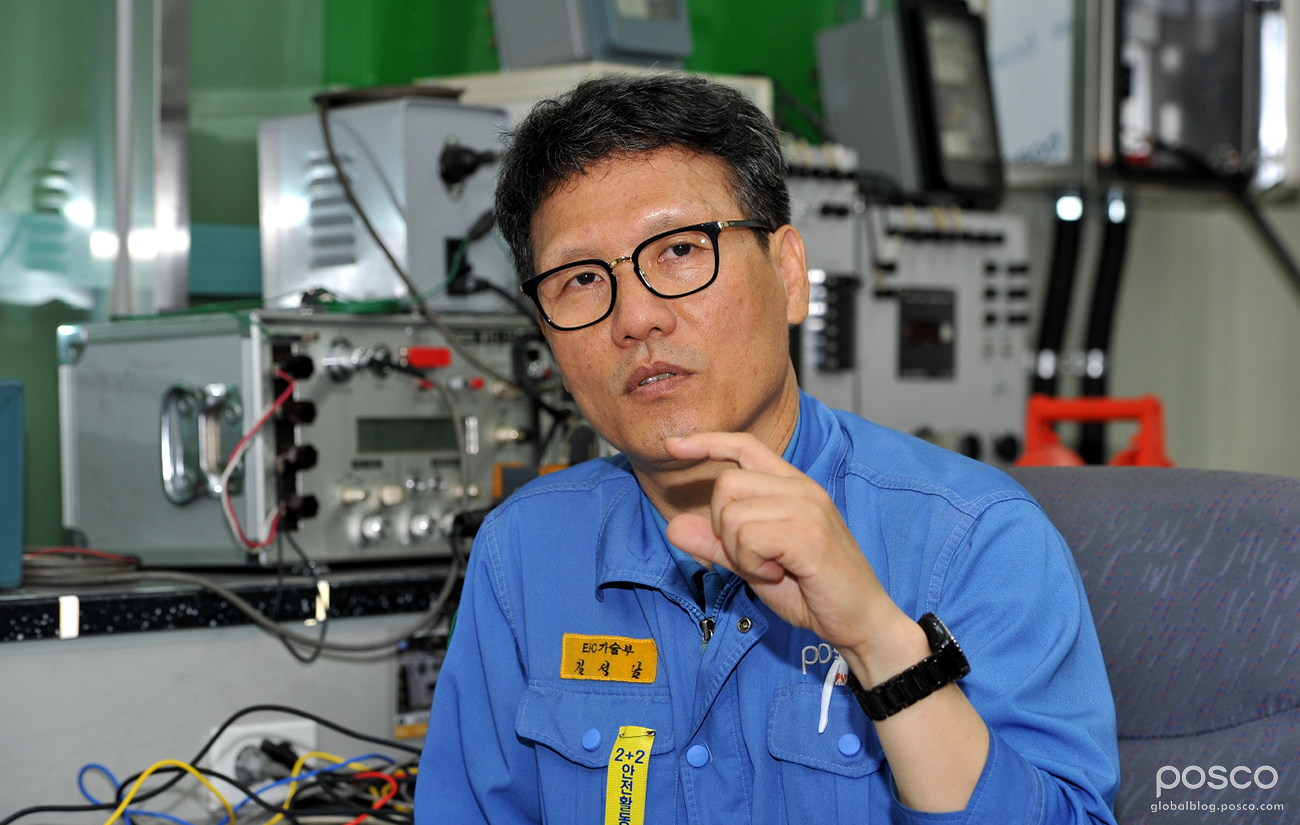 Throughout his interview, two words repeatedly came up: curiosity and passion. Even while a child, those were the traits that most defined him. And those are the traits that underlie the best of the best field technicians. Approaching his work with that vibrant spirit helps Master Kim stay young at heart.

Furthermore, for Master Kim, building knowledge isn’t just about learning. It is also about passing along that knowledge. “There’s a divide between the knowledge of someone with 20 years’ experience and someone with just one or two years. And advances in technology are not enough to bridge that divide.”

In the end, the goal is about more than just techniques and equipment. It’s about really knowing the entire operations, as thoroughly as a doctor understands the human body. “A technician should be a doctor for the equipment, listening carefully and regularly checking its status,” he says. “I want the next generation of engineers at POSCO to think past the details and look at the big picture, so they can all be true masters.”

After 38 years in electrical equipment maintenance, Sungnam Kim knows the big picture like few others. As a POSCO Master of Korea, we look forward to learning from him how to see that bigger picture, too.