49 Years of Innovation: POSCO’s Path towards Leading an Industry

When POSCO was founded in April 1960, Korea had very little heavy industry production facilities and no existing steel industry. Despite these obvious setbacks POSCO has grown to become the fourth largest steelmaker in the world while also holding the distinction as being the most competitive. Innovations in research and steel production processes have pushed POSCO to the technological forefront of the steel industry, and its advanced steel products remain some of the lightest and strongest steel in the world.

It all started 49 years ago in a small fishing village on the East coast of Korea and has grown to be the fourth-largest steel producer in the world.

A Small Fishing Village with 39 Employees

To help rebuild the country after the end of the Korean War, President Park Chung-hee made steel production and heavy industry the centerpiece of his Second Five Year Plan (1967-1971). Despite there being no steel industry in Korea, President Park wanted to be able to manufacture steel domestically without relying on imports and foreign technology.

Opening of POSCO in April 1968

In 1965, President Park visited Pittsburgh, PA, where he gained insight into the steel industry and what would be required if Korea were to develop its own independent production facilities. One year later, Korea International Steel Associates (KISA) was formed. KISA included a consortium of eight companies from five different countries whose goal was to help Korea start its own integrated steelmaking facility. By 1967, the government approved a plan from KISA that included a basic agreement on technology & funding.

Pohang, a small fishing village on Korea’s eastern coast, was chosen as the official site of the steel mill. POSCO was officially incorporated on April 1, 1968, as a joint public-private venture with just 39 employees. Park Tae-joon came on board to serve as CEO and by May 1968, construction of POSCO’s headquarters had begun. 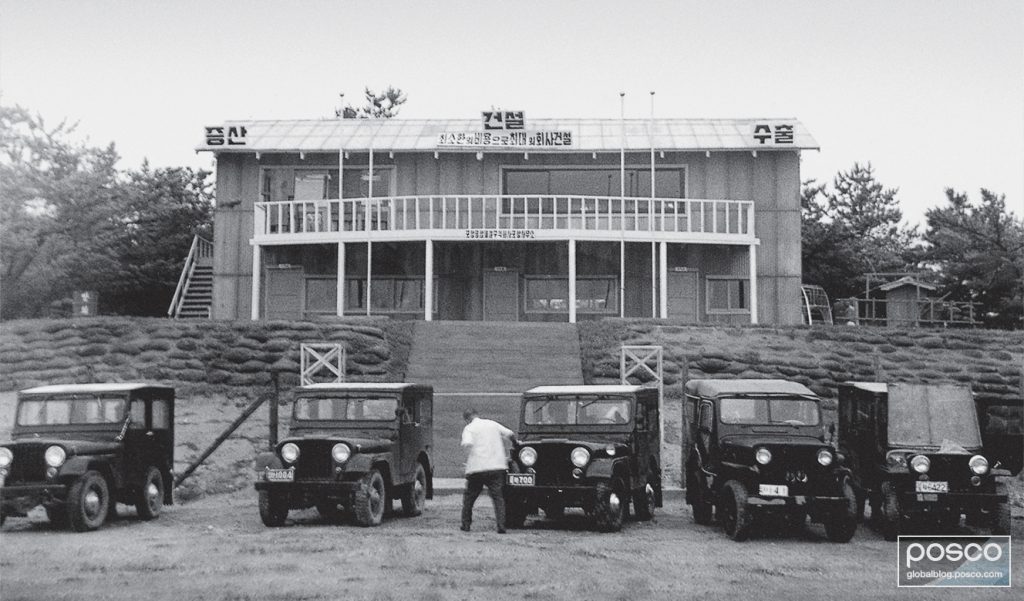 In May 1968 the POSCO headquarters construction had begun

Despite the steps taken to move Korea’s steel industry forward, there were many setbacks along the way. First, overshadowing each step of its development was the skepticism coming from both foreign and domestic fronts. Foreign investors could not understand why Korea would expand into industries it had no history with. And local leaders doubted their ability to overcome all of the technological, economic, and infrastructural hurdles facing them. To make matters worse, KISA was disbanded in September 1969 – leaving plans for POSCO up in the air.

Korean President Park Chung-hee was instrumental in getting POSCO off of the ground. Here he is at one of the blast furnaces at Pohang Works. (1976)

Determined to complete the project, President Park began negotiations with Japan who later provided the grants, loans, and technology for the construction of the initial plant. Construction of the steel mill started in 1970 and on June 9, 1973, at 7:30 am, the first steel came off of the line. By April 1974, they had decided to expand the capacity of the third furnace at Pohang Words to 5.5 million tons and the fourth furnace capacity was increased to 8.5 million tons.

Because of POSCO’s early successes, the Korean government decided to build a second facility on the peninsula’s southern coast in Gwangyang. After the completion of the fourth phase of construction at Gwangyang, POSCO had a total of 20.8 million tons of crude steel production capacity. Of that total, Pohang was producing 9.4 million tons with Gwangyang producing 11.4 million tons. It earned the distinction of being the world’s largest steel mill and POSCO become one of the main driving forces behind the industrialization of Korea’s economy.

After its completion, Gwangyang Works was the largest integrated steel mill in the world. (1992)

In 1986, POSCO entered into a 50/50 joint venture with US Steel (UPI). Their partnership was set to develop a comprehensive modernization program that would upgrade the processes and equipment of the facility. Since the establishment of USS-POSCO Industries (UPI), POSCO has continued to branch out all over the globe. It has set up STS production plants at Zhangjiagang Pohang Stainless Steel (China) and POSCO Tai Knox (Thailand), and automotive steel plate production lines (CGL) in Mexico, India, and China. PT Krakatau POSCO was built in 2013 and was the first integrated steel mill in Southeast Asia.

POSCO Becomes the Most Competitive Steelmaker in the World

With a focus on advanced steel solutions, POSCO has developed a wide range of products that can be customized to fit a customer’s unique needs. These World Premium Products are the reason POSCO has been listed as the most competitive steelmaker for seven years in a row. For example, PosMAC has been utilized in many different ways from floating solar cells to durable public art pieces. Also, POSCO’s award winning PosCozy floor plates provide soundproofing and heat insulation.

The hot rolling process at Gwangyang produces 3,400,000 tons per year

POSCO has also strengthened its global competitiveness by accelerating new businesses in the materials and energy industries. POSCO has developed a fuel cell plant that was completed in 2008, a Myanmar gas field that produces 500 million cubic feet of gas each day, and lithium extraction technology that is 10 times faster than previous methods.

In addition to manufacturing advanced, high-quality steel, POSCO’s Solution Marketing provides customers with added technology solutions and commercial support. Instead of just supplying products and stepping away from the customer, POSCO works with its customers to create customized solutions that ensure successful implementation. Partnering with manufacturers early on in the production process, POSCO has stepped beyond its role as a steel supplier and now serves as a solutions provider.

POSCO also incorporates cutting edge technology and innovations into its production processes. At its automotive steel plate factory in Gwangyang, POSCO introduced AI technology into its coating weight control system, improving quality and reducing waste. Also, POSCO CEO Ohjoon Kwon remains committed to developing more smart factory solutions and has been meeting with executives of other companies, such as GE and Siemens, to explore partnerships and best practices.

Someone seeing the successes of POSCO today might have a hard time understanding how it even started, much less how it was able to overcome the immense barriers it faced. POSCO continues to be a leader in the steel industry with its advanced, high-quality World Premium Products. Also, POSCO’s successes in its non-steel ventures show its commitment to remaining on the cutting edge of technological trends and industrial innovation. Watch the video below to see for yourself.