Steel has long been the go-to construction material for the world’s most iconic structures, thanks to its versatility, efficiency and sustainability properties. But, when it comes to the construction industry, inefficiencies are fairly common, and are often related to high costs for equipment and labor, or long planning cycles which subsequently slow industry activity.

One new technology, however, has the potential to ease some of these pain points and is gaining more and more traction with each passing day.

3D printing is an additive process that uses computers and other machines to synthesize a three-dimensional object layer-by-layer. It is most often associated with the art and design industries, and more recently the medical field. But it is also transforming other areas, like building and construction, and subsequently the steel industry, on a much bigger scale.

The whole may be greater than the sum of its parts, but in the building industry, even the tiniest pieces are vitally important.

The method will allow the company to produce sophisticated structural pieces more efficiently, and is expected to significantly cut waste and costs. Arup’s redesign of a highly complex steel node can be utilized in lightweight structures, and its complex geometry demonstrates the unlimited possibilities of 3D printing.

But it’s not just small parts that are being created using 3D printing. In fact, the technology is being utilized to build a steel pedestrian bridge—a clear sign that the technology has entered the world of large-scale functional objects and sustainable materials.

Specially-designed robotic arms heat the metal to a scorching 1,500 degrees Celsius to weld the structure, all the while using a computer program to plot the sophisticated design. The systems are able to weld metal or print resin in mid-air, without size constraints.

And, since the robot arms use the very structure they print as support, the technique removes the need for scaffolding or additional supports, thus making the construction process safer.

The MX3D bridge, which will be the first 3D-printed bridge in the world, is expected to be completed by mid-2017 and will be placed across one of Amsterdam’s iconic canals.

The Home of the Future

3D printing has also been used to create entire multistory structures, like the world’s first 3D-printed apartment building in China.

To accomplish such a feat, Shanghai-based WinSun used a CAD (computer-aided design) as a template to control the printer’s extruder arm to lay down the material for the building’s large construction parts. The walls were printed with an interior zig-zagging pattern to provide reinforcement and leave space for insulation. After the parts were fabricated in their own facility, WinSun assembled them on-site, complete with steel reinforcements, to comply with official building standards.

BigDelta, the world’s largest 3D printer, is just as, if not more, impressive, as it is able to create budget-friendly mud huts in a single continuous printing session.

The 12-meter high machine is supported by a sturdy steel frame, while a rotating nozzle doubles as a mixer that keeps printing materials such as mud and clay homogeneous. 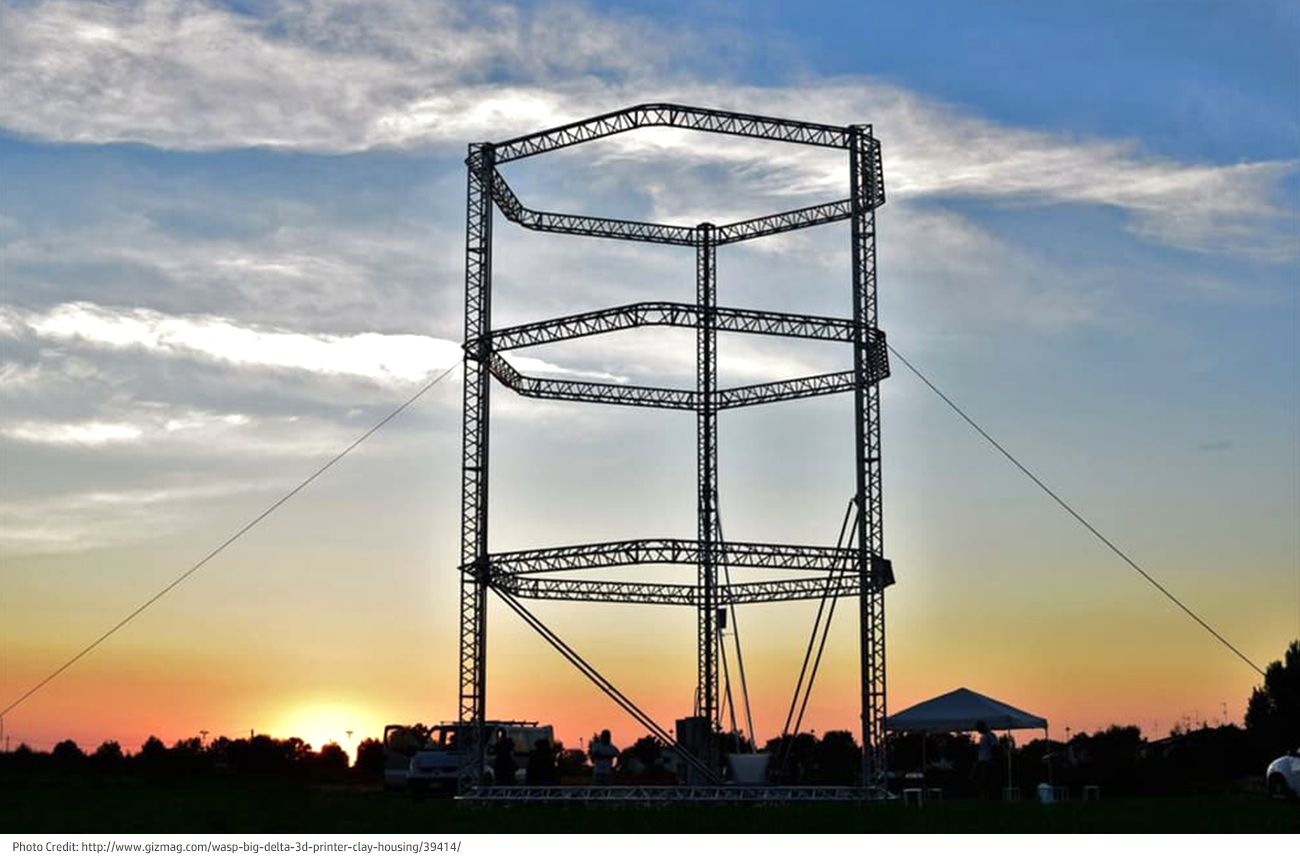 The machine was brought to life by the World’s Advanced Saving Project (WASP), an Italian collective, with the purpose of building nearly zero-cost housing through the use of local materials and as little energy as possible. WASP believes that the printer can offer quick and inexpensive relief to disaster areas, and that it may eventually provide a solution to housing shortages that are becoming increasingly more common amid a rapidly growing world population.

And, should we run out of space on Earth, 3D printing may be well suited for the construction of extraterrestrial structures on the Moon or other celestial environments where conditions are less conducive to human labor-intensive building methods.

Regardless of what direction 3D printing takes in construction, it is clear that it will change the industry as we know it. Whether this involves creating new aesthetic structures or providing low-cost housing, the buildings of the future are likely to be built much differently than those of today.