Everyone knows that climate issues are of top priority these days. Multiple companies and countries all around the world are working on developing sustainable energy — like solar and electricity. This is a measure to lower carbon emission which is pointed out as the main cause of global warming.

In this case, then, what could be done about the carbon that is already existent in the earth’s atmosphere? A company called ‘Climeworks’ came up with an idea that could be an answer to this question. The engineers at Climeworks developed a machine — it’s called ‘climeworks’ as well — that can capture carbon in the atmosphere and store it appropriately. The material that was perfect for building this facility was none other than steel.

How does this ‘Climeworks’ operate and how is steel is utilized here? Let’s find out as POSCO Newsroom presents worldsteel, “Steel-built Carbon Capture Machines Are Removing CO2 from the Air.”

The Climeworks project has set up a carbon capture and storage facility at a remote site in Iceland that is drawing CO2  from the atmosphere and safely storing it in the ground.

While the planet is increasingly transitioning away from fossil fuels, there remains the problem of what to do about the increased levels of CO2 already present in the earth’s atmosphere.

The search for workable decarbonisation tech has been ongoing for some time and the engineers at Climeworks have come up with a potentially workable solution. Indeed, the company is the first to operate a commercial carbon capture programme from ambient air, and steel is central to the technology’s design.

The huge machines which perform the carbon capture process resemble jet engines and use steel and stainless steel throughout their structure. The remote nature of Climeworks’ site locations and the extreme weather and natural wear from the process of carbon capture make steels perfect for the job due to their endurance and corrosion resistance. 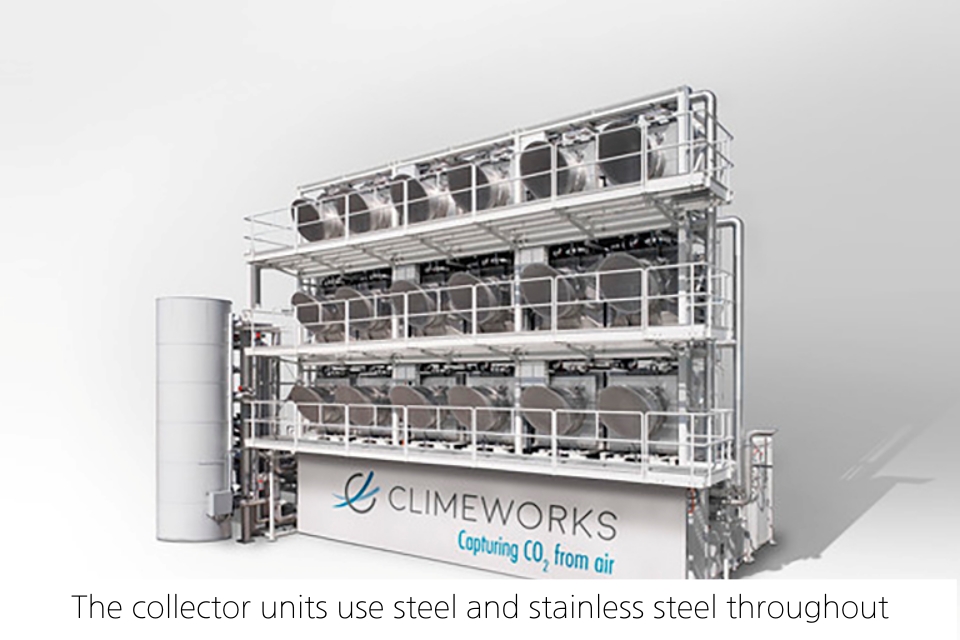 The CO2 collectors have been through many design stages to reach their current iteration, but the model in operation relies on massive fans to draw ambient air through the collector. This air is then filtered to remove CO2 as the molecules adhere to a specialised material contained within.

Once the filter is saturated with carbon dioxide, the collector is sealed and heated to around 100 degrees centigrade, causing the CO2 molecules to detach and be collected in a container. This concentrated CO2 can then be put to use in the commercial sector or seeded deep underground, locking it away.

The gas can be employed in an array of sectors, included carbonated beverages and agriculture. Climeworks’ leading facility in Switzerland pipes CO2 to a nearby greenhouse and the company also has a deal in place with Coca-Cola.

The central idea, however, is to inject the CO2 into basalt rock where over the course of a few years it will mineralise, sealing it away for millennia. Climeworks plans to provide this service to industries and governments looking to lessen their climate impacts.

A site in Iceland has been operating for a couple of years, already mineralising more than 50 tonnes of CO2, with plans to install further collectors down the line. A key aspect of success is bringing down the costs, which is difficult without a proven market for the service.

Energy companies and governments are not currently incentivised to operate emissions reversal technology and Climeworks is working hard to reduce operating costs in a bid to reach a commercially viable price per metric tonne of CO2.

Currently it costs the company between $500-$600 to remove a tonne of CO2 from the atmosphere, with $100 per tonne the target. As things stand, full scale operation of Climeworks’ tech is too expensive, but the company is confident it can reduce costs significantly over the next five years.

With solar energy 100 times cheaper than 50 years ago and wind energy around 50 times cheaper it is highly possible that efficiencies can be found. And, as with those renewable technologies, if this carbon capture programme is to achieve success it’s likely that steel will remain a key enabling factor.

The original content published on the worldsteel’s ‘Our Stories’ section is available at: https://stories.worldsteel.org/innovation/carbon-capture-machine-co2-climeworks/