For a Better World: 2014 Global Volunteer Week at POSCO Vietnam

In Hello, POSCO’s previous post, we introduced POSCO’s Global Volunteer Week initiative and how over 50,000 POSCO employees in 52 countries participated in various volunteer work under the slogan “For a Better World” during 2014 POSCO Global Volunteer Week. Today, we’ll have a close look at what our employees at POSCO Vietnam did to help out their local communities. Why don’t we jump right into the lively commentary full of warmth and compassion provided by our trusty colleague at POSCO Vietnam, Mr. Nguyen Van Nam? 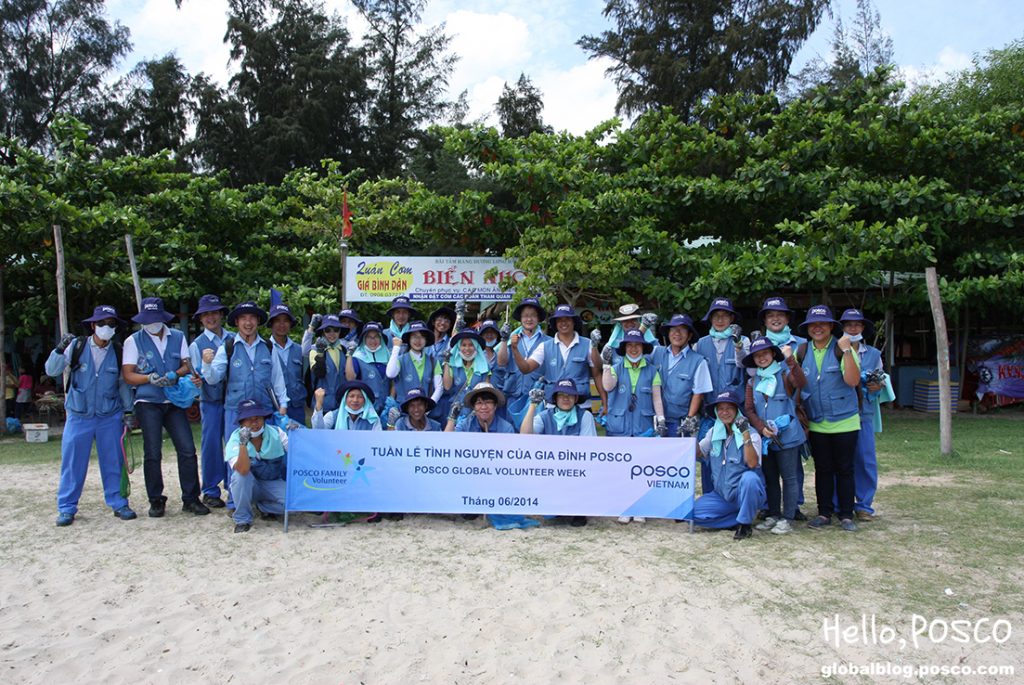 POSCO Vietnam’s volunteer campaign, which took place in 3 areas of the Ba Ria-Vung Tau province, was carried out under the theme “Protect the Environment and Aid the Disheartened.” To this end, POSCO Vietnam employees visited Ba Ria Hospital on June 10 to congratulate its 30th anniversary and serve food to its patients. Ba Ria Hospital has only 300 beds, but POSCO Vietnam prepared food for 700 people in order to serve not only the patients but also their relatives. 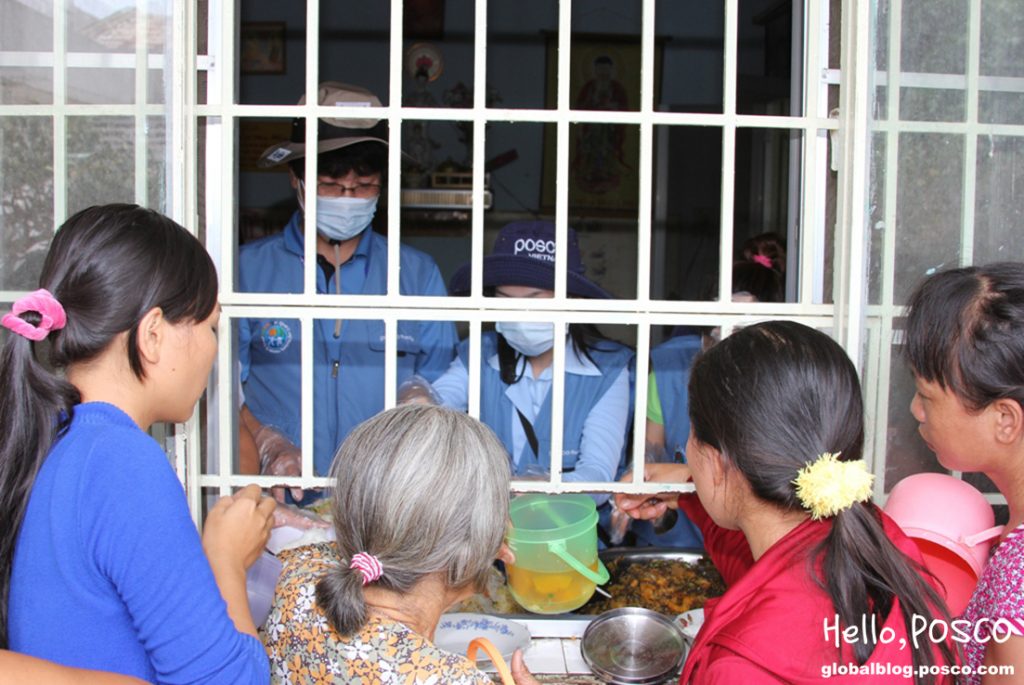 “This is the first time I’ve taken part in volunteer work in Vietnam,” said Mr. Yun Yang Su, a newly appointed general director of POSCO Vietnam. “It makes me happy to see the patients’ faces when they’re enjoying their food. I think they haven’t had anything to eat for hours,” he added. 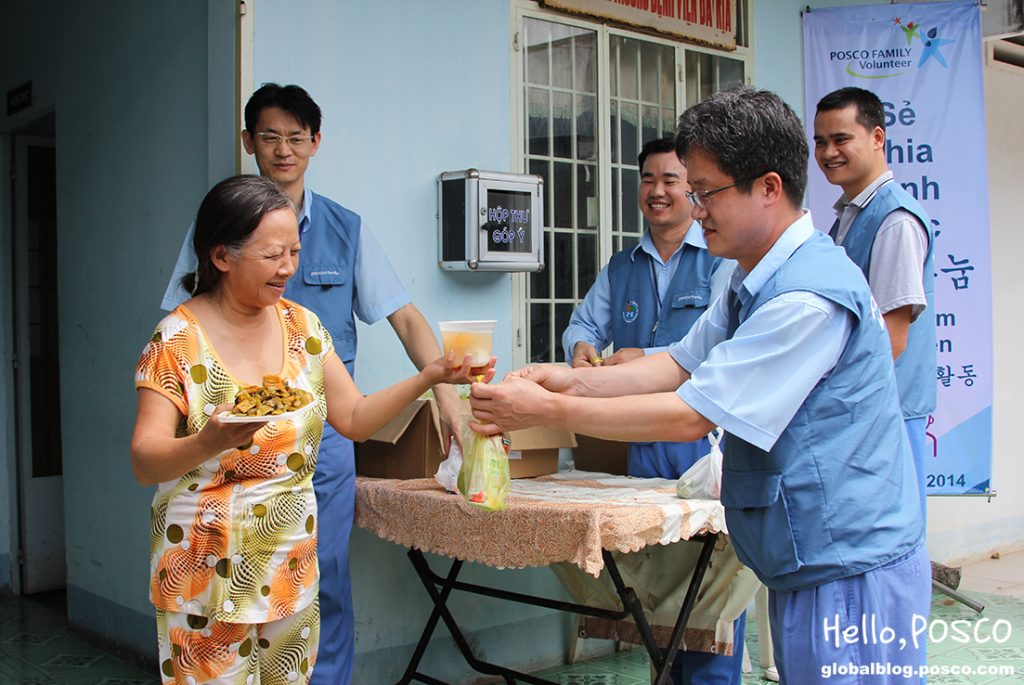 “This is the most delicious food I’ve ever had since I was at this hospital. Thank you POSCO Vietnam so much for my full meal,” said Mrs. Tran Thi Tam, 69, a patient who lives 40km away from the hospital. Despite her old age, Mrs. Tam lives in a tattered home and labors day after day to make a living. Much of her hard-earned money goes into the treatment and medicine for her heart disease. The rest is spent on bare necessities. Because she does not have enough money, she eats much less than she should, and her health condition is getting worse day by day. Mrs. Tam was not the only one in such a plight, and POSCO Vietnam employees felt mixed emotions of joy and sadness while aiding the patients and their relatives at Ba Ria Hospital.

POSCO Vietnam also visited Chau Pha commune of the Tan Thanh district. The destitute commune was facing three problems: First, there weren’t any handrails in the neighborhood’s two bridges which made it dangerous for the locals to cross. Second, the rainy season was expected to arrive in the end of the month, but most houses in the neighborhood had leaky roofs. Last, several houses lacked sufficient lighting for daily activities and for the children to study.

Repairing the community was a challenge, but POSCO Vietnam faced it with unparalleled enthusiasm: In just one day, the volunteer team finished installing handrails for the two bridges, fixed the roofs of 5 houses, and installed lights in 10 houses. 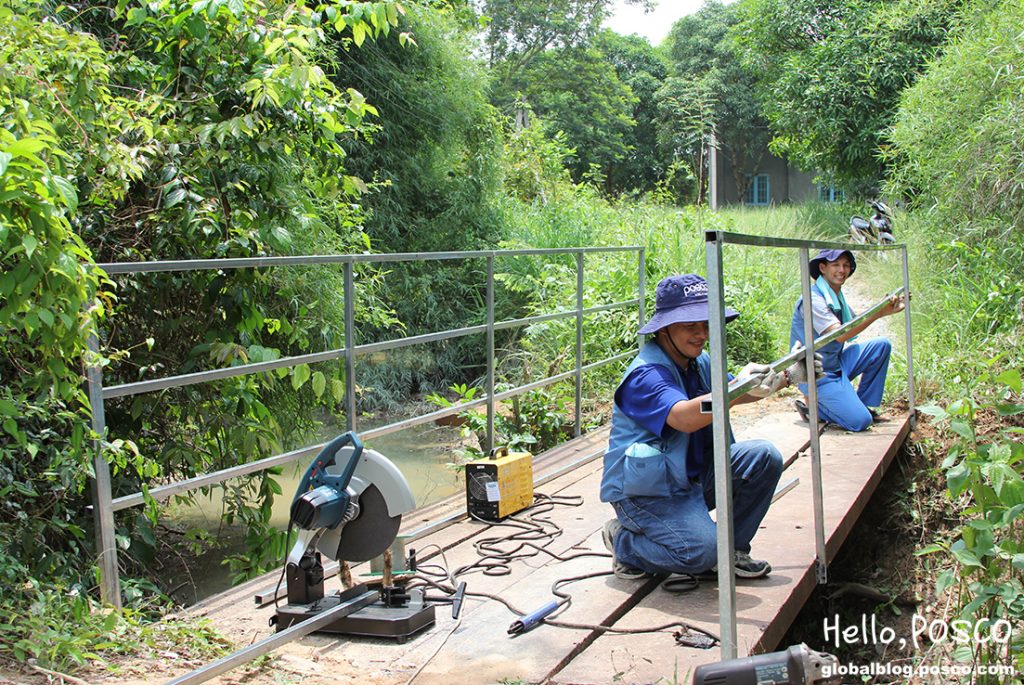 “Today, the POSCO Vietnam volunteers worked over noon to finish these bridges,” said Mr. Tran Van Lam, a resident living near the bridge. “When it rains heavily, the bridges often get flooded and people can’t see anything. Now with the handrails installed, my children aren’t in danger anymore when traveling to school crossing this bridge. I thank the volunteers so much,” he said.

Apart from performing general repair work, POSCO Vietnam volunteers visited the family of Mr. Nguyen Van Phong, who suffered brain and leg injury while working in a factory. Though Mr. Phong labored all his life, his earnings were meager. After becoming disabled, he stays in bed and depends on his wife for survival. POSCO Vietnam employees promptly visited the Phong residence after hearing about Mr. Phong’s plight. They fixed the leaky roofs and concreted the walls with thick nylon in case of heavy rain. They left with promises to come back in the near future to build an adequate home for Mr. Phong and his family.

Long Hai is a newly discovered beach at Ba Ria-Vung Tau province with beautiful transparent water which attracts thousands of tourists who come and enjoy every weekend. It would have been nice if these tourists enjoyed the beach without any environmental consequences, but the truth is that they leave a lot of garbage and waste such as plastic cans, nylon bags, and paper.

Although Long Hai is 50km away from the POSCO Vietnam office, it did not stop the enthusiastic volunteer team from jumping in to pick up the waste and garbage along the beach. 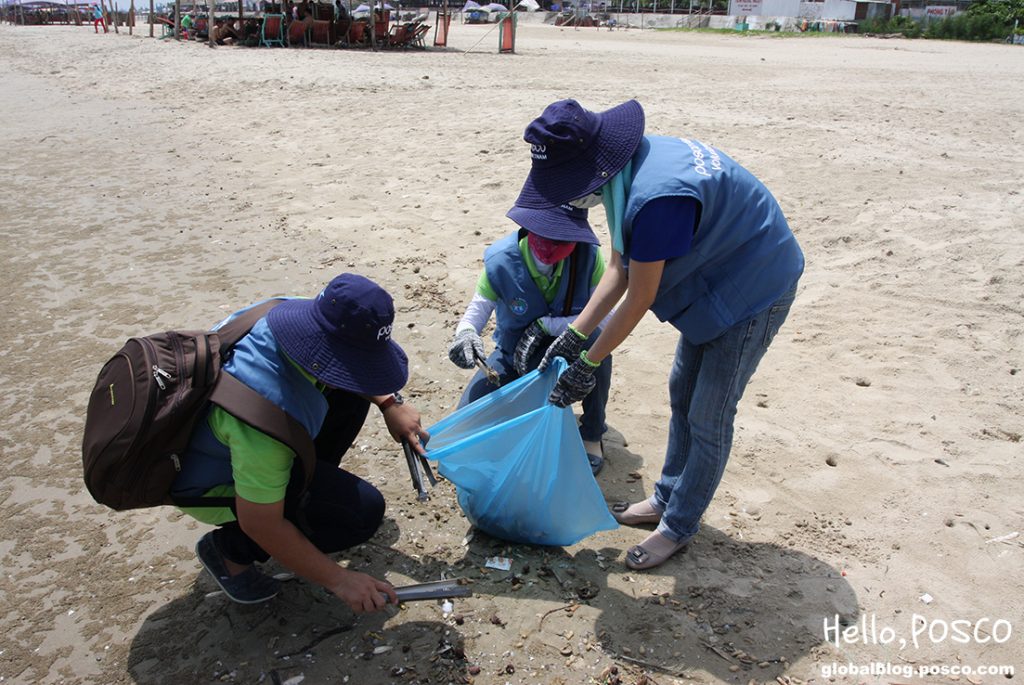 “It was so hot today, so we arrived early to collect the waste and garbage,” said Mr. Huy, POSCO-Vietnam’s manager of Training and Education Team. “Our goal was to raise awareness of protecting the environment to the local people and the tourists,” he said.

Moving Forward For a Better World

POSCO Vietnam aims to build a “POSCO Village” this year at the at the resettlement area of Tan Hoa commune in Ba Ria-Vung Tau province. Beginning in September 2014, the planned project consists of 85 houses for people in need to be built within the next two years.