Steel Wonders of the World: The Brooklyn Bridge

The Brooklyn Bridge has become one of New York’s most iconic landmarks since it first opened in 1883. It has arguably inspired more art than any other manmade structure in the United States. Georgia O’Keeffe, Andy Warhol and numerous other prominent painters have incorporated the bridge into their works, as have photographers, novelists and musicians. It has had its share of pop cultural cameos in TV shows and films, including “Godzilla” and “Spider-Man.” Yet, the story behind the iconic structure is just as fascinating as the legacy it maintains.

From a Dream to Reality 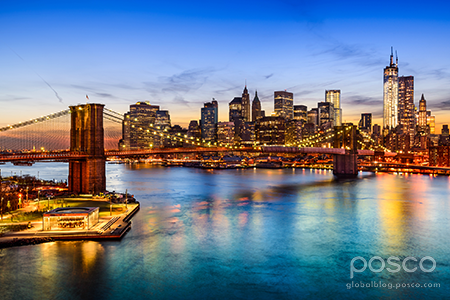 It all began in 1869 when German engineer John Roebling won the highly coveted contract to construct what was then the longest suspension bridge in the world. The Brooklyn Bridge, when completed, would stretch 1,600 feet across the wide East River that separates Manhattan from Brooklyn (which was not yet a part of New York City).
Having built four suspension bridges in the 1850s and 60s, including one over the Ohio River and another near Niagara Falls, John remained undeterred by the monumental feat. He planned the construction of the bridge. The foundations were to sink 70 feet below the river and the two mighty towers—which would be stabilized by adding a web truss to either side of the roadway platform—would dwarf much of New York. At that time, such a bold design seemed almost miraculous, and it was set to be constructed out of a new building material—steel.
Yet Roebling’s ambitious dream was to cost him his life. Before construction even began in 1869, Roebling’s foot was crushed between some pilings and a boat while he was surveying the bridge site. His toes were amputated and a few weeks later he died of tetanus. 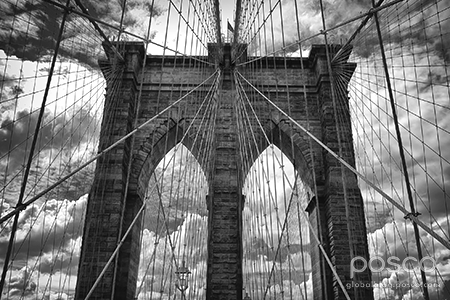 Despite the doubts of investors, his son Washington Roebling proved his ability to carry out John’s ambitions. Soon thereafter, construction began, as did the arduous task of sinking a gigantic caisson foundation while the first tower was built on top. The process took five months due to a number of issues, including fires and unexpected boulders. Similar problems were experienced during the sinking of the second caisson on the New York side. 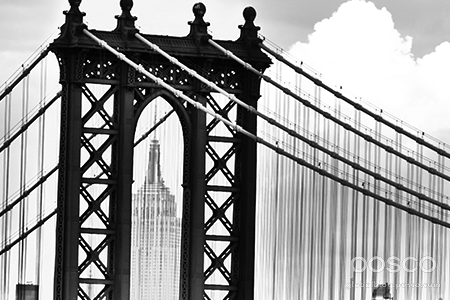 Nevertheless, Washington Roebling and his team labored deep beneath the East River, but this led them to develop a mysterious new disease, Caisson disease, which is widely known today as “the bends.” Washington himself eventually became bedridden with the bends, confined to his room and only able to watch construction through a telescope from his window.
Undeterred by his poor health and determined to finish what he started, Washington worked closely with his wife, Emily Roebling, to complete the project. Emily taught herself mathematics and engineering, and worked tirelessly to communicate between the structure and its creator. 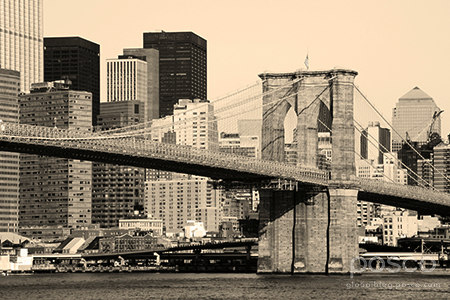 The towers were completed in August 1876, and it was then that steel wire began to be strung from one to the other. Finally, on May 24, 1883, enormous crowds gathered to watch the bridge’s opening ceremony. For Brooklyn, noted the New York Times, it was to be “the greatest gala day in the history of that moral suburb.” The date was also proclaimed an official holiday by Mayor Seth Low known as “The People’s Day.”
Celebratory cannon fire rang out when they reached the Manhattan-side tower. The festivities also included an hour-long fireworks display, receptions and a number of speeches. Just before midnight, the bridge was opened to the public, and more than 150,000 people streamed across over the next 24 hours.

The First of Its Kind 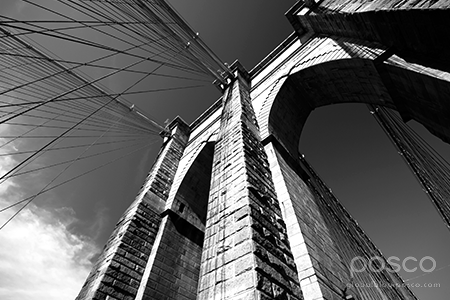 The Brooklyn Bridge not only inspired the people of New York, but also other architects and engineers who have since constructed remarkable structures themselves. Among these, the Golden Gate Bridge is perhaps the most recognizable. Spanning the Golden Gate, the strait between San Francisco and Marin County, the bridge was completed in 1937 after seven years of construction and remains one of the most popular tourist attractions in San Francisco, USA. Its famous red-orange hue was specifically chosen to make the bridge more easily visible through the thick fog that frequently shrouds the area.

Another noteworthy structure is the Akashi-Kaikyo Bridge, which traverses the Akashi Strait in Japan to connect the cities Kobe and Iwaya. At 1,991 meters (6,532 feet), it is the longest suspension bridge in the world. The Gwangan Bridge, South Korea’s largest bridge, was completed in 2008 and built entirely of steel—144,800 tons of POSCO steel and steel products, to be exact—and serves as the country’s representative steel bridge.
As bridges continue to serve as city landmarks and vital components of urban infrastructure, numerous countries choose steel as the material for large bridges. But it should not be forgotten that the movement began in New York, where the Brooklyn Bridge remains to stand as a memorial to the Roebling family’s vision, sacrifice and loyalty as well as a symbol of visionary engineering, national integrity and working-class heroism.

Watch the full episode of “Seven Wonders of the Industrial World” below: