Speaking with POSCO Members from the US and Colombia

‘Hello, POSCO’ has introduced a number of POSCO employees in overseas offices and several global interns. Today, we would like to introduce two special individuals from overseas working at POSCO HQ in Seoul. They may not look Korean, but if you hear them speaking the language, you just might be surprised. Here are Jonathan Droege, who works in the POSCO API Steel Sales Group, and Sergio Alejandro Rub, who works in the International Affairs Department. We interviewed them and talked to them about their passion and love for Korea and POSCO. 🙂 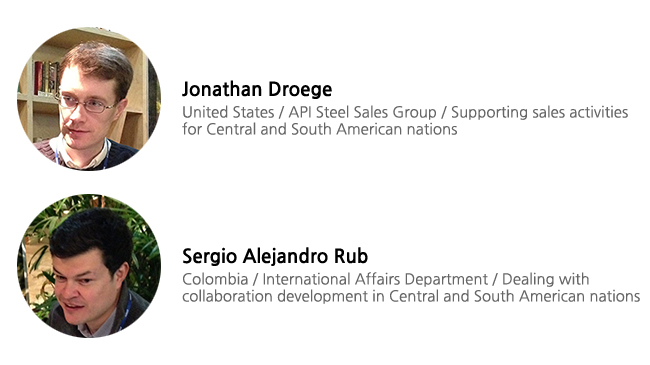 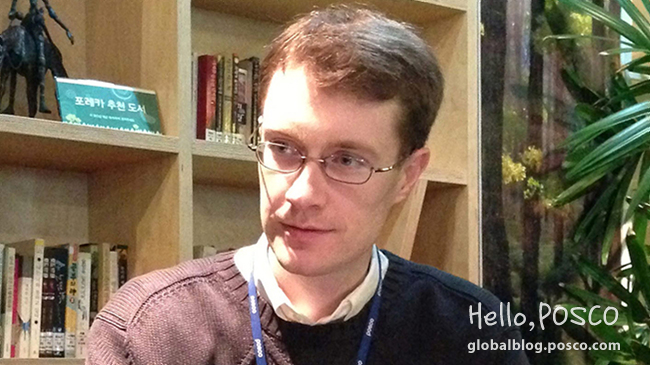 Hello, Jonathan. Could you briefly introduce yourself?
Hello, I’m Jonathan, and I’m originally from the US. Actually, it’s almost by chance that I ended up living in Korea. Wanting to travel and see more of Asia, I first came here as an English teacher. My plan was to stay only for one year, but then one turned into two, then three… While studying in graduate school here in Seoul, POSCO’s Global Internship Program came to my attention, and I decided to take the program for three weeks. Upon graduation, this experience turned into a job opportunity, and it has now been more than eight months since I joined the company.

You are working in the API Steel Sales Group. Can you tell us a little about what you do?
Primarily, I focus on supporting various sales activities in the API Steel Sales Group. This includes gathering market intelligence, responding to price inquiries and keeping an eye on the production status of bids we have won. Sometimes, there are surprises as well. Last week, for example, an inspector from one of our biggest Latin American end users made a surprise visit to Korea. She spoke no Korean and only minimal English, while the interpreter who joined us didn’t know very much about our specific product or the technical vocabulary related to steel. In the end, our communication was a mix of Spanish, English and Korean, with good doses of laughter and gestures to fill in the blanks. Personal contact like that makes the everyday routine of sales work worthwhile.

Do you communicate in English at the office?
I use both English and Korean. There are no major issues affecting communication between me and my group members. They speak English fairly well, and I put a little extra effort into listening since I know that English isn’t their mother tongue; same goes for when I speak in Korean.

There must be a corporate culture gap between the U.S. and Korea. When do you feel the difference the most?
First of all, I had never worked in a big company before joining POSCO, so I don’t really know if the differences I see are due to different culture or simply company size. In my previous job, if there was a problem, I could talk directly to the president. I would just knock on his door and go right in to talk to him. At POSCO, this is unconceivable – things have to travel up through the hierarchy; appointments have to be scheduled; official reports written up – it is all fairly bureaucratic. That seems to be the biggest difference that I see.

What do you want to achieve at POSCO?
I’m currently focusing on learning about industry and POSCO’s business practices. Although it is not certain for now, I hope I can be transferred to POSCO’s U.S. office. POSCO America isn’t very large yet, but building upon the experiences I have here, I would like to expand the company’s US operations. 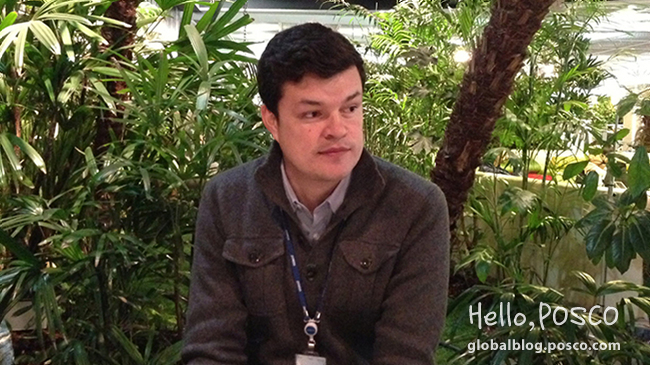 Hi, Sergio. Can you briefly introduce yourself?
Hello. I’m Sergio Alejandro Rub from Colombia. I came to Korea in 2011 and joined POSCO in January this year. I took POSCO Global Internship Program for about two weeks as well. After that, I started working full-time at International Affairs Department.

How did you know about POSCO, and how did you come to apply?
I was living in China in 2009. Back then, one of my closest friend’s father was working at POSCO. Well, that makes him my senior at work now. Anyway, that was my first encounter with the company. When I was doing a postgraduate degree, I was told about POSCO Global Internship Program, so I applied for it.

What do people in Colombia think of Korean companies?
Five years ago, no one really knew about Korean companies. Some people even thought that the major Korean conglomerates were Japanese companies! But now, it has changed a lot and there is an increasing amount of interests in the companies from Korea.

You are working in the International Affairs Dept. What is your daily routine?
I mainly deal with collaboration development in Central and South American nations. My task is to find possibilities for cooperation between POSCO and other companies and governments. My team and I analyze what measures it takes to develop new products, such as which company to work with or how to maintain relationship with governments. Pioneering new market frontier is also one of the International Affairs Department’s operations.

Is there any problem communicating with your colleagues?
Unlike Jonathan, I only use Korean to communicate. And since I only use Korean with native Korean speakers, I gain an advantage in improving my Korean. For any other purposes, I speak both Spanish and English.

Are there difference between working in Colombia and Korea?
Korean companies have different positions like assistant, manager and senior manager, right? In Colombia, there are no titles like that, so everyone’s equal. Also, Koreans go for drinks during weekdays, but Colombians hardly drink before weekends because we think it affects our work. For the past two years, I think I drank at least two or three days during a week.
We have something in common though. Koreans and Colombians both have a craze for soccer. Well, actually Koreans drink beers and eat chickens while watching a soccer match, but Colombians don’t drink much alcohol unless there’s a match for a Colombian national team.

What do you want to achieve at POSCO?
It’s only been three months since I started working at POSCO. So I want to learn more about the company. It would also be fantastic to get to know about the International Affairs Department more in depth.

Working at POSCO HQ as Foreigners

There are 17 foreign nationals working at POSCO at the moment. POSCO’s recruitment process for foreign nationals is undertaken as below. Recruitments are mission-based: in other words, whenever POSCO’s operations require appropriate talents from overseas. Details, such as period of employment, can vary depending on circumstances.