The Softer Side of Iron

Iron is typically thought of as a cold and stiff material, but when we consider how vital it is to our health and daily lives, we come to realize the undeniable importance of the element.

With human influence, iron becomes a material of warmth, offering sustenance, shelter and safety. Here are a few ways how.

Fishing for a Solution: How an Iron Fish is Treating Anemia 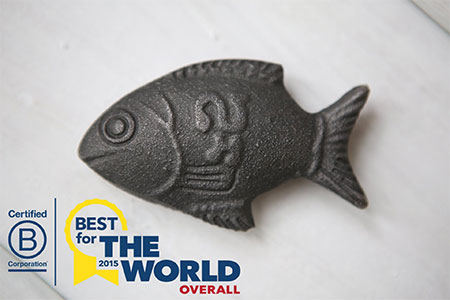 Apart from being a useful material, iron is also an essential part of our daily diet.

Anemia, a condition in which there is a lack of red cells or of hemoglobin in the blood, often the result of an iron deficiency, can leave people feeling weak, cold and tired. It is the most common and widespread nutritional disorder in the world, affecting approximately 2 billion people globally.

But that may change soon, thanks to a solution created by a group of Canadian health workers in Cambodia.

In 2008, fish-shaped cast iron ingots were developed by the group to provide dietary supplementation to individuals affected by iron-deficiency living in poverty. When placed in a pot of boiling water, the ingots release elemental iron into the water and food being cooked.

The solution was considered such a huge success that in 2012 the Lucky Iron Fish Project was formed to develop the iron fish on a larger scale, promote the product in rural areas and distribute it to non-governmental organization partners.

The inexpensive iron lumps shaped like smiling fish are 7.5 centimeters long and have a lifespan of about five years.

The Lucky Iron Fish, which is said to release iron at exactly the right concentration to provide up to 90% of the recommended daily iron intake for an entire family, is now being used by thousands of Cambodians. In fact, more than 50,000 Lucky Iron Fish have been sold worldwide and the solution has helped to correct iron deficiency in about 90,000 people and more than 15,000 households. 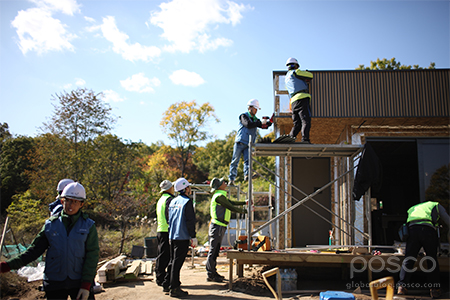 The power of iron is even more impressive when combined with love and goodwill. A perfect example of this is POSCO’s Happy Steel House—a project that helps those who have recently lost their homes get back to normal life as quickly as possible.

The Happy Steel House was first established by POSCO in 1996. These homes are built to be resistant to natural disasters like fire, earthquakes and storms, but more importantly can be constructed within two weeks. 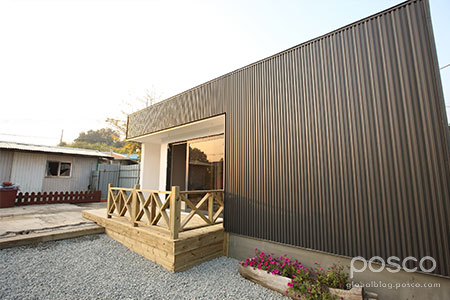 More significant than the improved design was the fact that the base of the Happy Steel House grew sturdier with every new home that was built, including those constructed for 16 Korean families who lost their homes to fires. This was achieved by applying the expertise of POSCO’s executives, staff members and global youth volunteers, as well as warmth and caring for those in need.

Building Bridges as Strong as Steel 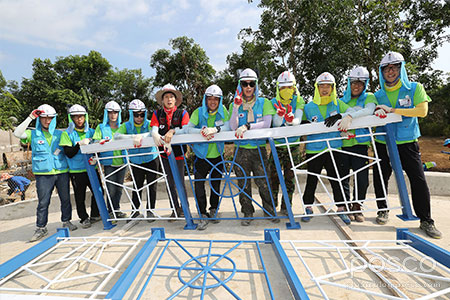 POSCO’s mantra of volunteering and sharing is also playing an active role in other parts of the world. In Vietnam, where tropical monsoons are common, POSCO built a steel bridge for communities affected by floods.

Due to heavy rainfall six months a year, Vietnam’s bridges often become submerged under water during the wet season. This makes transportation a huge safety concern for locals.

What’s even more worrying is the fact that many young students use these bridges on a daily basis to commute to school. Since most of the wooden bridges do not have a handrail, it is even more dangerous for pedestrians, as they are unable to see where the bridges begin and end. As such, young children often trudge through flooded areas blindly in an effort to make their way across to get to school in time.

In order to secure safe traveling, POSCO built a steel bridge in Ba Ria-Vung Tau Province’s flood area, Da Bac, with the help and hard work of employees and affiliates.

The “POSCO Vietnam Holdings – Steel Bridge” boasts steel handrails to provide a safe and sturdy way for the students to walk to school.

POSCO’s steel bridge was successfully completed with the help of POSCO’s global youth volunteers, POSCO A&C’s design, POSCO SS VINA’s supplies and POSCO E&C’s handrail work and construction. Thanks to these contributors’ talent and love, students and local residents in Da Bac are getting around safely, even during the wet season.

From iron health supplements to the roofs that shelter us to the bridges that help us reach our destination, iron is keeping us warm, happy and healthy. 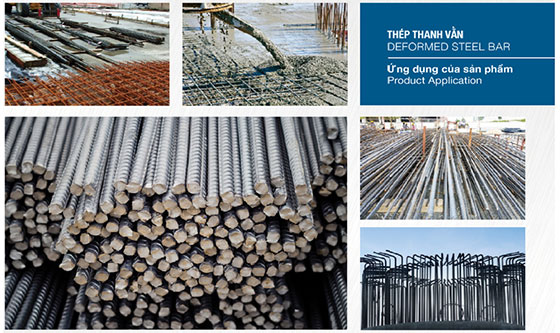