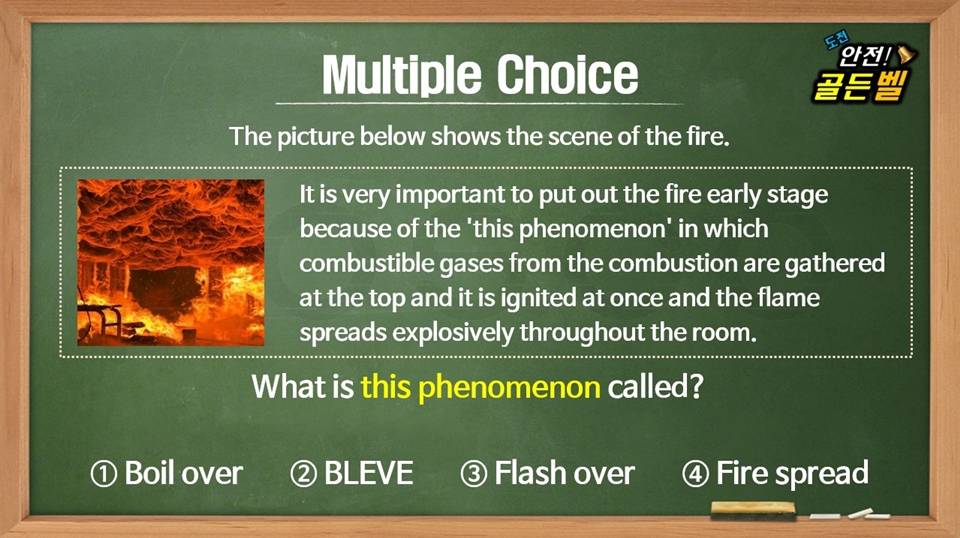 The answer to this question is revealed at the bottom!

The above quiz was one of the questions at the POSCO ‘Safety Golden Bell Challenge’ held in Pohang last year. Those who find it hard to answer could perhaps take this opportunity to learn about it today. Why? It’s because the more you know, the safer you become. Safety is POSCO’s core value.

Around 30,000 employees of POSCO and partner companies participated in the preliminary rounds of the Golden Bell Challenge, and 400 of them qualified for the main game. The main game was held in Pohang on October 25 2019 and was attended by a total of 1,000 people, including POSCO CEO Jeong-Woo Choi and 600 others who came to cheer.

Various questions regarding the company’s safety regulations and the Korean Occupational Safety and Health Act were covered at the ‘Safety Golden Bell Challenge.’ At the event, several performances demonstrating POSCO’s safety message were carried out, along with some bonus quizzes for the audience. All participants could enjoy the events while acquiring safety education at the same time.

POSCO’s ‘Safety Golden Bell Challenge’ is not about winning or the competition itself. Of course, some questions aren’t easy, like the quiz above. But the real purpose of the challenge is this: creating a ‘safety community’ where all employees, including at partner companies, protect each other — with a little entertainment along the way.

POSCO has expanded its budget for the safety sector and has put in a lot of effort in securing the safety of employees, like investing 1.105 trillion KRW for three years from 2018 and establishing a safety control tower company-wide.

In addition, POSCO has expanded various Smart Safety devices, including Intelligent CCTV, robots, and recently gave away Smart Watches that can send rescue signals in case of hazardous accidents to 1,200 working at the steelworks to secure the safety of its employees. However, these devices cannot be all when it comes to safety. The many safety capital and infrastructure investments should be met with the employees’ self-recognition of the importance of safety and encourage each other to change. This is the reason why POSCO planned the ‘Safety Golden Bell Challenge’.

POSCO’s ‘Safety Golden Bell Challenge,’ which was participated by around 30,000 employees of POSCO and partner companies, drew the attention of worldsteel. And with this program, POSCO was selected for excellence in the ‘safety culture and leadership’ area by worldsteel this year. 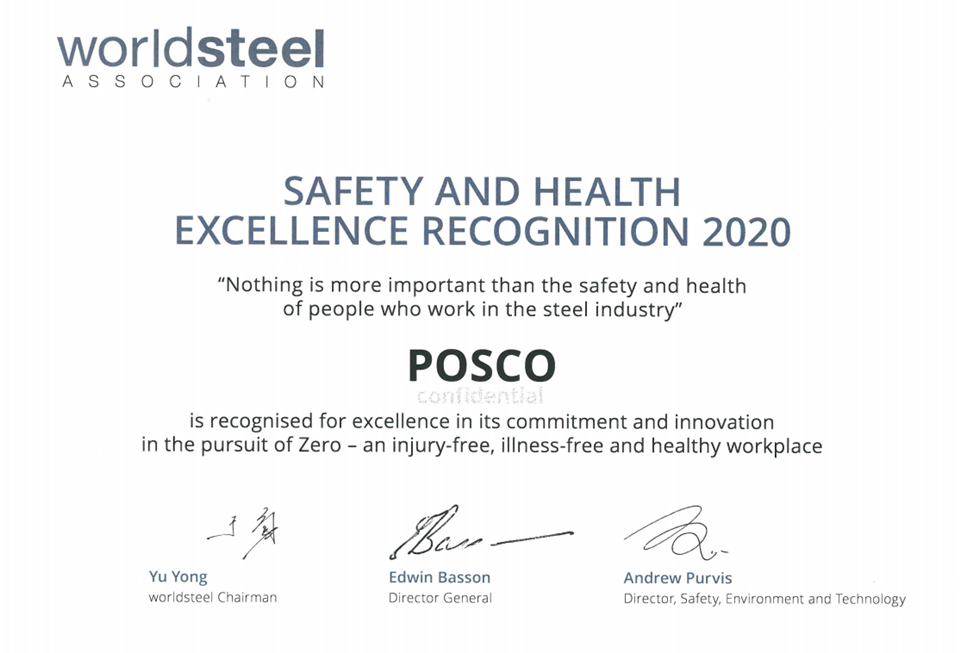 POSCO was recognized for putting safety as the core value of employees and providing a space where employees can connect and upgrade the safety competence of individuals voluntarily while promoting the vitalization of safety activities.

POSCO acquired high regard from the evaluation carried out in the following four sectors: management support, impact on metrics, leadership maturity, and broad and deep participation.

In particular, POSCO received high praise in terms of encouragement from top executives, including the CEO, and initiative and motivation of management supervisors. The safety program yielded noticeable positive effects, such as an increase in finding potential risk & participation in safety activities and a decrease in unsafe behavior.

▲ Comparison of six months after the ‘Safety Golden Bell Challenge’

Worldsteel has designated April 28 as Steel Safety Day to raise awareness of safety through extensive on-site safety inspections of its member companies (amounting to about 170 companies). This year, however, the event was postponed to October 21 and was held online due to the influence of COVID-19.

The awardees of the Safety & Health Excellence Recognition were supposed to give a presentation session of related activities at the worldsteel’s regular meeting. However, with the meeting canceled this year due to the COVID-19, a webinar (online seminar) is to be held on November 11 instead, where POSCO will be giving a presentation on the Safety Golden Bell Challenge with a question and answer session.

* Answer: ③ Flash Over: A phenomenon in the early stages of a fire, where combustible gas gathers near the ceiling and explodes as a whole.