Protected by Steel from Head to Toe

Dating back to the fourth century B.C., steel has been used to protect those wielding undeterred courage and a strong sense of adventure. From early sword-swinging battles to World War II and modern-day work environments, steel continues to serve as a layer of clothing that separates life from serious injury and even death.

Chain—Linking the Past to the Present

When we hear about chainmail, historically referred to as mail, it is easy to imagine medieval knights riding horseback through damp, grassy battlefields.

Mail has been used globally for centuries as an important piece of body armor that when worn, could be the difference between life and death. When it was first developed, mail was forged by connecting a series of small wrought iron rings. Later on, heat-treated steel became more widely used because of its improved durability. 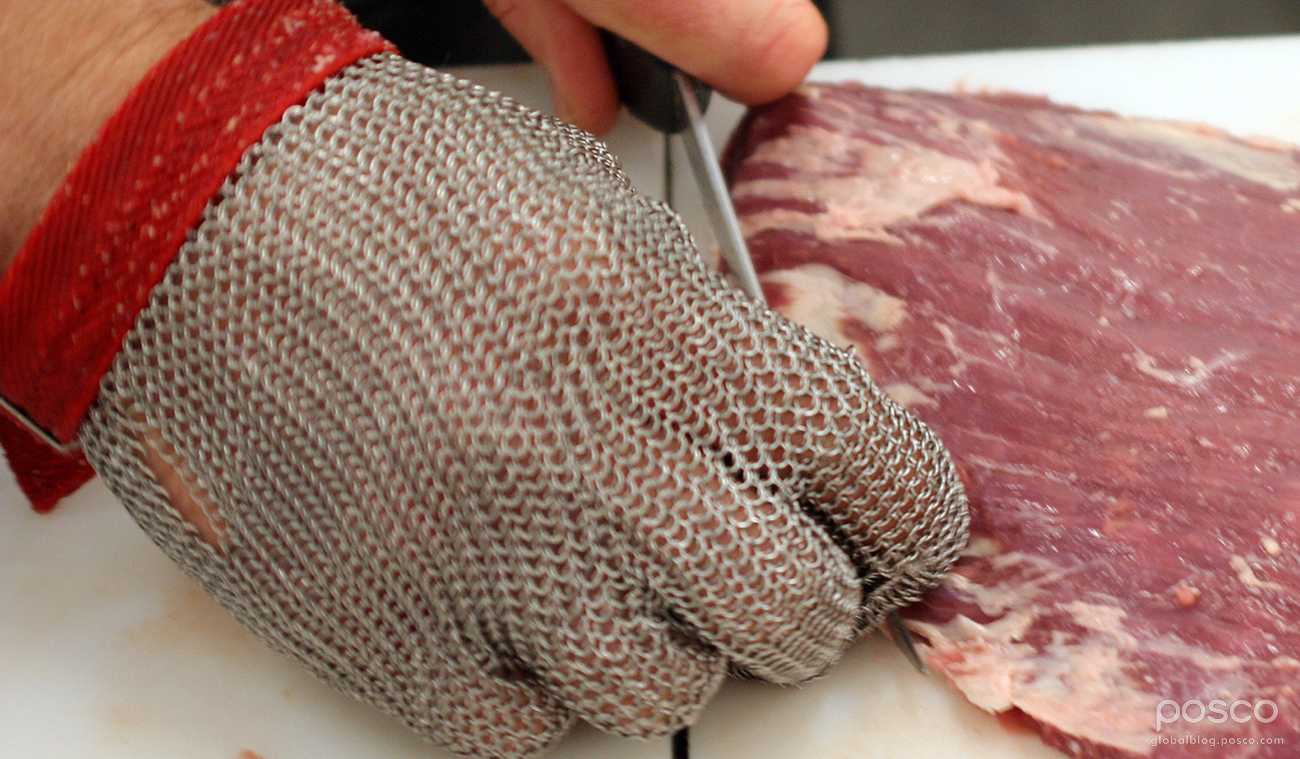 Today, steel chainmail has many practical uses as protective clothing. Butchers, for example, wear steel chainmail coats and gloves to protect themselves while operating large knives and blades. Woodworkers also wear similar chainmail gloves to prevent accidents such as punctures and cuts.

In 1980, marine biologist Jeremiah S. Sullivan developed an armored wetsuit to protect divers against shark bites. The steel mesh suits were meant to deter sharks from wanting to take a bite out of the wearer, and have proven successful to an extent.

Modern “sharksuits” are developed by the company Neptunic, which utilize steel mesh to protect aquarium workers and underwater photographers. Much like the early medieval adaptations, these steel sharksuits carry a heavy price tag and limited mobility.

Protecting What Matters Most

In 1941, the United States made improvements to their military helmets using steel. The steel M1 helmet was designed to better protect American soldiers during World War II and by 1945, over 22 million M1 helmets were manufactured.

Each helmet was constructed from a single piece of Hadfield manganese steel, and was strong enough to stop a bullet. Because the helmets were constructed from durable steel, they took on many other uses as well. Soldiers found their helmets to be extremely effective entrenching tools, hammers, seats and occasionally, cooking pots.

The M1 helmet was so effective, that it only began to be phased out during the 1980s, seeing action in the Korean War, Vietnam War and other conflicts across the globe. While the United States has stopped issuing the M1 helmet, it is still widely used internationally, and is a highly sought-after item of collectors of military memorabilia.

These Boots are Made for Walking

Properly equipping workers in hazardous environments is crucial. Construction, mining, oil and gas, heavy metal fabrication, agriculture, forestry and manufacturing all offer many ways for workers to put themselves (and their feet) at risk on a daily basis. Dropping heavy equipment on a toe, or stepping on a sharp object that can pierce a foot are dangers that can be avoided with steel-toed boots.

Quality work boots are typically reinforced with a steel toe that, along with protecting against heavy falling objects, can also shield feet from other lurking dangers like chemical waste. Steel toe boots are a vital part of any industry worker’s outfit, and help to keep them injury-free each day.

In addition to the many other ways steel can be utilized in protective clothing, it can also be used as a maternity shield. With the abundance of mobile devices, computers, cell towers and other radio frequency-emitting culprits, there is a threat of non-ionizing radiation that moms-to-be are rightfully concerned about.

Stainless steel fibers are being woven into maternity clothing, adding an extra layer of protection. The stainless steel fibers can be blended with other fabrics like cotton and polyester, forming fashionable and comfortable tops that reduce the risk of everyday radiation exposure. The metal fibers have been shown to shield more than 99 percent of electromagnetic waves, providing new moms with peace of mind.

Steel has been protecting humans from danger for centuries, becoming more versatile and extensive with its capabilities over time. With advancing technology, it will be fascinating to see the ways that steel will be used in future protective clothing, as it continues to keep us safe from head to toe.