Unlike the below zero temperatures during winter in Korea, temperatures in Vietnam surpass 40 degrees Celsius, even in January. In order to spread the POSCO spirit of sharing, Beyond, POSCO’s university student volunteer group and the POSCO Global Volunteer Group have been actively participating in building houses for underprivileged families in Vietnam.

One hundred twenty members of Beyond and 58 employees of the POSCO Group are laying bricks until January 17 in Ba Ria-Vung Tau Province’s Tan Hoa community as part of the POSCO Village construction project. 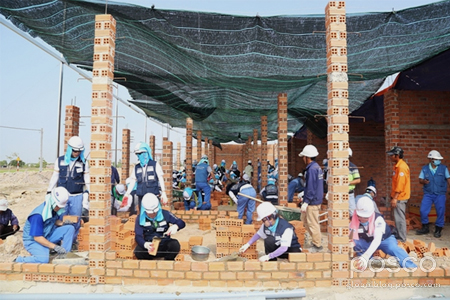 A total of 180 volunteers from Beyond, POSCO’s university student volunteer group and the POSCO Global Volunteer Group participate in the “Vietnam POSCO Village” project at Ba Ria-Vung Tau Province’s Tan community despite the sizzling hot weather in order to provide safe living environment to low-income households.

Vietnam POSCO Village is a voluntary project initiated by the POSCO 1% Foundation, the local government and HABITAT to build a total of 85 houses and to construct water supply and sewage systems for low-income residents in Ba Ria-Vung Tau Province.

Volunteers have been supplying houses to the community where residents live under poor living conditions, and they have also been working on environment improvement activities by holding sessions to guide them on how to build and manage houses and maintain daily hygiene.

Although Beyond and the POSCO Global Volunteer Group visited the construction site on different days, each group worked under sizzling hot weather conditions to provide safe shelter for 16 households.

The ninth Beyond Group, comprised of college students nationwide, volunteered in the local community with a focus on Pohang, Gwangyang and Seoul during May of 2015. The volunteer work at the time included repairing houses, painting murals, mentoring in English and shooting photos of active seniors enjoying life. Since then, Beyond will participate for the first time in volunteer work overseas. The third Vietnam Beyond Group is comprised of exceptional local Vietnamese students that are receiving support from POSCO TJ Park Foundation.

This year’s volunteer work holds special significance, compared to last year’s, as the volunteering duration was extended twice the length of time, allowing volunteers to participate from the very initial phase of the construction, which includes lifting and piling bricks and leveling the ground. Also, the volunteers introduced the beauty of Korean culture by displaying a wide range of cultural performances during the Korea-Vietnam Youth Culture event hosted by the local Diplomacy Center of Ba Ria-Vung Tau Province.

Meanwhile, Youngpoong Footwear, POSCO’s material purchasing group and supplier, has donated 100 pairs of safety shoes to share support. Some of these shoes were worn by the Beyond members at the construction site for protective wear during their volunteering experience, and the remaining shoes were delivered to HABITAT so that both domestic and foreign volunteers can use the shoes while volunteering.

The third POSCO Global Volunteer Group showed a splendid spirit of sharing at a contest in which the POSCO Group employees participated, marking a record breaking competition ratio of 10 to 1. A total of 58 people, including 24 POSCO employees, 32 from the POSCO Family and 2 from outsourcing partner companies were shortlisted for the POSCO Village project which took place from January 9 to January 16. The POSCO Village project is highly significant in that it is a donor participatory volunteer project where the volunteers visit the construction site in Vietnam during their leave.

Regardless of the intensive labor work throughout the project, the volunteer groups happily participated in building houses, piling up bricks and painting colorful murals on four different walls within the village. The volunteers also created a steel playground for children to guarantee their safety and happiness. 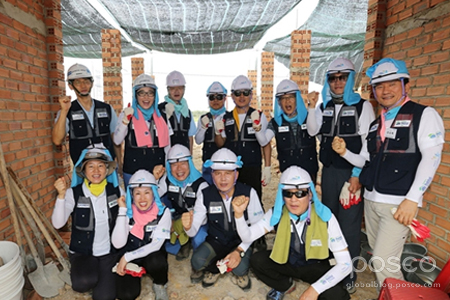 Age means nothing when it comes to sharing! The POSCO Global Volunteer Group gives a shout out to Vietnam after deciding to use their vacation time to fly to Vietnam and volunteer.

Kihyun Shin, a POSCO E&C employee who participated in the volunteer work this year, said “My dad visited Vietnam twice as a war veteran, so my dad considers Vietnam his second home… I am deeply touched to bring warm smiles to people in Vietnam, on behalf of my dad.”

In the meantime, a dedication ceremony for POSCO Steel Bridge was held at a nearby village, DA BAC Commune, on January 14 in the midst of the service.

The POSCO Steel Bridge project aims to resolve DA BAC Commune residents’ safety and transit issues caused by the frequently flooded bridge during the rainy season. In doing so, the current bridge is being replaced with a strong steel bridge with handrails.

The Steel Bridge project is receiving favorable feedback in that the POSCO Group companies have united their capacity to the max and improved the safety of local residents in Vietnam. POSCO Vietnam carried forward a construction consent, while POSCO A&C looked after the design layout and POSCO E&C took charge of manufacturing and construction. POSCO SS-VINA provided six-ton steel bars and POSCO Vietnam Holdings was in charge of public relations on-site.

On the day of the dedication ceremony, all members of the POSCO Global Volunteer Group and Beyond, Sunwon Kim, the president of POSCO Vietnam Holdings, the president of the POSCO Group’s partner company, as well as 300 local residents and the chairman of the village celebrated the completion of the bridge construction at the site.

The Steel Bridge is expected to offer a big hand in settling the community’s endemic problems such as safety and traffic obstruction issues, which are experienced by local residents during the rainy season.