l Compared to the conventional method, the P-Box technology reduces construction costs by 15% and column width by 40%
l POSCO to extend the implementation of the ‘Business With POSCO’ vision by sharing the technologies with the collaborating SMEs and customer companies

On July 23, POSCO’s new product POSCO-Box Column (P-Box column), along with the P-Box pillar and ledger beam bonding technology received designation as ‘new construction technology #868’ by the Ministry of Land, Infrastructure, and Transport.

The core of the new technology is to connect horizontal reinforced concrete to the P-Box steel pipe column filled with concrete. This POSCO-exclusive technology is likely to innovate the market. 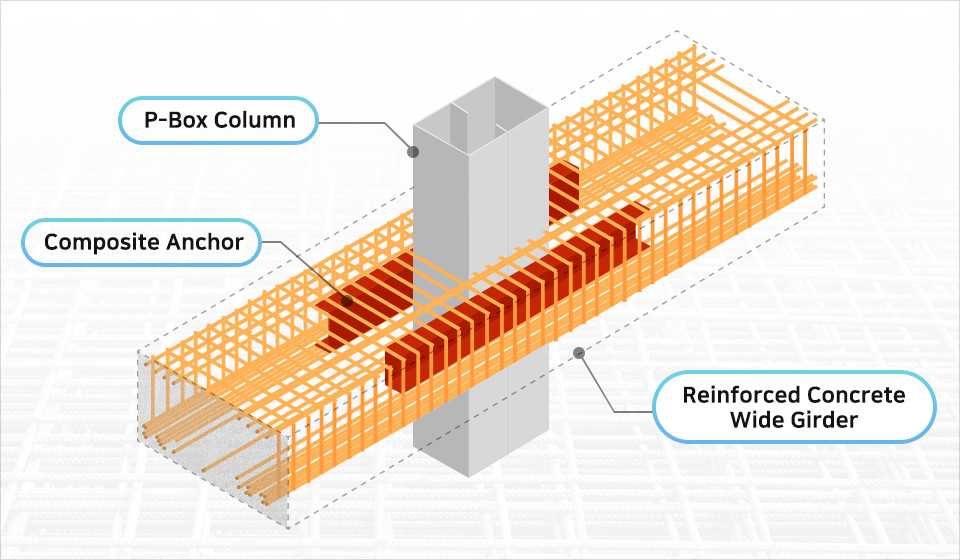 P-Box was created off of HSA600*, one of POSCO’s World Top Premium (WTP) products with a guaranteed tensile strength of 600 megapascals (MPa). POSCO is currently the only steelmaker capable of producing hot-rolled steel with that level of tensile strength equipped with seismic performance.

P-Box has been created by first bending HSA600 into square columns – inside the columns were then filled with concrete to boost strength.

The P-Box reduced the number of welding by folding hot-rolled steel – it only needs one welding in the center. This simplified manufacture process, and thanks to the stiffening member, constructors can apply 6mm boards instead of the previously-used 9mm boards.

Then, the connected anchors and P-Box columns are transported to the construction site where reinforced girder is horizontally attached to the anchors.

Because the height of a P-Box is 15 meters, the new technology can erect three floors at one go, instead of one floor, to dramatically save costs and time in constructing a building.

Replacing the conventional columns straight with P-Box columns posed as the main challenge because of the cost. To address the conundrum, POSCO decided to utilize girder, a wider beam that connects columns. These girders have a wider width than the columns. Since the girder width increased, it could sustain more weight. This meant constructors could use less number of girders. For example, conventional technology requires two girders whereas the new technology needs only one. Also, the new technology can do away with beams (smaller version of girders) that connect girders.

Additionally, conventional technology required 1,000mm x 1,000mm columns whereas the P-Box technology can sustain the same weight with just 500mm x 500mm columns. Smaller columns meant added spaces that can be utilized inside a building. The new technology brings down construction costs by 15% — it’s also a sustainable technology as it reduces carbon emissions. 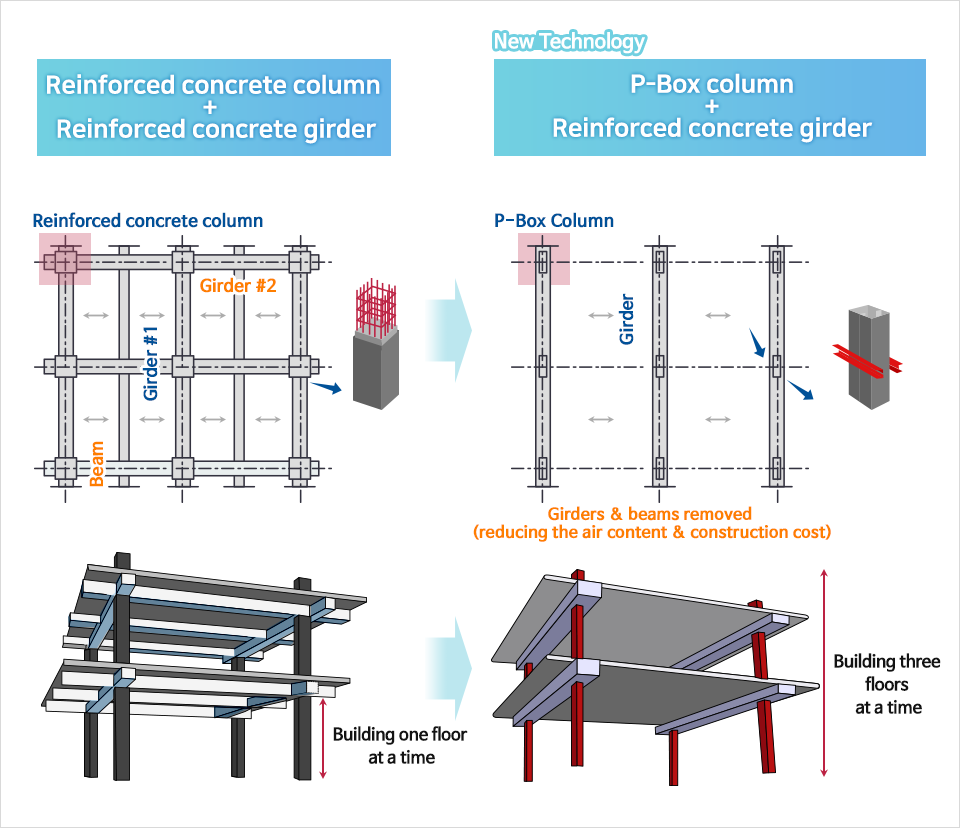 The technology has already proved its marketability — it has been applied to more than 11 buildings, including an attached parking lot at Shilla Seoul hotel in Jung District of central Seoul, city development business district and facility in Munjeong-dong, Songpa District, and new apartment complex in Hanam, Gyeonggi Province. An architect from Hoban Construction, one of the participating construction companies, expressed his satisfaction with the new technology by saying, “the new technology reduced the construction cost as well as the construction period by 15%. The column width was also reduced by 40%, so the areas we can lease increased.” The Hanyang technology engineer said, “POSCO’s P-Box allows 15 meters height at one go, a huge improvement from conventional construction technology.”

Designated as ‘new construction technology,’ the P-Box bonding method will have 8 years of term of protection period. During this period, the Land ministry will advise ordering organizations to place priority in applying the new technology and provide merits or additional points to builders upon contractor qualification evaluation.

Jin-Won Kim of POSCO Technical Research Laboratories who led the research and development of the technology said, “The conventional construction method required lots of human labor in the field. The high labor costs posed as a major challenge. We developed new technology to provide solutions in construction business through POSCO materials and technology.”

With such determination, POSCO’s cross-department collaboration not only created HSA600, the base material for the new technology, but also led to the successful mass-production of the HSA600. The subsequent development of P-Box bonding technology and the new technology designation process took about three years. Kim expects the P-Box will help increase the demand for the more economical and stable new technology (over labor-intensive conventional technology, both in Korea and abroad.

Along with HSA600 and P-Box column technology, POSCO is providing various WTP products and solutions for the construction markets. In addition to structural materials, POSCO also developed products utilizing its PosMAC — interior-exterior materials, solar furring, etc that can sustain longer. Meanwhile, POSCO will use this opportunity to extend the implementation of the ‘Business With POSCO’ vision by customizing products and technical supports to boost its marketability.