Are you hungry for a good career advice from female mentors working in your industry? Don’t miss out on the 3rd POSCO Women Leadership Series! The series reflects the concern of female workers who are examining their current status while exploring new possibilities for the future amidst rising female power in the working space.

Following the previous interview with female executive Young Choi of Daewoo International, today we met with POSCO Research Institute (POSRI) deputy director Lee Yoon Hee. In the male-dominated steel industry, Lee is holding her own, leading her team with her trademark “soft charisma.” Shall we head on and have a listen to her story? 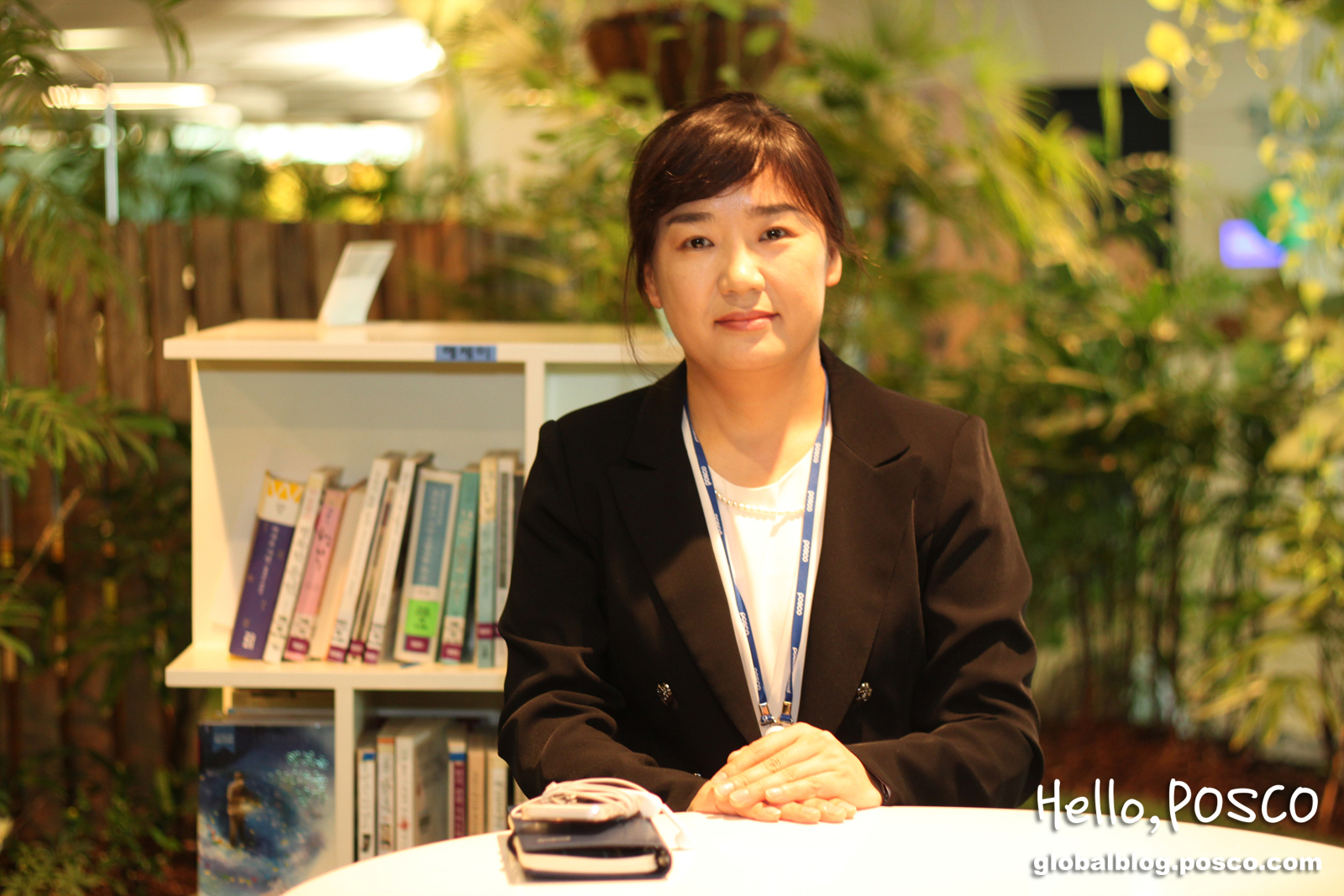 Could you please tell us what made you knock POSCO’s door, and about the work you’ve done at POSCO ever since?

While I was preparing for my post-grad school entry, a friend tipped me about a job opening at POSCO, which were exclusive for female students only. At the time I actually preferred to continue my studies rather than work for a company, but my professor and parents talked me into going for some good work and real-life experience. I was sold and applied for the job.

My first post when I joined the company in October 1990 was the secretary’s department located at Seoul. There, I worked for a year as then-president Park Tae-jun’s secretary. Next Fall I relocated to the management examination department located at Pohang. The new department was devoted to examining the local economy, market demands, and industry trends.

Afterwards I started afresh as a researcher when the Research Institute of Industrial Science and Technology (RIST) and the examination division of the Planning and Coordination department merged to form the new POSRI. Since 2001, I have worked on building marketing strategies and analyzing the steel industry and our competitors.

When was the most rewarding moment during your time at POSCO? 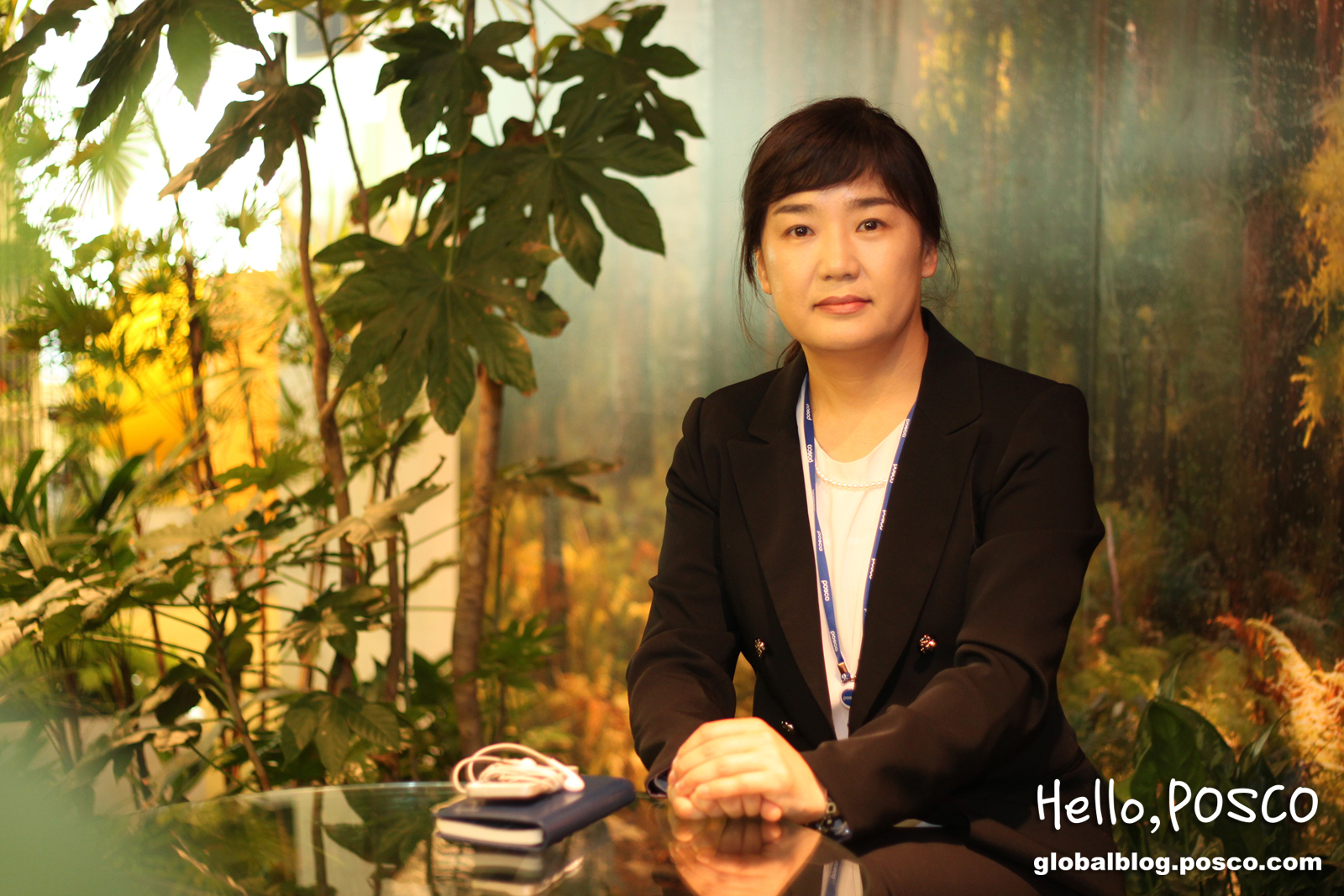 I’ve worked 3 years and 10 months at POSCO and 20 years as a researcher at POSRI. At POSCO, the year I worked as a secretary was the most memorable and rewarding. The Management Instructions Administration System had been newly introduced when I was assigned to the secretary’s department. I was in charge of recording the president’s and the vice-president’s instructions into the system, and relaying them to related departments.

The departments would correspond by submitting task results or countermeasures, and in turn the management would develop new strategies based on those reports. While experiencing the entire process, I was enthralled to have fulfilled my duties as a secretary by contributing to the work of my superiors.

On the other hand, the most personally rewarding work I’ve done as a researcher was the publication of steel industry research. Doing various unique research on steel commerce including the Korea-US steel tariff issue, competition rounds, and case studies on multiple commercial conflicts on several local industries, I could feel a genuine sense of duty in my work. I took pride in the idea that the research we were doing set us apart from other research centers, and that I was contributing to my country’s economic and social development through the steel industry.

A stalwart career amidst a male-dominated steel industry

When were difficult moments as a female worker, and how did you find the strength to march on?

Initially, it was difficult to withstand all the attention I received as someone who entered a predominantly male culture through a female-only recruitment. I was anxious to prove that gender doesn’t matter in the workplace, which drove me to pay more attention to detail and not make mistakes.

However, things changed when I moved into the research center: I began to receive credit for my work rather than how I behaved within the organization. Also, the fact that I was doing research in uncharted grounds proved to be a challenge in and of itself, which pushed me to work even harder.

Tell us about your personal efforts to become a truly admirable (female) leader. 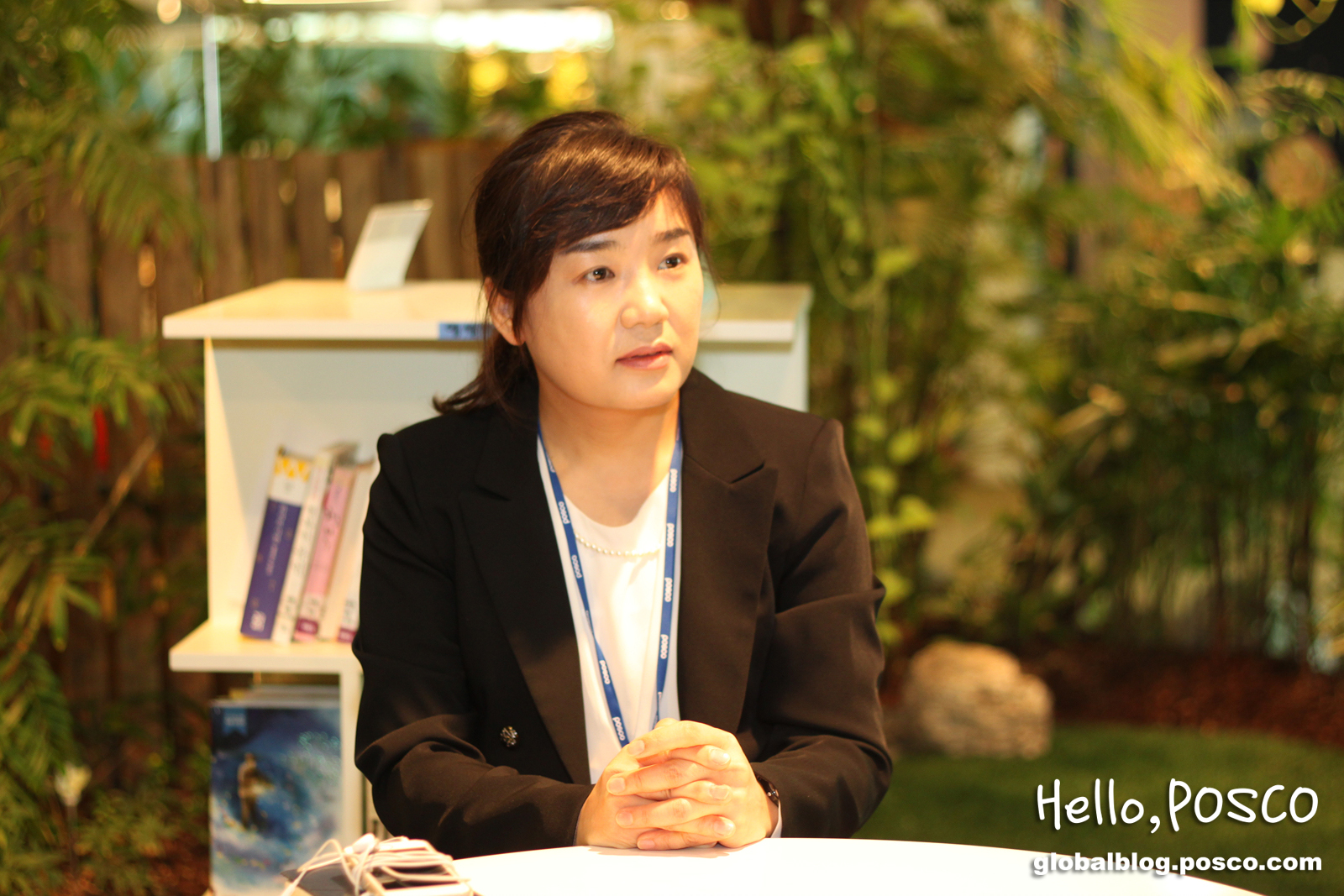 First, I think the female advantage is her “Multiplayer DNA.”

Korean females are making a constant effort to fulfill their responsibilities not only in their careers but also in their homes. Because they are exposed to an environment which requires them to carry out various tasks in limited time, they develop the ability to tackle multiple tasks simultaneously while looking at the bigger picture.

This DNA contributes enormously to workplace performance. Taking myself as an example, I ask for the help of related departments without hesitation when needed. I also do not forget to make the necessary preparations for planned objectives, all while making bold decisions when need presses.

Furthermore, I have developed the ability to assume the role of the leader and allocate appropriate tasks to my teammates even when faced with complex objectives. Also, as a researcher, I had the responsibility to provide professionalism. I think perfection in professionalism is difficult, if not impossible, to attain solo.

There is a Korean proverb that says “Goodwill is born in the shed.” It means that a full shed comes before the sharing of its contents. To me, this saying underlines the importance of the continuous effort to fill the shed. That said, I try to meet with my researcher colleagues and share ideas in order to fill the shed. Such efforts contribute enormously in shaping my ideas in the right direction.

I also try to set some of my time aside for giving advice and sharing concerns with anyone who comes to me for help. Even when I’m pressed for time, I try my best to share my resources and provide solutions!

A Step towards the Future: The Story of Lee and POSCO 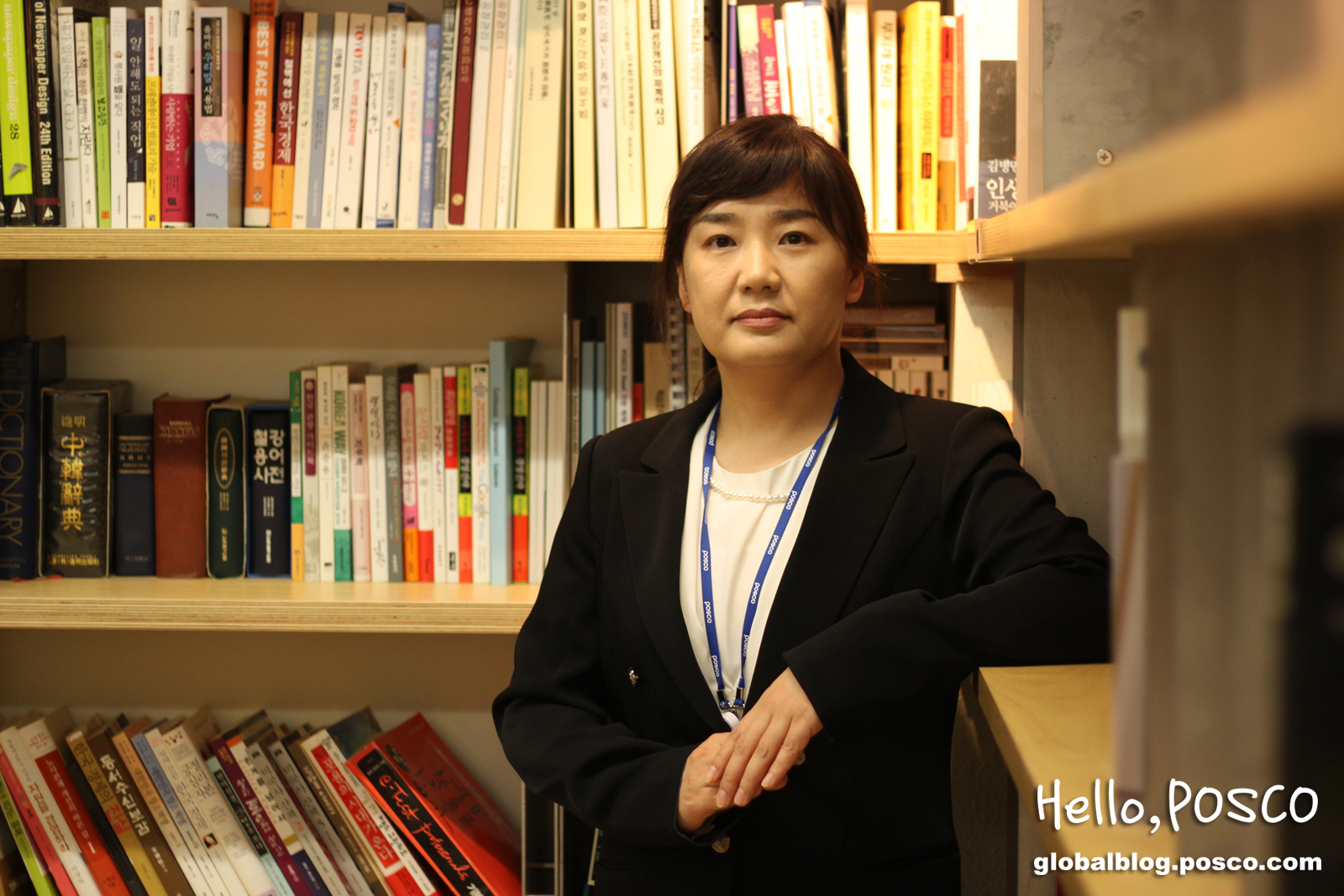 What are your five- and ten-year plans?

The question I’m asking myself these days is “what kind of leader shall I be?” With the specialty of the organization named research center, there is a certain limit to live as a position holder. I will try to become a ‘playing coach’ to secure the place as a position holder who does not lose the professionalism of a researcher.

First, I’m trying to finish my doctoral thesis by the following year. A diploma is mandatory not only internally but also externally for professional integrity. Next, I’d like to write a book on a topic of my field of expertise. I’m planning on a comprehensive summary on the steel industry-related dispute cases that were a part of my earlier publication, “The Commercial Disputes in Korean Industries.’

Furthermore, I’d like to write a series of reports on the history of the development of the global steel industry and the changing management strategies for the next generation of researchers to consult during their studies.

Could you give us any insight on the strengths of POSCO in the steel industry and the path it should take in the future?

POSCO assumes a leading role not only domestically but also in the global steel industry. It’s true that POSCO’s growth and profitability has slowed down somewhat recently, but its cost competitiveness and profit making ability remain superior to other steel manufacturers nonetheless. This indicates that POSCO’s market premium is to reckon with.

Another strength of POSCO is that it has many, many talented individuals working for the company. POSCO remains atop the “most coveted workplace” list. I expect the company’s new strategies to bear fruit over time as the promising talents of today become the leaders of tomorrow!

As a leader of the steel industry, POSCO must contribute to solving the industry’s two main issues spawned by structural problems: surplus supply and margin squeeze.

More than anything, it’s important to identify the ineffective policies and weaknesses that exist in the domestic steel industry. Joint efforts that will promote the mutual growth and development of the steel industry should be made, as well as strategies that will fortify the foundation for the growth of manufacture and demand.

Lastly, please give some advice for the females entering the workforce! 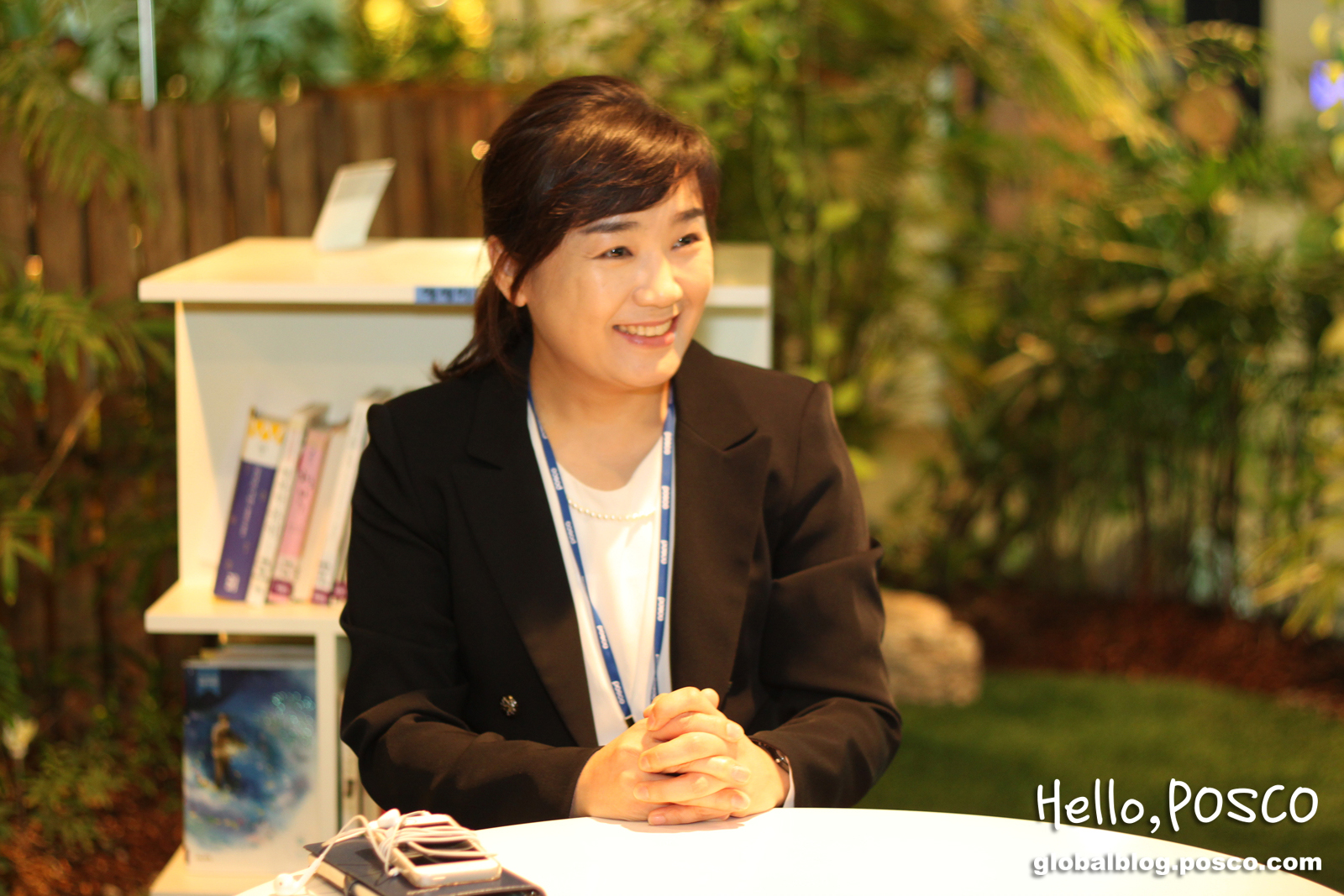 Also, try growing an interest in sports. There’s nothing like sports that leads to communication with males in a predominantly male organization. Sports is an activity that has a clear distinction between the winner and the loser, but it also gives us lessons on fairness and the need for sound strategy. Also, it will be helpful in carrying out tasks because it requires prompt decision-making from time to time. 🙂

Hope that Lee’s story will encourage you and many other business people to take a brave step in shaping their futures! Please look forward to reading our next post for the POSCO Women Leadership Series!