POSCO Taking the Lead in Discovering and Fostering Venture Companies

In compliance with the government’s quarantine policy of social distancing due to COVID-19, the event was broadcast live online with only a minimum number of people attending.

The selected ventures held a presentation at the *Change Up Ground and designed a detailed business roadmap with technical and investment advisory groups via video call. Investors and prospective entrepreneurs also participated in a Q&A session with venture companies online.
*Seoul Change Up Ground (TIPS Town S6): A public-private partnership incubator facility that POSCO opened for the first time for a private company in Seoul TIPS Town with the Ministry of SMEs and Startups (MSS) 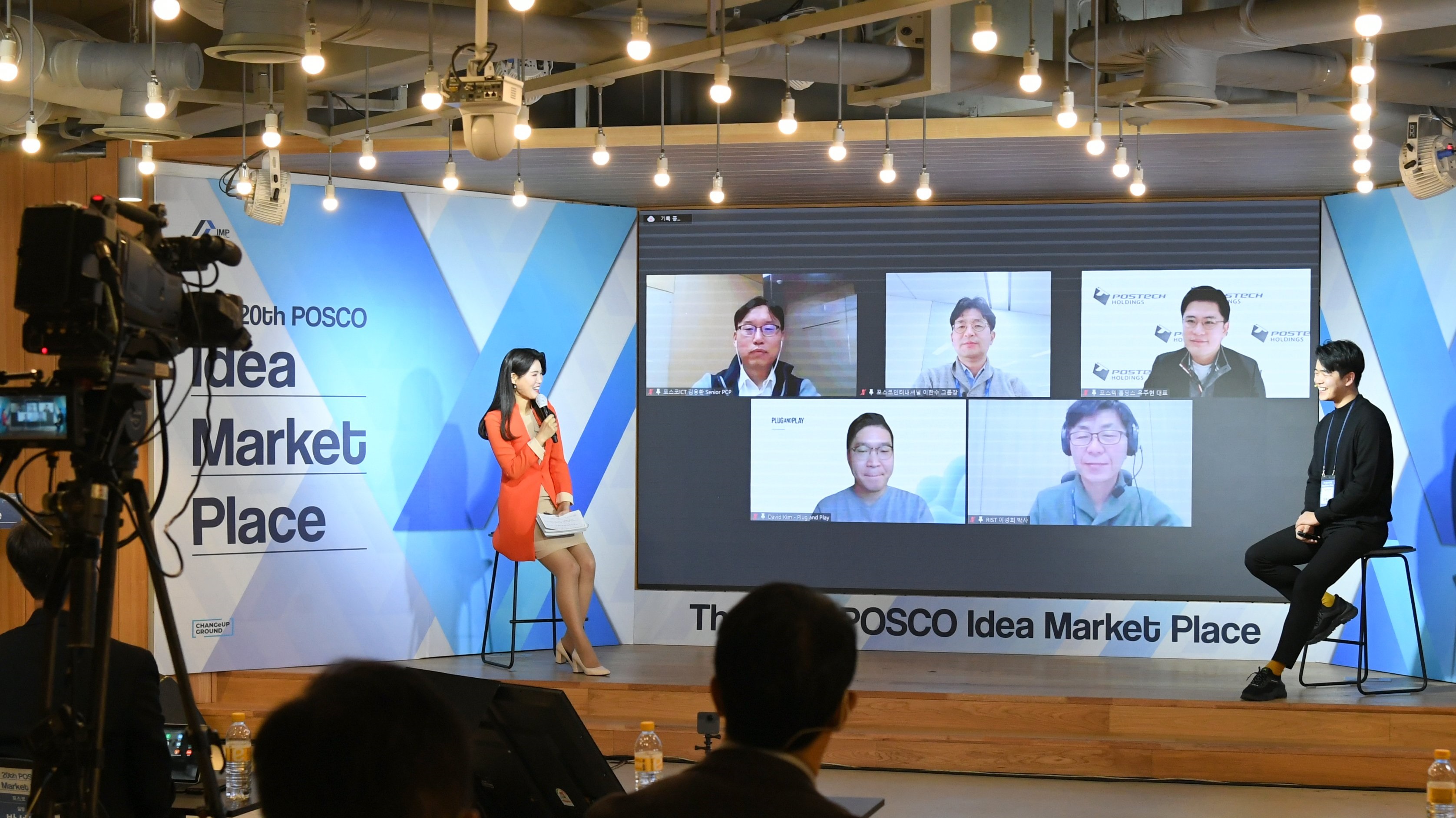 ▲ A venture selected at the IMP is giving a presentation online

Among the six venture companies selected in the fields of energy and bio, Beyond Honey Comb of “Robotic Restaurant”, where food is made and sold utilizing AI, and CorbonEn, where carbon dioxide generated in the steelmaking process, is separated and made into liquefied carbonic acid to be supplied for carbonated beverages or welding gas, received attention.

POSCO has been operating the ‘Idea Market Place,’ a program to discover and nurture startups in early stages, since 2011. For the past ten years, the company has invested 20.3 billion KRW in a total of 111 outstanding ventures. Previously, the subjects of the program were set to ventures less than 7 years, but from this year on, it has been changed to prospective entrepreneurs and promising startups of less than 3 years, as to strengthen support for venture companies in their early stages.

Also, POSCO selected six teams as the second “POVENTURES,” an in-house venture program introduced to spread a creative workplace culture and discover new growth businesses of the future. The selected in-house venture teams are incubated for a maximum of one year before the startup decision is determined. During the incubation period, they receive various benefits, such as office space, support funds for marketing, and mentoring.

Out of the 12 teams selected as the first POVENTURES, seven teams have succeeded in starting businesses within a year, showing a start-up rate higher than 50%. In November, among the first POVENTURES, POSREGEN and iOmtek received the highest award at the “K-Startup Challenge,” which was jointly held by the MSS, Ministry of Education, and Ministry of Science and ICT, in recognition of its technology and growth potential.

POSREGEN developed a product with by-products of the ferronickel smelting process that can replace cement and has been supplying it to 25 construction sites. iOmtek combines by-product slag and waste plastics to produce materials for construction and infrastructure use that can substitute asphalt or sidewalk blocks.

Meanwhile, POSCO received the “Butterfly Lamps,” which were installed by the MSS at the COEX Square in July. The lamps featuring butterflies fluttering their wings deliver the message of hope — that our small wing flaps can revitalize our economy and create a brighter tomorrow. POSCO installed the lightings in the streets of its TIPS Town on December 12 so that citizens passing through the streets can feel the comfort of their hearts as they watch the bright and dynamic wings of the butterflies.