A start to the world, CHANGeUP GROUND Pohang is now open! 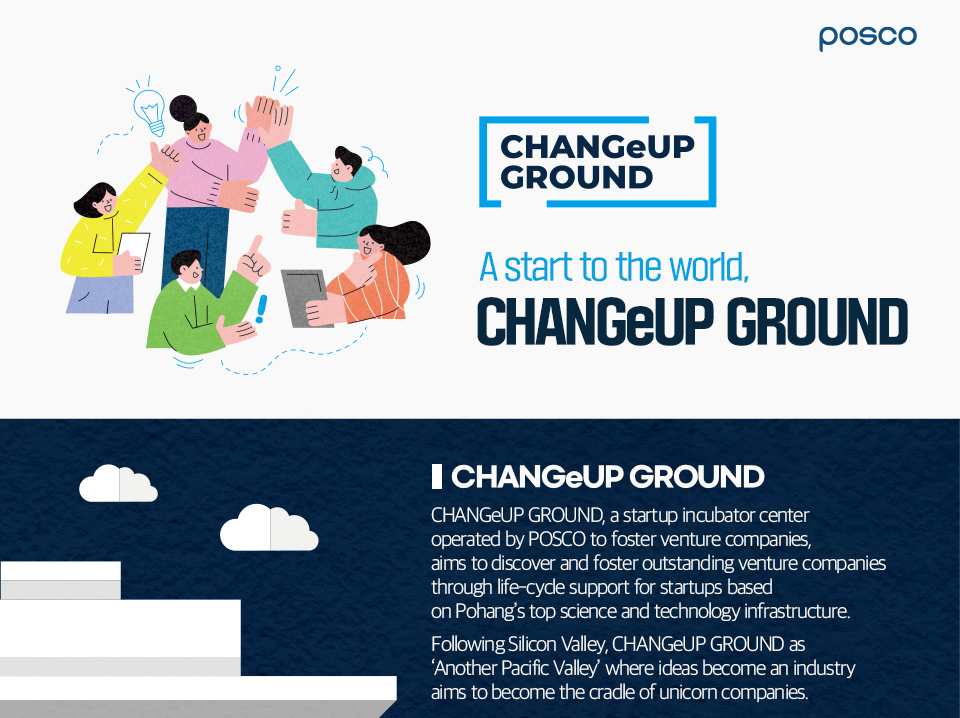 ‘A hub for startups consisting of creativity, communication, and eco-friendly space’, we call that place POSCO CHANGeUP GROUND.

POSCO launched CHANGeUP GROUND Seoul in Gangnam-gu last year. After a year, POSCO opened another CHANGeUP GROUND in Pohang in July this year. There are more than 100 companies that are preparing to move into ‘CHANGeUP GROUND Pohang’, and they also dream of becoming unicorn companies that are comparable to Silicon Valley in the United States. The business areas span a wide range of fields. It includes machinery • materials, electrical • electronic • semiconductors, information and communication • software, bio • medical, and chemical • energy • resources. It has a solid technology that is good enough to be responsible for the technological boundary between Korea and the world. Now let’s get to know the details of CHANGeUP GROUND Pohang, the beginning for Another Pacific Valley.

l Take a look at CHANGeUP GROUND with a total area of 28,000 square meters

The largest scale in the region (excluding the metropolitan area), the incubating center that connects Korea and the world, CHANGeUP GROUND Pohang!

CHANGeUP GROUND Pohang boasts a scale of seven floors above ground and one basement floor with a total area of 28,000 square meters. It offers startup companies programs that are different from existing startup programs such as research support, investment promotion, and more. It is different in size and facilities from the incubating centers for startups so far. In particular, CHANGeUP GROUND Pohang is operated on different themes and subjects on each floor. 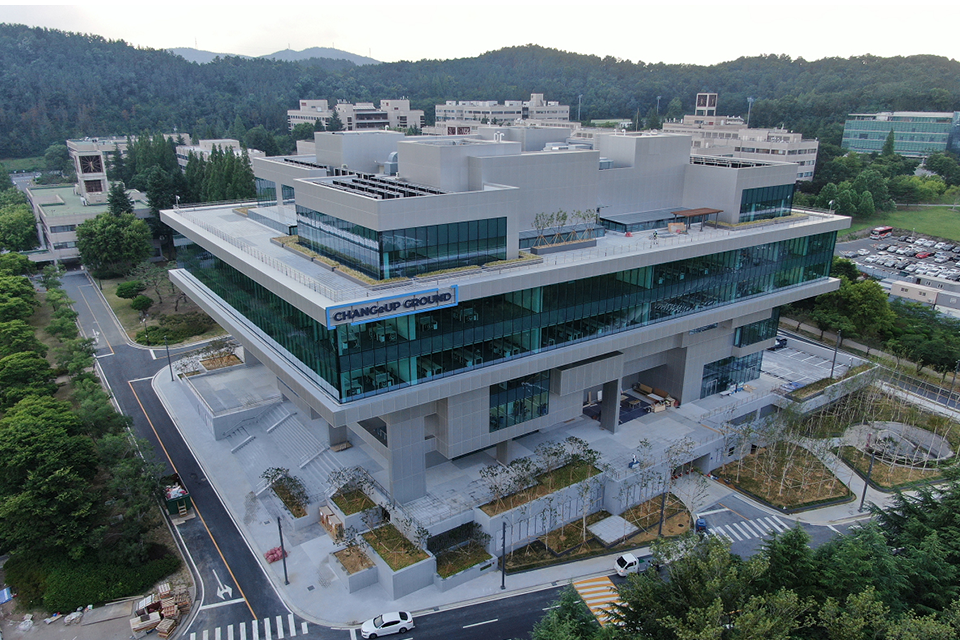 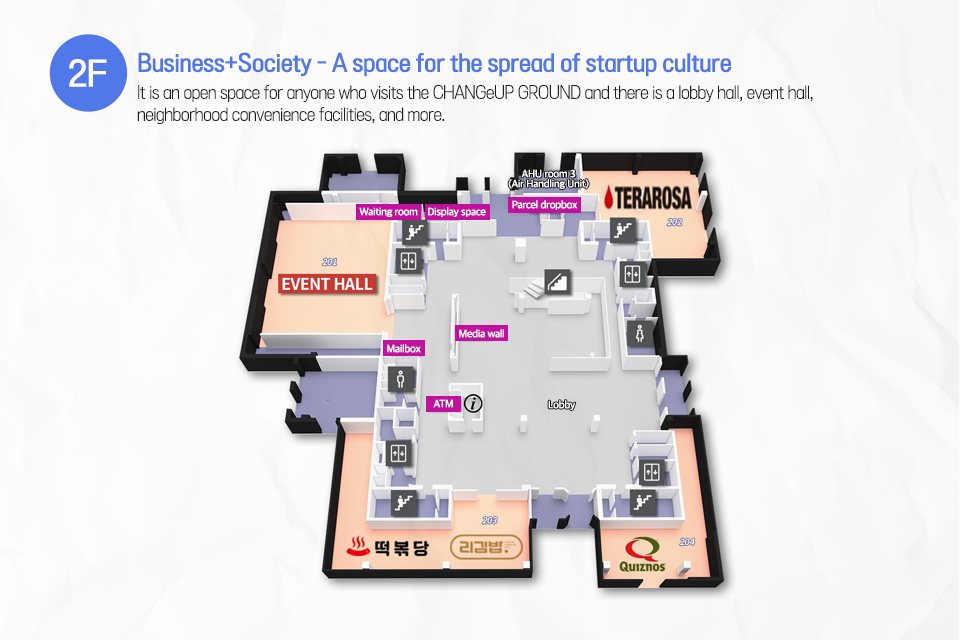 2F – ‘Society’ A space where tenant companies and citizens can enjoy the future-oriented energy of CHANGeUP GROUND Pohang together!

At the POS Archive and Gallery, the media art wall welcomes you with visuals and images suitable for the new generation and it shows the history of POSCO growing from an adventurous Pohang Works to a global company and the information about the current state of the CHANGeUP GROUND and the future startups.

In the lobby on the second floor, there is a large 8.5M wide and 9.0M long media gallery that is connected to the courtyard on the third floor, where you can check out Lee-nam Lee’s ‘CHANGeUP LIGHT’ work. The work was inspired by the light that shines on the future and the energy of the sea, which symbolizes Pohang, it shows the energy of dynamic CHANGeUP GROUND Venture Valley. 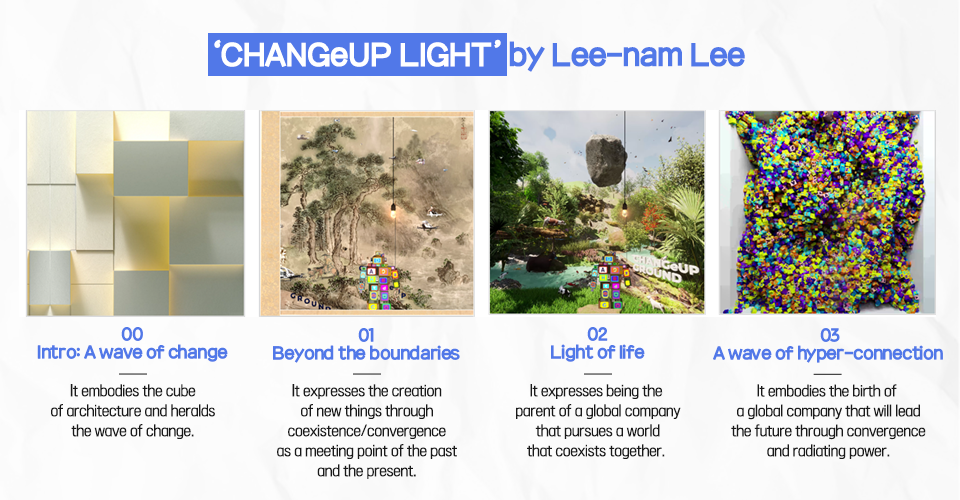 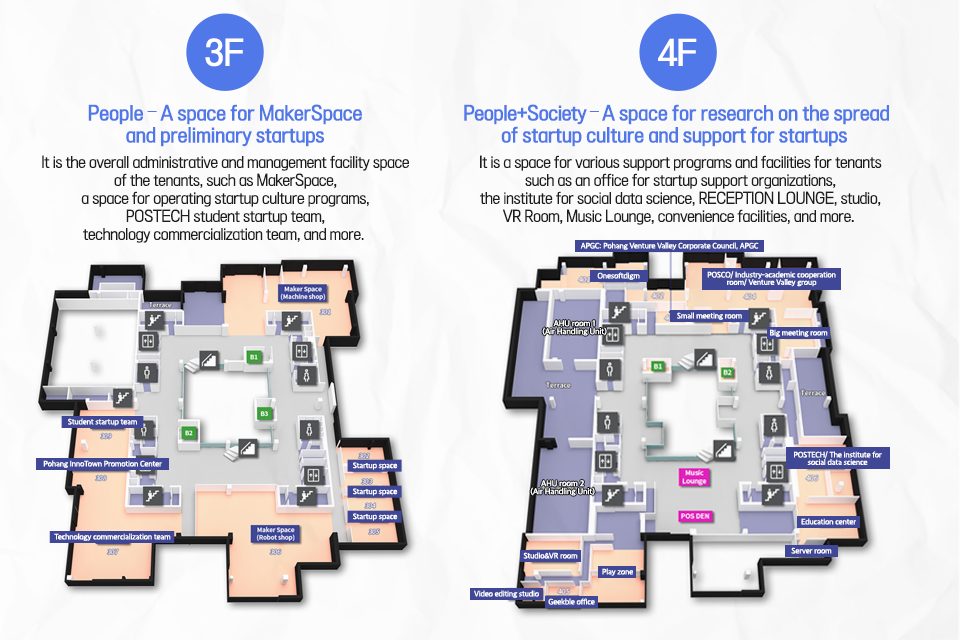 3 & 4F – ‘People’ A space that will broaden the pioneering vision through the humanistic encounter between technology and people!

The space on the third and fourth floors is a space where technology and people are connected under the theme of ‘people’. There are MakerSpace (3F) where prototypes can be produced, the institute for social data science (4F) where big data and social research meet to support a deeper understanding of people and society through big data, Music Lounge (4F), and Play Lounge (4F). In the future, deep insights to lead the paradigm of the future will be provided through this place. 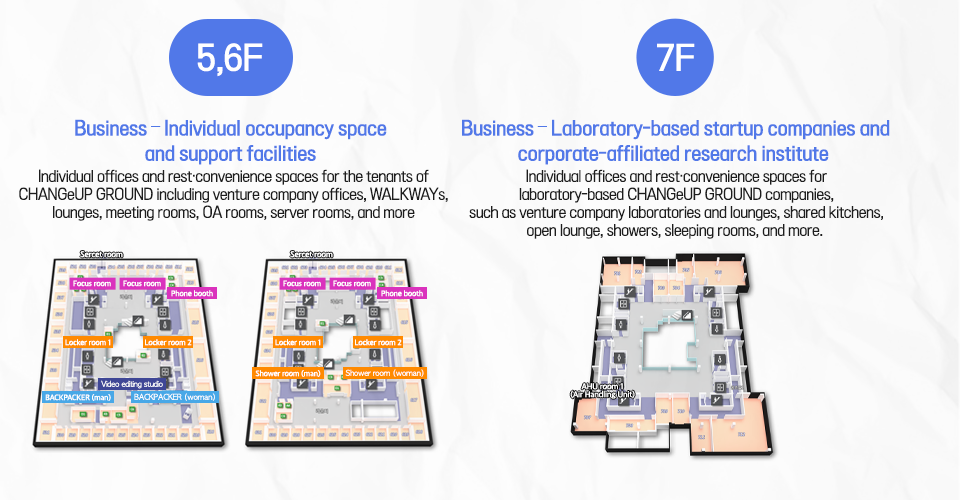 5~7F – ‘Business’ A space that will open the first page of success for startups who dream of becoming future leaders!

From the 5th to 7th floors, there are offices and meeting rooms for actual work under the theme of ‘business’. Here, the tenants will dream of becoming future unicorns and developing their leadership skills.

In particular, on the 7th floor, laboratory-based startup companies and corporate-affiliated research institutes were built. In addition to the facilities within POSTECH, separate venture company laboratories and research spaces are provided, as well as individual offices, open lounge, shared kitchens, sleeping rooms, and more rest areas are provided for the tenants.

Let’s check out the facilities by the floor of CHANGeUP GROUND Pohang more vividly through the video!

l CHANGeUP GROUND, the background of choosing Pohang as a base 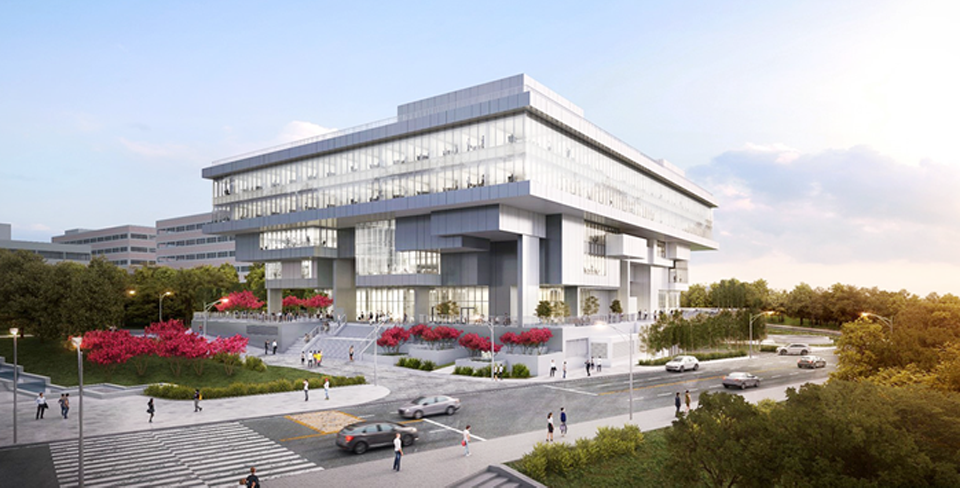 CHANGeUP GROUND Pohang will be a reliable partner for startups who dream of becoming unicorns in the future!

Given its global competitiveness first, POSCO has come to the conclusion that the location is not that important whether it is in the metropolitan area or in Pohang. POSTECH is a strong supporter of CHANGeUP GROUND in AI research that requires novel materials, new drugs, and huge data centers.
In addition, POSTECH’s accumulated research results in science and technology can be important advisors and partners in solving technical problems for tenants of CHANGeUP GROUND.

After all, it is important how much higher the thinking and technology can be connected, and it is important to go one step further and have the infrastructure that can actually be implemented. Through these concerns, it has been concluded that it is optimal to set up a base for CHANGeUP GROUND in Pohang, where POSTECH is located. Pohang is a place that can be a cluster for startups as various infrastructures are already prepared for venture incubating.

The tenant company of the CHANGeUP GROUND aims to be listed not only in Korea but also in global stock markets such as the United States and POSCO has three support systems for this purpose. 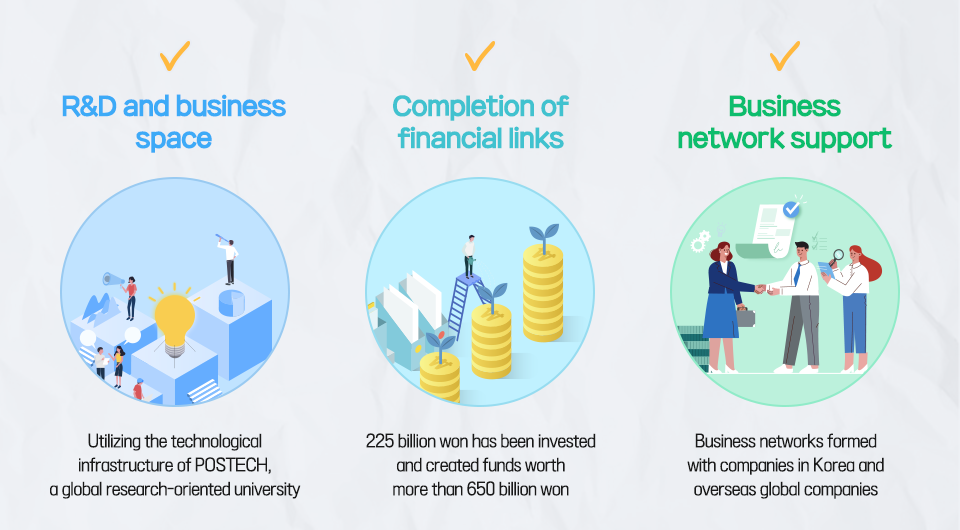 ①R&D and business space
CHANGeUP GROUND Pohang has a technological infrastructure that is hard to find in other venture incubating programs by utilizing the infrastructure of POSTECH, a world-class research-oriented university, including 3rd and 4th generation radiation accelerators. Through this, existing startup companies are overcoming the reality that they had no choice but to challenge only some modules such as developing new materials, processing big data, and artificial intelligence platforms.

② Completion of financial links
The reason why existing startups could not dream to challenge the global market was that it was not easy to secure funds. In order to provide an opportunity to attract investment in startups and to link with the company’s discovery of new growth projects, POSCO has been continuously investing in venture funds that are managed by excellent venture capitals at home and abroad since 2019. So far, it has invested 225 billion won and raised more than 650 billion won in funds and plans to continue to invest every year to expand the amount of investment.

③Business network support
CHANGeUP GROUND Seoul, which opened last year, and Pohang that opened in July this year, are forming a network of CHANGeUP GROUND regardless of location. In particular, since a startup network secured through the Idea Market Place (IMP) and a business network between domestic and foreign global companies have been formed, global-level cooperation would be possible if the startups have the technologies and business models.

The global growth of startup companies can be seen that they are responsible for the future of the country and region around the world. As Korea’s economic and cultural concentration is gradually deepening in the center of Seoul and the metropolitan area, if the connection between Pohang and Seoul is established and the foundation of the link to become a global company is laid, it will also be able to drive a new corporate growth model for Korea, not only fostering successful unicorn companies.

The reason why the CHANGeUP GROUND is taking on a global challenge under the slogan of ‘Another Pacific Valley’ is also the strong commitment to succeed by widening the gap with other regions by building a new business valley that can compete with the Silicon Valley of the United States. 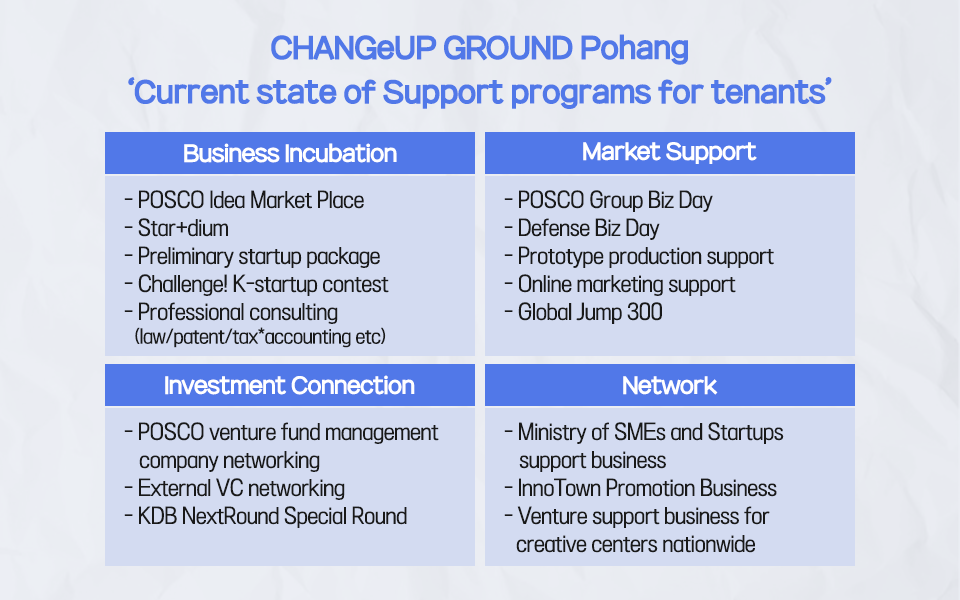 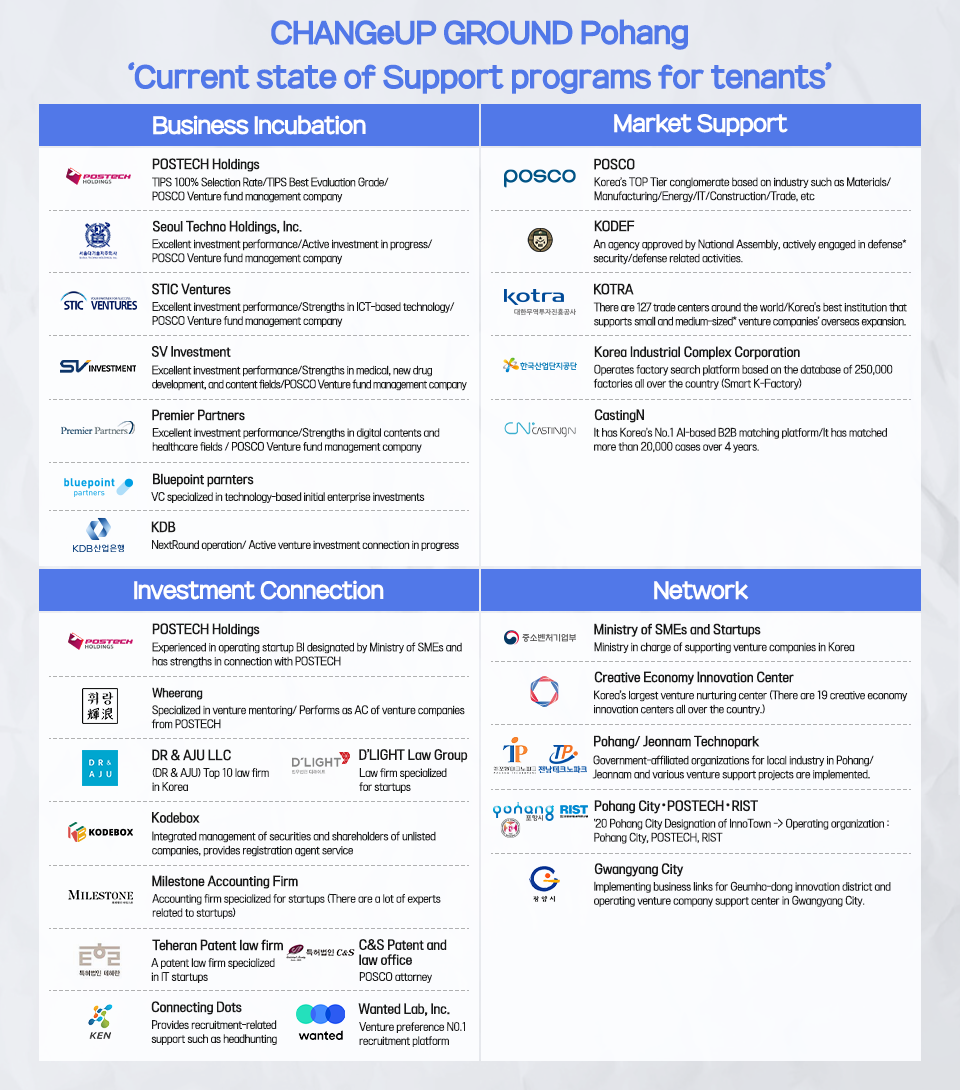 POSCO created a startup ecosystem by utilizing POSCO’s industry-academic infrastructure in the promising field with active venture investment and created a win-win future industrial domain by sensing future promising industries and supporting excellent ventures for new business candidates through venture fund operation. The key is a Venture Valley, a startup ecosystem, and a venture fund for matching and supporting capital, which is promoting growth as a sustainable platform through continuous management and relationships, and discovery and support for subsequent ventures. 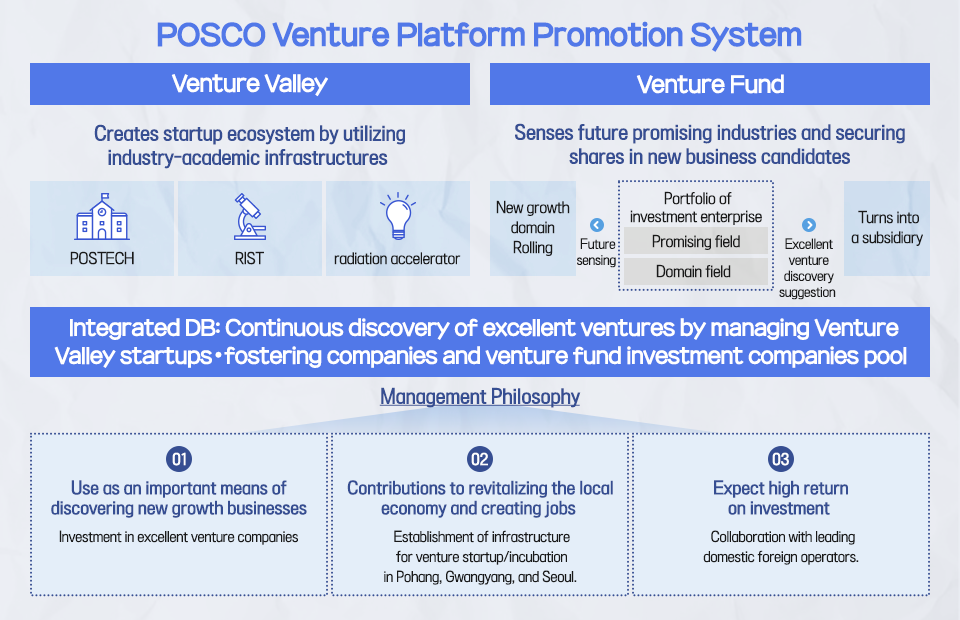 Venture Valley
Venture Valley aims to produce 100 POSTECH startups and two unicorn companies every year by 2030. It is expected that it will not only discover outstanding talents and research results and link them to startups, but also contribute to revitalizing the local economy by laying the foundation for discovering new growth engines. To this end, it is creating an environment where a new industry-academic cooperation system establishment, the opening of CHANGeUP GROUND, the establishment of the world’s best startup infrastructure, and POSCO’s Idea Market Place can cooperate in a virtuous circle system.

Venture Fund
In addition to the creation of a Venture Valley, POSCO is making efforts to find venture companies in the promising field and POSCO’s new growth strategy field through investment in venture funds. POSCO plans to operate the venture fund so that it can invest in the full-cycle of venture companies, from seed-stage startups to listed companies, secure profitability and minimize the risk of investment loss by utilizing excellent domestic and foreign operators, and reinvest the recovered funds to keep venture funds running in the long term.

In 2019, POSCO signed an MOU between POSCO – the Ministry of SMEs and Startups and Venture Business – Korean Venture Capital Association to create a cooperative foundation for the creation of venture funds. Since then, it has formed both seed/growth funds that invest in the promising field and strategy/CVC funds that invest intensively in the company’s new growth strategy fields, completing the basic framework of full-cycle investment. POSCO formed a fund worth more than 650 billion won with the approval of 225 billion won in nine funds operated by excellent domestic and foreign management companies, and has invested over 550 billion won in more than 330 domestic and foreign venture companies. POSCO plans to continue to invest in funds every year to expand its pool of excellent investment companies and contribute to strengthening the competitiveness of the group in major promotion projects and creating new growth engines through Value-up activities.

CHANGeUP GROUND, a cradle where startup companies can grow into global companies, will continue to open the doors to much more prospective tenants. Also, it will continue to cooperate and support the companies even after they grow enough to graduate from the startup stage so that they can keep challenging the world through this space. We ask for your interest and anticipation for CHANGeUP GROUND Pohang, the beginning of our dream of creating ‘Another Pacific Valley’ on the west coast, along with Silicon Valley on the east coast of the Pacific Ocean.