POSCO has signed a deal to sell a percentage of its stake in POSCO Engineering and Construction (E&C) to Saudi Arabia’s sovereign wealth fund, Public Investment Fund (PIF) to strengthen its partnership.

On September 30, POSCO and POSCO E&C sold shares owned by POSCO E&C as well as issued new shares, finalizing the deal which was first discussed in August 2014 following a letter of intent rendered by the PIF. Following this agreement, POSCO E&C retains 58.2 percent of its shares.

The deal accommodates the needs of each party. POSCO is expected to fortify its internal stability, while Saudi Arabia can rapidly respond to the changing energy markets in the post-oil era. In June of this year, after POSCO signed an agreement with PIF, Standard and Poor’s (S&P) raised POSCO’s credit rating from Better Business Bureau BBB+, Negative to BBB+, Stable. This agreement will serve as momentum for POSCO to improve the group’s entire financial health. Furthermore, POSCO E&C will improve its financial structure and achieve both transparency of management and efficiency of operation, with two directors appointed by PIF to be involved with the company’s management.

In the future, POSCO E&C and PIF will establish a joint venture, POSCO E&C SAUDI ARABIA, with an investment ratio of 4:6, respectively. By doing so, the two parties will expand their cooperative business efforts for a series of infrastructure projects including a railway, hotel and other construction projects for the Saudi Arabian government, as well as energy and plant businesses. Through this partnership, both parties are expected to enjoy gains as POSCO will see results in profitability and stability by expanding businesses in the Middle East, and the PIF will have access to POSCO’s advanced construction technologies. 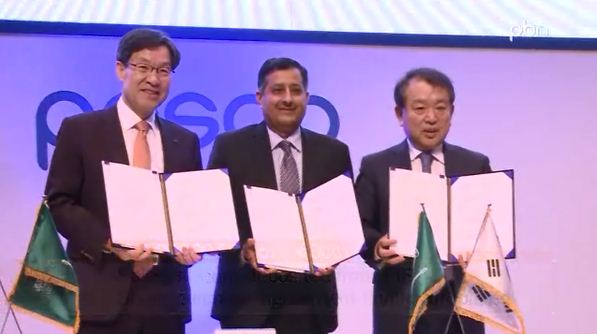