POSCO entered into a memorandum of understanding, or an MOU, with the city of Suncheon, Jeolla-namdo for the expansion of magnesium production facilities.

The MOU-signing ceremony was held on October 17 in the POSCO magnesium plate factory in the Haeryong Industrial Complex in Suncheon. Approximately 20 people were present, including National Assembly member Jeonghyeon Lee, the governor of Jeolla-namdo Nakyeon Lee, the mayor of Suncheon Choonghoon Cho and POSCO CEO Ohjoon Kwon. 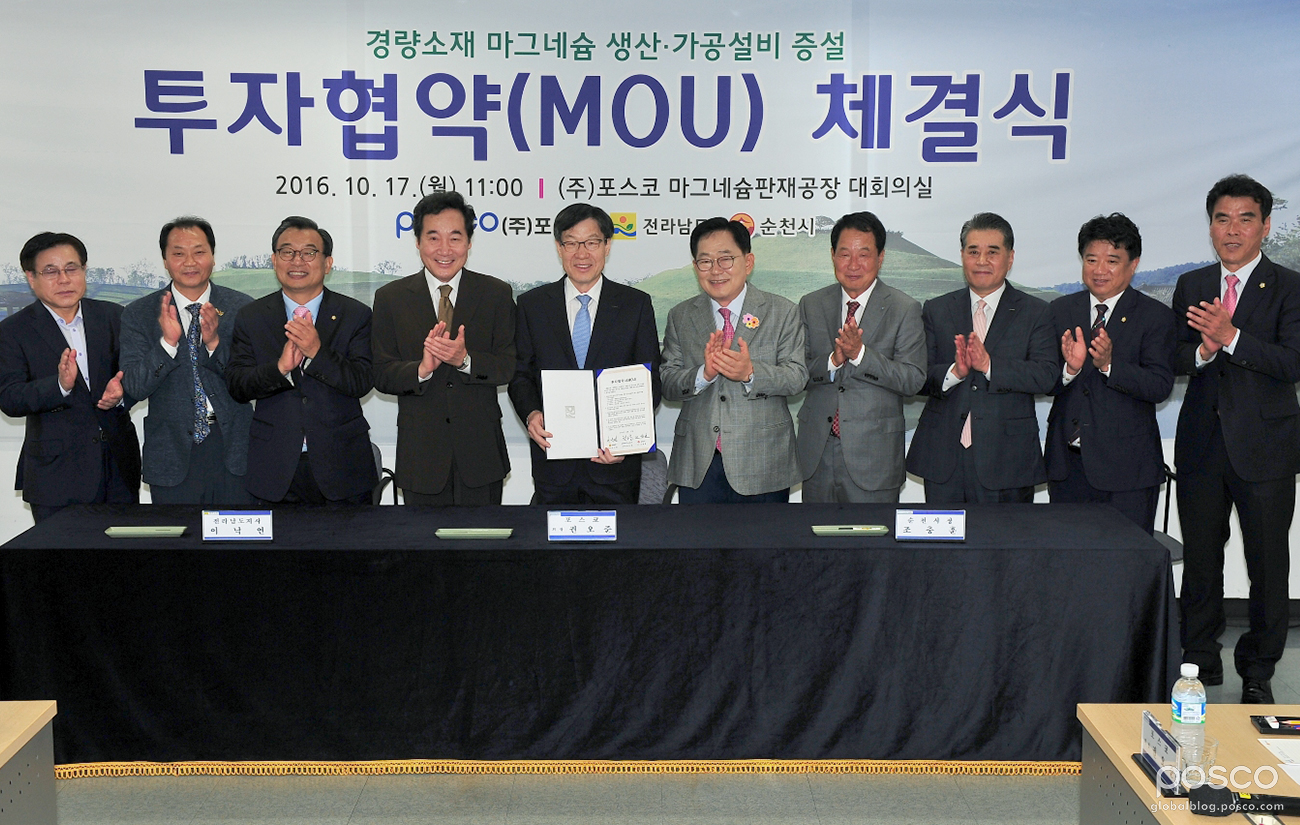 POSCO and Suncheon, Jeolla-namdo entered into an MOU on October 17 to expand the number of magnesium production facilities. Third from the left, National Assembly member Jeonghyeon Lee, governor of Jeolla-namdo Nakyeon Lee, POSCO CEO Ohjoon Kwon and the mayor of Suncheon Choonghoon Cho.

According to this MOU, POSCO and Suncheon will join forces in the purchase of a lot and the expansion of the facilities for producing automotive wide magnesium plates. They will also work side by side in transforming the Haeryong Industrial Complex into a light materials industry cluster by fostering and actively supporting magnesium-related SMEs.

Magnesium is in the spotlight as an ultra-light material that is lighter than aluminum and steel. As environment-friendly issues have emerged in the automotive industry, POSCO has focused on developments with magnesium, as it can be more effective than aluminum in terms of weight reduction. POSCO completed the magnesium plate factory in Suncheon in July 2007, and has since been producing and supplying alloy plates to domestic and overseas automakers and electronics companies.

POSCO’s magnesium was applied to Renault’s concept car ‘EOLAB,’ which was unveiled at the Paris Motor Show in October 2014. The roof of a standard car weights about 10kg, but the roof of ‘EOLAB’, which is made from POSCO’s magnesium plates, weighs about 4.5kg, and has accordingly attracted public attention.

POSCO is planning to capitalize on this expansion to preempt the anticipated increasing demand for magnesium for foreign automobiles, and become the first to make a move in the global market.