POSCO delivers its corporate vision and entity in a realistic form in print advertisement which has a rational characteristic with high information delivery functionality, while emotional images of win-win relationships and communication are the focus of TV advertisements. 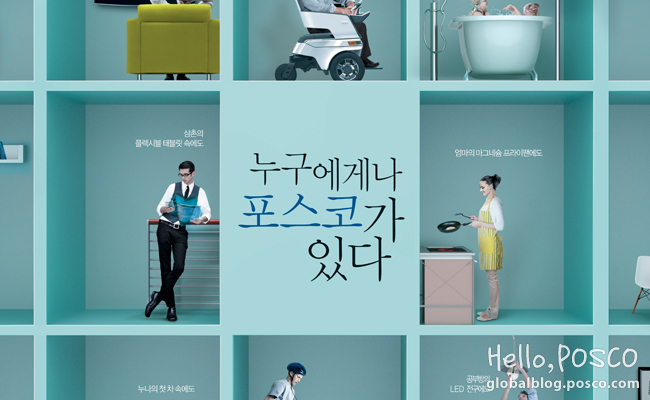 With the main catch phrase of “POSCO is with anyone,” the POSCO ‘entity’ series advertisement promotes ‘POSCO’ as a company that provides basic products in our everyday lives through the steel, material, and energy businesses, with a layout arranging selections of moments when POSCO products and technology are used within various lifestyles of all generations to generate empathy.

Vice President Eun-yeon Hwang commented, “We tried to show that POSCO is in our everyday lives: in a TV made with POSCO’s steel technology, a wheelchair made of a light magnesium material, a magnesium fry pan which is light and harmless to the body, a flexible tablet PC made of grapheme, and LED lights in the study.  I hope that the advertisement which tells the success story of POSCO as a comprehensive material company can generate empathy from many people.”

Meanwhile, POSCO, which has been recognized as a reliable company serving a pivotal role in the nation’s economic development since establishment, started advertisement communication activities to generate an intimate corporate image starting in the year 2000.

The ‘Without Steel’ campaign was the start of public advertisement communication themed with the usability of steel in everyday life, which was followed by continuous advertising campaigns focusing on win-win relationships and communication as main themes to heighten the images of corporate reliability and friendliness.