TIPS (Tech Incubator Program for Startup Korea) Town is a Korean version of Silicon Valley, that the Ministry of SMEs and Startups (MSS) has been constructing in Seoul since 2015. MSS is operating the areas Street S1 to S4, while Gangnam-gu Office runs S5. On this occasion, POSCO became the first private company to cooperate with MSS and opened S6.

POSCO named TIPS Town S6 as “Change Up Ground.” The incubator facilities would change the future of startups and act as a ground to upgrade their business.

Around 30 people attended the inauguration ceremony, including Young-sun Park, the Minister of SMEs and Startups, Jeong-Woo Choi, CEO of POSCO, Hak-Young Lee, the Chairman of the Trade, Industry, Energy, SMEs, and Startups Committee, Young-Ha Ko, the Chairman of Korea Business Angels Association, and representatives of occupying companies. 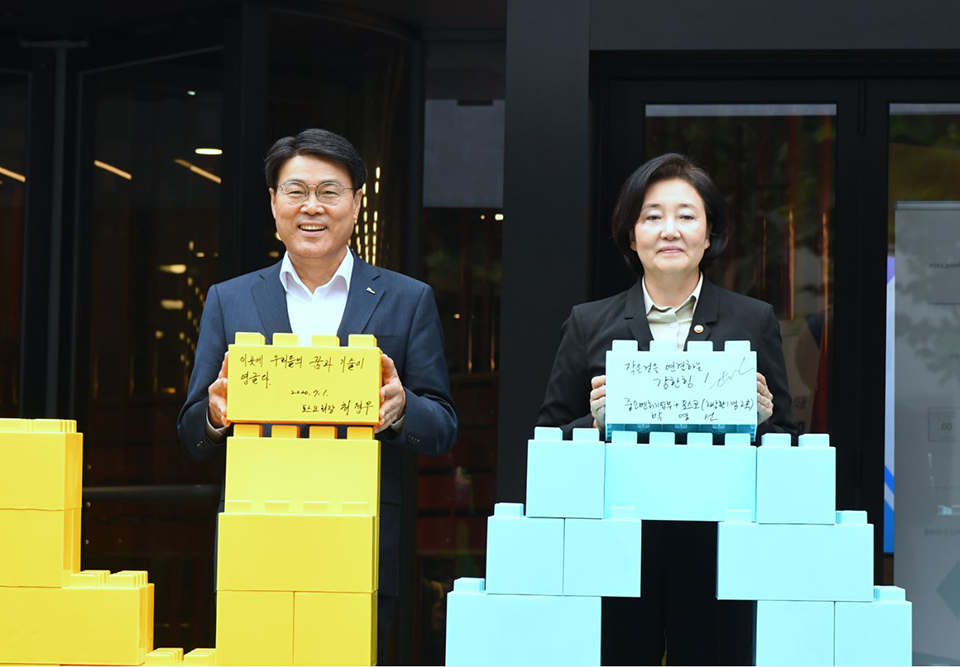 CEO Jeong-Woo Choi stated, “We hope that Change Up Ground will become a reliable partner for many venture companies that engage in their challenges ahead. POSCO will make efforts to revitalize the startup ecosystem by establishing the POSCO venture platform.”

Young-sun Park, Minister of SMEs and Startups, said, “I hope that many more startups will innovate the country’s economic ecosystem with passion and enthusiasm.”

Change Up Ground is composed of seven floors (B1~6) with a total ground area of 4,200㎡ and currently houses 28 startups in various fields that include bio, materials, and AI. For the first time in TIPS Town, it has a studio where the startups can easily create video contents. Using the facility, the occupants will be able to promote their companies in video format on new media much more easily. Also, the Seminar Room on the basement floor and the Event Hall on the first floor serve as a space for education, IR, and networking events for startups. Each floor of the building is equipped with video conference rooms and phone booths that fulfill the various needs of occupants.

POSCO also utilized products developed by ventures while creating the incubator space. To heighten the security at the entrance, the company applied a blockchain-based untact entry system built by venture company ICONLOOP Inc. Eco-friendly blocks crafted by Posphalt, POSCO’s in-house venture, with slag, a by-product of steelworks, were used as interior decoration in the rooftop lounge.

POSCO intends to further create a startup infrastructure in Pohang and Gwangyang as well to enable startups and venture companies to closely cooperate in conducting research, inducing investment, and interchanging technologies. Through the action, POSCO pledges to spearhead the vitalization of the local economy and venture ecosystem, and job-creating for youths.

POSCO held the 19th Idea Market Place (IMP), a program that offers a growth opportunity for startups. Previously, venture companies who had been shortlisted by POSCO presented their business plans at the event, and decisions regarding investment were made later on. However, starting from this year, nine finalists were selected with decisions on investment already complete in advance.

The selected nine venture companies exhibited their prototype products and presented their business plans at the event. They will also be provided with continuous commercializing training, mentoring, and follow-up investment. Applications for the 20th Idea Market Place are open on the official website of IMP (www.poscoimp.com).

※ Announcement for the 20th Idea Market Place
– Application to be handed in from June 8 to July 10 18:00 http://www.poscoimp.com/