On May 21, POSCO hosted the 17th Idea Market Place (IMP), a unique program that offers a nurturing growth opportunity for startups. POSCO has been hosting this bi-annual event since 2011 discovering 173 distinguished startups thus far – 87 of which the company made direct investments of 14.2 billion KRW.

TENELEVEN, a software development company, came in the top amongst the 16 shortlisted contenders. POSCO Newsroom sat down with the CEO of TENELEVEN and discussed the company’s journey through the process. 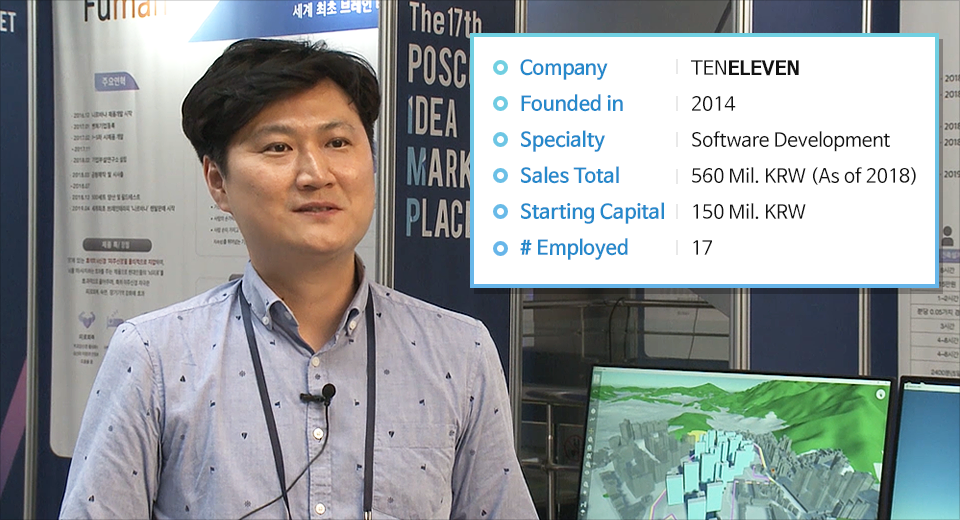 ▲ Ho-Young Lee, the CEO of TENELEVEN – the Best Startup of the 17th Idea Market Place

l “We Failed Twice, but Giving up Was Not an Option.”

Q: Congratulations for coming in the top at the 17th Idea Market Place. Please tell us a little bit about yourself, and your company, TENELEVEN.
A: Thank you. My name is Ho-Young Lee – at TENELEVEN, we are currently developing “BUILDIT” an artificial intelligence (AI) design service for architecture. I started the company with two colleagues in 2014 when mobile games were booming. We were determined to succeed and created a mobile game using the hydrodynamics theory. We built a physics engine to create the game, but it wasn’t very well received. After the initial failure, we managed to hold on by taking on various consulting projects. It was during this period I came up with a business idea on creating an automated building space distribution with optimal floor space and good amount of sunlight. That’s how the BUILDIT came about.

Q: What prompted you to participate in this year’s IMP?
A: Actually, this is our third try. TENELEVEN didn’t even make the initial cut for the first two tries. This time, when we made it through the initial process, that in itself was quite an achievement. After that, I was delighted to receive positive feedback at the presentation right before the IMP event, and even more when we were declared the final winner. I spent months fine-tuning the program, and going over the business models over and over with my mentor – the mentoring session was immensely helpful in processing how the technology can be applied. Giving up was not an option and I am extremely happy to finally see some results.

Q: What does TENELEVEN specialize in?
A: A good place to start would be ‘BUILDIT CLOUD’ and ‘BUILDIT PRO’. BUILDIT CLOUD is an architectural AI that helps to produce layouts with maximum floor space, number of households, and amount of sunlight. The cloud service allows the users to access it anytime anywhere with an internet connection. The calculated results can be printed in various report forms and data – be it CAD drawings, amount of sunlight per household, estimated construction costs, floor space ratio, etc. BUILDIT allows users to review business feasibility and help them make effective decisions in a timely manner.

Q: What about BUILDIT PRO? What does it do?
A: BUILDIT PRO is a tool that edits the results derived from BUILDIT CLOUD. With BUILDIT PRO, you can modify and switch the locations of a building, floors in three-dimension. Rotating function is also built in. It even takes legal details like building codes into consideration. It also visualizes actual building and terrains, allowing users to see the potential views and the scopes of sunlight and shadow coming from the neighboring buildings.

While developing BUILDIT, I needed expert background knowledge in architecture, geography, computer science as well as urban planning. I think the technical barriers might be quiet high for those getting introduced to the BUILDIT because it utilizes the Big Data, artificial intelligence and AR/VR on top of architectural design. The IT experts at TENELEVEN come from diverse backgrounds, and I think that’s one of our strengths.

Q: What projects have you worked on using BUILDIT?
A: We participated in an urban redevelopment project in Seoul’s Bulgwang area. Using BUILDIT, we came up with 700 design plans, finally settling on a plan with optimal floor space and sunlight. The clients’ biggest concern was to come up with the best number of households for the buildings. We were able to offer the best number for them – 100 more households compared to other contenders, and that’s how we got selected. The sale price for each housing unit is roughly 300 million, which means we ended up creating economic values of 30 billion KRW by coming up with that number 100.

Q: Finally, a word on where the TENELEVEN is headed to next.
A: I’m imagining a future like Katerra, a US-based design and technology construction startup. They are bringing innovations to improve and rid of inefficient processes in architecture. Eventually, I would like to branch out beyond architectural design – we want to grow to become a construction tech company optimizing not just the design but the entire processes involved in design and construction. We think the pre-fab construction is especially compatible with AI technology, so we are planning to build modular buildings using pre-fabs.

Since the foundation of TENELEVEN in 2014, the company has been tirelessly running towards their goal. With the IMP, CEO Ho-Young Lee for whom giving-up was simply not an option even in the face of many failures, produced a valuable result. With Lee’s dedication and persistence, TENELEVEN’s technology is likely to create positive impacts for POSCO and for Korea.