The POSCO TJ Park Foundation held its 2017 award ceremony at the POSCO Center on March 29 to recognize excellence in science, education, community development, and technology. The POSCO TJ Park Prize was established in 2006 in honor of the late chairman and founder of POSCO, Tae-joon Park. Park laid the groundwork for the industrialization and modernization of Korea and contributed to the economic & industrial development of Korea by encouraging the general public to adopt POSCO’s founding principles of creativity, talent development, sacrifice and volunteerism. The foundation celebrates its 11th anniversary this year.

This year, the POSCO TJ Park Prize was awarded to the following honorees: 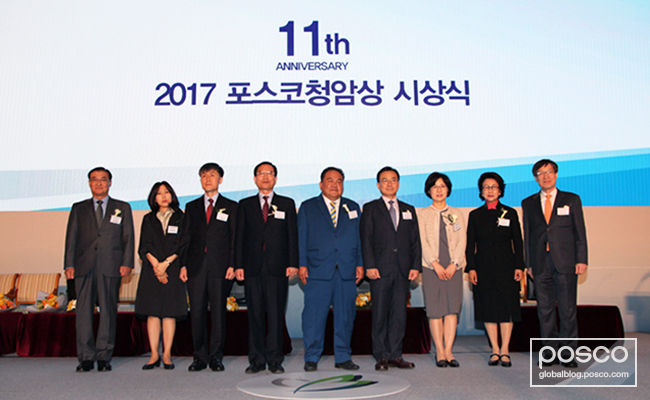 The Excellence in Technology award was added this year to highlight how technology has contributed to the renewal of the Korean economy. Eligible candidates for this category include persons or organizations that contributed to national and global market development.

Prof. Jong-heun Lee of Korea University, winner of the TJ Park Science prize, was honored for his work on the oxide nano hierarchical structure in which nano building blocks are regularly self-assembled, and the p-type oxide semiconductor, which has a high level of catalytic activity that allows for gases to be detected quickly and selectively. His achievements are expected to be widely utilized in various areas such as safety, environment, medical science, and IoT.

Kyungpook National University Attached Middle School, winner of the Excellence in Education prize, was awarded for its model of creative public education. Unlike a typical learning environment, the middle school introduced project-based learning in 2012, which allowed students to switch roles with teachers and also collaborate with one another on a deeper level.

Jimmy Pham, winner of the Excellence in Community Development and Philanthropy prize, established KOTO (Know One, Teach One), the first social enterprise in Vietnam. For 17 years, the organization has been giving at-risk youth a chance to stand on their own by teaching various life-skill classes.

Myung-hwan Kim, head of the Battery Research Institute at LG Chem, received the foundation’s very first Excellence in Technology prize. Kim began to oversee battery R&D in 1996 when the secondary battery business was first starting to become active. Through much trial and error and over 20 years of experience in the field, Kim successfully developed the first lithium-ion battery for electric vehicles. He is considered to have greatly contributed to making Korea a leader in the secondary battery industry.

Chang-hee Kang, former chairman of the National Assembly, delivered a congratulatory address, saying, “I would like to thank POSCO for contributing not only to the development of science and technology, but also for actively recognizing scholars and citizens who made a great impact in their respective fields.”