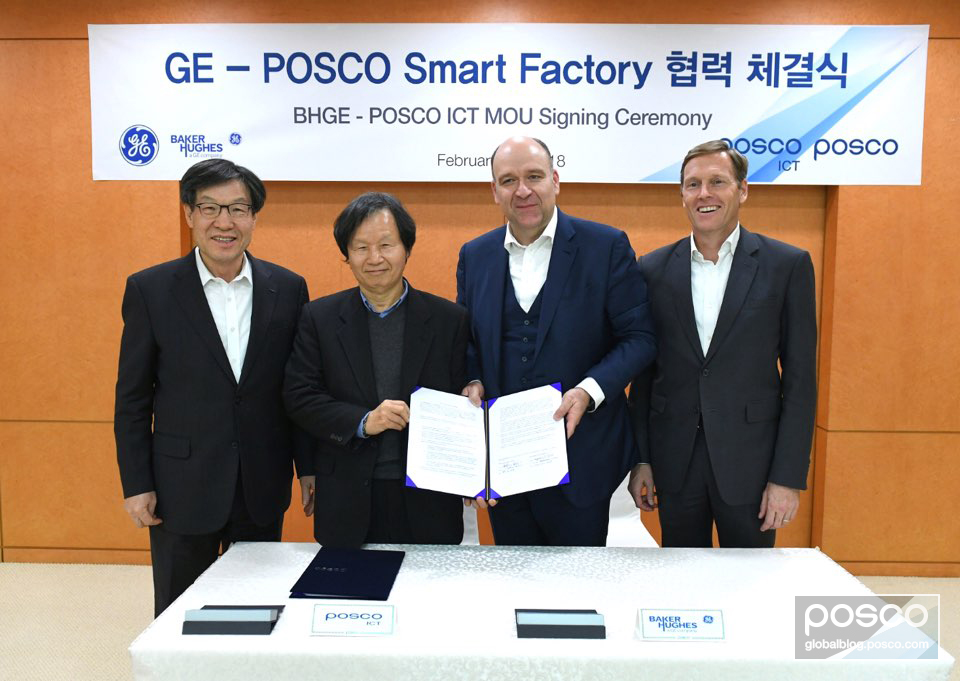 POSCO’s PosFrame is specialized for the steel industry, capable of collecting all information from the production process for analysis and visualization. GE’s APM can increase the operation speed and stability with early warnings and failure predictions based on collected data.

POSCO and GE will apply GE’s APM solution to POSCO’s power generator No. 5 at Pohang Steelworks to test APM’s compatibility with the existing PosFrame, and to develop modules and verify the system’s adaptability. Once the companies finish developing the hybrid platform, PosFrame+, which predicts failures in steel facilities by combining PosFrame and APM, it will be a groundbreaking turning point for smart factory platforms.

During the signing ceremony, CEO Kwon said, “The development of smart technology for steel facilities will give momentum to the commercialization of smart solutions in the global market.”

Chief Digital Officer of BHGE, Matthias L. Heilmann stated, “Both companies will create opportunities in all areas by sharing visions and cooperating closely for the acceleration of digital transition of the steel industry.”

Both companies plan to develop PosFrame+ for steel facilities and related industries, and will also create cooperative models for the global commercialization of PosFrame+ by sharing research cases and primary technologies for smart factories.\

All information collected from the production process can be analyzed automatically to increase the operation rate and stability. Facilities with APM will be equipped with early warnings through malfunction predictions and will be able to minimize maintenance costs and failure risks. A classic example of a successful application case is the “Lazarus project” which revived a combined power plant in Chivasso, Italy. Its operations stopped in 2013 due to the facility’s inefficiency, but after applying APM, the facility was able to revive its efficiency and the restarted operations after two years.