On March 22, POSCO and ExxonMobil reached an agreement to mass-produce high manganese steel and apply it to slurry pipes – the first time that manganese steel has been used in this capacity. Manganese steel is high in strength and formability, making it an ideal material to protect against the wear that frequently occurs when slurry, a mixture of oil, water, and sand, travels through pipes. 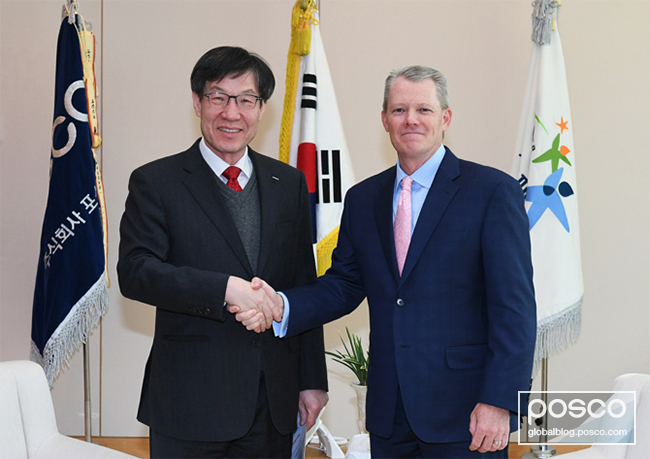 ExxonMobil, the world’s largest oil company, upholds strict standards when choosing materials, and for the last five years has been working with POSCO to manufacture and test slurry pipes at worksites. Last year, a 1.2 m long slurry pipe – made with POSCO’s high manganese steel – was installed at ExxonMobil’s Kearl Oil Sands Project in Canada. It demonstrated a resistance to wear five times higher than conventional materials.

POSCO and ExxonMobil employees pose for a commemorative photo shoot after inking a high manganese steel supply contract at the POSCO Center.

In response to president Schuessler, CEO Kwon suggested furthering their partnership by utilizing high manganese steel in various other businesses within the oil sands industry.

POSCO also plans to use its high manganese steel in the making of heavy construction and bulletproof military equipment as well as steel pipes and facilities to move various minerals including oil sand slurry.