On 2nd April, Chung Joon-yang, chief executive officer of POSCO, and Eric Schmidt, chief executive chairman of Google, gathered around their respective video conference rooms at POSCO Center in Seoul and Mountain View in California. In the meeting, two business tycoons shared substantial outcomes since the MOU was signed for strategic partnership in 2011 and agreed to develop a close tie for generating continuous developments. 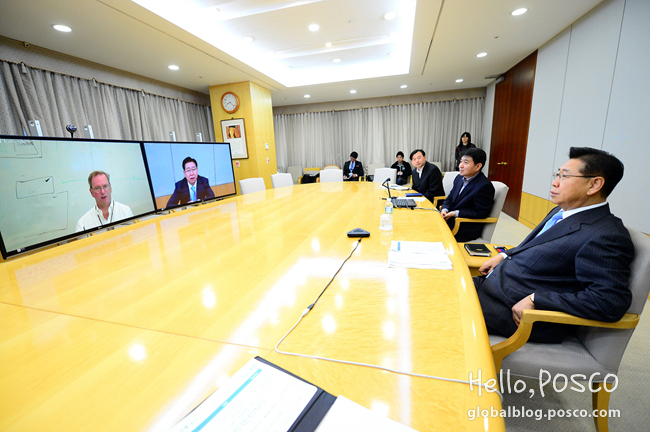 It was their second encounter since CEO Chung had visited Google’s headquarters in April, 2012. Through using ‘Hangouts,’ a video conference solution by Google, the meeting was held for about half an hour. During the smartly held meeting, Mr. Chung said “POSCO’s Smart Workplace (SWP) is shifting the way POSCO operates and its corporate culture to a great extent. This revolutionary platform, with speed, openness and information technologies from cutting-edge corporates such as Google, is being fused with POSCO’s unique corporate culture.” Chairman Schmidt replied by saying “The momentum POSCO has shown for these changes is very surprising.”

POSCO’s SWP consists of communication and cooperative work solutions via Google’s Gmail, Google+, Google Search and other tools. Since the launch, there has been monthly average of 14,000 transmissions of exchanging knowledge and ideas amongst POSCO’s employees. Also, costs for off-line meetings and reports have been cut down by about 30 percent given the online working solution. The times spent for decision-making procedures illustrated a 63 percent reduction per day with the mobile office environment having no time and space limitations.

Since SWP was introduced POSCO employees have been able to engage their tasks through smartphones or PCs in real time at wherever they may be. As the figures show above, business decisions can now be determined much faster than before as SWP provides quicker communication and cooperation. Notably, a knowledge share system has been constructed to allow POSCO’s entire staff around the globe to inquire, search, access and compile information on specific issues. The system is designed to maximize POSCO’s collective intelligence to synergize its operations and productivity.

POSCO is planning to provide ‘know-hows’ of constructing SWP environment for its mutual investment companies by the end of 2013. In collaboration with Google, the new, revolutionary culture will be broadly shared with every POSCO employees. Keep watching out for the future POSCO and Google are making.