One of the Best Places to Work for Women

Have you stereotyped steelmaking corporations as being manly and rough?

If you have, think again!

POSCO, Korea’s largest steelmaker, has been making great efforts to be one of the best places to work for women. It may come as a bit of a surprise to those of you who may have thought the steel industry was a “boys-only” club, but POSCO is actually leading efforts to improve policies for supporting women employees and being a family-friendly place to work. Let’s explore the ways POSCO does this.

POSCO have been increasing the ratio of women hires every year. In fact, since 2008, there has annually been a 10% increase in women staff.

To making life easier for working moms, POSCO has many offerings such as childcare centers within the office and mentoring programs. These programs have been put in place to make work life balance easier and also to make career advancements possible without having to give up family.

Women employees at POSCO can use ‘childcare leave’ for two years (one year legally guaranteed, plus one additional year). They can also request for flexible office hours to only work 15-30 hours per week. POSCO has made it clear that maternity leave will not negatively affect promotion opportunities or performance rating.

Furthermore, since 2006, POSCO has created childcare centers in offices at Pohang, Gwangyang and Seoul, in order to support employees with children. POSCO has continuously expanded capacities for childcare centers as demand grew. The facilities have helped POSCO employees not be held back on family planning by creating a space at work for working mothers to take a break and also care for children during the daytime while on the job.

POSCO solution 2: Created programs to help promote vision for women and advancement in the workplace 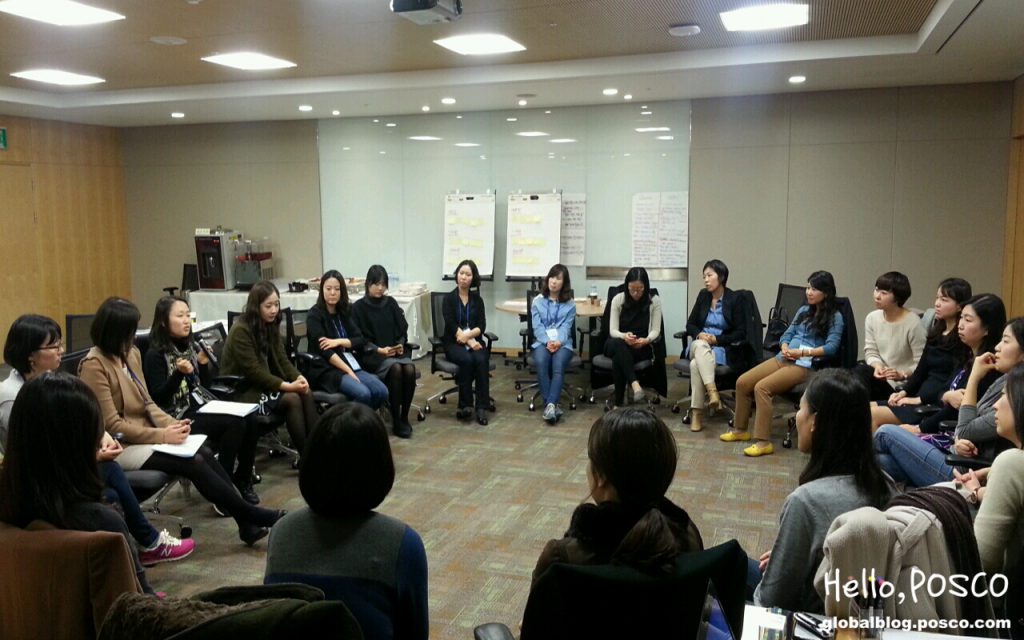 Pictured here: W-Leadership program started in 2013 to create a space where women can discuss leadership tips and career advancement issues

POSCO is operating various mentoring programs to promote the advancement of women in the workplace.

From 2011, POSCO has launched a ‘Women’s Mentoring Day’ held during lunch. This program includes lectures and discussions on topics such as ‘work-home balance’, ‘career development for women’ and ‘leadership coaching’. The ‘W-Leadership program’ launched in 2013 so that women employees could come together to discuss shared issues that they face such as career advancement dilemmas when it comes to leadership roles, childcare and career development. 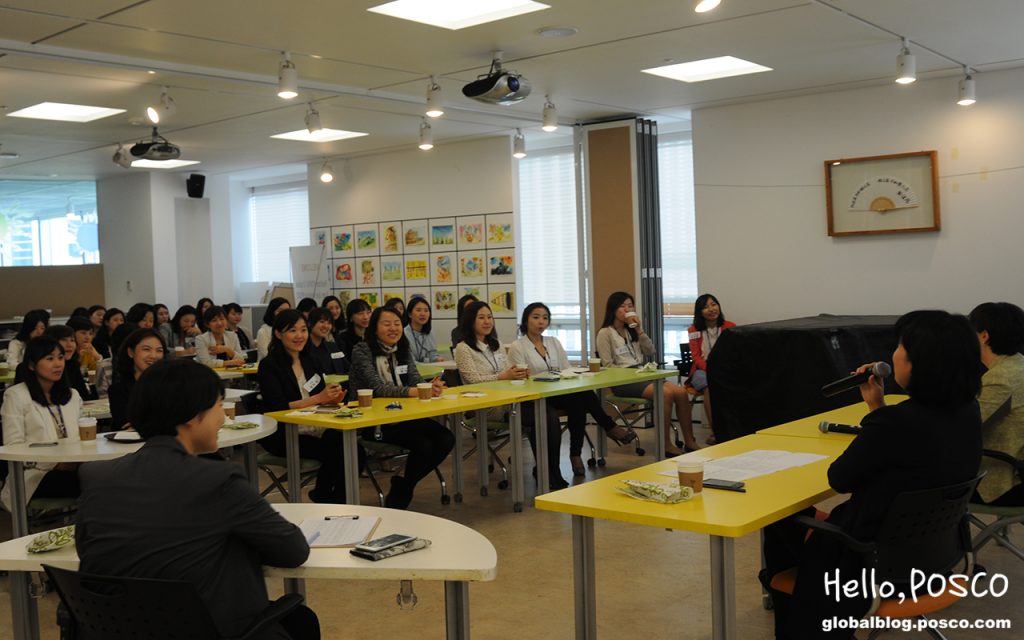 Pictured here: Workshop for women employees to come together to network and share information for career development

POSCO promotes work life balance by providing environments that are beneficial to the entire family. 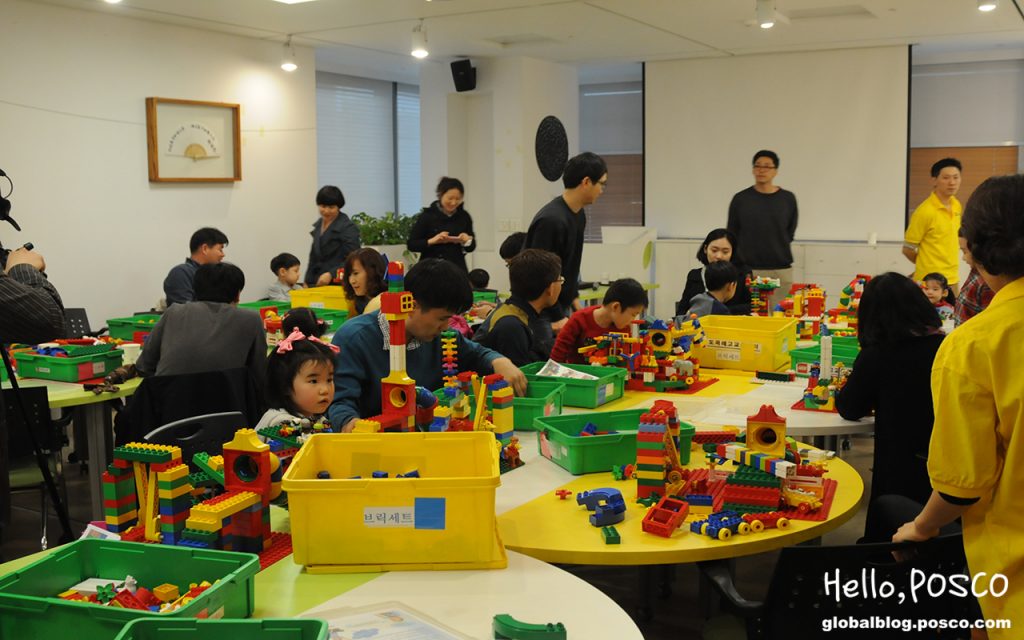 For working moms that cannot spend as much time with family as they want, POSCO has launched family weekend programs called “POREKA” since 2012 where external instructors come to teach programs such as art, classic music and art therapy.

In addition, in case of family sickness or accidents, POSCO allows employees up to 90 days of “Family-related leave”. For these efforts and more, POSCO has been recognized as a family-friendly company in 2011 and acknowledged by the Ministry of Gender Equality.

POSCO has proactively created opportunities for women who may have had a lapse in their career due to childbirth, childcare and housework. In 2007, POSCO was the first major conglomerate to hire married women as entry level employees. Since then, POSCO has continued to open up opportunities for married women and is making efforts to create a happy workplace that allows women to pursue career development. 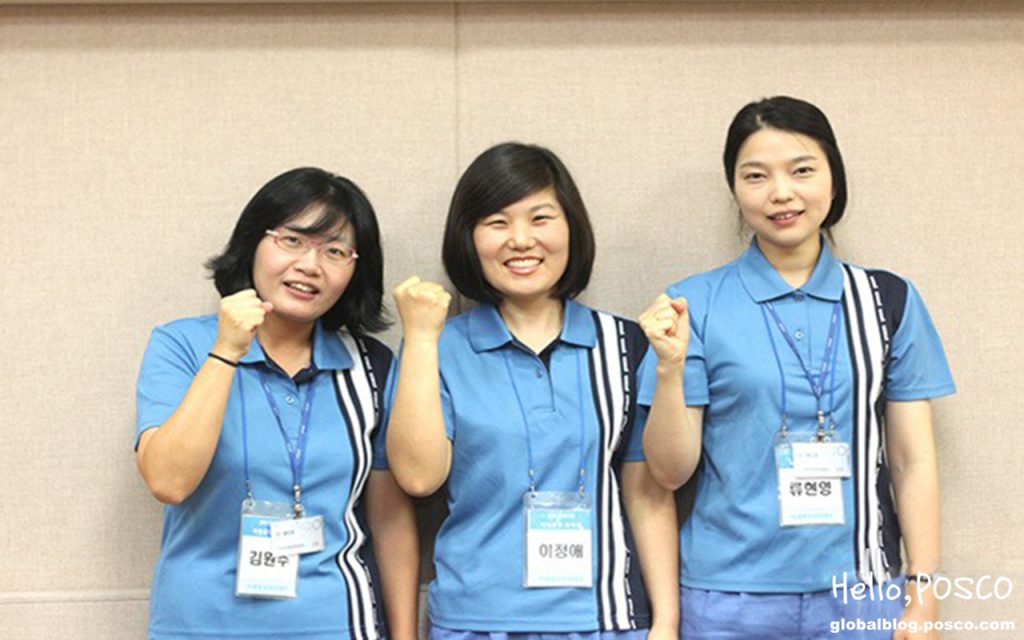 Has your stereotype of steelmakers changed since reading our post? For all the women out there, don’t give up on your dreams for pursuing a career!

“If women remain silent, there will inevitably be a glass ceiling. Though it may be difficult, women in various industries must make a move to break it.” – Eunjoo Choi, POSCO’s 1st Female Executive at POSCO A&C 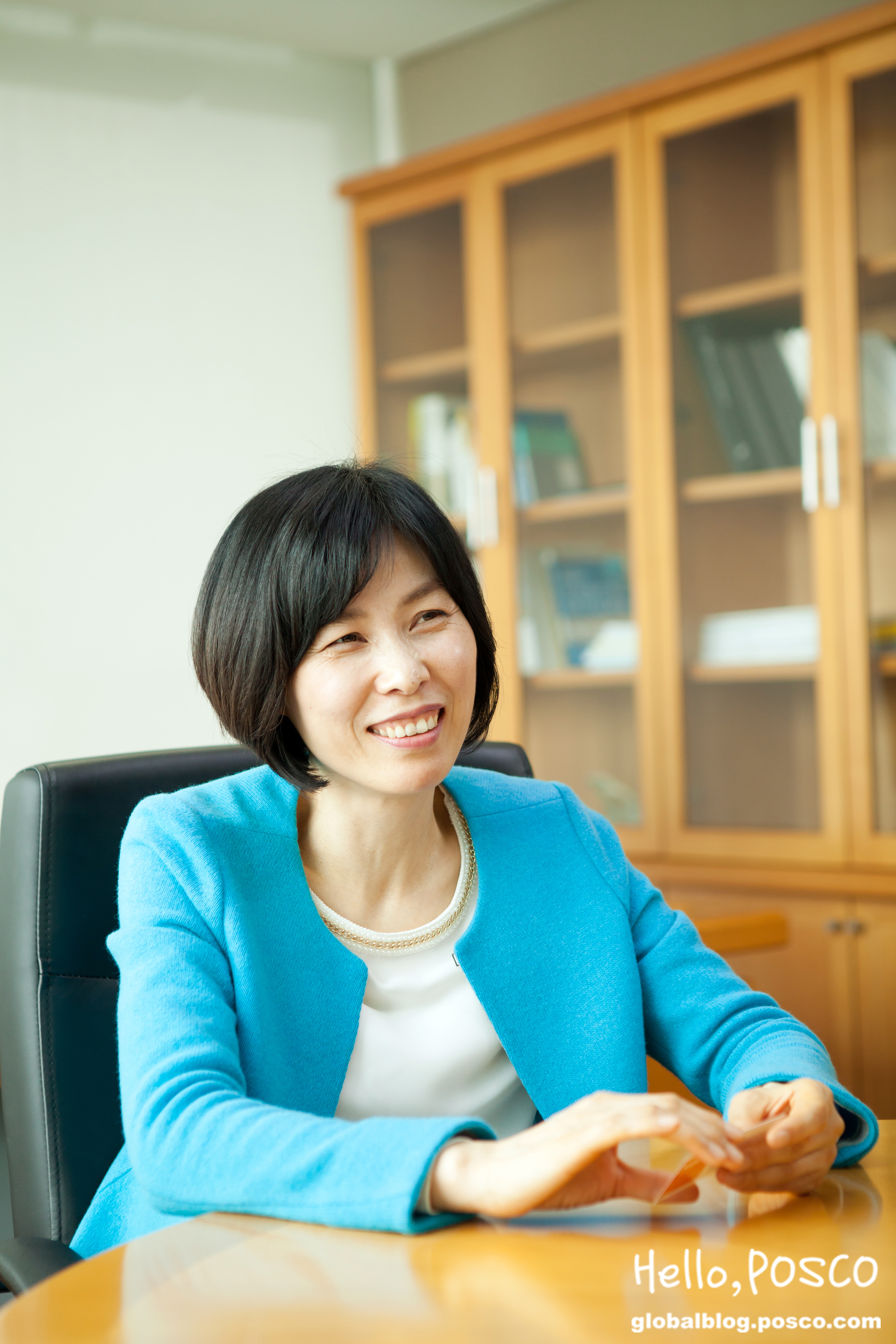 Eunjoo Choi, executive at POSCO A&C, has a broad range of experience in finance and investments, as well as, business strategy. She decided to apply to POSCO back in 1990 when she came across a newspaper ad for a female position at POSCO. Below are her 3 tips for success.

1)    Use your morning time wisely: If you start earlier than others, your day will be much longer and productive. Take advantage of your mornings to make time to focus on your responsibilities!

2)    Go out with your colleagues: As you go up in hierarchy, competition increases so it is possible that colleagues will become competitors. However, this should not be in the case. Try to always be sincere and share with colleagues.

3)    Listen to others for answers: A key strength for women is their capability for ‘tolerance’ and ‘empathy’. If you take the time to listen to others, it is likely you will find a better alternative.