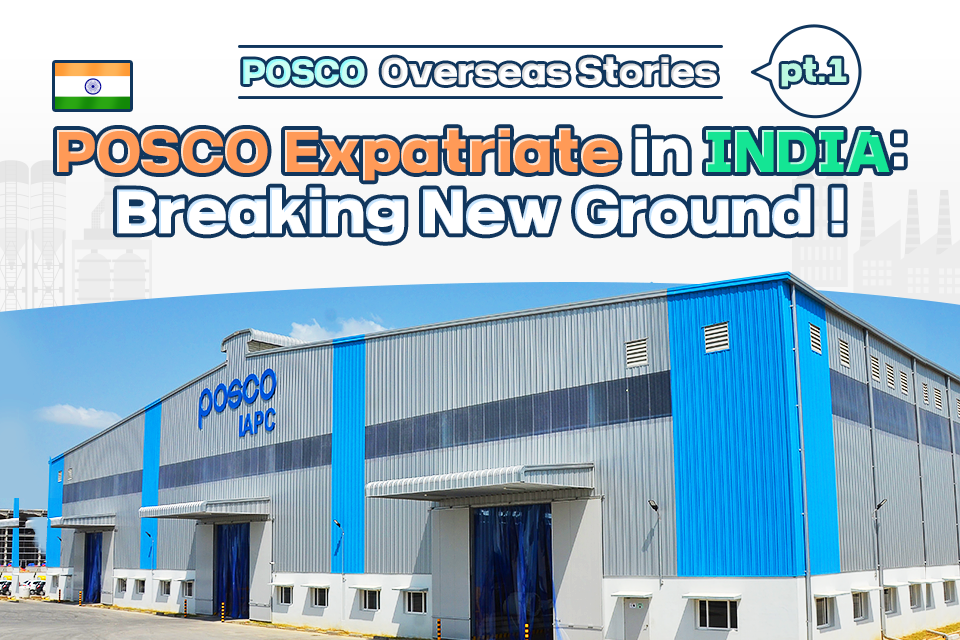 Namaste. This phrase might be familiar to many people as a greeting used in India. The literal meaning of this is, “I pay my respect to the gods in you,” so this can be a greeting to the user as well. India is filled with respect for each individual’s beliefs and ideals and is a place people want to visit at least once in their lifetime.

POSCO Newsroom presents to you the story of a POSCO expatriate in India who is working to enhance the status of global steelmaker POSCO. Today’s star is POSCO’s Yang-Su Lim, working in POSCO India PC (Processing Center), Ahmedabad. Meet Lim’s vivid story that he had gone through since the completion of the Processing Center.

The Ahmedabad Processing Center is located in the Sanand Industrial Complex, Gujarat, about 900 kilometers southwest of New Delhi, the capital of India. The area has recently emerged as an automotive manufacturing hub in India.

The Center, in charge of processing Cold Rolled steel, opened in April 2016. I came here as a POSCO expatriate in June 2015, while construction was still in progress. 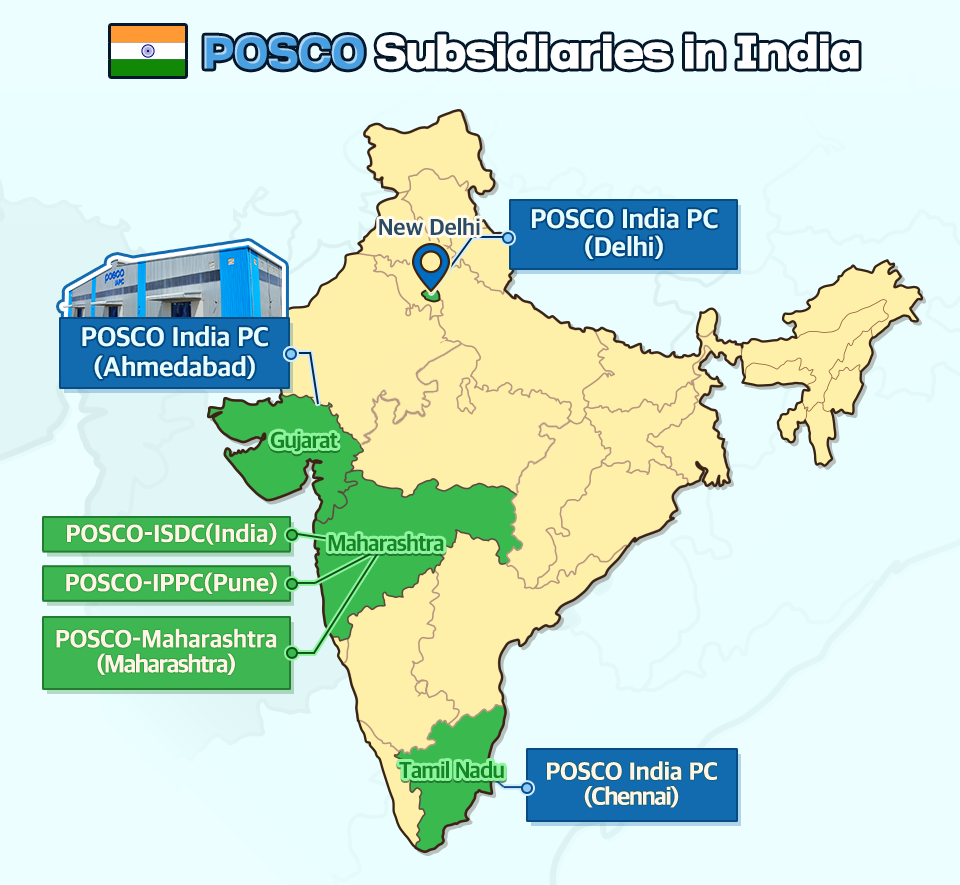 The Ahmedabad Processing Center is divided into three sectors — a factory with processing facilities, an office building, and a cafeteria — and has an annual processing capacity of 120,000 tons. As of 2019, there are a total of 200 employees, including two expatriates, 77 local employees, and 128 employees of partner companies. Our main task is to process materials from POSCO headquarter and overseas manufacturing subsidiaries into the forms desired by clients. We are also actively engaged in other affairs and contribution activities for the local community.

The best selling product at our company is automotive steel plates. Global automakers such as Ford, Suzuki, Tata, M.G Motor, and domestic automotive part markers such as JBM, Victora, and Vee-Gee are our major clients. Home appliance companies, including JCI-Hitachi and Highly Electric, and manufacturers of solar panel support structures are also some valuable clients.

When the processing center opened in Ahmedabad in 2016, sales stood at a mere 26,000 tons. Expectations were high, so it was a little disappointing. However, last year, as a result of all the efforts of our employees, we could boost sales to 140,000 tons, which is a growth of nearly six times — all within four years.

l Out in the Wild: Cutting Costs 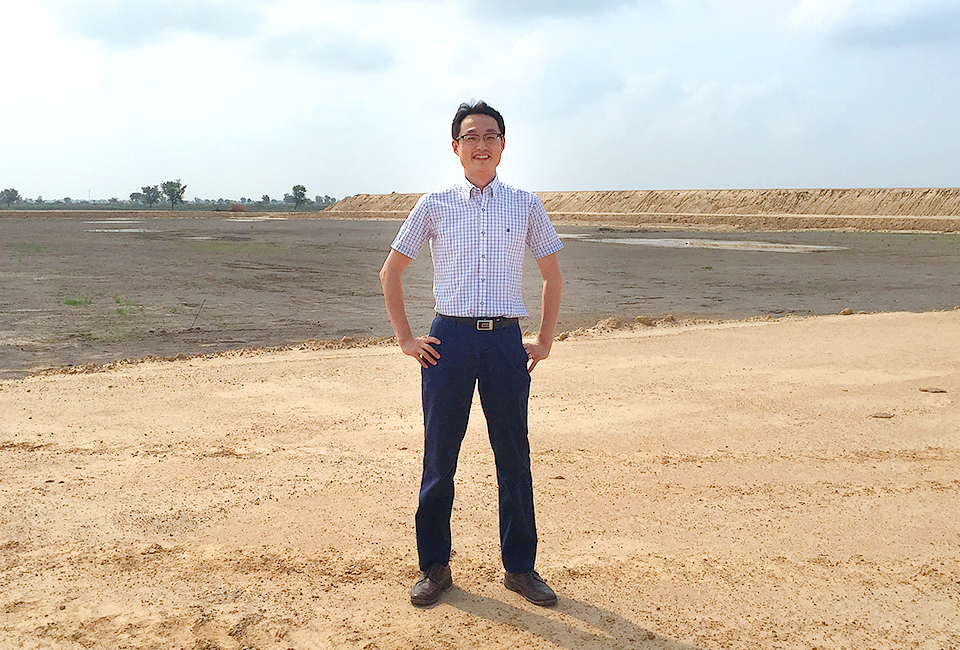 I’m a general manager in the sales department, so I am in charge of all sales-related tasks, including client and demand development, material purchase, and bond management. At times, I have to switch between several roles, such as a ‘manufacturing manager’ in charge of production and quality, ‘a personnel manager’ in charge of the labor and human resources sector, and a ‘representative’ in meetings with local government agencies.

Five years have passed since I came to Ahmedabad. Sometimes I’m reminded of when I first arrived here. There was nothing but a container officer where I had countless meetings with architects to design the plant and optimize specifications of facilities. I also made numerous phone calls to my seniors in POSCO, Korea, who had much experience in the construction area. I remember talking with them on the phone the whole day.

To cut construction costs, all purchase orders for the construction were placed according to individual parts, so from the beginning, I had to meet separately with seven companies, including electricity, civil engineering, and interior companies. Since most of the construction work proceeded at the same time, there were some challenges because a delay in one sector led to a complete stop in the construction itself.

However, it was all worth it. We succeeded in saving investment costs by more than 1 million USD, and also we were able to understand the entire construction process of the processing center. Frankly, I couldn’t understand why I had to go through all the trouble during the construction period. But as the construction came to an end and I could see the plant and office building on the site, I felt really rewarded and proud. 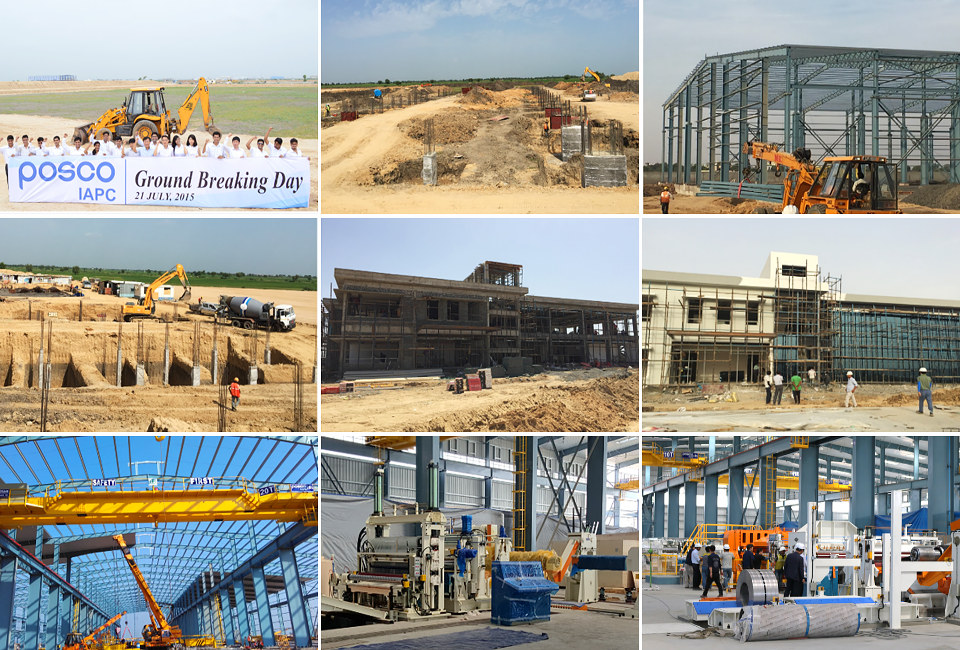 ▲ The Ahmedabad Processing Center under construction

l “It was perfect!”: Pioneering a New Market

Another memorable story would be “expanding sales by pioneering the high carbon hot-rolled steel (HR) market.”

In 2016, at the beginning of its establishment, the processing center faced difficulties in expanding sales since it supplied to global automakers solely. The center needed a breakthrough to survive in areas where demand for carbon steel was relatively low. While on market research at companies in various industries, we learned that there were several client companies nearby who were using high carbon steel.

* High Carbon Steel: Steel that have more than 0.3% carbon or 0.15% carbon with added alloy elements. Client companies can secure high strength and hardness properties through final heat treatment. They are used in making automotive parts and industrial machinery. 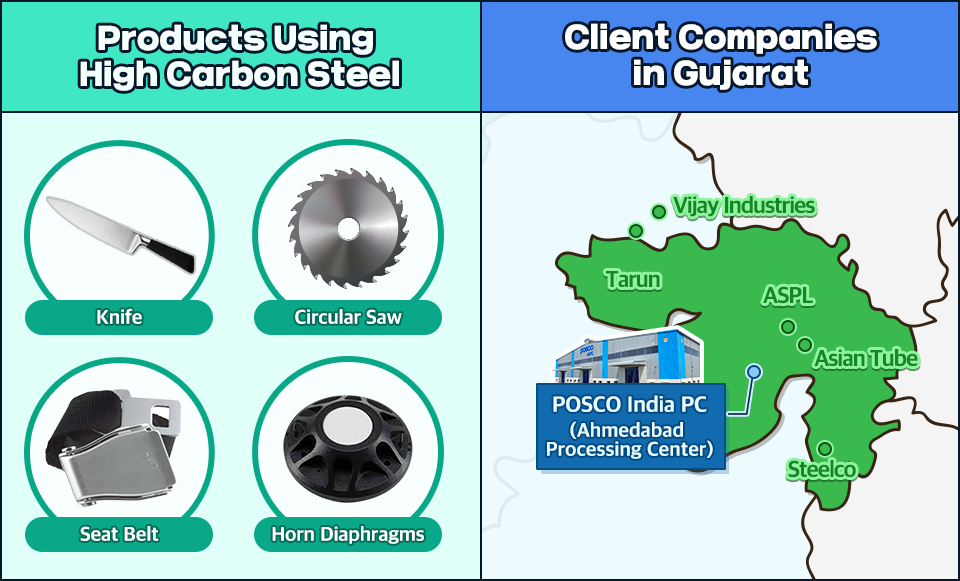 To pioneer a new market, we conducted market research and sought to discover potential clients from December 2016. But it wasn’t easy at first since the steelmakers in the area already dominated the high carbon steel market. Client companies hesitated, saying that POSCO steel was excellent but expensive. Their existing partnership with the steelmakers was another problem. Six months passed without any significant outcome.

Amidst all the rejection and frustration, a Korean saying, “Dig a single well,” struck my mind. This proverb means that focusing on something wholeheartedly will yield satisfactory results. So the next day, I set off straight away to Ahmedabad Strips Pvt. Ltd. (ASPL), which is located near the center. I met with the person in charge every day and tried to form a close relationship, talking about Indian politics, current market conditions, and personal life. One day, something surprising happened. On a rainy day in July 2017, ASPL placed a trial order of POSCO’s high carbon hot-rolled steel and contracted 25 tons. How did I feel? It was as if I completed a full marathon.

“It was perfect.” This was the response we got from ASPL. After constant persuasion, we succeeded in getting additional orders. We were introduced to new client companies, and in 2017 alone, the contract volume reached a total of 300 tons. With new clients and a successful quarterly contract with ASPL, the contract quantity increased as well. As a result, in 2018, the center recorded sales of 3,000 tons, which is ten times higher than the previous year.

And this was just the beginning. The client said that it wished to increase the proportion of POSCO products. It was a moment when the efforts of our staff finally paid off. In April 2019, POSCO signed an MOU with ASPL to supply 10 thousand tons per year. We continued to develop and attract new clients and finally, in 2019, we were able to sell more than 6,000 tons.

The high carbon hot-rolled steel project is a typical example of POSCO’s philosophy, ‘Business with POSCO,’ which pursues shared growth with client companies. As of 2019, the high carbon hot-rolled steel acclaimed for approximately 5% of total sales at the Ahmedabad Processing Center, while ASPL was able to reduce costs and improve productivity with POSCO products. “Using POSCO products has improved the rate of error by more than 30%, and the productivity of rolled products by more than 1.5 times compared to the local products of India,” said an ASPL production manager.

With the rapid spread of COVID-19 and its impact on the economy, the Ahmedabad Processing Center is also doing its best to overcome the difficulties it faces. The center has formed a TF as a response to the COVID-19 issue. The TF manages the health of employees, quarantine status of the plant, transport vehicles, and partner companies as well, to prevent any case from occurring.

According to the guidelines from the Indian government, all companies within the nation had to shut down, and the Ahmedabad Processing Center also ceased operation temporarily from March 23. Currently, the center has resumed operation, but owing to the decrease in domestic demand, a reduction in sales seems to be inevitable.

The Indian government has announced four series of lock-down regarding COVID-19 from March 24 to May 31. However, in the case of *Lock-down 4.0 (May 18-May 31), measures have been relieved comparatively, allowing transportation and deliveries within the country. In the Lock-down 5.0, which is in effect from June 1, the central government has granted more authority to the state government resulting in the reactivation of local companies. However, restrictions are expected to continue in major cities, such as Delhi, Mumbai, Chennai, and Ahmedabad, where some confirmed cases are occurring.

*Lock-down 4.0: The fourth phase of COVID-19 restriction from the Indian central government. The guideline prohibits air travelling, limits the operation of hotels and restaurants, and bans regular transports from 7 p.m. to 7 a.m.

As a measure to overcome the immediate crisis, all the employees at the center are doing their best to advance into the market and cut costs. Each employee is working with responsibility and ownership for the company. I hope that the economy will recover soon, and I am confident that this will give us a valuable lesson, and we can get through this situation and Jump-Up together.

I will definitely miss this place when I return home. But before then, I will do my best with the employees here at Ahmedabad to secure POSCO’s place in India.