“Bonjour les amis! My name is Vivier. Oui, I’m French, but I was born in New Caledonia. I’ve come to Korea to experience work at a global leading industry, SNNC, and to venture into the dazzling Korean culture first hand.”

Vivier is a vibrant twenty-five year old, who has completed an internship of three months at SNNC. She has bachelor’s degree in Korean and English. Before coming to Korea as an intern, she’s already been to Korea in 2010, to improve her Korea at the Hongik University.

“I encountered Tae-Kwon-Do for the first time when I was eighteen years old. I remember asking countless questions like ‘how do you say Side-kick, Turning-kick, Front-kick, Axe-kick etc. in Korean?’ and so on until finally the master yelled, ‘If you’re that curious, go learn Korean yourself!’ …C’est une excellente ideé, Master.”

Just like that, Vivier has decided to switch her studies from Economics to Korean. Now, let’s hear more about Vivier’s somewhat hectic and jocular, yet no doubt meaningful and valuable time she’d spent at SNNC.

SNNC is a joint venture between POSCO and SMSP, New Caledonia’s largest nickel exporter, manufacturing and selling Fe-Ni which is the main material of stainless steel and other byproducts. SNNC is the first to domestically manufacture and supply Fe-Ni to POSCO, securing a stable supply of materials while contributing to securing the country’s six major strategic minerals. SNNC is a leading global industry who places high value on environment by using the newest and the most effective clean technology.[/box]

How it all began

Vivier first heard about the collaborative Nickel project between POSCO and SMSP in 2007 through New Caledonian broadcast. Hearing this news, the first to come to her mind was, “That’s where I belong.” Vivier admitted that she’d shown a little, just a slightest hint that she really wanted to work for Gwangyang SNNC during her internship at SMSP. Much to her surprise and overwhelming joy, soon later she got a call…oui, from Gwangyang SNNC, to come to Korea for an internship opportunity.

Some tips to adapting 100% at your Korean Internship

Beware of the Korean “Question” Attack 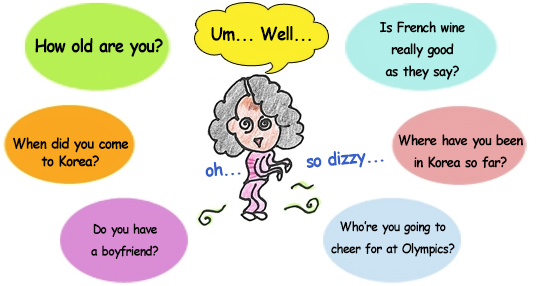 “Every Monday, my coworkers ask me what I’ve done over the weekend. In France, unless any particular occasion was mentioned, we normally don’t ask such questions. It’s often thought of as very personal matter aside from work.”

As Vivier mentioned, don’t be fooled by the Hollywood stereotype of the quiet, somewhat stoic and even mysterious Asian community. You’ll be surprised at how curious and talkative Korean people are when it comes to a newcomer in the community. Actually, be prepared to be bombarded with loads of questions, from age to your love life, family, weekend schedule, taste in wine, your area of studies, to all kinds of personal questions….and of course, the follow-up question “why” to all your answers.

Lost in the Pool of Formal and Informal Korean

“I had very good reasons to be confident about my Korean. I have a bachelor’s degree in Korean and studied at Hongik University in Seoul as an exchange student for a year. Well, little did I know, that office vocabulary was a whole new chapter to learn, along with distinguishing between formal and informal language use.”

There are many obstacles to fully comprehending Korean that you can’t learn just from textbooks and language classes. First and foremost, Koreans generally speak very fast. Second, in office, there are multiple job titles that almost always must be followed when addressing any coworker. To name a few, are daeri, sajag, busajang, chajang, sawon, and so on. But most importantly, you have to be careful with how you form your sentences. In Korea, there are two ways to speak—formal and informal—and foreigners often make mistakes in distinguishing which to use at the appropriate situations or people.

However, no worries. Vivier has indeed made such mistakes. Still, other coworkers have happily helped or taught Vivier the correct expressions afterwards. 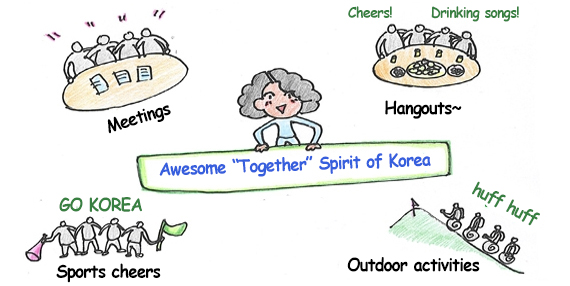 “Are you all friends?”

That’s the question Vivier asked her coworkers when she saw them enjoying get-togethers after work, having meetings, going to cheer for the same soccer teams, hiking, crying, laughing…activities that are definitely not related to work.

You may be surprised at how much involved coworkers are to each other’s lives. Though they spend all day together at the office, aside from work, they often do many activities together. Vivier mentioned that working in Korea has not only given her a valuable work experience, but a sense of ‘togetherness’ with the fellow coworkers. She also added by saying that they weren’t just coworkers, but felt more like a family. There is a strong communal bond in Korean office life.

The Amazing Taste of Korea from Vivier 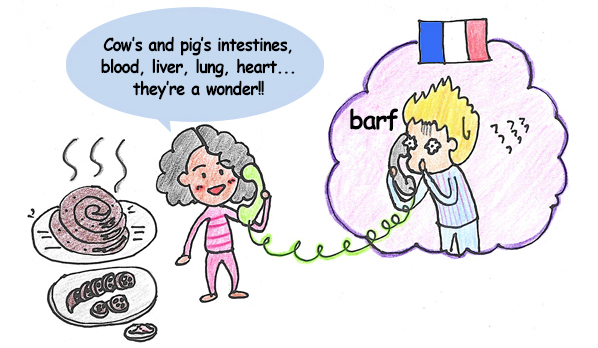 That’s how I explained Sundae to my boyfriend back home, which probably don’t sound all that appetizing by the description. Nonetheless, Sundae was indeed my favorite Korean dish while my stay in Korea. Its squishy, wiggly, and soft texture in dipped salted shrimp is a wonder that you must try.

Korea marks the days that starts and ends Summer, the former called “Chobok,” and the latter, “Malbok.” During this summer season, Koreans have special dishes, the most famous being Samgyetang. It’s actually just a soup with ginseng and various ingredients stuffed inside the chicken. What’s special though, is that Koreans thought it was a good idea to “win” summer/or Heat, by eating a boiling hot soup during the hottest days of the year.

“Yes, I feel totally cooled down!” is a phrase you’ll hear often from Koreans after finishing the soup, while soaked in sweat.