The INNOVILT product to be introduced today is “POSCO Lightweight Soundproof Tunnel (PosLST)”. POSCO Newsroom presents to you the story of a POSCO researcher who developed the product together with POSCO’s clients, Tech Square and Yujin Steel Industry Co., Ltd.

It has become a challenge to enjoy calmness in the city, even up the mountain, since the traffic noise from far away is heard so well. The same also goes to labs where the windows are tightly closed. The loud sounds of horning and the engine of heavy trucks are more than enough to disturb work.

Before some explanation, let me introduce myself. I am Myung-Hyun Roh, a Senior Researcher at POSCO Steel Structure Research Group. And the reason my ears are so sensitive to traffic noise is that I am currently researching new soundproof tunnels that reduce noise.

Complaints for road traffic noise received by the Anti-Corruption & Civil Rights Commission over the past three years have steadily increased — 39,326 in 2017, 63,011 in 2018, and 113,073 in 2019. And about 98% of these complaints are from residents living near the roads. Residents complain that the inconvenience caused by noise is so great that it is difficult to live with the windows open.

But getting rid of all cars on the road can’t be a solution. And because of this, soundproof walls were built in various places. However, these walls couldn’t be the fundamental solution and turned out to be dissatisfactory, since they didn’t reduce noise significantly in high-rise buildings, reflected sunlight causing the indoor temperature to rise, and harmed the view of the residents on lower floors of the apartment buildings. 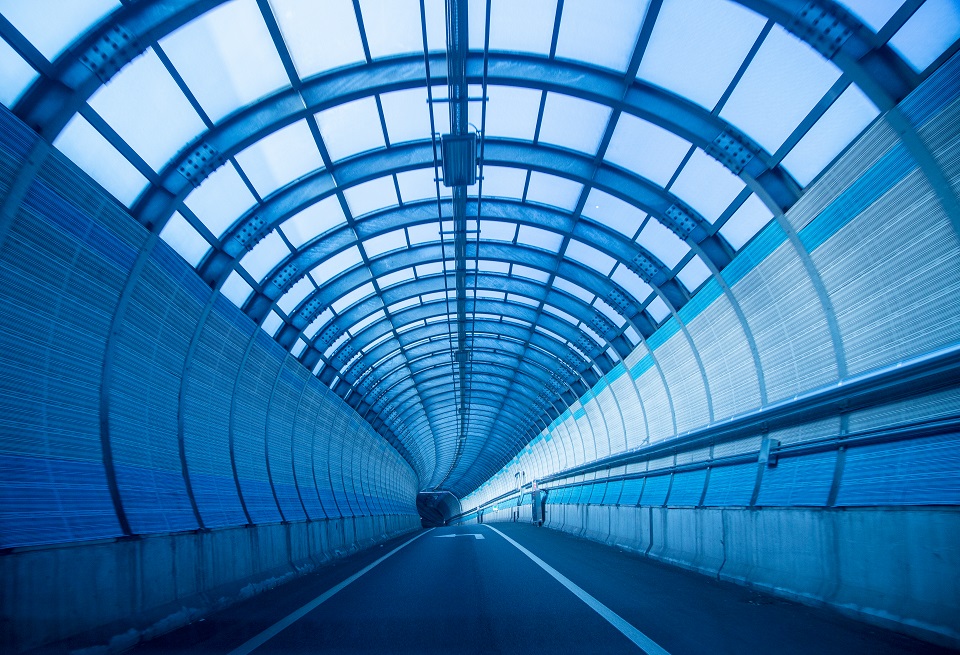 However, the soundproof tunnel has many factors for improvement as it has not been sufficiently reviewed in various aspects, including safety, usability, economic feasibility, and aesthetics. There isn’t any standardized design method, so the design is made uniformly, in simple forms that do not harmonize with the surroundings. In complex urban areas, soundproof tunnels must be installed on existing structures such as bridges and overpasses. In this case, the excessive weight and additional loads caused by wind could exceed the design load, which becomes a critical problem.

This is the reason why our Steel Structure Research Group started to develop soundproof tunnels. With optimal design from POSCO steel to lighten the structure and objective performance evaluation, we thought of developing a reliable soundproof tunnel product and construction method, which could eventually help reduce traffic noise drastically. Since POSCO already has high-strength premium steel products, there was no reason not to do so. That’s how the R&D for new soundproof tunnels began.

l Our Best Partners in the Making

An outstanding R&D is accomplished through collaboration. So for the project, a client company with expertise in the field joined as a partner to support R&D. The company is none other than Tech Square Co., Ltd., which has excellent experience and capability and also holds a patent in the field of lightweight soundproof tunnels. In 2013, Tech Square proposed a “truss roof-type soundproof tunnel construction method,” which featured several steel pipes arranged in a triangular shape instead of H-shaped steel, the structural material of conventional soundproof tunnels.

The uniform frame structure of the H-shaped steel method caused excessive bending in soundproof tunnels when installed on wide roads. Increasing the size of the H-shaped steel could help solve the bending. However, this increased the product weight, which led to a rise in construction cost. Tech Square’s idea was to secure lightweight, economic feasibility, and safety with a truss structure using high-strength steel pipes instead of H-shaped steel. Since POSCO does not produce section steel, the idea of replacing them with steel pipes sounded promising. 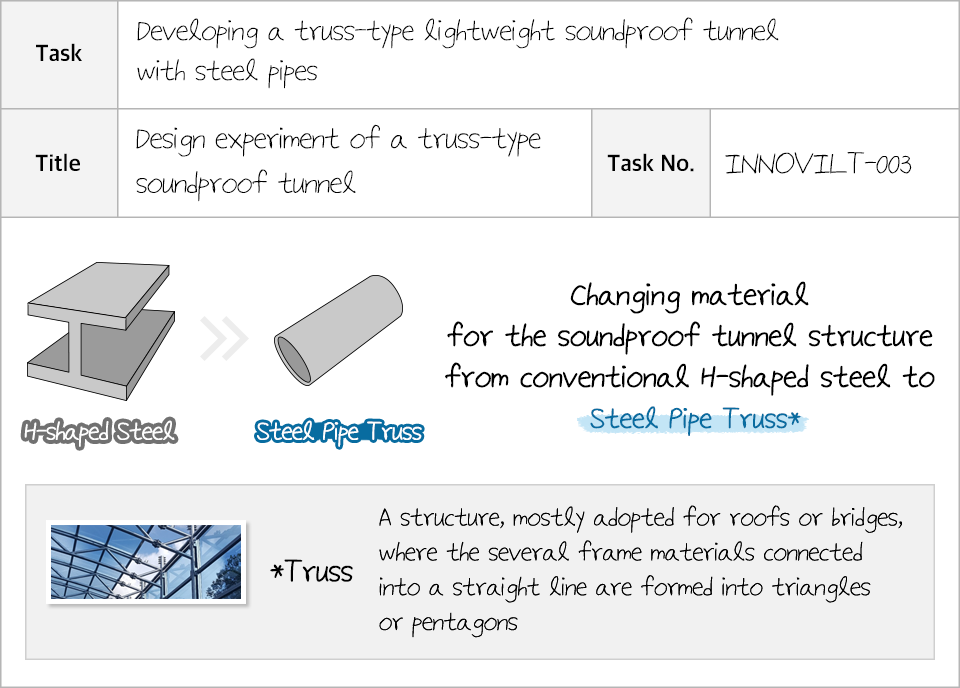 Along with Tech Square, there was another client partner who joined the project — Yujin Steel Industry Co., Ltd., a specialized manufacturer of steel pipe. To replace H-shaped steel with steel pipes, it was necessary to find a company that could process high-strength steel plates into steel pipes. And Yujin Steel Industry, which had abundant experience in manufacturing pipes, decided to take over this role. Now that the dream team was complete, we could set on operation! Our goal was to reduce weight and costs compared to the conventional H-shaped steel method. And, in January 2014, we finally started full-scale R&D.

l The Journey to Develop a Light & Strong Soundproof Tunnel

The second feature for the soundproof tunnel that we aimed for was that it should be light. As explained above, since the soundproof tunnel acts as an additional fixed load on existing structures, secure structural safety becomes challenging if it is heavy. Also, since soundproof tunnels must be constructed on roads that are being used, it is important to construct them quickly compared to other structures because longer road construction causes great inconvenience to users. So as a solution for this, we adopted POSCO high strength steel SHT460 (Structural High Strength Tube 460, a hot-rolled coil of tensile strength 590 MPa Grade) and PosH690 (POSCO High strength 690, a hot-rolled coil of tensile strength 690 MPa Grade) as the material for steel pipes. 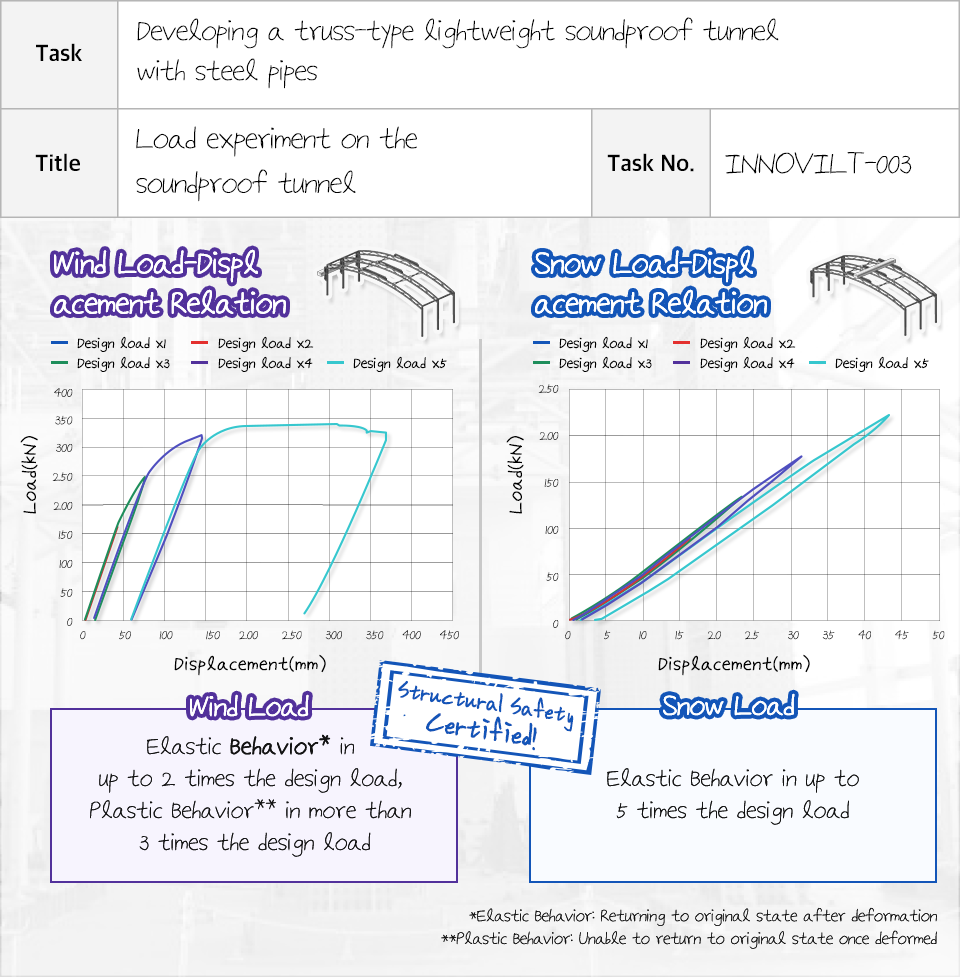 Focusing on the three features mentioned above, experiments and verification were repeated for 17 months of research. We obtained results showing the new product to be superior to conventional tunnels in all areas of noise reduction, weight reduction, and structural safety. Finally, we completed the new lightweight soundproof tunnel technology using POSCO materials. The new product was named POSCO Lightweight Soundproof Tunnel (PosLST)!

Our mission didn’t end with just technology development. Once, a technician at a client company mentioned that outstanding technology objectively verified will someday show its value even if it does not employ expedient marketing. At the moment, I thought that it would be nice if the technology we developed could receive objective certification. So we embarked on a new task: Getting the New Excellent Technology* certification!

Looking back, the task was quite challenging. It was not because of the low certification rate or the high level of judging, but because the effort and time spent on the entire NET screening process, from applying to being certified and notified, is never easy. We devoted ourselves nine months to the NET process, including on-site application and quality verification. And finally, on September 12, 2016, PosLST was proudly designated as New Excellent Technology No. 795 (Tunnel-type soundproof facility using truss pipes with transverse and detachable side soundproof panels and lateral sound-absorbing panels) from the Ministry of Land, Infrastructure, and Transport. It was the first soundproof tunnel construction technology in Korea to receive official verification. 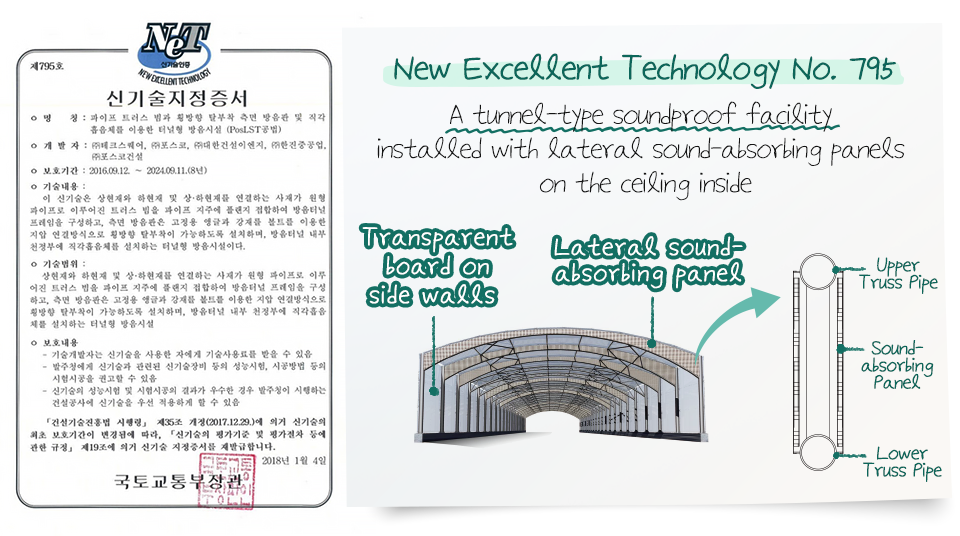 The conservative industrial atmosphere makes the initial acceptance of new construction methods and products rather difficult. So, at first, I was worried that the market response would be insignificant.

Fortunately, such anxiety was nothing more than an overwhelming concern. In 2017, it was initially applied to the soundproof tunnel construction of the 2nd Gyeongin Anyang-Seongnam Private Expressway. Since then, it has also been applied to nine other projects, including the North Road Soundproof Tunnel in Wirye City and the Yongin Urban Planning Road Construction. And the PosLST Lightweight Soundproof Tunnel construction technology has been recognized for its excellence. 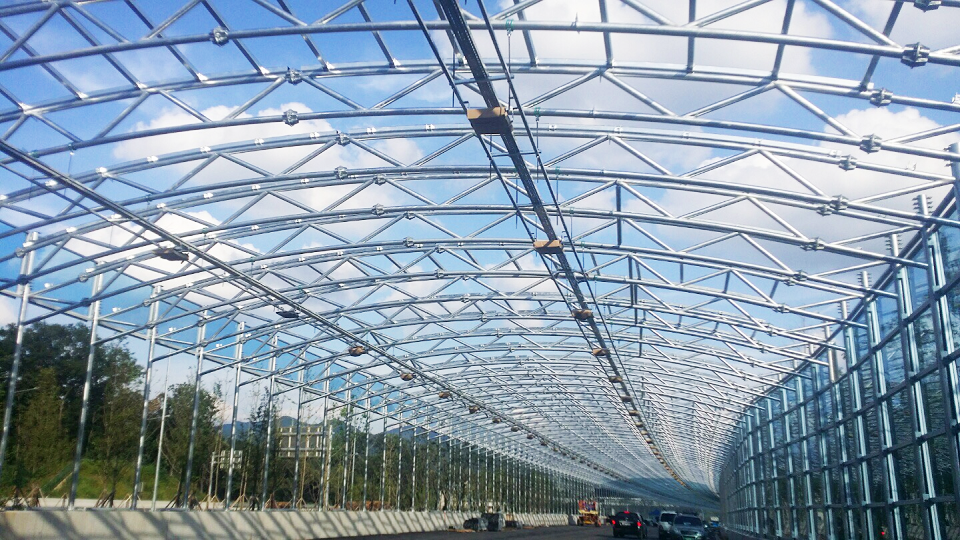 So, what are the advantages of PosLST evaluated in the field?

The first advantage of PosLST is, of course, noise reduction. The sound-absorbing panels installed in the steel pipe truss on the roof of the soundproof tunnel are excellent in reducing the noise generated at the entrance and exit of the tunnel. Also, by placing the opaque sound-absorbing panels, originally installed on the sidewall of the tunnel, on the tunnel roof, the visibility of drivers has improved along with better lighting.

The next advantage would be the tunnel’s lightweight. Since PosLST tunnel is made of POSCO’s high-strength steel products, SHT460 and PosH690, it minimizes the overall pressure on the structure. Compared to conventional H-shaped steel adopted soundproof tunnel frames, the weight can be reduced by about 53%, satisfying the design load and achieving both lightweight and economic feasibility. Besides, the truss structure is effective in preventing bending by improving the structural strongness of the tunnel. 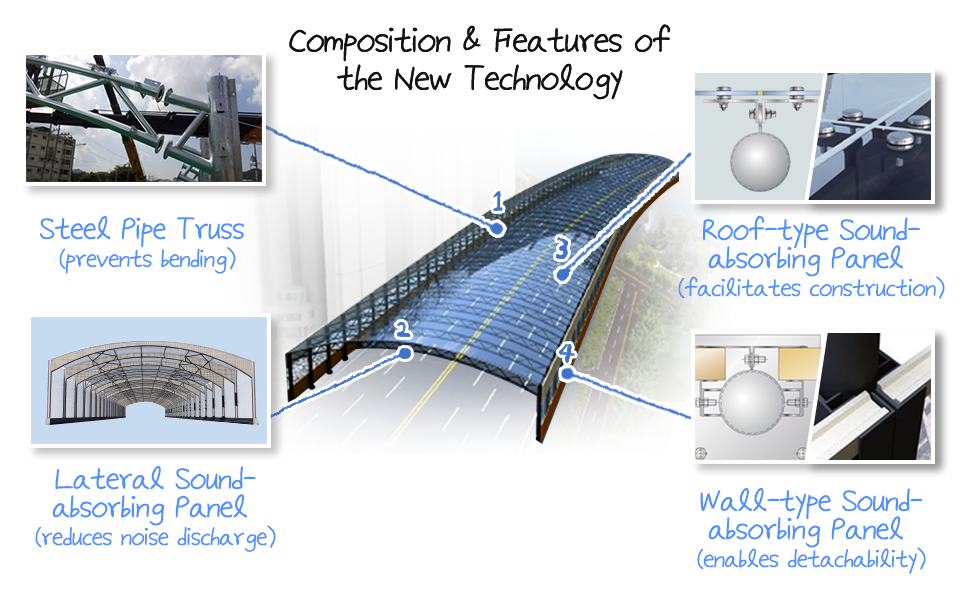 The third advantage is excellent constructability and economic feasibility. As mentioned earlier, in PosLST soundproof tunnels, the sound-absorbing panels, which are key functional material, are inserted into the steel pipe truss on the roof side. So, for the side of the tunnels, transparent boards can be installed instead of the opaque sound-absorbing panels. Also, it is manufactured in a detachable manner, so in case of damages, those parts can be partially replaced. In conventional soundproof tunnels, replacing the side sound-absorbing panel is difficult. Thus, maintenance costs are high. Previously, since the soundproof panels on the roof were installed on H-shaped steel, it was necessary to install a separate frame to support four sides but, with PosLST, the panels are installed on a round steel pipe, so you don’t need a frame — you only need to fasten bolts using angles! Thanks to this, if the optimal design is based on POSCO high-performance steel, construction costs can be reduced by about 15% compared to the existing construction technology, and maintenance costs required for replacing damaged sound-absorbing panels can be reduced by 31%.

Another thing that cannot be left out is “aesthetics”. The design of PosLST is superior compared to conventional tunnels since it applies artistic circular steel pipes. A variety of atypical structures can be implemented, enabling harmonious designs that are fit for the urban landscape. 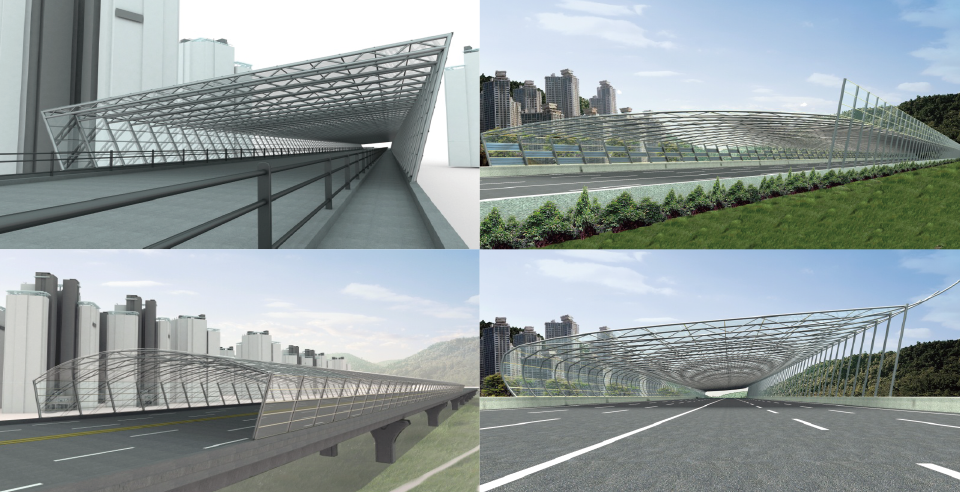 The industry is also showing favorable responses to PosLST. Officials of the construction company in charge of the production and installation of soundproof tunnels say, “Since the material is made of POSCO steel, PosLST is lighter and requires fewer bolting parts. So the construction period is shortened, and the process is easier than when using conventional materials. Once installation is complete, it also boasts outstanding aesthetics features, so POSCO’s new technology is expected to spread widely in the future.”