Today, POSCO Newsroom will be discussing “little” things. Have you heard of angles? They are L-shaped materials smaller than a palm but used to hold the walls of a building — the strongest L there is. The INNOVILT product to be introduced today is “Super Angle for Stone Building Construction” and POSCO Newsroom presents to you the story of a POSCO researcher who developed the product together with POSCO’s client, WOONHYUNG CO., LTD.

l Non-Visible Doesn’t Mean You Can Use Anything

I’m Kyung-Yun Yeau, a senior researcher at the POSCO Steel Solution Research Group. My task is to study the application technology of construction materials using POSCO steel. I usually handle large-scale construction materials and structural solutions, but what I’m going to talk about today is the small yet strong “angle”. Angle is used to supporting the stone material on the exterior wall of a building. In general, 1,500 to 2,000 angles are used in a five-story building, and annual domestic usage reaches over 30,000 tons.

Most large construction companies designate using STS304* for angles since STS304 has excellent durability and corrosion resistance. However, angles aren’t exposed outside, making it difficult to check. And owing to this, some sites use imported STS200 series or STS410, which are relatively inexpensive. There are even cases where aluminum and general carbon steel are applied.

STS304: The most widely used stainless steel product. Shows excellent formability, highly weldable, and corrosion-resistant. Contains more than 8% nickel.
STS200: Product with nickel content lowered to 1% or less. Rust may occur with low corrosion resistance compared to STS304. Does not stick to magnets so in many cases, sold as STS304.
STS410: The lowest-priced stainless steel product, with lower corrosion resistance than the STS200 series.

Since angles aren’t visible, is it ok to use anything? We thought no. Rather, we believe that more reliable materials should be adopted because we can’t see them. Recognizing the current situation, our research group immediately set on an R&D project of a new angle for stone building construction that applied POSCO steel. The mission was to attain both price competitiveness and safety by securing the strength while being cheaper than STS304. Another additional goal was to make the angles easily applicable on sites.

l Developing “Anchor Plus,” the Solution to Conventional Angle!

First, 293 patents for stone building construction angles in Korea, Japan, the U.S., and Europe were analyzed to grasp the conventional angle technology. As a result, we concluded that coming up with simple construction technology and implementing optimized structural performance was as important as securing price competitiveness. For this reason, the “anchor tightening method” was chosen. In this method, the angle is placed between the wall and the stone, and it fixes the stone material with its angle, control plate, plug tip, and bolts. Since it is installed with some distance between the wall and the stone material apart, there is no whitening, which causes white spots due to the inflow of rainwater. It also shortens the construction period while being relatively light. 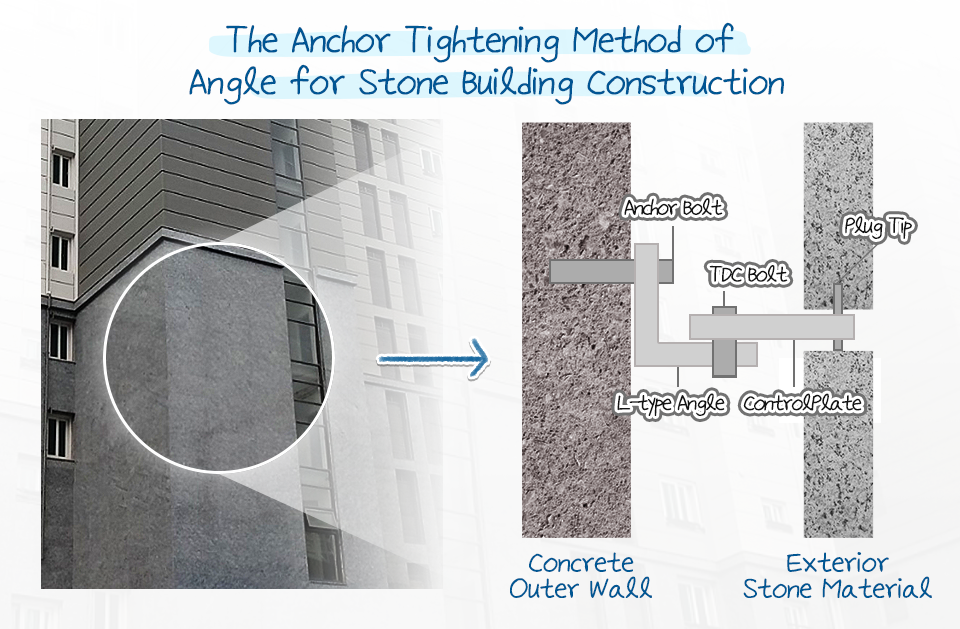 However, the anchor tightening method also had some areas for improvement. First, since the angle is constructed without considering the concrete condition of the wall, the anchor bolt support may or may not be sufficient. Even if the anchor bolt support is satisfied when installed in solid concrete, it may be reduced due to unexpected wall cracking. Also, if weight is applied to the angle constantly, a creep may occur, which means that the material will continue to deform over time. The resulting angle bending and cracks in the stone material are also chronic issues.

However, there were other tasks to be solved as well. We had to point out cases where plug tips (locking pins on the outer wall stone) were intentionally omitted. The plug tip is a pin that fixes the angle and the exterior stone and is often omitted mainly because of two reasons: 1) it is constructed at a period in construction when management is insufficient, and 2) it is hard to check once it is installed. Another problem was that in fixing, there were cases where only epoxy was used and not a proper plug tip. Resolving these issues was also our job.

We decided to start with solving the bending caused by creep deformation. First of all, I thought of using high-strength steel that could reduce the weight of the anchor while securing the overall strength. And POSCO Super Ductile Duplex (PossSD), a corrosion-resistant high-strength duplex stainless steel completed with POSCO’s new technology crossed my mind. PossSD has high strength, excellent workability, and corrosion resistance. Hence, it can be applied to a wide range, such as architectural exterior materials, railway train parts, tableware, pipes, and evacuation ladders.

What if we applied PossSD and added structural reinforcement? While the conventional angle is bent only once in an L shape, our product was made stronger by adding bent wings on both sides of the material. With this improvement, the previously 5mm to 8mm thick angle made with conventional STS304 could be thinned to 3mm, while enhancing the resistance to creep at the same time. 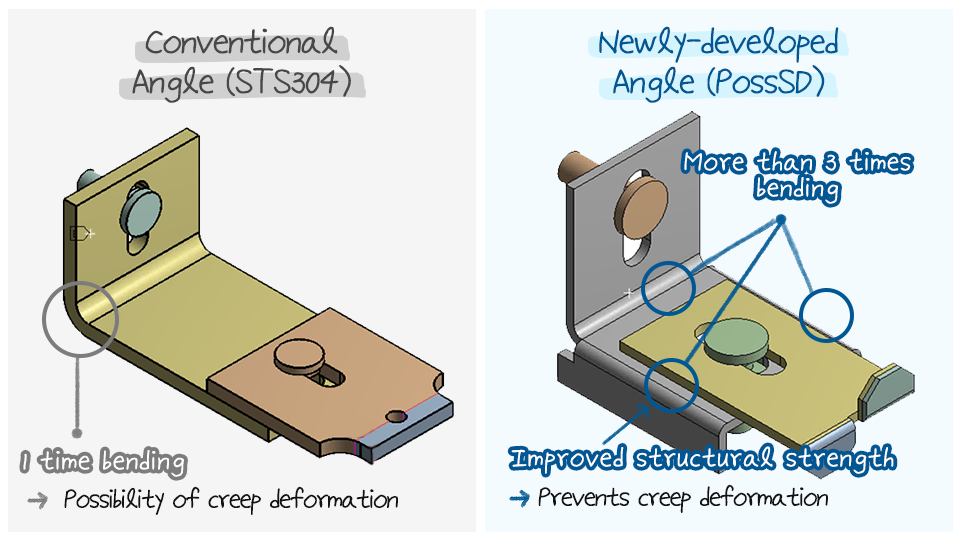 After two years of R&D, the new angle for stone building construction obtained a patent under the brand name of “Anchor Plus” in 2017. Compared to conventional angle for stone building construction, the thickness was reduced by more than 40%, securing economic efficiency. Also, having been verified by a structural engineer for generated stress, working stress, generated bending, and permitted bending, the new material satisfies all conditions and can be put to use immediately at the sites.

l Anchor Plus, Not the End

There was one more task to be solved before the full-scale application of the newly developed product. Finding a manufacturer to help develop the demand for Anchor Plus. At the time, Woonhyung Co., Ltd., a manufacturer specializing in stainless steel angle, caught our eyes. Woonhyung Co., Ltd. supplied angles made of STS304 to Samsung C&T Bok-Sik Jang, CEO of Woonhyung, also recognized the potential of the angle for stone building construction, a combination of new materials and design improvements, and decided to cooperate with us. So, as a result of the joint marketing efforts of the two companies, more than 120,000 Anchor Plus products were applied to the site of “The Sharp Central City,” a multi-purpose complex consisting of 2,610 apartment units and 238 studios, in Songdo.

▲ Actual application of Anchor Plus

Anchor Plus was sold in large quantities, showing its excellence even in the conservative construction market. However, a problem occurred out of sudden. In 2018, the process line producing PossSD was decided to be closed, and so there would no longer be material to make Anchor Plus. As PossSD had shown high strength and corrosion resistance at a reasonable cost in Anchor Plus, we seemed to be in great trouble. Will Anchor Plus be discontinued? We couldn’t let that happen! We set out to find a substitute for PossSD.

When all hope seemed to be lost, POSCO World Top Premium (WTP) steel POSCO stainless High Nitrogen 0 (PossHN0) came to the rescue. PossHN0 is a new stainless steel product that is economical and stronger with reduced nickel content and increased nitrogen content than conventional stainless steel products. When I asked about the product to other co-workers, they said that its durability was comparable to STS304, meaning it could replace PossSD!

We started the structural review again, this time with PossHN0. Unfortunately, however, we concluded that it wasn’t enough to apply in angles compared to conventional PossSD. However, we couldn’t stop here. I decided to reinforce the strength through structural change. The idea was to apply an embossing rail to disperse the load! 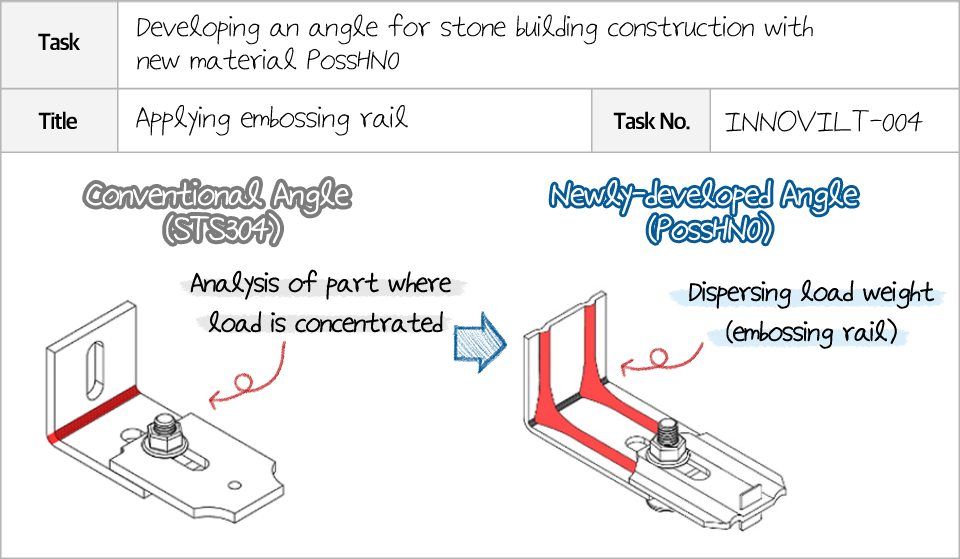 Embossing rails are protruding railings that stand out. The problem in the conventional angles was that the load was concentrated on the curved part of the angle. To solve this issue, we attached an embossing rail to our product to disperse the load weight, as seen in the picture above. By applying the embossing rail, the angle could withstand heavier weights. Also, since the control plate and the angle are held tight, the overall work became more convenient, and the connection also became stronger than before.

Thanks to the embossing rail, the angle itself could secure enough strength, so the wing parts on both sides that were attached to prevent creep deformation in the conventional PossSD angle could be eliminated. Also, to solve the previously mentioned problem of plug tips, the plug tips were painted and added to the control plate as a whole so that there wouldn’t be any loss in the first place.

R&D can only be complete after performance verification. In other words, we had to check whether the PossHN0 angle is superior in price competitiveness as well as performance compared to the conventional STS304 angle! We conducted testing to measure the load by attaching actual stone panels to the conventional and newly developed products. As a result, the STS304 angle for stone building construction could withstand up to 22kg, while PossHN0 showed an outstanding performance of bearing up to 35kg. 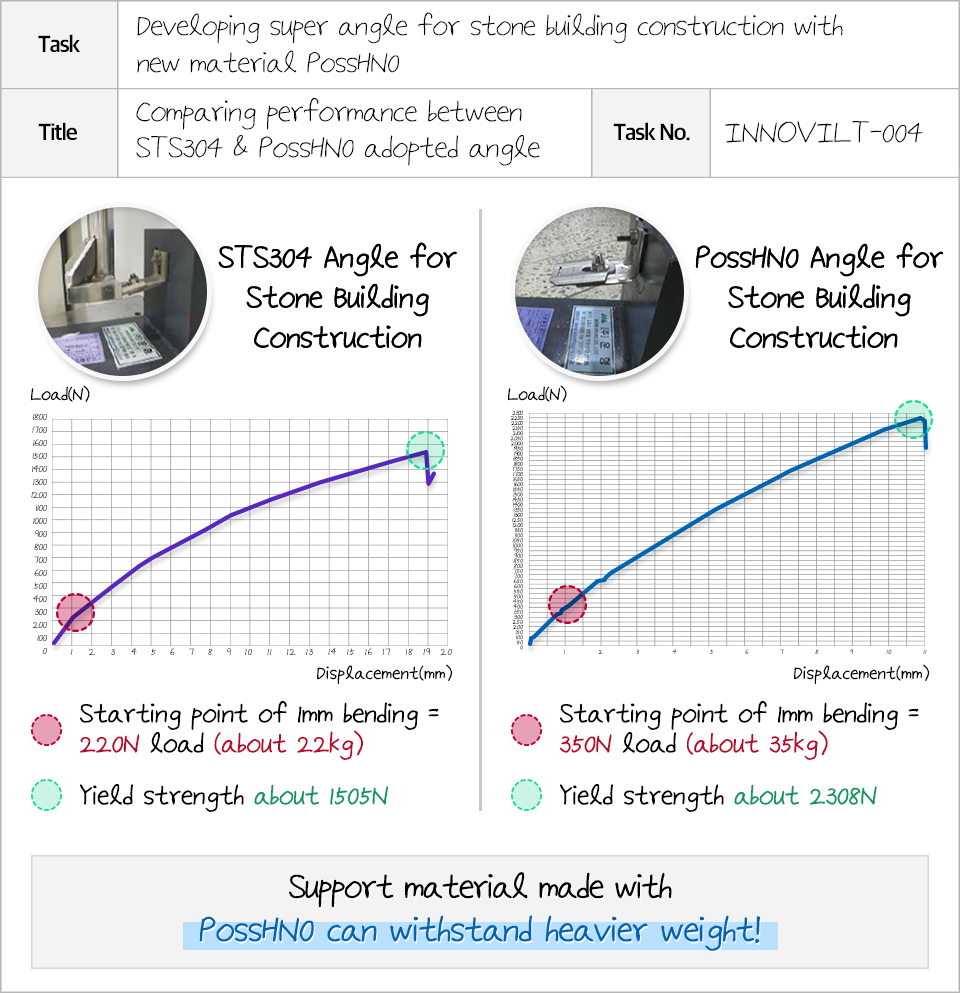 It shows that even though the PossHN0 angle is lighter than the conventional STS304, it proved to demonstrate better performance. And this was confirmed again through a test report issued from the Korea Testing & Research Institute (KTR) and a structural review by the Structural Technology Office. Following these verification results, the new angle for stone building construction was released into the market in 2019.

With the birth of the new angle, Woonhyung spurred marketing activities, and POSCO also showed full support for our client. As a result, the angle was applied to multiple large-scale construction sites, including Samsung apartments, Daewoo apartments, and POSCO E&C apartments. And in 2019, it was finally selected as an outstanding product by the Korea Land & Housing Corporation, laying the foundation for its expansion in the future. It also received KS certification. In October 2020, the product was certified in the 4th batch of INNOVILT products under certification under the product name “Super Angle for stone building construction”. 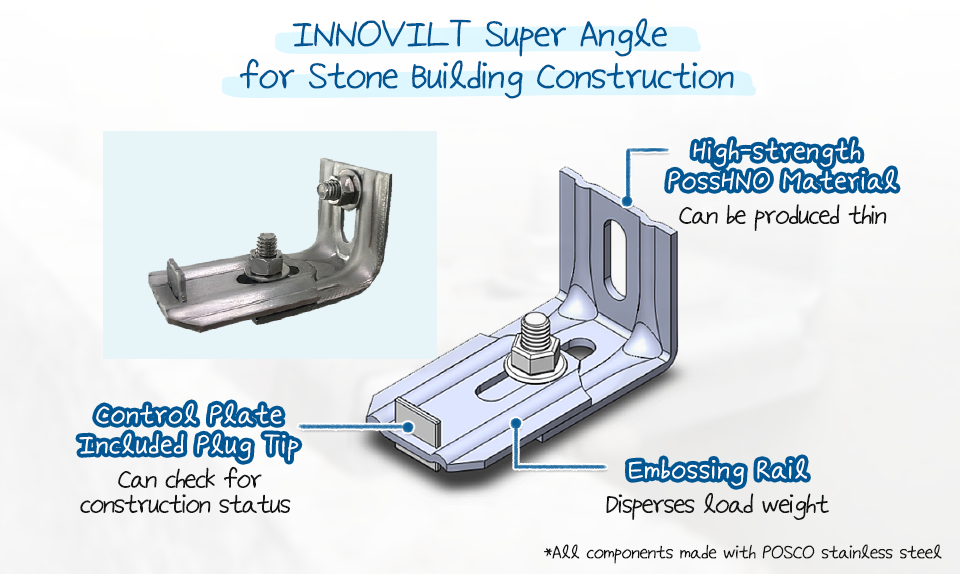 Some features of the INNOVILT Super Angle found on site were delivered to us. First, the workers who have used this product were surprised by the workability. The PossHN0 angle is 3.2mm thick, 36% thinner than the 5mm of conventional STS304. As the thickness decreased, the weight became lighter as well. Also, since the control plate moves only back and forth along the rail, there is no extra work needed to be done to straighten the product in case of side swinging. This was one of the reasons that actual workers regarded this product as convenient.

There is another reason why INNOVILT angles were chosen. And that is because of its economic feasibility. The INNOVILT angle adopts high-strength steel so it can withstand at least the same or more weight than the conventional angle though being much thinner. Naturally, material cost can be reduced by a whopping 15%. The fact that PossHN0 contains less nickel, a relatively pricey material, compared to STS304 also contributed to its economic advantage.

But the bottom line is this — no matter how convenient and economical the angle is, it can’t be used if its safety is not guaranteed. The INNOVILT angle plays its role in full in that regard. It even further ensures safety since the plug tip is integrated into the control plate so that it is possible to check whether the plug tip is installed during site supervision.