PosMAC, the best qualification, turns into a chameleon.

As “e-commerce” through online and mobile has become a trend due to Covid-19, warehouses are naturally increasing rapidly. In particular, the number of warehouses is increasing in the populous metropolitan area. I visited them myself because I heard that there are special warehouses.

As I left the Yangji IC in Yongin-si, Gyeonggi-do, saw a large building with purple and blue colors in the distance. From a distance, it looked no different from the other warehouses, but when I saw it up close, I could see the uniqueness of this warehouse.

My my oh my! The building, which I thought had only two colors from afar, was emitting a variety of colors, such as yellow, green, blue, and purple like a chameleon depending on the viewing angle and sunlight.

Yongin/ Yangji Distribution Center with ‘Chameleon Diamond Panel’ of M Steel LLC selected by the 3rd INNOVILT Brand Committee in 2020. M Steel’s chameleon diamond panel has a distinct feature that shows off many colors and is made of POSCO’s ternary alloy coated steel, PosMAC, with high corrosion resistance. The two distribution centers’ ordering company is Wonjin Logistics and the constructor is Seyoung Construction.

I wonder why a construction company Seyoung Construction adopted the ‘Chameleon Diamond Panel’ as its building material, and what the client, Wonjin Logistics thinks it’s good from the user’s point of view. 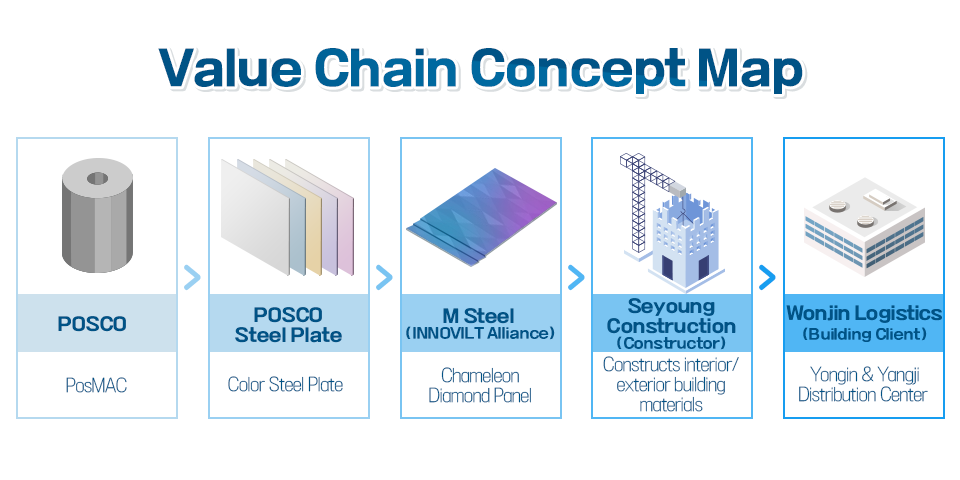 Constructors who dig the ground, lay the foundation, and build the building should consider various aspects, including specialized design, quality, construct-ability, workers’ safety, and more.

The constructor Seyoung Construction, a construction company specialized in building warehouses, not only considered the cost and construction period as top priorities for all material choices, but also considered maintenance as an essential factor, choosing materials cautiously.

Yongin/Yangji Distribution Center located in Yongin-si was ordered in turn-key base contract, whereas the contractor is responsible for both designing and building. It is a large distribution center that has cold-storage facilities, making 50 billion won scaled orders, unlike in the past when orders were about 10 billion won.

As demand for warehouses has increased recently, it has emerged as an asset that even considers leasing and operation in the long run, and the industry is also changing to the structure of preoccupying the location and use of warehouses in advance by institutions or large trust companies. As the value of assets is standing out, more and more people are trying to supplement their functions by using good materials rather than constructing only based on cost alone and have special characteristics of buildings for investors.

Jong-Mun Lim, director of Seyoung Construction explained, “If you look at other distribution centers around, there are a few buildings that have already begun to look faded and rusted 5 to 6 years after construction. The chameleon diamond panel is said to be resistant to corrosion by coloring the PosMAC, and guarantees 20 years of durability and even discoloration. That’s the reason why I chose it as an exterior building material.

It has become a definite differentiation by applying chameleon diamond panels to the exterior, improving durability with no wave phenomenon, and giving a solid appearance with various color changes. 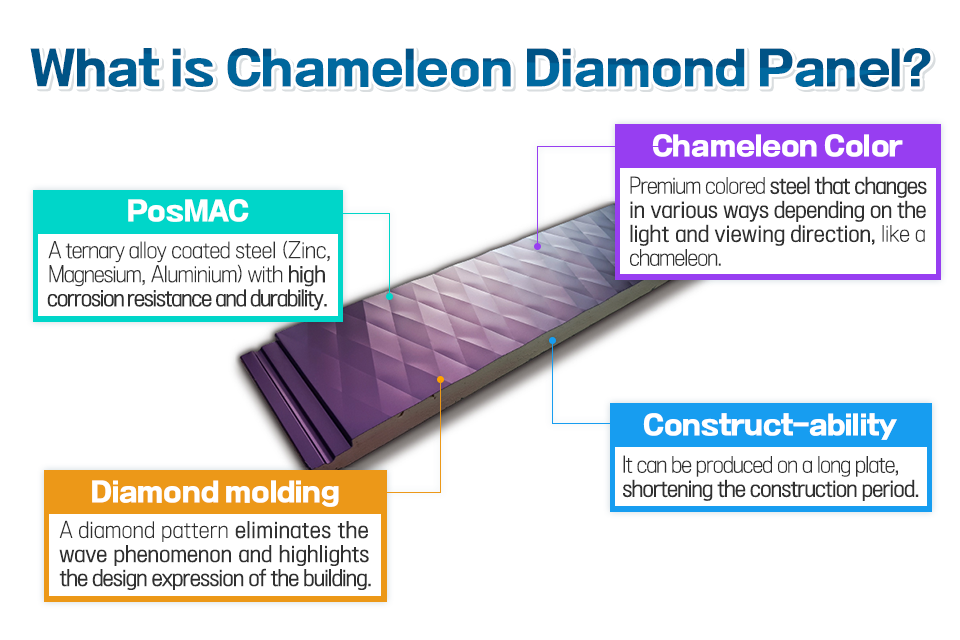 However, like two sides of the same coin, there are some bad things behind good things, the time for architectural review. Cities with a population of more than 1 million shall follow the colors set considering the aesthetics of the city under the Landscape Act.

Director Lim said, ”Since industrial districts in large cities usually prefer achromatic colors, it would have been okay if it were a general material but the reviewers and civil servants were embarrassed because it was metal color that was not well handled by them,” Lim said. “It could have been easier if a player with high recognition or high public confidence had moved, but we visited several times and kept explaining about the material to get an approval of using this material ” he explained the difficulty of the material approval process.

So far, more than 200 buildings have been applied with M Steel’s chameleon diamond panels, including warehouses, hotels, and coffee shops.

Gil-Soo Han, CEO of M Steel said, “Right now, our wish is to apply chameleon diamond panels to large warehouses in the northern port of Incheon, which are about to be built. It is particularly suitable for coastal characteristics (humidity, salinity, wind pressure, etc.).” “We plan to continue to apply chameleon diamond panels to the exterior of various buildings to make them new landmarks in each region,” he added.

l Build a distinctive identity with a differentiated appearance

Wonjin Logistics, the ordering company, had a thirst for a warehouse filled with their own distinction and identity while doing the logistics business and the moment they saw M Steel’s chameleon diamond panel, they thought, “This is it!”

Wonjin Logistics, a client who wanted a different characteristic from the existing standardized distribution center, used diamond chameleon panels instead of regular panels as exterior finishing materials and gave the distribution center an identity.

Wonjin Logistics said, “M Steel’s chameleon diamond panel’s color changing depending on light and angle of view was very eye-catching and we decided it after hearing that it was an INOVILT’s product that was officially proved to be excellent in POSCO’s raw materials.” “Thanks to its special appearance, it was born as a building where everyone looked back on, and we like it very much because it has an identity that reminds people of “Wonjin Logistics” when they think of that building even when they go down the street,” he said.

The result is complete satisfaction. Both distribution centers, which already have both large retailers, are successful in terms of operation and function, but they can also expect an increase in asset value as well.

Wonjin Logistics plans to additionally utilize the ‘Chameleon Diamond Panel’ as remodeling material for existing warehouses in order to have an identity of ‘Wonjin Logistics Warehouse’.

This M Steel episode is the result of INNOVILT Alliance’s efforts to pursue premium, the owner’s need to find identity, and the constructor’s need to make the drawing real.