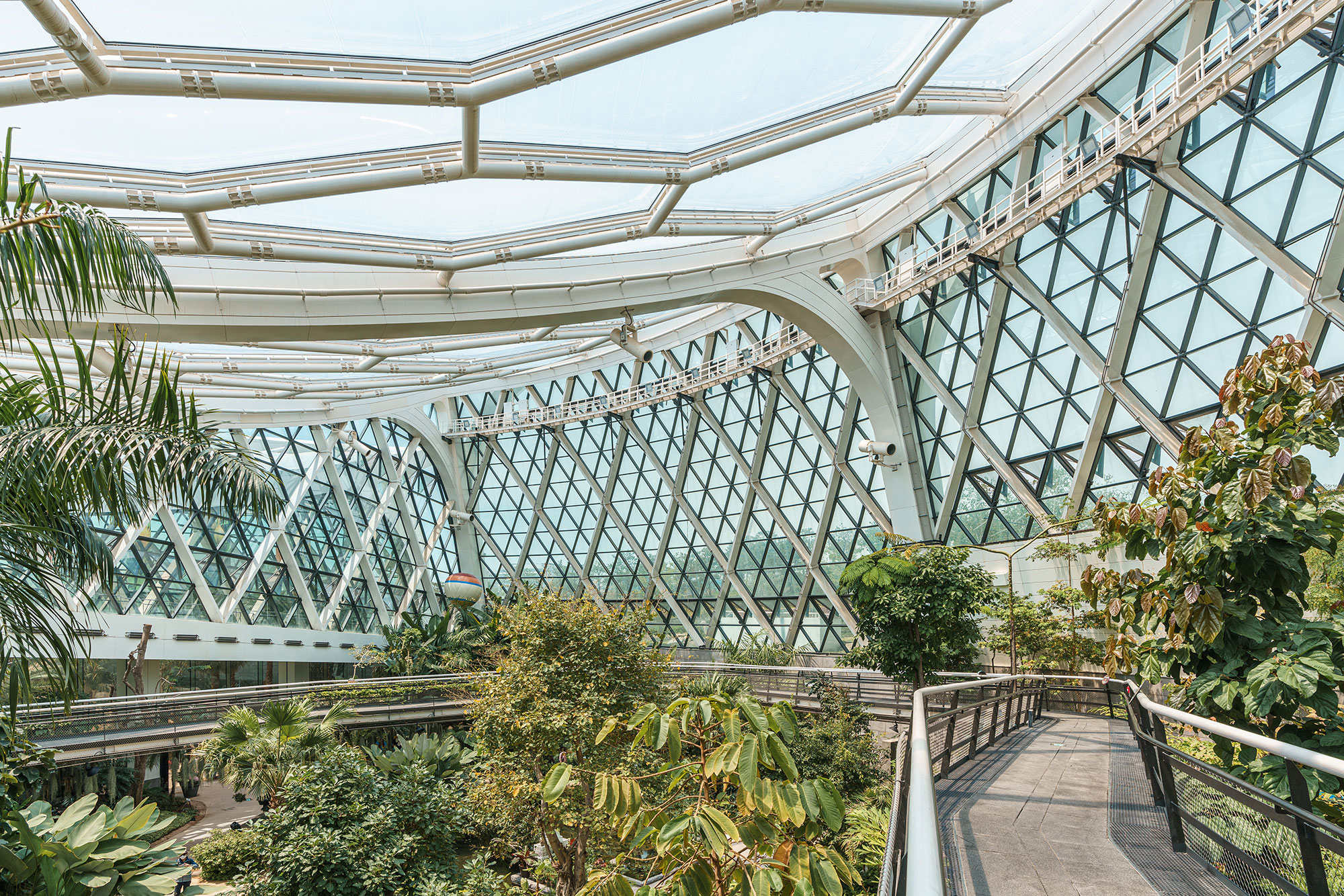 A large scale botanical park finally opened in Seoul. In 2008, the Seoul Metropolitan Government held a global design competition for the park and selected the Waterfront Plan of Samoo Architects & Engineers as the winner. Plans for its creation were announced in 2013, and after opening some parts in October 2018, the park was officially open to the public in May 2019. Due to the COVID-19 issue, the park was closed down temporarily following government guidelines, but it has resumed operation since July 22. The conservatory in the Botanic Park features a beautiful and unique appearance. It has become a so-called “hot place,” with a large number of visitors and much satisfaction from them since its temporary opening.

A Glass Conservatory that Presents an Exotic Experience

Seoul Botanic Park consists of Forest Field, Botanic Garden, Lake Garden, and Wetland, among which the Botanic Garden and Conservatory are key attractions. Upon entering the Conservatory, visitors can see and also hear water fall from above. A giant rubber tree and the Bodhi Tree welcomes visitors as they walk around this exotic space filled with tropical plants. Many people stand and take pictures by the pond at the entrance where you can see floating Victoria Water Lilies. As you stroll along the streamlined skywalk in the Conservatory, you are presented with the joy of discovering various plants. 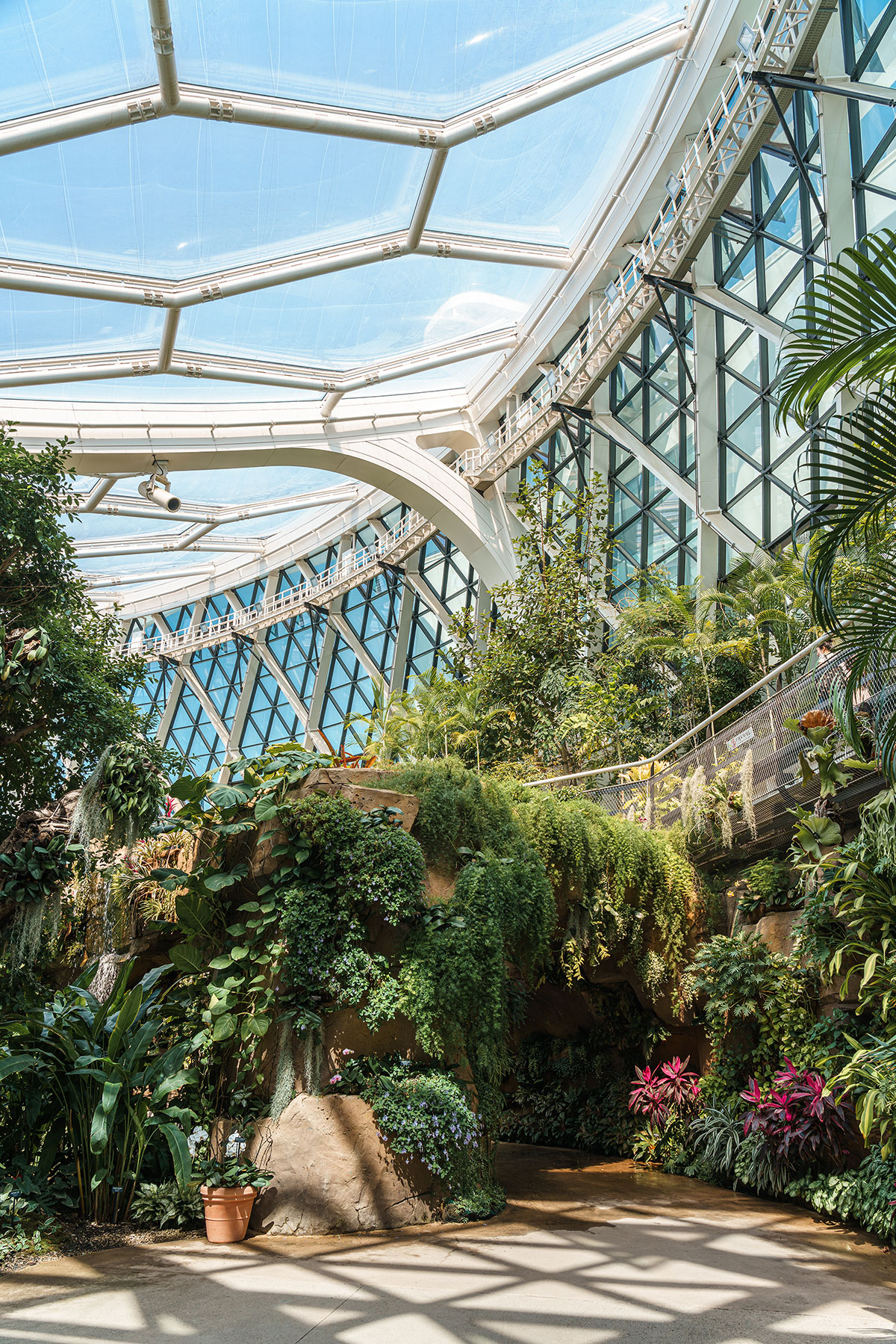 It is interesting to see visitors walk around this atypical space — made “artificially” and “futuristically” with the help of computer calculations from scratch to finish — as if hiking a mountain. A bridge with a gentle slope leads you to the second floor, where you can see the entire space from above. After passing through the Tropical Zone, you arrive at the Mediterranean Zone, where you can see olive trees, that reminds you of the Mediterranean Sea, and baobab trees from the “Little Prince,” that sparks your imagination. The exit is located at this end.

The Building Serves as a Mere Background for the Highlight, Plants

The Conservatory is a transparent steel structure constructed in a bowl shape, which is different from the frequently seen dome shapes, so it has a concave top, rising toward the edge. In a dome-shaped design, a rare and gigantic plant was usually placed in the middle of the structure. However, in the case here, the rim was elevated to make more use of the space as a whole. Eye-catching plants are arranged everywhere, apart from each other. Given the gigantic scale of the conservatory, — 100 meters in diameter and 28 meters in height — theming it into 12 different cities and installing an elevating skywalk as a path were inevitable. Nevertheless, this distributed design and layout enables a more vibrant and three-dimensional experience. The huge glass building is supported with ten white steel frames from the outside.

Chan-Joong Kim, director of The System Lab, was in charge of the design. He said that he wanted only the steel columns, which were the main structure, to stand out and make other elements unnoticeable. This intention is apparent on the exterior wall of the conservatory, where visitors come closer to than the white columns. A polygon of triangles and inverted triangles, repeating and intersecting themselves, forms the entire building without standing out excessively. The round outer wall is realized with 3,180 triangular windows, each with different shape and size, and some of them can be opened for ventilation as well. The material used for the outer glass wall reaching 5,654 m² is none other than PoSPACEs, a POSCO INNOVILT product. PoSPACEs is a high-performance product appropriate for constructing large-scale curtain wall with atypical designs, something previously challenging for conventional materials.

Director Chan-Joong Kim wanted only the blurry silhouette of glass to be visible from a distance. On mentioning his work with PoSPACEs material, he said, “Even though its profile was rather complex and designated individually, the PoSPACEs was manufactured with great precision. Its production was fully complete in the factory and required simple assembling onsite, so we could shorten the construction period and also reduce costs.”

Since the plan was to gather thousands of glass planes in three dimensions and slightly bend them to create a single round space, the material required for the challenge had to be one that fits the architect’s calculation exactly. The INNOVILT product, PoSPACEs, was probably the only option that met the specification — a material that could correspond with all different angles from top to bottom. The PoSPACEs that stretch out from the center in different directions was applied throughout the outer glass wall. Additionally, PoSPACEs is made of POSCO’s High-performance Steel for Architecture (HSA), which makes it possible to reduce the overall weight giving the structure a sleek and feathery look.

A visit to a botanic garden is more pleasant than one to a zoo. It’s a space where plants and humans are all equal. Visitors are presented with leisure and rest, while plants grow up well. A botanic garden acts as an institute for the preservation and research of plants as well. The many greenery and trees within the Seoul Botanic Park will live for a long time under the sunlight, winds, and water that come in through the triangular windows. Though it might seem too early to assess the achievements of this park, which has been open for just over a year now, the construction material utilized here has shown the possibility of a new spatial structure system and has certainly proved to be a true innovation.