Hit-Series Game of Thrones Inspires Fans to Hit the Anvil

HBO’s Game of Thrones is one of the most popular TV shows on air today. The finale for season 7 generated a record-breaking 16.5 million viewers in the U.S. The show also airs in 170 different countries around the globe, and in particular, Singapore saw a 50 percent increase in viewership from season 6 to 7, the Philippines had 47 percent more viewers and Taiwan saw a 24 percent increase.

Over the years, Game of Thrones has become more than just a show, but also a cultural movement, as fans have fallen in love with everything Game of Thrones related. As a result, HBO has partnered with numerous breweries to create special-edition beers, and the show’s jewelry designers even opened up their own online store. Another surprising consequence of the show’s popularity is the increasing number of people taking up an interest in blacksmithing to make replicas of their favorite swords and weapons from the show.

The Blacksmiths of Today

Although blacksmiths are rare to come by today, in the 18th and 19th centuries, they were a vital pillar of society. Blacksmiths hand-produced everything made of iron and steel, from pots and farming tools to swords and shields. They forged life’s necessities out of the hot metals, right up to the industrial revolution.

Traditionally, only young men were eligible to become blacksmiths once they completed a 7-year paid apprenticeship. Apprentices worked for established blacksmiths who would in turn house, feed and train them. Today, women can also become blacksmiths and there are various training and education programs available for aspiring blacksmiths. 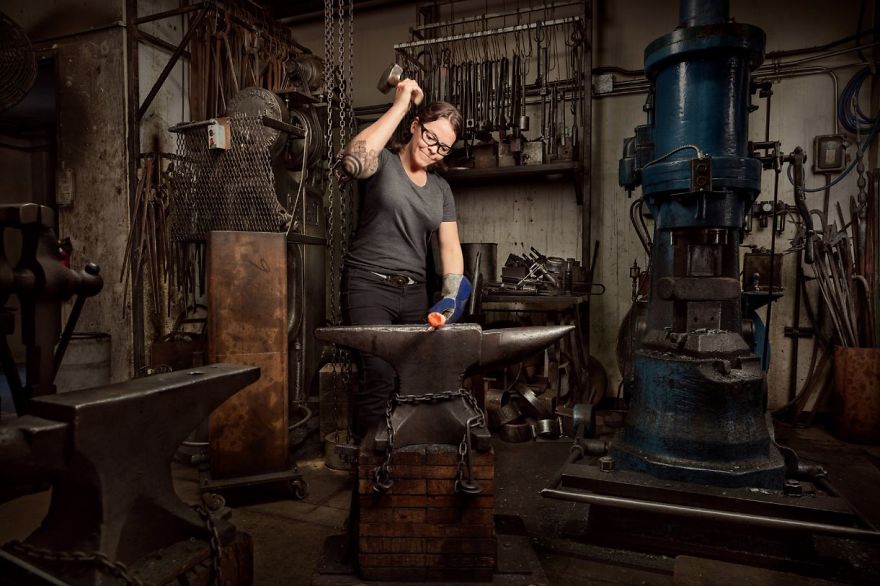 Modern blacksmiths do not hammer away to produce tools and weapons out of necessity, as machines are far more capable and efficient. Instead, they turn out beautiful pieces of art such as sculptures and unique knobs and bolts. And, the growing popularity of Game of Thrones has more young people pursuing the art as a hobby and a profession.

The Artist Blacksmiths Association of South Australia has reported a growing number of young adults who want to take up the art as a result of the show’s growing popularity. Most of the props in movies for war scenes and superheroes are crafted by hand, and fans want to replicate their favorite characters’ swords, shield and armor.

So, for all you Game of Thrones lovers, or just plain ol’ steel junkies, here are the basics to get started in the craft. Get a piece of iron or steel, heat it, pound it into shape and cool it down. It sounds simple, but it takes a whole lot of sweat, patience and know-how to do it right.

Having a good source of heat is vital for blacksmiths, and most opt for a coke or propane forge (or oven). Steel is heated repeatedly to make a single object, so blacksmiths have a forge that is always hot and ready. Blacksmiths also commonly use an acetylene torch to apply heat to isolated areas to achieve specific designs. 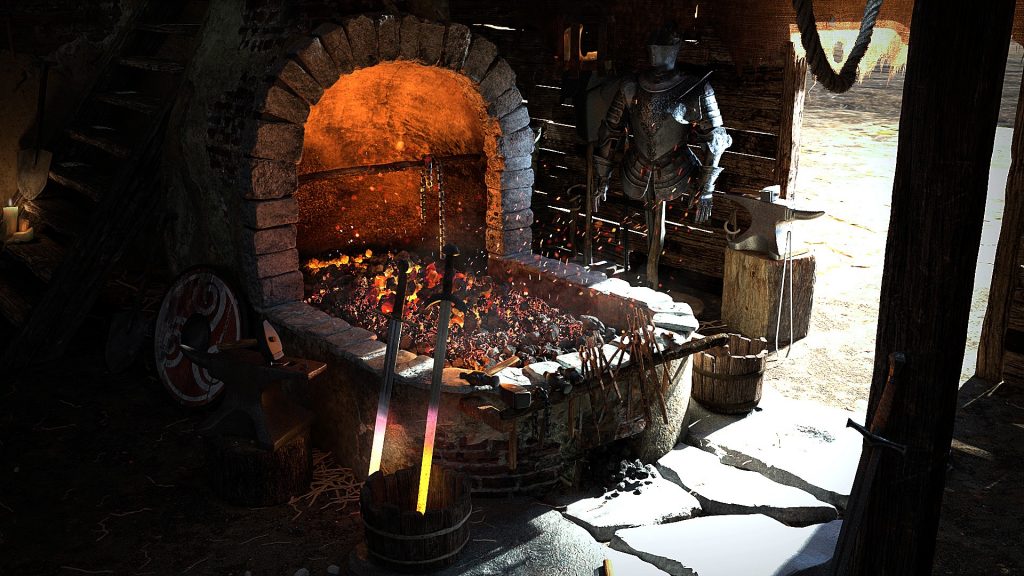 An anvil looks like a big block of steel, and its the bedrock on which blacksmiths create their masterpieces. The quality of the anvil will affect not only the quality of the final product, but also the amount of physical labor required by the blacksmith. Tool steel is one of the best kinds of anvils available as it is extremely hard. Instead of absorbing energy from the blow of a hammer, it forces the energy back up the piece of metal being worked. 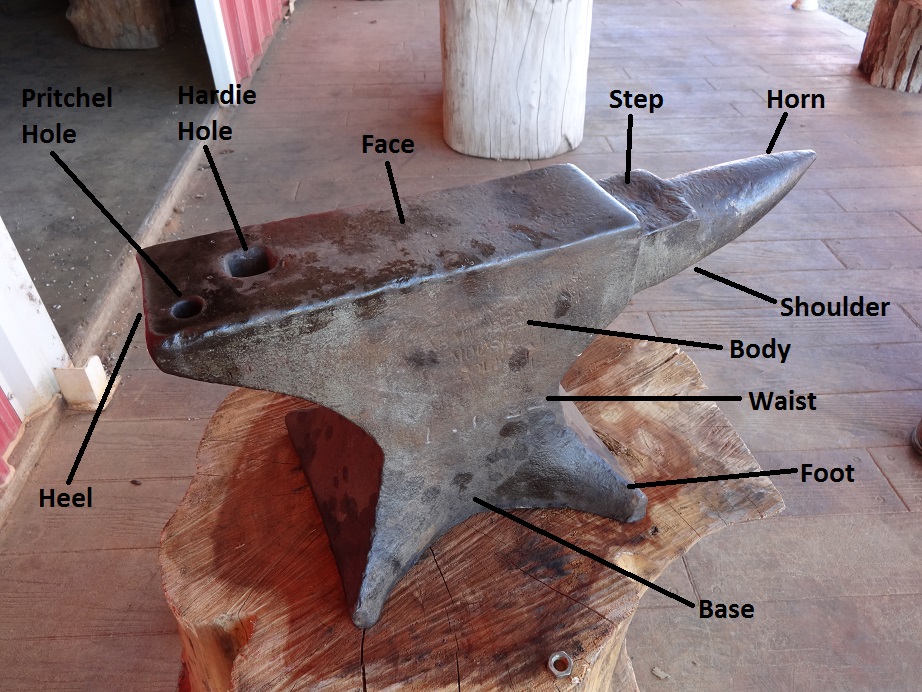 An anvil serves many different functions. (Source: The Consumer Dabbler)

Besides providing a flat surface, or face, for blacksmiths to pound away on, an anvil has many different features and functions. Blacksmiths also use the anvil to cut, shape and hold the piece of steel being worked along with tongs and clamps.

The actual “work” entails a lot of hitting, but in a very calculated and practiced way. Blacksmiths use different types of hammers to pound the metal into various shapes. The 3 most basic techniques are drawing out, upsetting and peining. Drawing out a piece of hot steel means to make it longer by hammering the sides. Upsetting refers to adding force to one end of a hot piece of metal to add volume. Piening means to hammer the piece of steel to move it in a particular direction or to spread it out thin. Blacksmiths use tongs or other specialized tools to hold down the hot steel on the anvil while hammering and working the steel into shape. 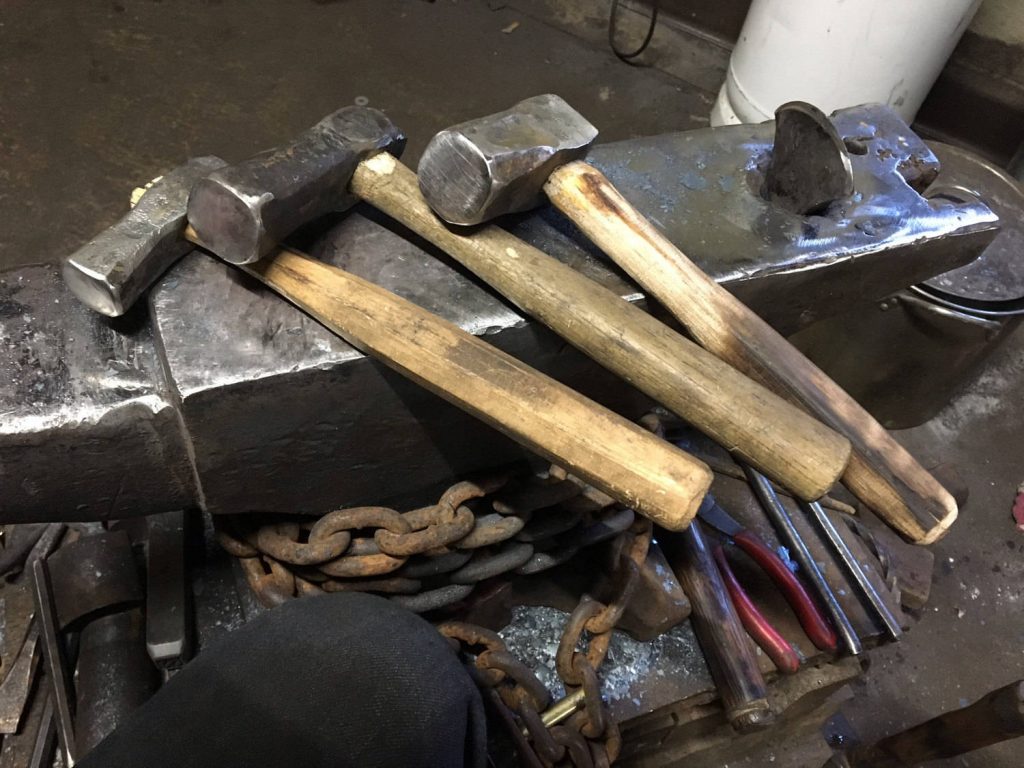 After countless cycles of heating and hitting, the blacksmith will end up with the desired shape. The final step is to dip the work into a bucket of cold water to cool and harden the steel. 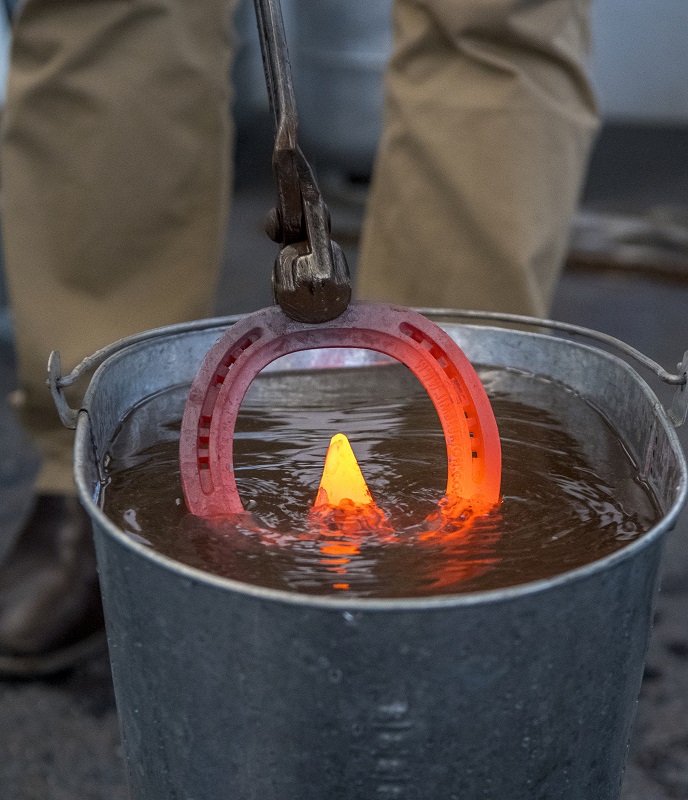 Dipping the hot steel in cold water to cool and harden the steel is the final step. (Source: Horse Journals)

With the above basics, and all the accompanying safety gear, anyone can pick up the craft as a hobby to create unique pieces of steel art, or replicas of the greatest swords of Westeros.