February is the month many cultures around the world celebrate Valentine’s Day. In the spirit of love, we’ve found some of the most interesting heart-inspired sculptures.

Heart of Steel by Julian Voss-Andreae

Inspired by his background in science, Julian Voss-Andreae is a German sculptor based in Portland, Oregon. He began his artistic career as a painter, but later changed directions and returned to study physics, mathematics and philosophy at the Universities of Berlin, Edinburgh and Vienna. Voss-Andreae completed his graduate studies in quantum physics, then moved to the U.S. to study sculpture, graduating from the Pacific Northwest College of Art in 2004.

Voss-Andreae’s work, showcases his background in science, and has been commissioned for multiple institutions and collectors around the globe, including several universities. He has also been featured in print and broadcast media worldwide. 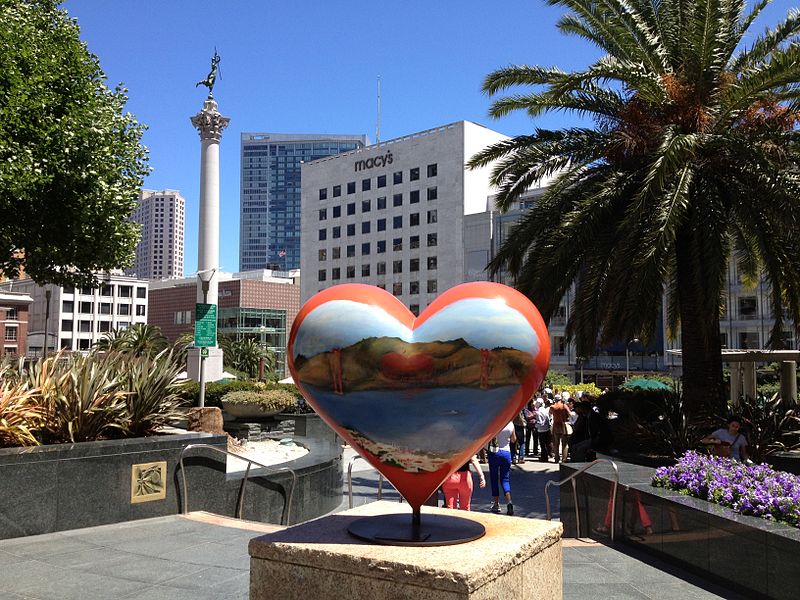 The Hearts in San Francisco project began in 2004. One hundred thirty-one heart sculptures created by local Bay Area artists, were displayed for three months until they were auctioned. The project raised almost $2 million for the San Francisco General Hospital Foundation, as well as a new level of exposure for its mission of providing life-saving care to anyone in need, regardless of ability to pay. 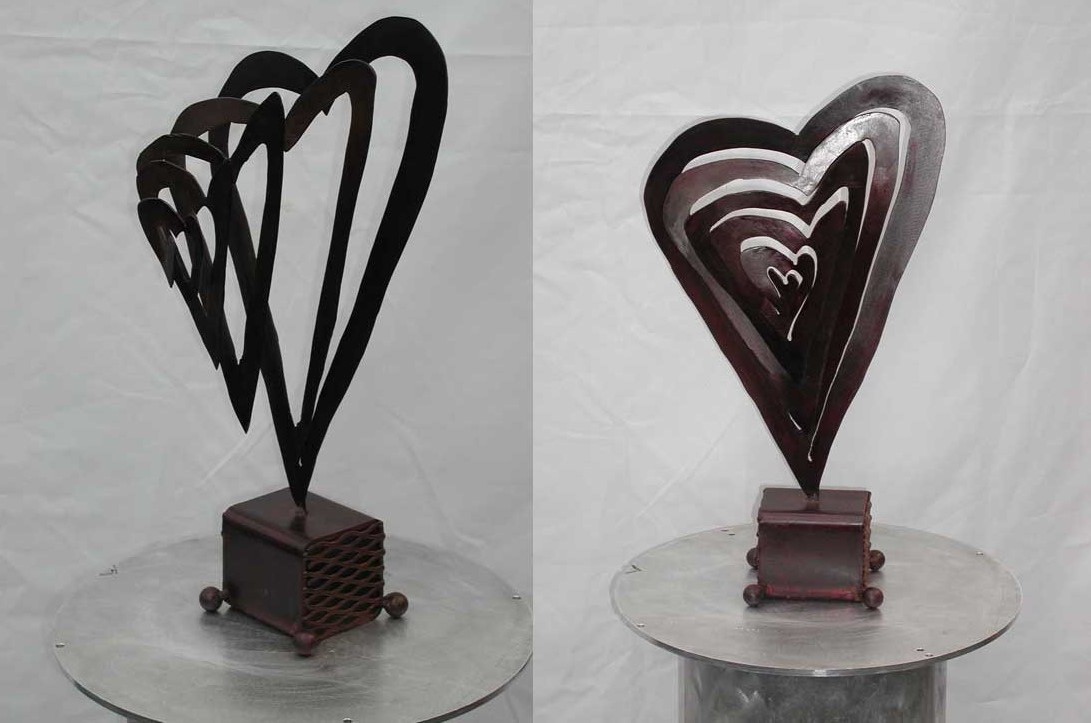 This is a contemporary tabletop metal sculpture created from recycled metal. This heart art is cut out of one piece of steel, which is pulled out to make the heart appear to pop out at the viewer.

Kristen Hoard began sculpting with metal in 1999. Based in Sacramento, Hoard participates regularly in art festivals throughout Northern California and exhibits in local galleries. Inspired by her experiences at Burning Man, Hoard now experiments with sculptures that incorporate the use of fire, flames and neon lighting. She has also completed several large corporate logo metal sculpture pieces displayed around the Bay Area. 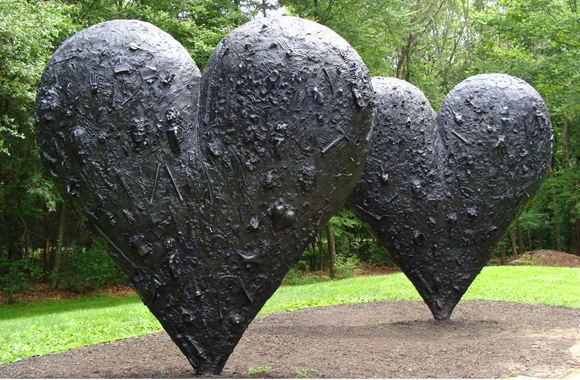 Though Jim Dine was influenced as a young artist in the 1960s by pop art, his work draws significantly from abstract expressionism. For his piece, Two Big Black Hearts, Dine has incorporated casts of various objects, including hands, faces, seashells, hammers and other tools into the surface of the sculptures two large hearts. While this may appear to be a random combination of objects, Dine put great thought into the objects to use. The tools represent childhood memories; his grandparents owned a hardware store.

The heart is significant in whole context of Dine’s work, he has returned to this image throughout his career, using it as a backdrop for his expressions. This diverges from the traditional style of pop art, and Dine focuses on turning objects into emotion. He works in several media, ranging from painting, drawing, and mixed media to sculpture, photography, book illustration, and printmaking. Dine often utilizes mixed-media and collage techniques. His own personal items, such as his own clothing, shoes, and tools, become a part of his canvases. The artist now lives and works in New York and Vermont. 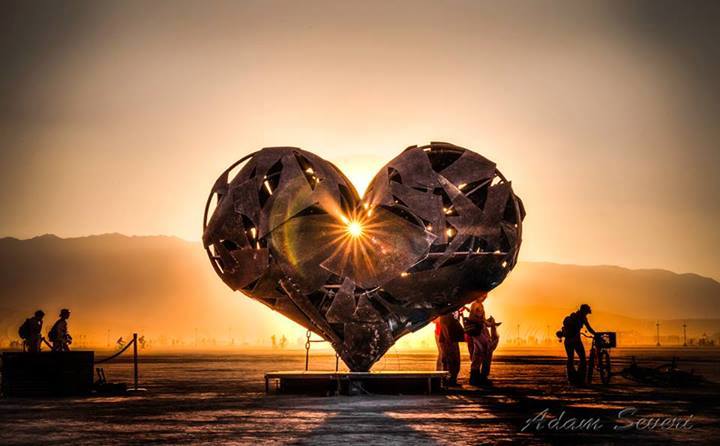 Katy Boynton hopes to give hope through her Heartfullness project, which embodies the idea that even if our hearts are damaged, they can heal again. Heartfullness is a 12 by 15 foot steel burning heart. The transformed heart features fire elements that are controlled by pulling on its heartstrings. The flames can be viewed from outside, and from the cozy love seat made of woven rope inside the sculpture. The interior skeleton is made of steel, and covered by reclaimed sheet metal representing a reconstructed heart. The sculpture is complete with red LEDs that follow the beating of a heart on an audio file.

The sculpture debuted at Burning Man in 2012, and continues to be exhibited. Katy also creates stainless steel jewelry depicting her Heartfullness theme. 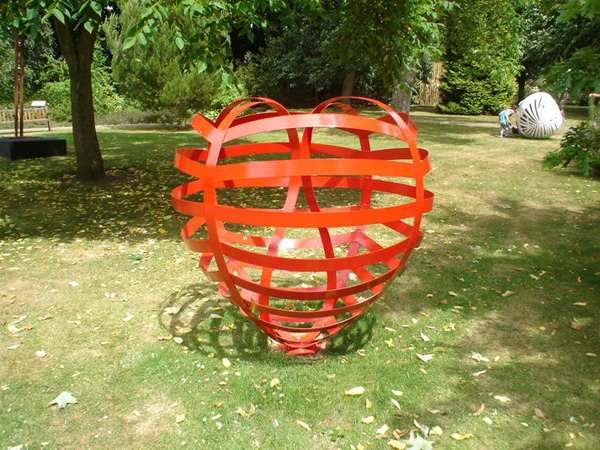 The Stranded Heart sculpture by Diane Maclean was donated to the University of Leicester by an anonymous party to support the Cardiovascular Research Centre (CRC) at the Leicester Glenfield Hospital. Cardiovascular disease is one of the major causes of illness and death in the UK, taking the lives of over 198,000 people every year.Diane Maclean works primarily with steel and stainless steel on a large scale and has exhibited her work widely in the UK and around the world.