The Future of Transportation Will Transform the Way We Travel

The way we move and products is changing. Transportation is becoming automated, connected, and much, much faster as the wild, unthinkable ideas of science fiction novels are becoming real. Multiple industries are coming together, led by some of the most influential people in Silicon Valley. This will reshape the way we move goods and people and their influence will be needed as they face multiple barriers.

Take a look at three of the ways transportation is restructuring itself for faster, more sustainable travel. Some are closer to realization than others, but all of them are changing the way we think about movement. When realized, all of these ideas will have an impact far beyond what we can see now.

An Idea by Elon Musk

In 2013, Elon Musk came up with the idea for the Hyperloop as he grew frustrated with the high-speed rail being developed in California at that time. He called it “both one of the most expensive per mile and one of the slowest in the world.” Musk said, “It would be great to have an alternative to flying or driving, but obviously only if it is actually better than flying or driving.”

He imagined capsules, zooming by at speeds faster than any train or plane, that would allow him to get to San Francisco from LA in 35 minutes. The basic concept was that the capsules would float through partially evacuated steel tubes propelled by fans and electromagnets. Because there would be less friction from air and rails, there could be significant increases in speed and durability, while decreasing reliance on fuel at the same time. 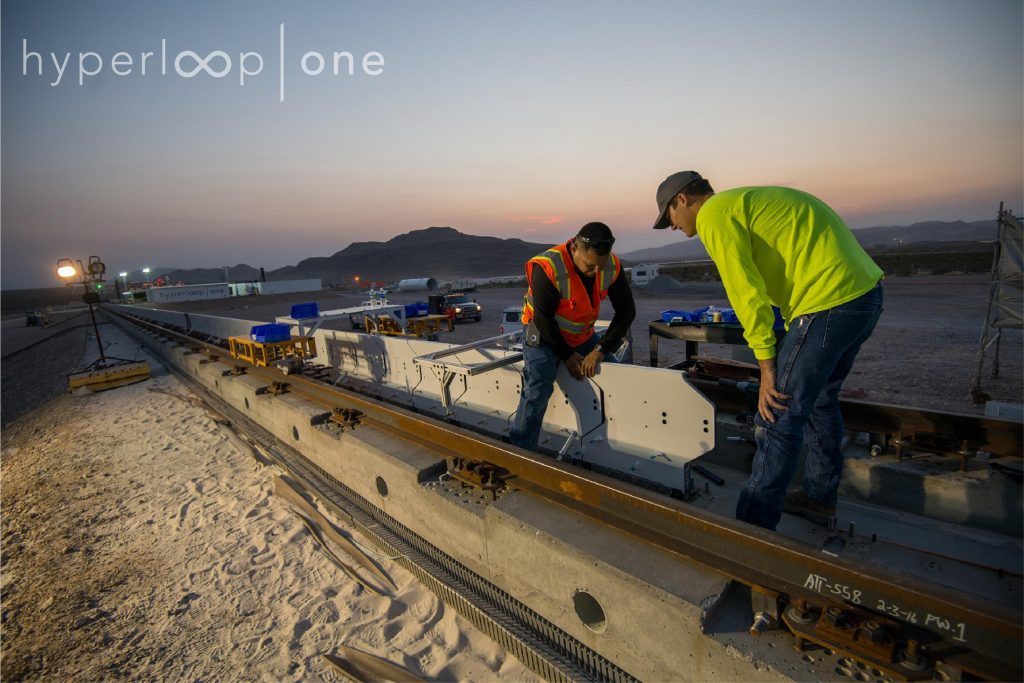 Workers install Hyperloop’s stator blocks at our test and development site in North Las Vegas. (Photo courtesy of Hyperloop One)

Because Musk was so involved transforming the space industry with SpaceX, the auto industry with Tesla, and the energy industry with SolarCity, he did not seem to have much time for Hyperloop. So, he developed a 58-page outline of his ideas and left it to others to develop. And they have.

To fulfill this improbable dream, a handful of startups have stepped in – one of them being California-based Hyperloop Technologies. They have been building a test site, called DevLoop, 30 minutes outside of Las Vegas in the Nevada desert that was unveiled last week to the public. According to their press release, DevLoop is a 500-meter full-scale Hyperloop test structure weighing over one million kilograms. The Hyperloop One tube measures 3.3 meters in diameter and they are expected to perform their first full test sometime in the first half of 2017. 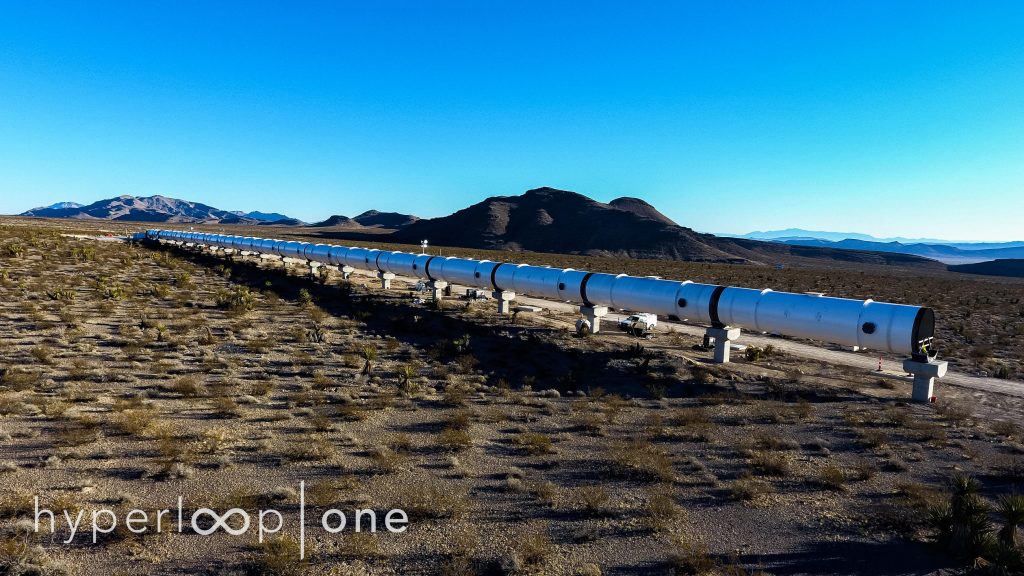 Hyperloop unveiled its first test site, the DevLoop on March 7. Later this year, they will run their first test of the Hyperloop. (Photo courtesy of Hyperloop One)

In November, Hyperloop Tech signed an agreement with the Dubai Roads and Transport Authority to evaluate building a Hyperloop between Dubai and Abu Dhabi. When completed, a commute that once took several hours will take just 12 minutes.

All parties involved realize the costs are going to be high. Creating a new form of transportation infrastructure is not simple and building large steel semi-vacuum tubes over ground (or under) is technologically difficult requiring trained engineers and highly skilled workers. To offset this, Hyperloop Tech is focusing some of its energy in attracting industrial freight clients.

The Future of Freight

One of Hyperloop Tech’s Transportation Economists, Dapeng Zhang, recently presented on transformational freight explaining that their “vision at Hyperloop One is to connect cities into mega-regions, and turn metro areas into metro stops. This will inevitably improve the efficiency of freight supply chains. By connecting two distant metros, Hyperloop One creates a geographical cluster which could help reduce inventory costs, promote even more just-in-time strategies, and expand same-day delivery service areas.” 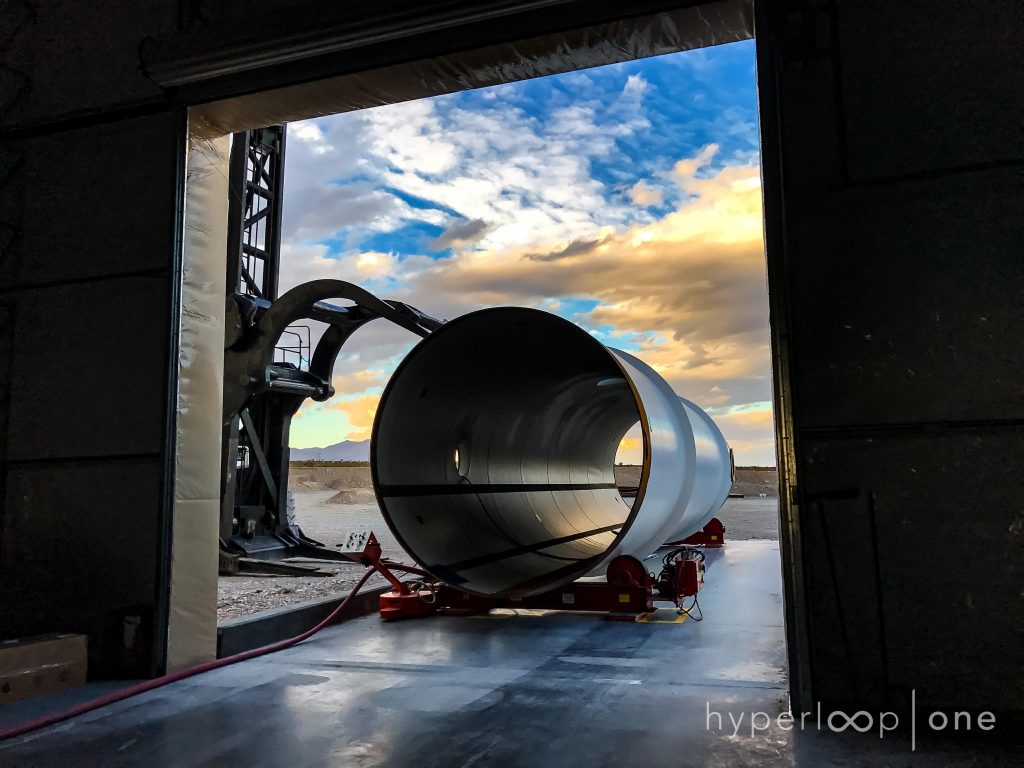 A Hyperloop steel tube awaits entry into the tube processing building, where they are painted and prepped for use. (Photo courtesy of Hyperloop One)

Whether or not this is completely feasible is still up for debate, but it is exciting to see the strides being made in this type of supersonic transportation technology. Other developments such as electric cars, autonomous vehicles, and SkyTran (below) will help us move short distances, but ideas like the Hyperloop are needed to connect the larger metropolitan areas.

Apart from the Hyperloop and autonomous driving technology, other personal mobility developments are being made. One of those is SkyTran, a company working to develop a personal rapid transit system that carries people in autonomous pods. Located near Mountain View, California, SkyTran has focused its efforts on relieving congestion in cities by creating a system that rides on an elevated monorail. It is both quick and efficient, and unlike the Hyperloop, it is nearing completion with plans to open in Israel, Nigeria, and France.

This concept image shows a drop-off point for one of SkyTran’s capsules. (Photo courtesy of SkyTran)

Using what is called maglev technology (magnetic levitation), the SkyTran uses electromagnets (similar in concept to the Hyperloop) to propel itself forward (up to 155 mph) while using little to no electricity. SkyTran says that when the pod reaches 10 mph, it can continue to glide and accelerate without any extra power. SkyTran’s CEO says the pods can on the same amount of electricity as two hair dryers.

SkyTran capsules are elevated above the city streets avoiding traffic and giving them the freedom to move at high speeds. (Photo courtesy of SkyTran)

In addition to being highly efficient to operate, SkyTran benefits in its low upfront costs. Unlike the Hyperloop, which requires rather large infrastructure and maintenance costs to ensure proper functionality of the pipe’s vacuum and propulsion system, SkyTran is projected to be a much more economic option. Because the system is set up above the streets, its footprint is small – requiring only an 18-inch steel pole to hold the steel and aluminum capsules.

The company estimates that it will only cost about USD 13 million per mile to build, compared to a subway system that can cost around USD 160 million for the same distance. Because of the low upfront costs, SkyTran believes that malls, hotels, and other private businesses will want to build their own offshoot lines – not only for their customers but because it will be profitable.

Autonomous, connected, electric. These are the common buzzwords that come to mind when we think about future trends in personal transportation. At CES earlier this year, seemingly everyone had their own solution to made driving cars more connected and safer, and with less human involvement.

Nissan and BMW unveiled plans to use Microsoft’s personal assistant technology, Cortana, with their cars. Honda became the first major manufacturer to develop an electric concept car specifically designed for ride-sharing. And as for self-driving cars – Nissan announced it would bring autonomous driving support to its Leaf electric car, Hyundai introduced one that would be affordable enough for the masses, and Audi announced a partnership with Nvidia to bring self-driving cars to market by 2020.

At the 2016 North American International Auto Show (NAIAS), POSCO showcased its advanced automotive steel products that are both strong and lightweight, making them uniquely suited for the electric cars of the future.

The weight of POSCO’s advanced auto steel is about 26.4 percent lighter compared to that used in most mid-sized vehicles. But despite being lighter, it received the highest level possible ratings from Europe and North America’s automobile collision evaluation Institute, Euro NCAP and IIHS.

In addition, the Life Cycle Assessment (LCA), which measures the amount of CO2 discharged throughout the entire life cycle from material production to recycling, showed that emissions from the internal combustion engine body were 50 percent lower. Electric car emissions were also decreased by about 9 percent.

The displayed products included the new PosM Steel and hot press forming steel (HPF). PosM Steel is a “dream material” for car manufacturers because it is five times stronger than other steel in terms of machinability while also having an impact absorption of up to 100 kg per mm². While many steelmakers have been developing PosM Steel type steel, it has never been produced on a commercial scale before. In addition, POSCO’s HPF steel is stronger than many other steel alloys making it a good solution for manufacturers looking to improve car safety.

POSCO currently supplies advanced auto steel sheets to car and component manufacturers, including Toyota, Volkswagen, and GM. POSCO has 10 automobile production plants and 24 machining centers around the globe. In addition to providing its World Premium Products, POSCO also provides Solution Marketing services that offer customized technologies developed in-house (such as welding and molding) that are customized to fit a customer’s unique needs depending on the product and manufacturing process.

Innovations in the transportation industry require big ideas, big investments, and new technological advancements. Right now, all of these seem to be coming together for what is expected to be some big changes. If the investors at Hyperloop and SkyTran have their way, pretty soon we will be able to travel across Europe on a Hyperloop, transfer to a SkyTran, and arrive in our hotel in less than an hour.

*Cover photo courtesy of Hyperloop One.