One can associate San Francisco with the Golden Gate Bridge across the ocean, trams running up and down the steep hills, sunny weather and romantic, vivid energy. While the suburban areas are filled with prominent universities like UC Berkley and Stanford, there are many regions for research and technology such as Silicon Valley, the birthplace of Apple. These regions are mostly located in satellite cities – San Francisco, Sausalito, Berkley, and Oakland – that are placed within 100km of the San Francisco bay. As a metropolitan of San Francisco, these areas remain as a solid foundation for economic, cultural, and educational developments. With such contrasting charms, San Francisco was able to achieve its current scale and lifestyle through the steel wire that is only slightly thicker than a strand of hair. How many people would be familiar with this information?

Cable Cars Gripped on Underground Steel Cables
San Francisco is a city with exceptional quantities of steep hills, which are not relatively common in other cities in the U.S. In the early 1900s, when automobiles were not common, pedestrian roads, bicycles, and horse carriages were everything on the street. As the city expanded, increasing number of buildings had to position over the hills while the distance for horse carriages also extended further. In fact, on rainy days, some horses slipped and sometimes died from terrible leg injuries. Such limitations in transportation stagnated quantitative development of the city.

In 1869, Andrew Hallidie witnessed the situation and proposed a cable car that grips on steel cables that are installed on the street. The first line of the cable railway started its construction in 1873 and started operating 3 years later. The operation power at the time was a steam engine, which now have changed to electricity.

There are three tracks on the cable car railway; two tracks on each sides are for cable car wheels and one in the center is for the steel cable. This central track has a space underneath that makes the steel cables flow restlessly in the speed of 15km per hour while making a clamorous sound. Interestingly, the steel cable consists of small steel wires twisted together. To be specific, 19 steel wires of 2.5mm- diameter form one medium size bundle. And six of those medium size bundle make one large steel cable of 3.2cm-diameter. The wires are twisted in a spiral to maximize cohesion among them. Also, to protect the wires and cables from friction with surrounding materials, they are greased amply. These cables are changed every 6 to 8 months.

The cable car system has been running for the past 140 years. Though the power source has been changed from steam engine to electricity, the cable cars – packed with people and luggage – are always traveling throughout the city while providing convenience and extending the city. In fact, the cable cars which allow people to indulge in a vivid and romantic scenery, have been made from a tiny steel wire of 2.5mm-diameter.

In 1929, the world economy faced the Great Depression. Especially, the Golden Gate strait separating the city of San Francisco and Sausalito, restricted nearby cities to interact, leading to limit balanced and holistic development of the cities. Therefore, the general public suggested to create a fundamental frame of city development, resulting in construction of the Gold Gate Bridge – a 2.7km-long suspension bridge between the city of San Francisco and Sausalito.

However, circumstances were not idealistic. The bridge construction had to manage the deep sea level of the San Francisco Bay and the bridge deck had to be installed high enough for large ships to pass through. On top of its notorious reputation for its thick fogs and fierce current, the location is a strategically important location for military purposes, which does not allow any possibility of blockade of straits due to possible collisions in the area.

The suspension bridge system was the final proposal chosen to satisfy the tough conditions. Rather than requiring to place a bridge post in the center, the suspension bridge has bridge post on each end, and the bridge deck hangs perpendicularly on the cable placed on each bridge post. Therefore, its structural functions were maximized by minimizing the thickness and ultimately provided enough height for shipments to travel through.

However, the problem was about building the main cable and the bridge deck with the level of technology and given conditions at the time. In order for the main cable to sustain the weight of the bridge deck, pedestrians and vehicles, a large sized steel of which cross section is 92 cm in diameter was needed. At that time, it was impossible to transport a colossal steel structure of the corresponding size. As a result, it was proposed to use a thin steel wire – slightly thicker than a strand of hair – to make transportable bundles and repeatedly crisscrossed them in between the main posts.

Accordingly, 452 steel wires that are 5.2mm in diameter, were twisted as one bundle, which is 11cm in diameter. These palm-sized bundles are crisscrossed between the two main posts to make even bigger bundles. 61 of these bundles make the upper cable structure which is 92cm in diameter. For the final process, these bundles are knotted regularly and a corrosion-proof steel cover tops the bundles. In total, there were 27,572 wires used. Since a single cable requires 128,748 km length of wires, the total length of the wires used for two cables can presumably rotate the earth 6.5 times. The highest point of the post is about 227m from the water level and is about 67m from seawater. 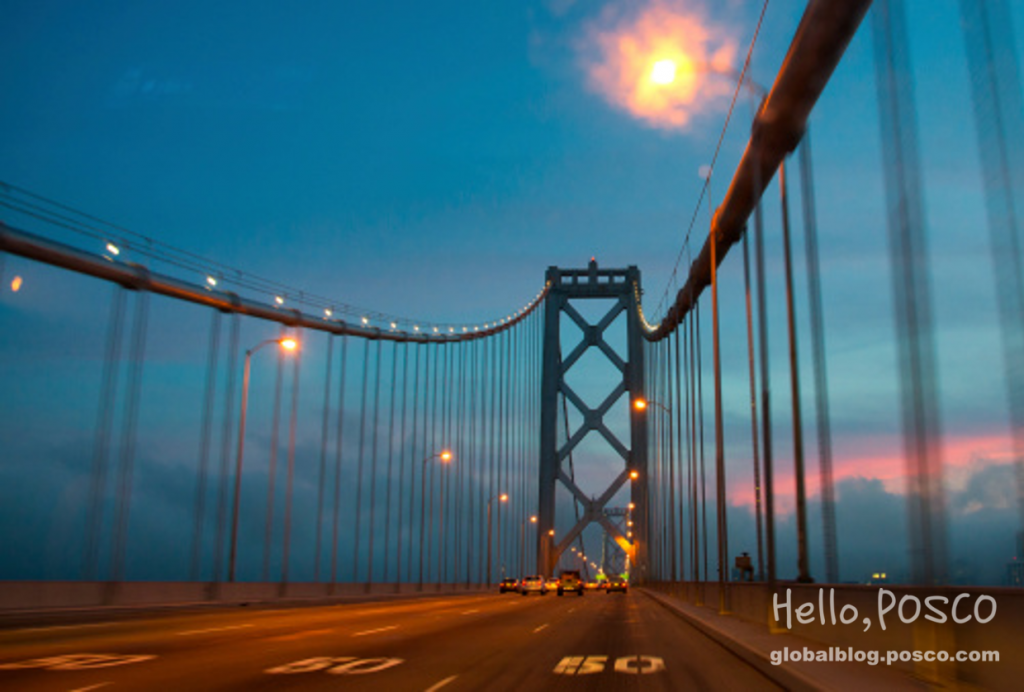 The total length of the Bay Bridge is 13.5km long and is divided into eastern and western by Yerba Buena Island in the middle. Constructed by C. H. Purcell in 1936, the Bay Bridge, is about five times longer than the Golden Gate Bridge. This bridge has a double-decked structure, of which the lower deck used to be for trains, and now both decks are used as one-way roads for automobiles. The bridge decks are 150m above water level, allowing ships to travel through flexibly. The Bay Bridge was built with Cantilever method, which used a mobile work vehicle rather than a connected pan of the deck. This method is known for its economic efficiency in valleys, rivers, oceans, and areas with high traffic. The Bay Bridge now has more than 250,000 vehicles passing through every day.

San Francisco has everything that a modern city requires. Today, San Francisco has grown into a city that is powerful enough to influence the world economy. It maybe, the hair-thin steel wires that enabled this city to achieve such developments in quality along with its miraculously beautiful scenery.