Steel is everywhere. Even musical instruments can’t escape the firm grip of steel. From piano, guitars, to drums, steel knows no borders, and it embraces all genres. What’s more, innovative materials like steel often change the course of history.

In music, that was rock and roll. Not only did steel get the ball rolling for the genre, but steel also paved the way for the beginning of rock and roll — it was also right there on center stage when the genre reached its pinnacle — and it still is.

Let’s find out what steel did for rock and roll, and for the world — POSCO Newsroom presents worldsteel, “How Steel Helped Usher in the Era of Rock and Roll.”

From its use in acoustic steel guitars in the 1930s, to modern pick-ups and guitar strings, steel has played a central role in the evolution of popular music

By providing the technological leap that made rock and roll possible, the electric steel string guitar changed music forever. The unique sound created by the magnetic pickup device at the heart of the instrument, combined with its steel strings gave rise to a new wave of musical expression.

From rock-a-billy to punk, progressive, hard and just plain rock, it is the reverberations of a steel string electric guitar that made all these variations possible and played a hand in creating iconic songs the world over.

Stainless steel strings, which entered popular use in the 1960s, are known for giving guitars a clear, bright sound with plenty of sustain

While the skills of such musical luminaries as Chuck Berry, Jimi Hendrix, and Keith Richards can seem otherworldly, the true magic behind the electric guitar are the magnetic fields that make it work. Key to this is the ‘pickup’ – a permanent magnet with a wire coil wound around it that is fitted to each electric guitar.

The pickup magnet’s north pole faces outwards from the guitar body, magnetising the steel strings suspended above it. The strings in turn become magnets themselves, with their magnetic field in alignment with the permanent magnet. The steel string is absolutely integral to the workings of the electric guitar and, when plucked, the strings’ magnetic vibrations are converted into an electrical signal for the amplifier using the pickup.

The all-important pickup was created in 1931 in Los Angeles when an electrical instrument company wanted to see how they could amplify a guitar’s sound electrically. The steel guitar was already in existence and was played on the lap, but the sound produced was not loud enough to be heard by large audiences. The solution? To develop an electrified steel string guitar.

The first ‘electrical stringed musical instrument’ was patented in the US in 1937, and was the work of George Beauchamp, a musician and general manager of the National Guitar Corporation, and Adolph Rickenbacker, an electrical engineer. In the early years after the invention of the pickup, however, electric steel guitars were still played on the lap.

At the beginning of the electric steel guitar’s history it was mainly played for jazz, swing, folk, Hawaiian and country music. “It goes a long way back in popular music, the idea of the steel guitar,” says University of Surrey music lecturer Doctor John McGrath. The rock and roll sound was yet to come, but with the technology in place it was just around the corner. 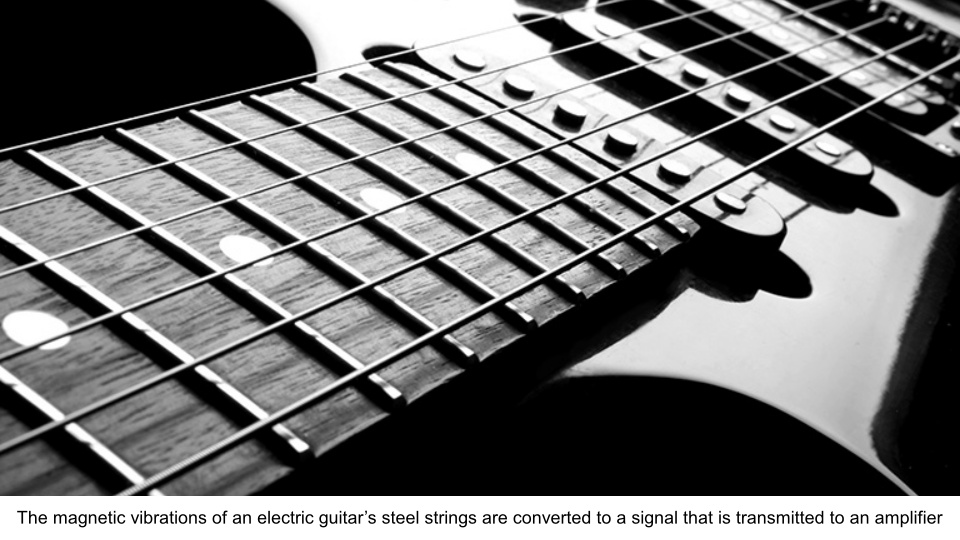 l The String Is the Sound

The ‘soul’ of the electric guitar is in its magnetised steel strings, and the different combinations of shape and material massively impact on the kind of sound generated. When they were first introduced, steel-core strings were thinner in diameter than nylon or gut strings, which were typically used for acoustic guitars. Today, acoustic guitars also use a steel core string, though it has a bronze outer layer to provide a softer sound.

Like any wire, guitar strings are formed through the extrusion process. Here hot or cold steel is pushed through a die with a hole at its centre of a particular diameter depending on the size of wire, or string required. The tensile strength of steel also allows for very thin strings that can provide a particular sound for guitarists.

Back in the 1930s, string manufacturers opted for steel with a corrosion-resistant zinc coating, and this material choice of a thin steel string lasted unchanged for decades. In the 1960s, however, artists such as Eric Clapton who were interested in blues rock, wanted even thinner strings, “to bend the note to get more of a rock effect,” McGrath explains, and so they took steel strings off banjos.

Jeff Guilford, owner of the manufacturer JJGuitars, says that rock guitarists find that steel strings, “deliver the cutting tone with the high output levels that they need”. Higher output results in a stronger signal being sent to the amplifier, and this, along with the type and strength of magnet, impacts on the tone a guitar produces. Stainless steel strings, which entered popular use in the 1960s, are known for giving guitars a clear, bright sound with plenty of sustain. They also last longer as they are corrosion-resistant. 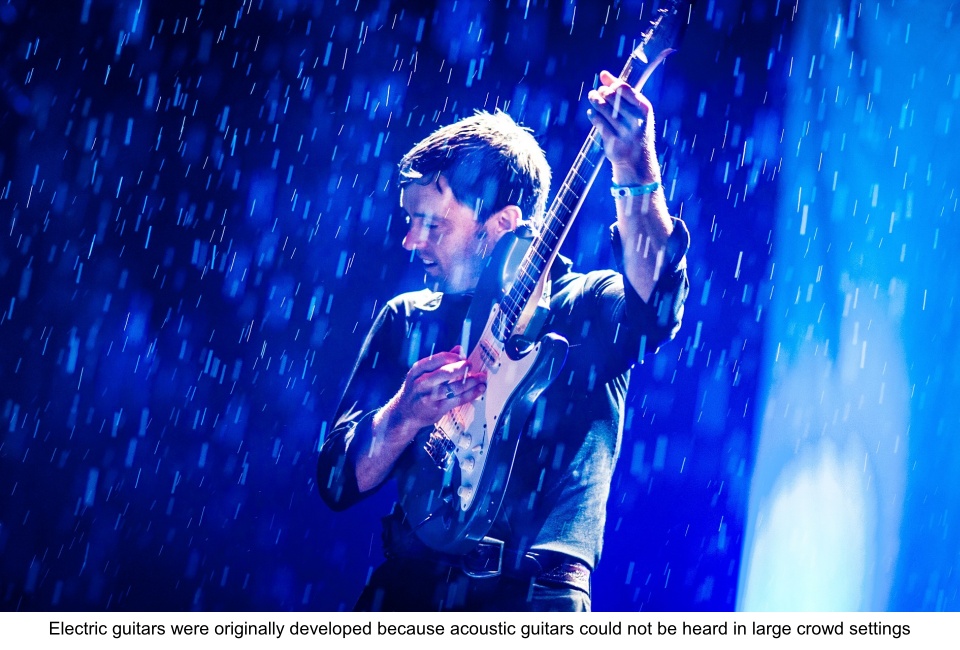 For maximum brightness, steel strings with hex cores are a popular choice. A hex core is a steel string with five sides, formed in a hexagon shape that can be wrapped in another material. The hex core produces a brighter sound while feeling stiffer to the player when compared with a normal round core string.

“The variety of electric guitar strings is now wider than ever, but the basic construction is the same as acoustic strings, with round or hexagonal core wires,” says Guilford. That variety includes steels called super-alloys which are used in the aerospace industry for high-stress applications. Known as Maraging steel, or just M-steel, strings made from this are said to offer a rich tone, beefy lows and hold their tune for longer.

From Buddy Holly, to The Rolling Stones, and modern bands like The Killers, a variety of differing musical styles all originate from a magnet and a lap-played steel guitar from the 1930s. Almost 90 years on, steel, whether in rounded or hexagon form, wrapped in nickel or made from stainless steel, continues to be at the beating heart of the instrument that changed music forever.

The original content published on the worldsteel’s ‘Our Stories’ section is available at: https://stories.worldsteel.org/innovation/steel-guitar-strings-pickup-rock-and-roll/