The world’s first international Hydrogen Iron & Steel Making Forum 2021 (HyIS 2021) hosted by POSCO ended after completing its three-day schedule. At the forum, global steelmakers, steel associations around the world, the companies of raw material supply, energy and engineering, and the representatives of government and international organizations gathered wisdom to speed up the shift to the hydrogen-based steelmaking technology method, which has emerged as a hot topic in the steel industry ahead of 2050 Carbon Neutrality (net-zero). Here we introduce the three days of heated discussion and unity that has gone beyond borders and specialized fields toward common goals.

HyIS 2021 conducted a keynote speech and policy • technology • collaboration sessions at the Grand InterContinental Seoul Parnas Hotel for two days from October 6 to 7, and a Pohang Works Tour on October 8, the last day. 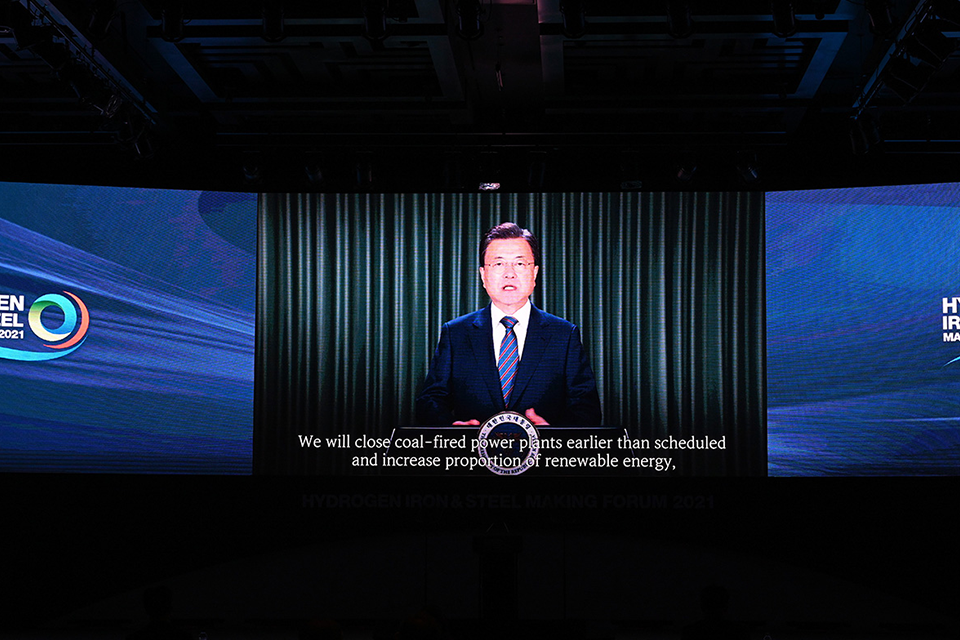 HyIS 2021 began with a congratulatory message by President Jae-in Moon on October 6, the first day. President Moon welcomed HyIS 2021 attendees through the video and emphasized the important role of steelmakers at an important starting point in human history of Carbon Neutrality. And he said that Korea will act first and cooperate with the world to lay the foundation for hydrogen ecosystems including hydrogen-based steelmaking technology and to overcome the climate crisis. 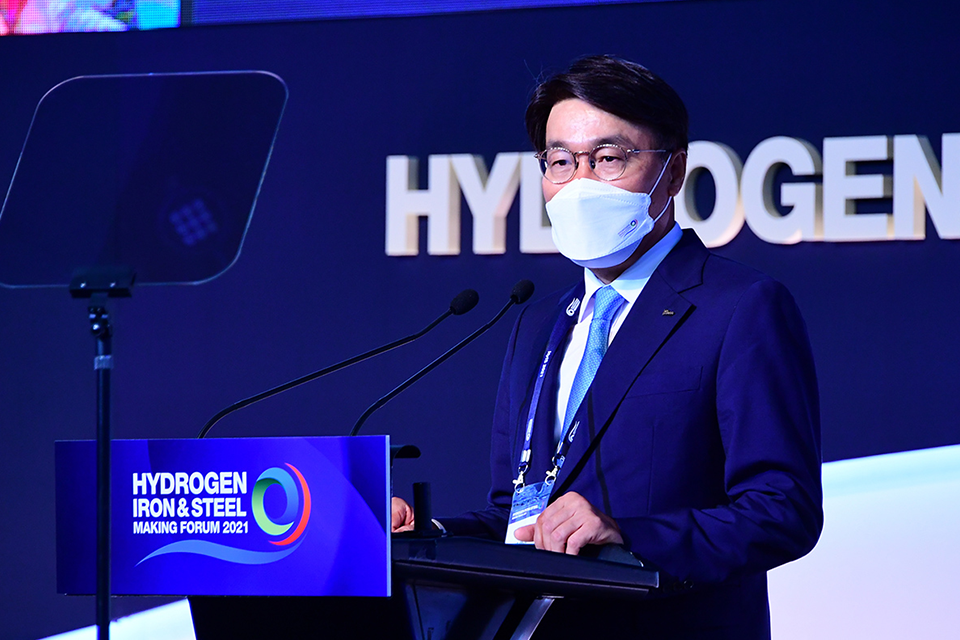 Then, in the keynote speech by CEO Jeong-woo Choi, he emphasized that iron is an eco-friendly material with lower carbon emissions per unit and higher recycling rates than other materials such as aluminum. However, he said steel plays a big role in Carbon Neutrality due to its enormous production compared to materials such as aluminum. And he added that as it takes a lot of money and time to make a breakthrough in hydrogen-based steelmaking technology, cooperation between steelmakers, support from the government and society are important and expect to gain momentum through this forum.

▲ Sung-wook Moon, a minister of The Ministry of Trade, Industry and Energy and Sung-hwan Kim, a member of the National Assembly (on the right) giving a congratulatory speech for the opening.

Sung-wook Moon, a minister of The Ministry of Trade, Industry and Energy and Sung-hwan Kim, a member of the National Assembly congratulated the start of HyIS 2021 and said that they would join the first step in the hydrogen-based steelmaking technology method which will change the fate of the Earth, including the establishment of hydrogen infrastructure and policy coordination in the steel industry. 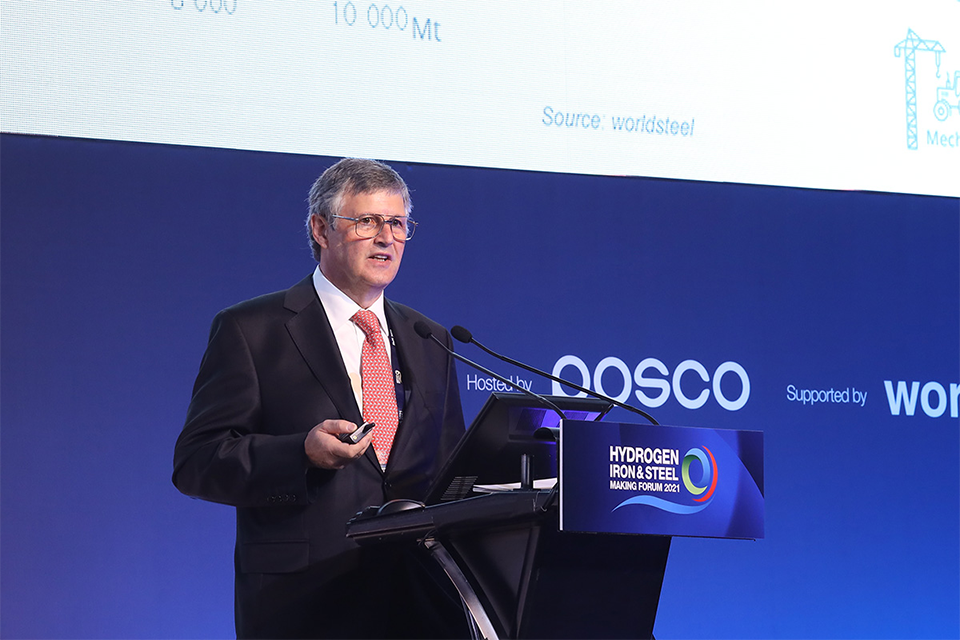 The keynote speech was given over two days by a total of eight speakers by sector, including the World Steel Association, the Australian government, steelmakers, and energy companies. The keynote speech began with Edwin Basson, the director general of the World Steel Association. Edwin Basson, the director general introduced the “Step-up Programme,” which has been in effect since 2019, saying that the steel industry, which accounts for about 7% of the world’s carbon emissions, should speed up the transition to low carbon in order to keep the global temperature rise within 1.5℃ since the 2015 Paris Agreement. The Step-up Programme consists of four stages including △ Improving raw material quality, △ Improving energy efficiency, △ increasing product yield, and △ improving process reliability. Edwin Basson, the director general said, “Let’s work together to achieve the goal of Carbon Neutrality through participation encompassing both inside and outside the industry.” 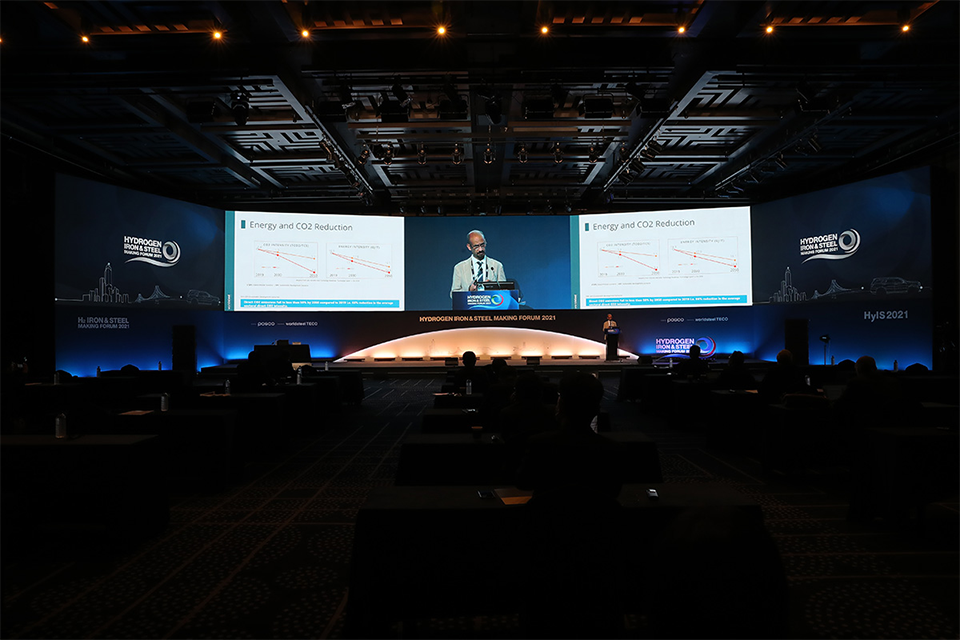 ▲ Janjua, Head of Technology at World Steel Association, who is in charge of the ‘Step-up Programme’ to reduce carbon emissions giving a keynote speech.

Rizwan Janjua, Head of Technology at World Steel Association is in charge of the Step-up programme introduced by the director general Basson. In his keynote speech on the 7th, he emphasized the importance of collaborations beyond the fields of the energy industry, investors, and policy makers and continuous investment and R&D to achieve technological breakthroughs, as the steel industry is a huge supplier and consumer at the same time and also a part of the industrial ecosystem. He said that open communication is more important, especially as resources and energy are geographically biased.

▲ Martin Wenguo Pei, a Chief Technology Officer of SSAB and Duk-lak Lee, Head of Technical Research Laboratories of POSCO (on the right).

Duk-Lak Lee, Head of Technical Research Laboratories gave a presentation on POSCO’s carbon neutral policy and HyREX (Hydrogen Reduction Steelmaking) technology. HyREX uses POSCO’s fluidized furnace technology accumulated through FINEX, so it uses the iron powder as it is, while SSAB’s HYBRIT is based on a direct reduction shaft furnace and uses iron ore processed in the form of pellets. Except that the two methods utilize the same principle of hydrogen reduction, their characteristics are clearly different. Duk-lak Lee, Head of Technical Research Laboratories took the time to find the implications for the difference in technology between the two companies, asking Pei, a Chief Technology Officer, which heating method is used to compensate for the heat loss in the hydrogen reduction reaction. 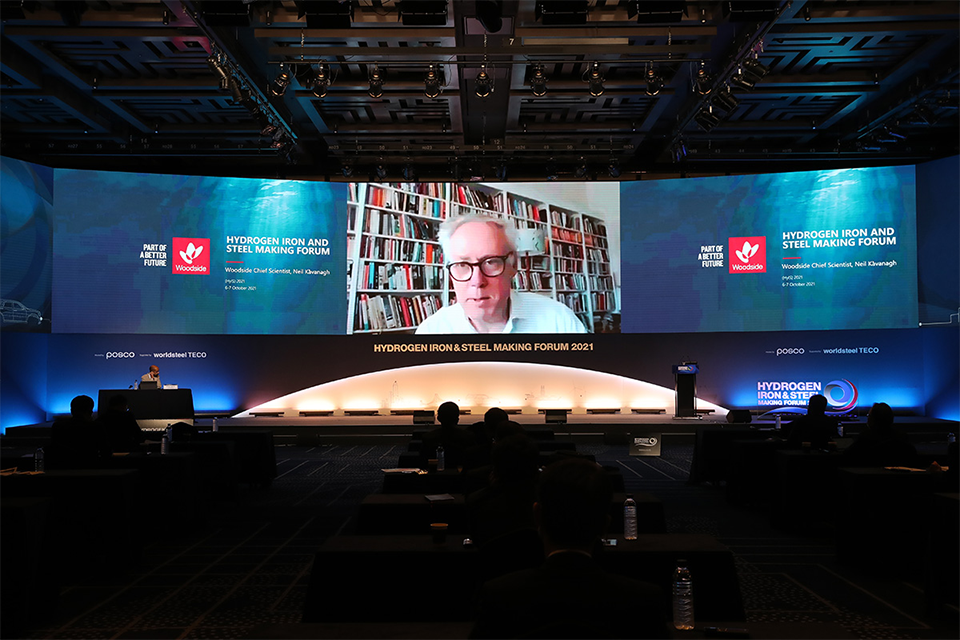 ▲ Neil Kavanagh, the Chief Scientist at Woodside Energy Ltd., emphasizing the urgent need to build enormous energy and infrastructure for production, transportation, and storage of hydrogen before the commercialization of the hydrogen-based steelmaking technology method

Regardless of the type of hydrogen-based steelmaking technology method, the common task to be solved is the enormous amount of energy and infrastructure required for the production, transportation, and storage of hydrogen. Alan Finkel, a Special Advisor to the Australian Government on Low Emissions Technologies, and Neil Kavanagh, the Chief Scientist at Woodside Energy Ltd., an Australian natural gas producing company, predicted the possibility in a keynote speech. Hydrogen is a high-density energy source that generates more energy than the same amount of petroleum, but there are many challenges such as the need to use renewable energy while excluding fossil fuels in the process of generating the power needed to electrolyze water and the need for special facilities and energy such as liquefaction processes for storage and transportation. And the two keynote speakers found a way to solve this challenge in close cooperation between industry and government like other speakers did.

The cooperative forum went into a detailed discussion and led to sessions by field. In order to comply with the COVID-19 quarantine guidelines, only a limited number of people were able to attend the scene, but people from various countries and at different time zones were able to freely present and ask questions through video conference. The speakers greeted the attendees with the greetings of the morning, afternoon, and evening at the time of their respective locations, presenting and discussing Policy, Technology, and Collaboration sessions through the screen at the HyIS 2021 site. 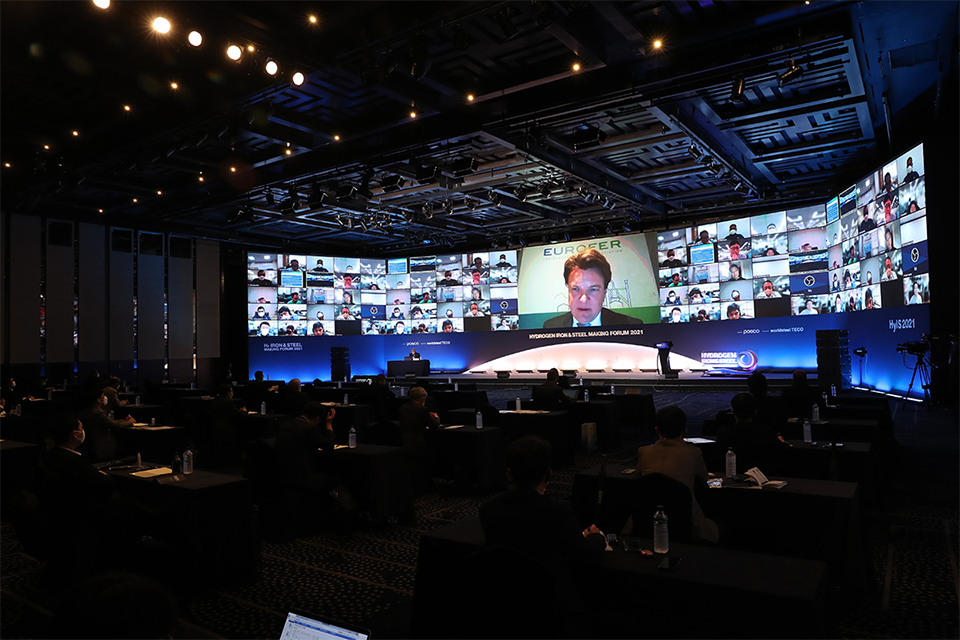 ▲ Axel Eggert, the Director General of the European Steel Association (EUROFER) explaining the carbon neutral policy of Europe and directions for countermeasure in the steel industry.

The Policy session was attended by the European Steel Association (EUROFER) and the Japan Iron and Steel Federation (JISF) to discuss carbon neutral policies in the steel industry of each country. They introduced policies that reflect the characteristics of each country and region, such as a European Green Deal*, Fit for 55*, and Japan’s declaration of the realization of a decarbonization society by 2050.
*Green Deal: European Union’s policy aimed at achieving Carbon Neutrality by 2050.
*Fit for 55: A plan to reduce the average carbon emissions of the European Union by 2030 to 55% of 1990 level. 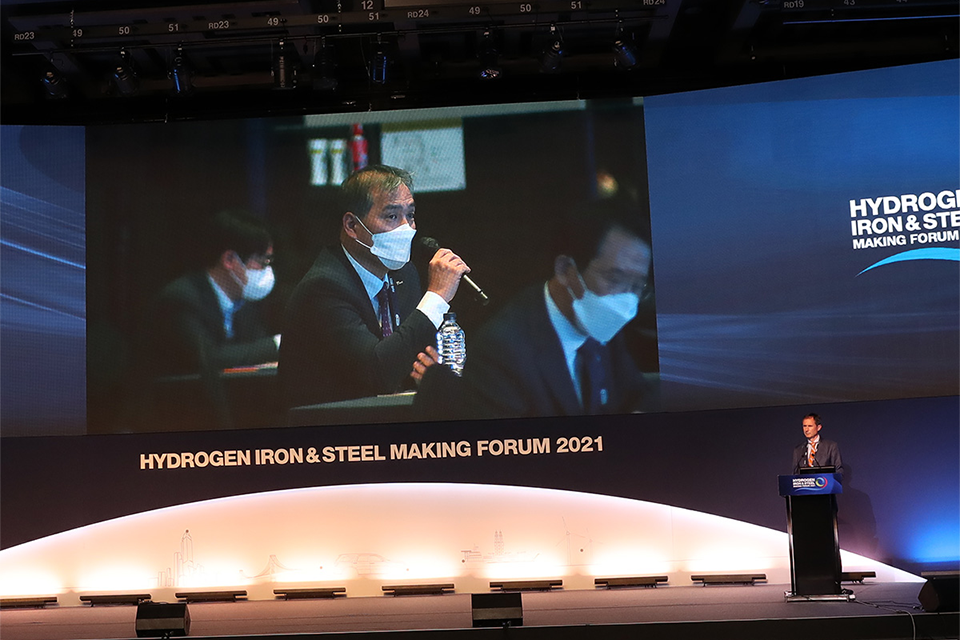 100% hydrogen-based steelmaking technology is a future that has yet to come and steelmakers are applying a method of improving the efficiency of existing methods and incorporating new technologies based on their know-how and strengths. Therefore, in the Technology session, they had time to meet the current status of steelmakers’ efforts to reduce carbon emissions. 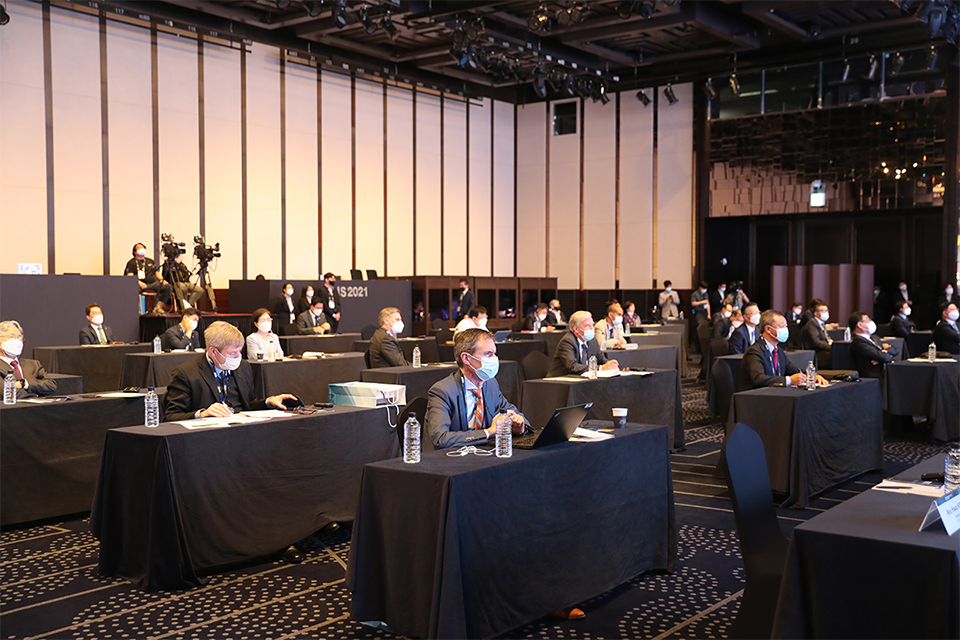 In the transition period to hydrogen-based steelmaking, the common points that steelmakers are paying attention to are the increase in the use of scrap to reduce carbon emissions and the increase in the proportion of electric furnaces. However, while global steel demand is expected to increase, electric furnace alone is not enough. The steelmakers said that they are operating a roadmap to reduce carbon emissions by mixing various methods such as △ Development of Carbon Capture, Utilization and Storage (CCUS) △ Development of water electrolysis separator technology △ Investment in own renewable energy infrastructure △ Carbon recycling by replacing carbon dioxide generated in the blast furnace with methane and reusing it as a reducing agent △ Development of alternative reducing agents such as biomass △ Improving manufacturing efficiency through the establishment of an in-house carbon asset management organization and digitalization. 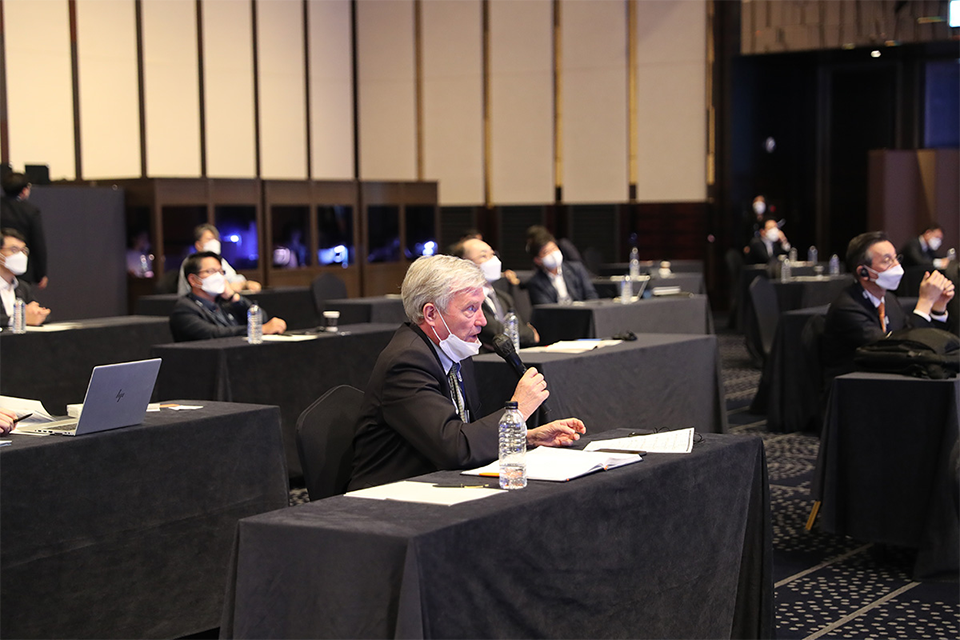 In the last Collaboration session, expert discussions on steel technology and market prospects were held. They shared opinions on the current status of hydrogen-based steelmaking technology, factors for commercialization, and products, markets, prices, and government policies and support after 2050 Carbon Neutrality.

On October 8, the last day of the schedule, POSCO as the organizer of the forum invited the attendees to Pohang Works. The attendees visited the FINEX process which was the basis of POSCO HyREX technology and the POSCO History Museum to meet the path that POSCO has taken and the path to walk for Carbon Neutrality by 2050.

From October 6th to 8th, the big run of the international Hydrogen Iron & Steel Making Forum 2021 (HyIS 2021) finished with a big success. Although it was difficult to gather in one place due to COVID-19, it was a meaningful time for various discussions to be held for the common goal to achieve Carbon Neutrality among steelmakers around the world, and we hope POSCO and other steel experts around the world will continue to pursue a common goal.