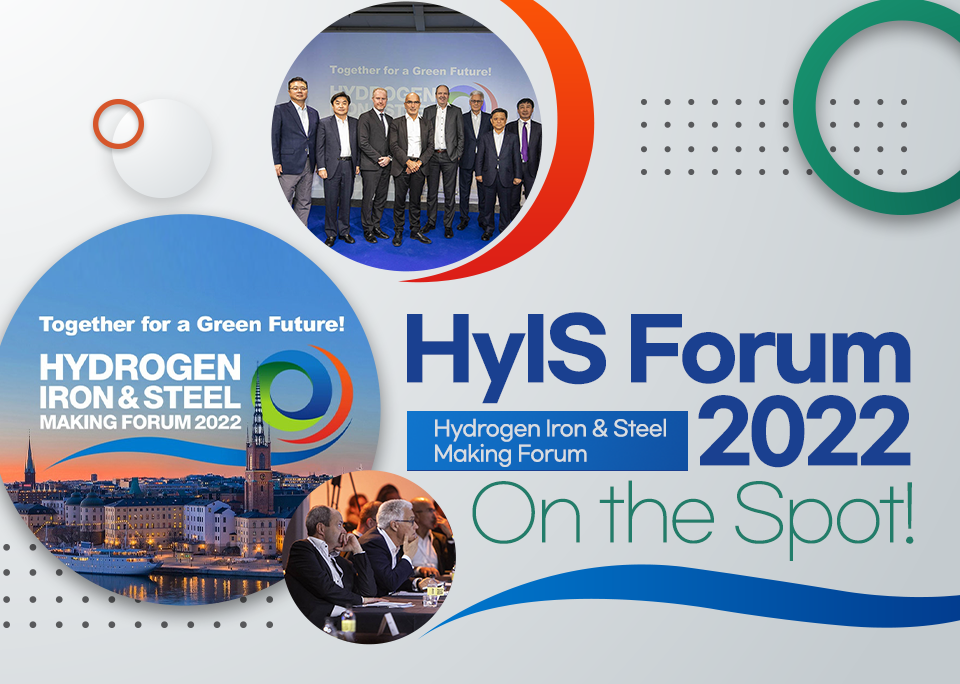 POSCO held the Hydrogen Iron & Steel Making (HyIS) Forum 2022 jointly with the Swedish steelmaker SSAB.
A total of 150 people participated in the forum held in Fotografiska, a photo exhibition hall in Stockholm,
on Oct. 12 and 13, and about 1,300 people online. We can see the hot spot where people gathered with passion
to make the world we live in clearer and cleaner in photographs. 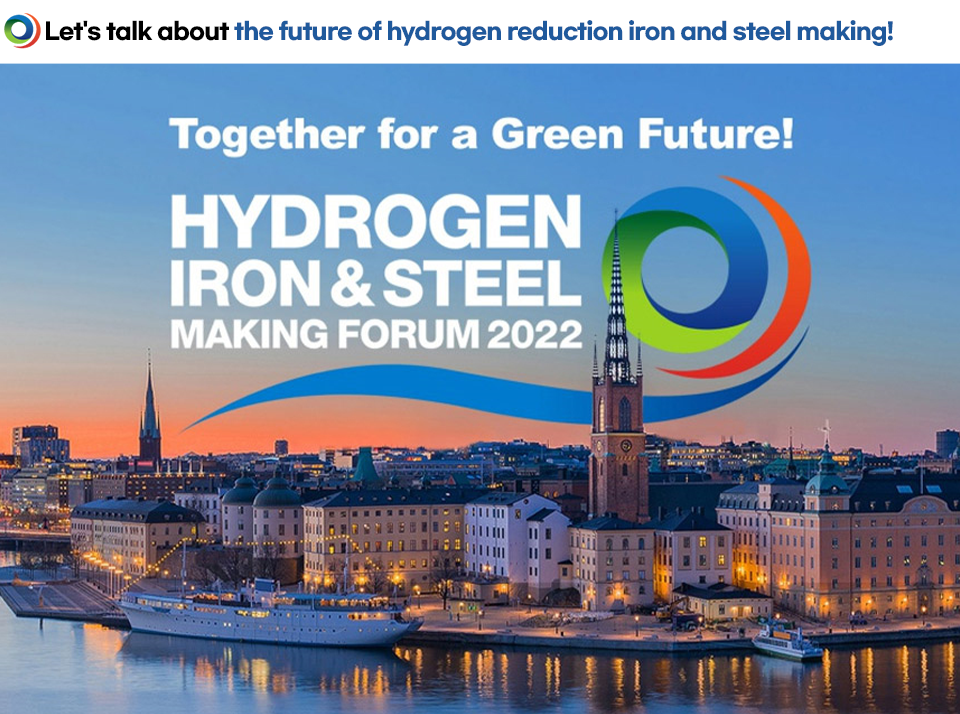 The HyIS Forum, which was held in Seoul last year, took place in Sweden this year. SSAB, a Swedish steel company founded in 1978, produces one ton of hydrogen reduction iron an hour with the world’s first shaft-type hydrogen reduction steelmaking pilot facility. This forum was held jointly after CEO Jeong-woo Choi met with Swedish Ambassador to Korea Daniel Bolven to propose co-hosting the event in February.

▲ The Fotografiska photo exhibition hall (left), in Stockholm, Sweden, where the HyIS Forum was held, and a ferry, a major means of transportation in Sweden

The HyIS Forum was held in Stockholm on the east coast of Sweden. This is an “island city,” with a central area consisting of 15 islands. Since 30% of the city is connected by waterways, the main means of transportation is ferries. Forum participants also arrived at the venue by ferry.

People are entering one after another at Stockholm’s famous photo exhibition hall, Fotografiska. Fotografiska is in a four-story red brick building that was renovated from an old customs office, and is a photographic exhibition hall filled with a simple yet sensuous Nordic sensibility. The HyIS Forum, which shared future technologies that accelerate hydrogen reduction iron and steel making, was held here. 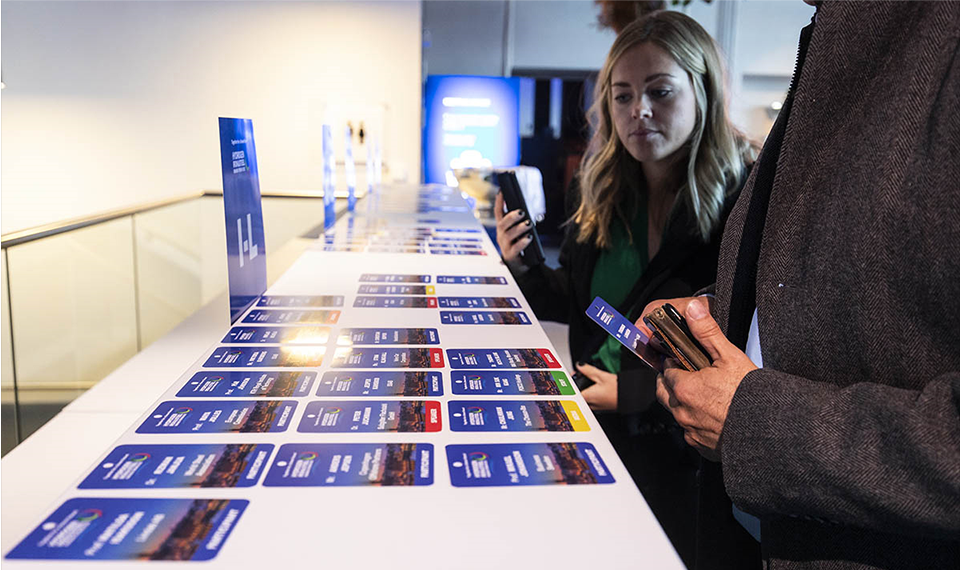 ▲ The companies participating in the HyIS Forum register to participate.

First, SSAB Chairman Martin Lindqvist announced the opening of the forum with a welcome address.

Chairman Lindqvist said “Nobody believed hydrogen reduction steelmaking was possible, but we developed and produced steel that we did not use fossil fuels for. By commercializing and delivering it to customers,, they could also supply carbon-free products to end users, and they are responding very well. Change is difficult, but we have to continuously make efforts for the next generation.” Next, POSCO Vice Chairman & CEO Hag-dong Kim, greeted the opening ceremony, saying, “I just want to thank everybody here today.” 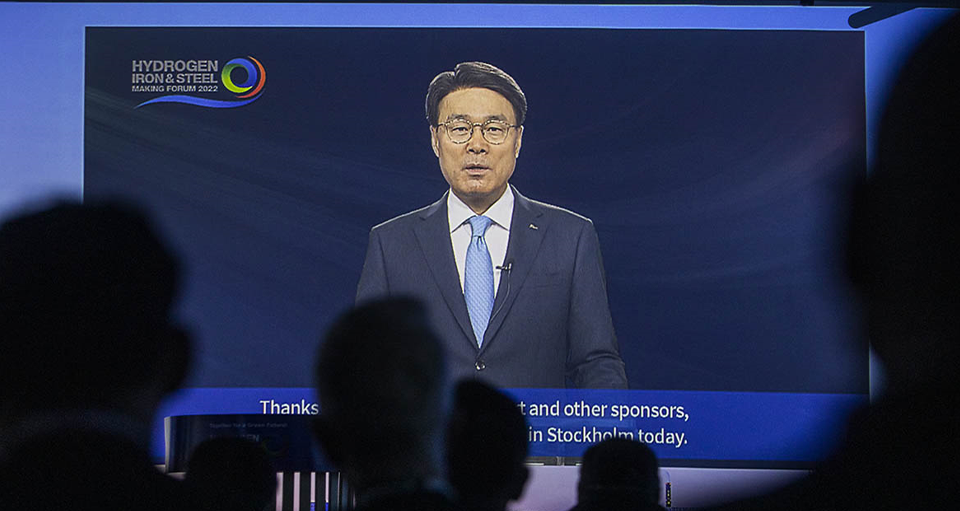 Next, POSCO Group CEO Jeong-woo Choi gave an opening speech by video. Forum participants concentrated on the message of CEO Choi. CEO Choi said in his opening speech, “No one can solve common problems of humanity faced by the international community, such as climate response, without solidarity and cooperation.. Everybody knows the key to solving the carbon emissions problem in the steel industry is hydrogen reduction steelmaking, but it is a very challenging goal, and we cannot achieve it if we go it alone. If everyone here agrees to go on that path together, the era of net-zero carbon emissions will be accelerated, and mankind will once again leap forward and move toward a better future.” 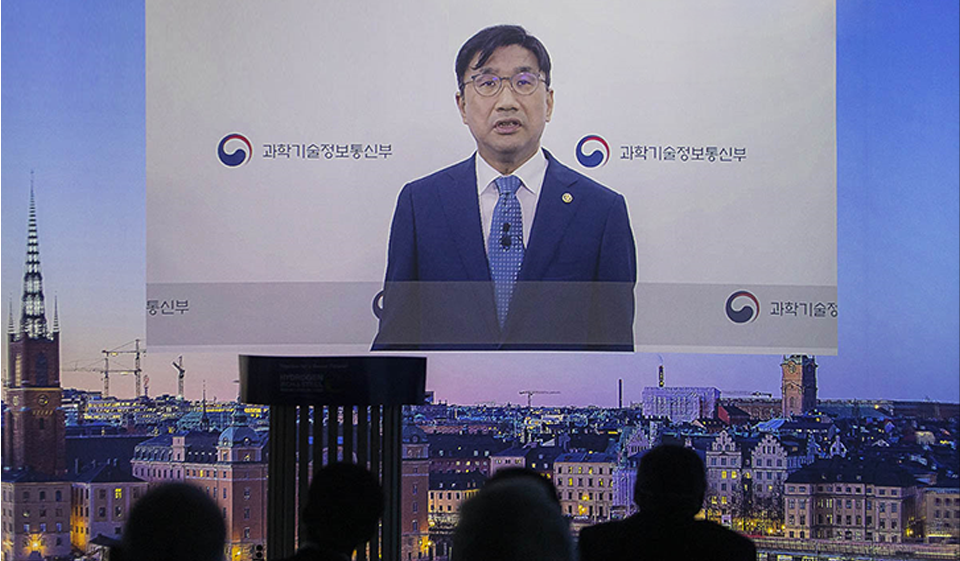 ▲ Video congratulatory message by Young-chang Joo, head of the Science, Technology and Innovation Headquarters of the Ministry of Science and ICT

Vice Minister Young-chang Joo of the Science, Technology and Innovation Headquarters of the Ministry of Science and ICT, sent a congratulatory message. ”The Korean government will actively support carbon neutrality technology innovation by companies and play a responsible role for mankind to live a safe life from climate change. I hope the HyIS Forum, in which steel experts all over the world gather and discuss hydrogen reduction steelmaking technologies and policies, will be the global pivot that leads to the realization of net-zero carbon emissions in the steel industry,” he said.

Along with Young-chang Joo from the Ministry of Science and ICT, Mattias Frumerie from the Swedish Ministry of Environment, Kimmo Viertola, secretary general of the Finnish Government Ownership Steering Department, Tae-youk Ha, the Korean ambassador to Sweden, and Edwin Basson, secretary general of the World Steel Association (WSA) congratulated the attendees on the successful holding of the forum, and hoped for cooperation and global solidarity between value chains to accelerate hydrogen reduction steelmaking.

Also, SSAB CTO Martin Pei, presented the roadmap of HYBRIT technology development and the future vision. SSAB produces one ton of hydrogen reduction iron an hour with the HYBRIT facility and succeeded in the first mass supply of green steel and supplied it to Volvo Group. 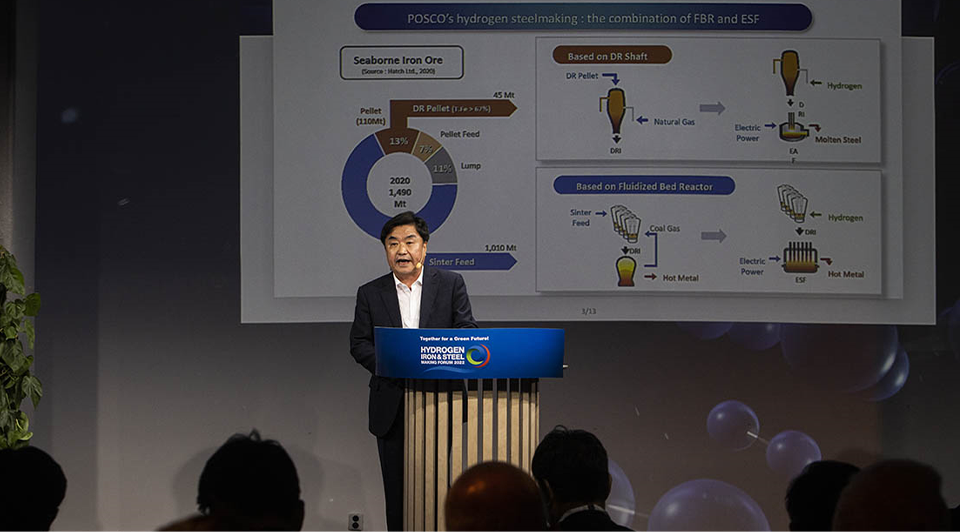 Joo explained POSCO’s HyREX technology that produces molten metal using fine iron ores and hydrogen and the HyREX R&D partnership. HyREX technology uses fine iron ores directly without processing, and so the range of usable iron ore is larger and more economical than the shaft furnace method that uses pellets. Joo explained the excellence of HyREX, whose demo plant was designed in August this year and announced a plan to form an R&D partnership. He also announced that POSCO will promote joint technology development with steelmakers, raw material companies and engineering companies. 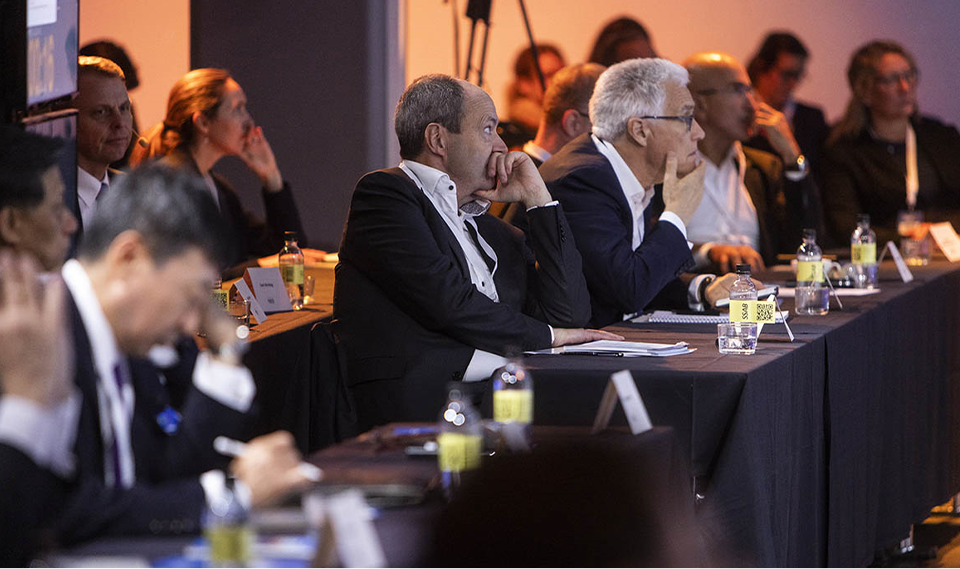 ▲ Martin Lindqvist, chairman of SSAB, and Lord Adair Turner, chairperson of the ETC, listen to the announcement.

This forum was innovative and broke the forum framework. The forum was in the form of “many-to-many discussions” to ask and answer questions with the host, away from the existing simple “one-to-one presentation.” Officials from related organizations were invited to the podium to ask questions and discuss with the host.

They introduced the carbon neutrality and hydrogen reduction steelmaking strategy of each steelmaker and answered questions from the host and audience. The panelists in the customer companies’ session held up cards to answer the host’s multiple choice questions and explained why. In addition, various organizations, including △ the Carbon Neutral Initiative, △ raw material companies, △ energy companies, △ hydrogen companies, △ engineering companies, △ SSAB R&D Center, △ Korea University, and △ Carnegie Mellon University, participated in the forum and gave extensive presentations and debated net-zero carbon emissions in the steel industry. Meaningful communication was achieved by selecting questions from online as well as on-site participants and giving them to the panel participants.

The forum format was somewhat unfamiliar, but it was well received that different speakers could hear different opinions on common questions in one place, and that speakers and audiences could communicate in various forms to hear more vivid voices on the scene. 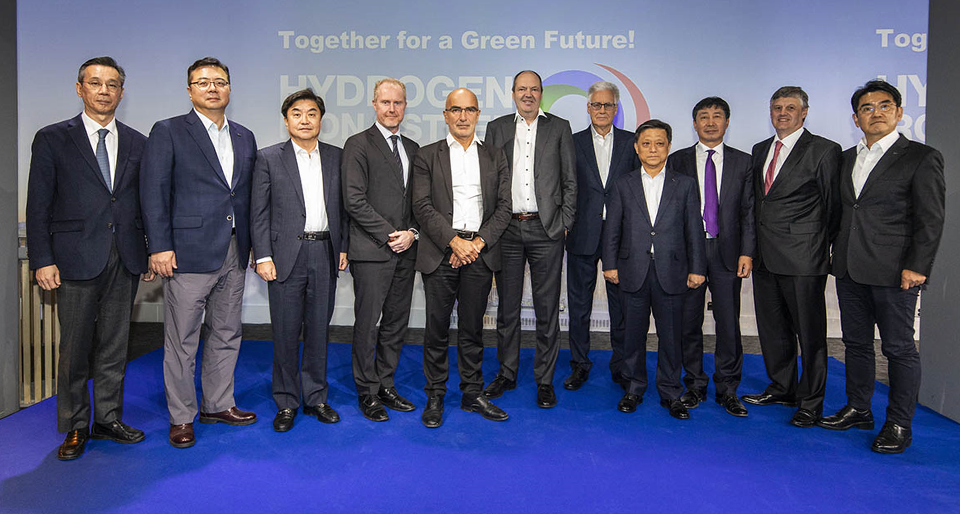 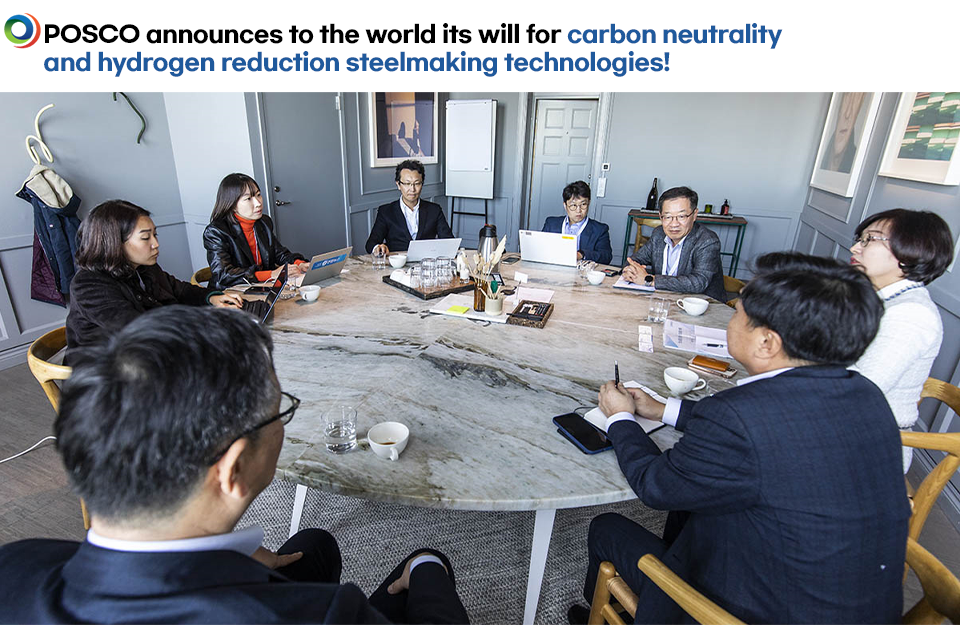 POSCO held a press conference and invited Korean press correspondents in Europe. In the conference, Se-don Joo, head of POSCO R&D Center, Hee Kim, an executive responsible for the Carbon Neutrality Strategy, and Jin-woo Park, an executive responsible for the PR of POSCO Holdings, participated and introduced the excellence of POSCO’s hydrogen reduction steelmaking technologies and the significance of the HyIS Forum.

▲ Industry officials have a business meeting in the exhibition halls of products and technologies of POSCO and SSAB.

During each coffee break time between sessions, the forum participants held a business meeting in the exhibition halls of products and technologies of POSCO and SSAB and shared industry trends. SSAB’s product exhibition hall featured the world’s first fossil-fuel-free iron and green steel. 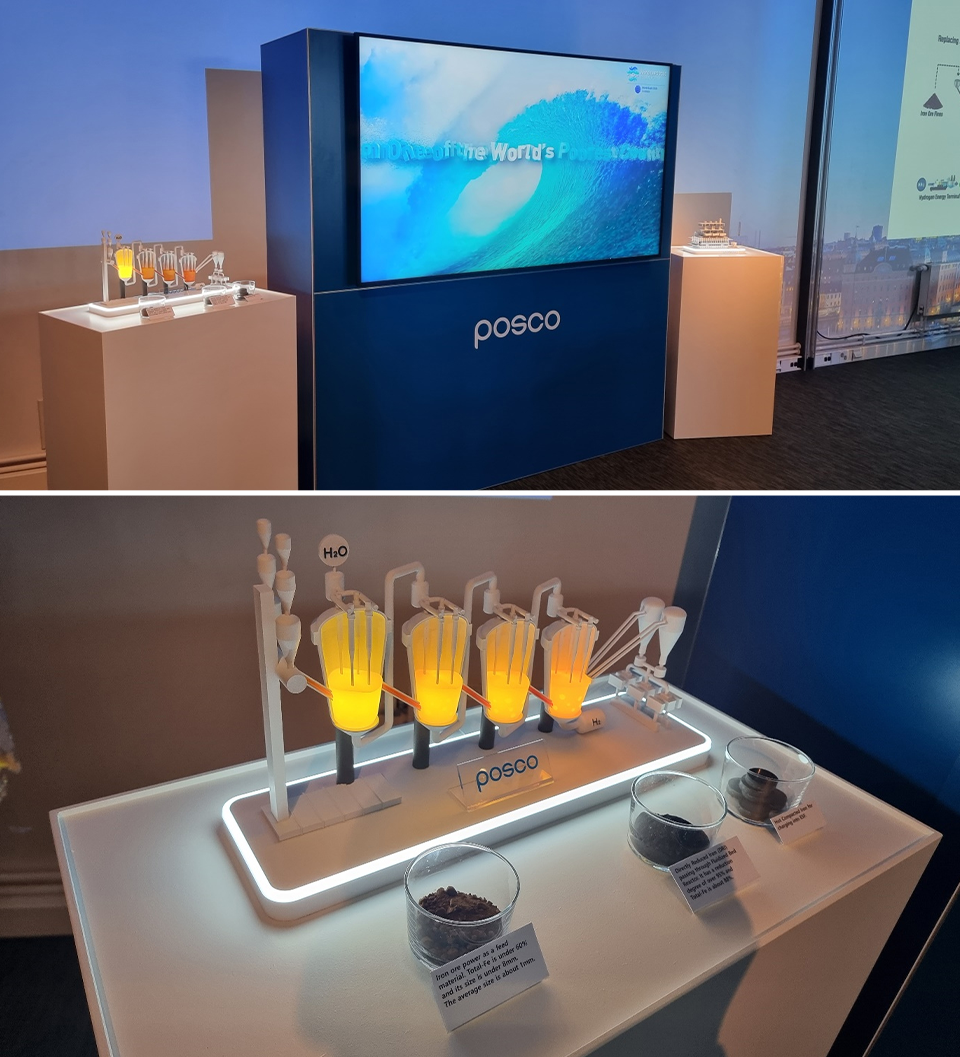 In the exhibition hall of POSCO products, the HyREX model was exhibited and a video that publicized hydrogen reduction steelmaking technology and green products was shown on a large screen, introducing POSCO’s carbon neutrality policy and vision in detail.

The enthusiasm for hydrogen reduction steelmaking continued even after the forum ended. On October 14, several forum attendees visited SSAB’s HYBRIT plant in Lulea. The participants who visited the plant where products were produced 100% using green electricity and green hydrogen continuously expressed admiration.

The HyIS Forum, which announced to the world POSCO’s will for carbon neutrality and technologies in Europe, which led the carbon neutrality trend, was very heated. POSCO will not stop on the way to net-zero carbon emissions and will expand global cooperation.

※ This content was produced based of the contents of POSCO Today, an integrated communication channel of POSCO.