The Iron Age of Civilization

Eras of human civilization and world history are split into three periods: ancient, post-classical (also known as medieval or the middle ages) and modern. The Iron Age is the third principal period for classifying ancient societies and prehistoric stages of progress. The ancient periods of world history are characterized by available materials used in tools for hunting, agriculture and weaponry. The first period of the ancient period is the Stone Age, followed by the Bronze Age. The Iron Age generally follows the Bronze Age, although some societies went from the Stone Age straight into the Iron Age. Iron production is known to have taken place as early as 1200 BC, though new archaeological evidence suggests even earlier dates.

From Bronze to Iron 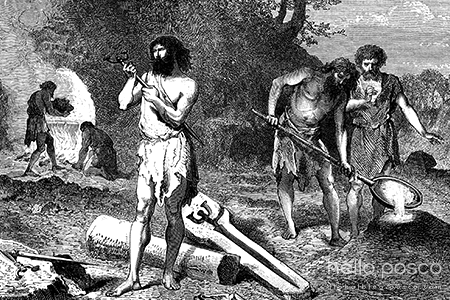 The adoption of iron and steel directly impacted changes in society, affecting agricultural procedures and artistic expression, and also coincided with the spread of written language. In historical archaeology, the earliest preserved manuscripts are from the Iron Age. This is due to the introduction of alphabetic characters, which allowed literature to flourish and for societies to record historic texts.
The beginning of the Iron Age differs from region to region. It is characterized by the use of iron in tools, weapons, personal ornaments, pottery and design. The differences from the preceding age of bronze were due to more advanced ways of processing iron. Because iron is softer than bronze, it could be forged, making design move from rectilinear patterns to curvilinear, flowing designs. 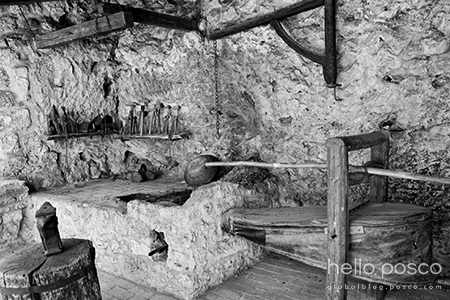 Iron smelting is much more difficult than tin and copper smelting. These metals and their alloys can be cold-worked, but smelted iron requires hot-working and can be melted only in specially designed furnaces. Iron fragments found in present day Turkey (c. 1800 BC) show the use of carbon steel. These iron fragments are the earliest known evidence of steel manufacturing.
It is believed that a shortage of tin forced metalworkers to seek an alternative to bronze. Many bronze objects were recycled into weapons during this time. The widespread use of the more readily available iron ore led to improved efficiency of steel-making technology. By the time tin became available again, iron was cheaper, stronger and lighter, and forged iron replaced bronze tools permanently.
During the Iron Age, the best tools and weapons were made from steel, particularly carbon alloys. Steel weapons and tools were nearly the same weight as those of bronze, but much stronger. 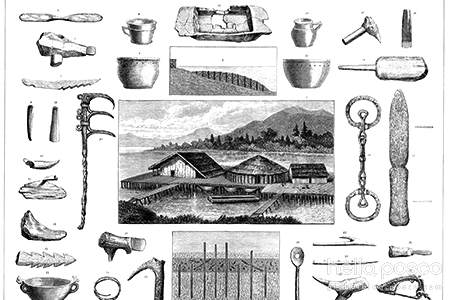 Before the Industrial Revolution, which would take place centuries later, the majority of people lived an agrarian lifestyle. Most people were farmers, and their lives revolved around the farming seasons. Societies consisted of villages where communities of families worked the land and made necessities for living by hand. All essentials were made or grown locally.
The production of iron tools helped make the farming process easier and more efficient. Farmers could plow tougher soil, making it possible to harvest new crops and freeing time for more leisure. New varieties of crops and livestock were introduced at different times over the span of the Iron Age.
More time also meant that people could make extra supplies to sell or exchange. Some farming families spent part of their time making salt, quern stones or iron. Most settlements have evidence of making clothes, woodworking and even blacksmithing.
Iron has been enhancing the quality of life for centuries. As more advanced technologies for processing iron were discovered, the world would experience the most rapid period of growth.

Just as civilizations experienced rapid advancement during and after the Iron Age, the fourth industrial revolution of today is changing the dynamics of markets and industries. Find out more about how companies should adapt and capitalize on the change, including steel companies.