The future of the hydrogen industry and POSCO’s challenge

Last year, POSCO declared to achieve ‘Carbon Neutral’ by 2050. While responding to climate change has emerged as mankind’s biggest challenge, POSCO’s expression of its willingness to lead carbon neutrality is a groundbreaking declaration considering the characteristics of the steel industry, where carbon emissions are inevitable with current technology. In particular, it seems a very challenging goal to officially announce the carbon neutrality plan for the first time as an Asian steel company based on a large furnace production system. However, carbon neutrality to cope with the global climate crisis is becoming a global norm, and it can be an advantageous strategy to actively deal with it rather than passively. Countries around the world, including Europe, the United States, Japan, and China, have already declared carbon neutrality by the mid-2100s and have begun to establish specific policies. Korea also declared a national vision of 2050 carbon neutrality last year and is currently preparing practical strategies and measures.

From the standpoint of the steel industry, which consumes a lot of energy, the strategy of aiming for carbon neutrality by using green hydrogen (hydrogen produced using only renewable energy) is considered challenging but meaningful. POSCO, a representative steel company in Korea, declared its vision of in December last year, which aims to establish a 5 million-ton hydrogen production system by 2050 to pioneer the hydrogen business, future clean energy with the meaning of leading the era of decarbonization.

POSCO has begun to proceed with measures to implement this vision. Last year, POSCO decided to cooperate with Australian iron ore company FMG in the green hydrogen business using renewable energy, and starting this year, POSCO decided to sign a business agreement with a leading domestic research institute for the promotion of research cooperation in the hydrogen field to secure hydrogen business capabilities in earnest. POSCO then signed an MOU with Orsted, Denmark, the world’s No. 1 offshore wind power company, to supply steel materials needed for the construction of an offshore wind farm and to participate in the production of green hydrogen using wind power, while preparing for the establishment of Korea H2 Business Summit with Hyundai Motor Company, SK, and Hyosung Group in which domestic companies participate.

l Hydrogen industry is inseparable from the steel industry

The reason why POSCO is so active in the hydrogen industry is that hydrogen is closely related to the steel industry. First of all, in the production sector, POSCO currently has an annual production capacity of 7,000 tons of hydrogen using byproduct gas (COG) and natural gas generated from the coke manufacturing process and extracts about 3,500 tons of byproduct hydrogen to control temperature and prevent oxidation during steel production. In the long run, it is developing a technology to commercialize the ‘hydrogen reduction steel’ method, a steel production method that does not emit carbon. This technology is a dream technology that no other steel company in the world has commercialized, and POSCO has already commercialized FINEX technology, the closest independent steel-making technology to hydrogen reduction steel, and has been operating it stably for nearly 15 years.

The FINEX method uses 25% of the reducing agent as hydrogen. Based on this advanced technology, POSCO plans to develop hydrogen reduction steel by gradually increasing the hydrogen concentration of the second fluidized reduction furnace in operation. 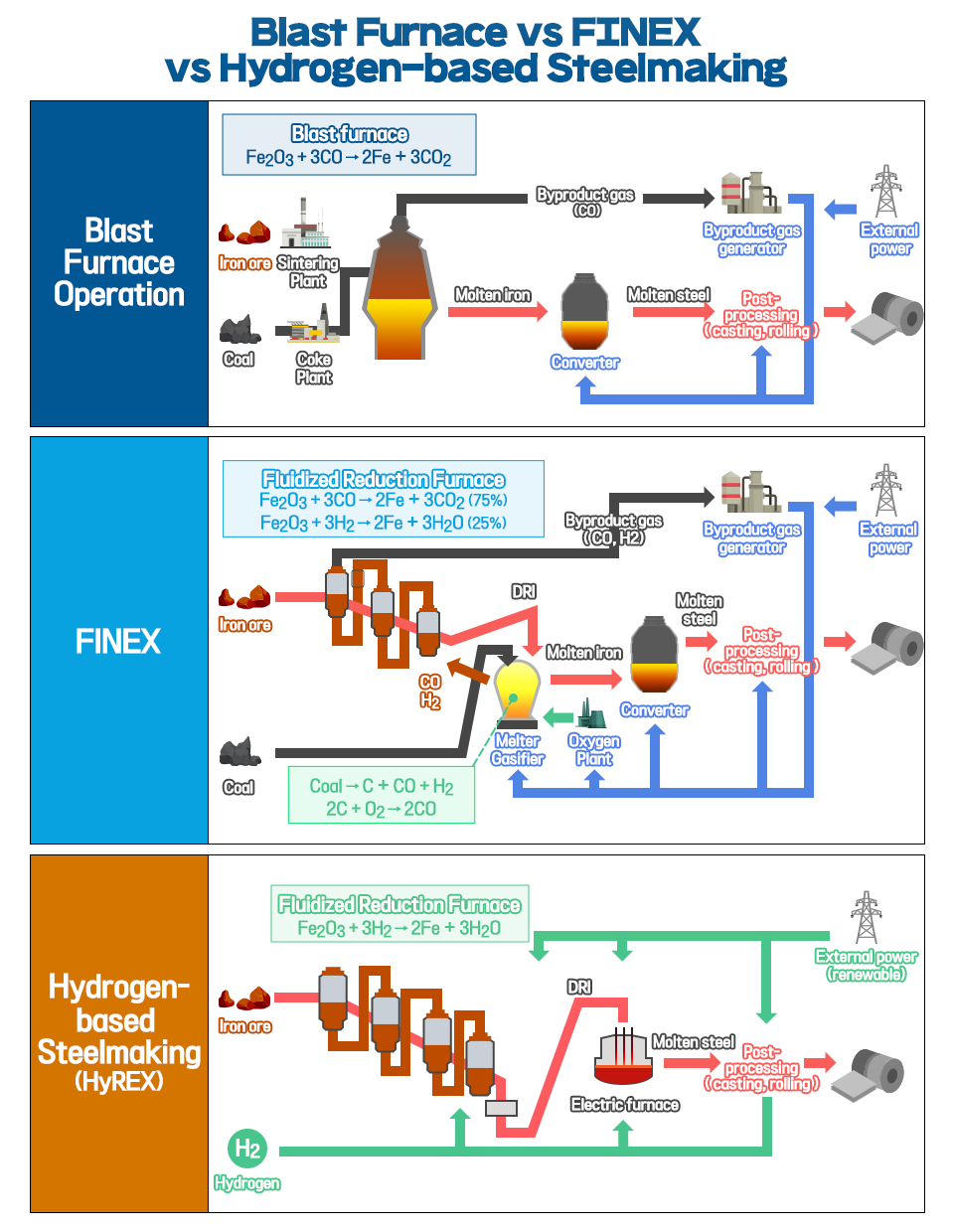 Meanwhile, the hydrogen industry becomes a new demand for special steel materials. Development and supply of steel materials suitable for each application are important for the development of the hydrogen industry, such as special high-pressure steel pipes for hydrogen transport, cryogenic steel for liquefied hydrogen storage, water electrolysis separator and fuel cell separator with excellent corrosion resistance and conductivity, and special steel with excellent corrosion resistance for the offshore wind power generator. POSCO has developed the world’s first steel product for hydrogen fuel cell separators and has the capabilities necessary for hydrogen production and use, such as supplying it to hydrogen vehicles produced in Korea.

▲ A Fuel Cell Separator made with POSCO stainless steel, Poss470FC, on display at POSCO’s booth at the North American International Auto Show in 2016.

For carbon neutrality, it is also important to develop hydrogen-using technologies such as hydrogen-based steelmaking technology and to stably secure green hydrogen that does not emit carbon at an appropriate price. Hydrogen is abundant enough to account for 75% of the mass of the universe, but hydrogen gas is very rare on Earth. Therefore, humans extract and use hydrogen from easily available compounds containing hydrogen atoms, that is, water (H2O) or fossil fuels. It is inexpensive to produce hydrogen from fossil fuels which are hydrocarbon compounds, but it inevitably generates carbon dioxide (CO2), and Carbon Capture and Storage (CCS) technology is required to remove the carbon dioxide. CCS is still expensive, and it is not easy to secure storage places in Korea where the land area is small. 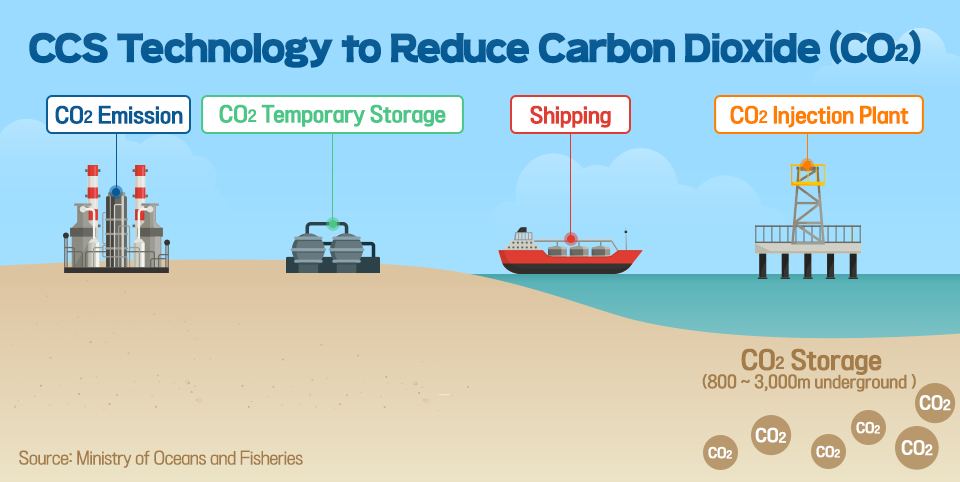 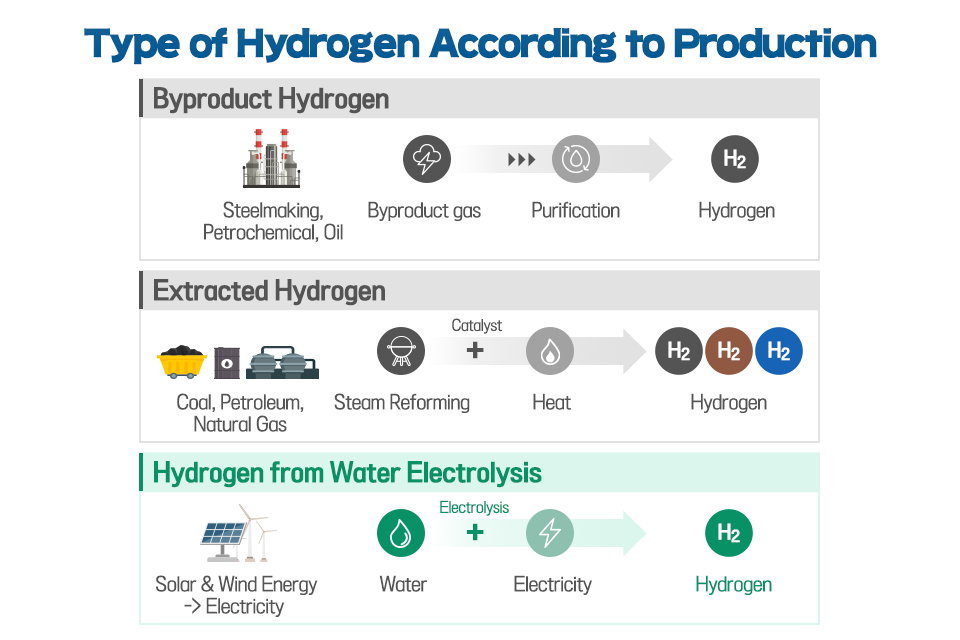 In order to economically secure green hydrogen or blue hydrogen that does not emit carbon, it is necessary to actively consider ways to secure it abroad where production cost is low. According to recent research, it is expected that hydrogen will be produced inexpensively in Australia, the United States, and the Middle East, where the land area is large and natural conditions are good. The ways are to import hydrogen from these regions or by directly investing in renewable energy generation and hydrogen production. Liquefaction is essential to reduce the volume of imported hydrogen, and the method of converting it into ammonia is now known as the most economical method. POSCO’s recent efforts to secure hydrogen business capabilities including the development of eco-friendly ammonia application technology, seem appropriate.

▲ The forecast for green hydrogen trade in 2050 according to countries. (Source: Bloomberg NEF, Hydrogen Economy Outlook, 2020.3.30)

l The necessity of Public-Private cooperation to realize carbon neutrality

There is a limit to secure and utilize green hydrogen for the realization of carbon neutrality only by the efforts of some companies. An industrial ecosystem should be established for each value chain of hydrogen production, distribution, and consumption, and the government’s leading role is important in the beginning. The government needs to actively expand hydrogen-related R&D investments and provide incentives such as tax reduction for private R&D investments. In addition, the government should provide supporting plans rather than regulations to facilitate transactions between hydrogen-related companies and establish a supply infrastructure for green hydrogen and low carbon power and a flexible market system.